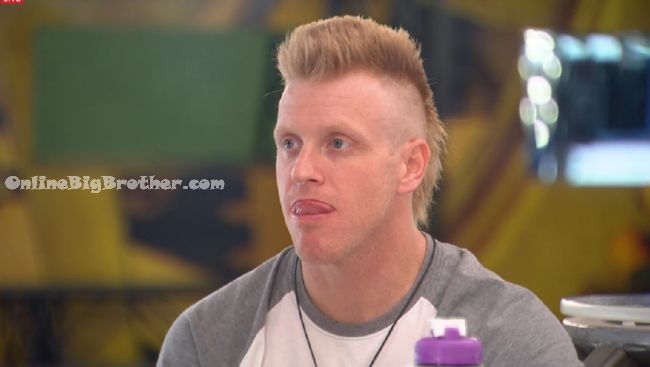 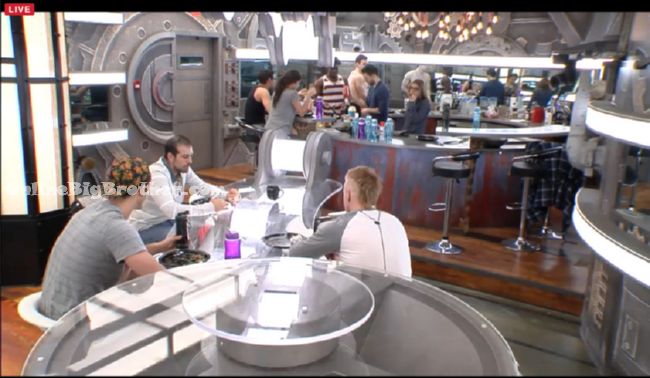 9:10pm Graig and Godfrey (Sounds like Graig knows he’s going home)
Graig- I’ll help you out before I leave.. I’m looking out for you bro.. it’ll be a nice exit.
Graig tells him he’s got something planned for tomorrow and for Godfrey to listen closely .. “it’ll be professional.. enough of this high school summer school”
Graig – “This is ridiculous this isn’t even big brother.. enough of this bro” 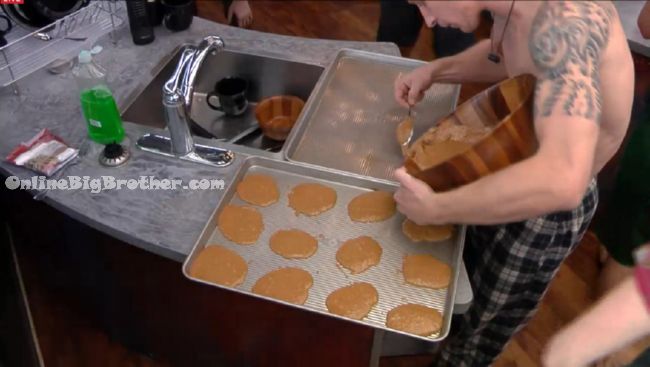 9:24pm Bobby making slop cakes
In the background all sorts of conversations are going on..
Sarah is telling them about dental dams and how expensive they are “$12 bucks”

Zach, Bruno, Jordan and Kevin are talking about Risha. Zach mentions if Sindy, Naeha and Risha were in the house there would have been some MASSIVE fights they were all very strong personalities.
Kevin tells them about hearing the girls in the HOH talking game, “Best sh1t in my life.. it was a 3 or 4 minutes conversation”
Kevin – “Naeha and Sindy.. just stunned.. i as like nice conversation ladies”
Bruno – like a boss 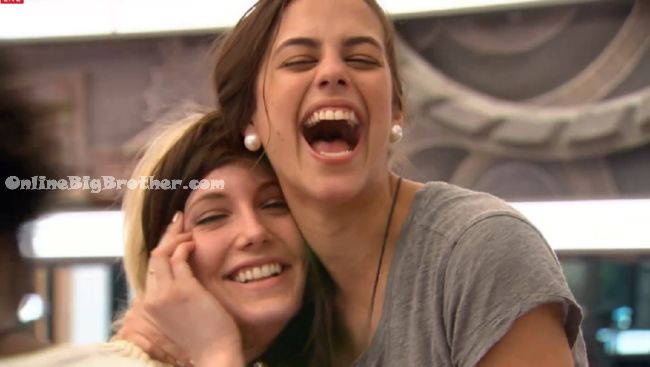 10:02pm Sarah makes Brittnee a drink. Tells her “Its mostly water”
Godfrey tells them a story about his first time drinking when he was still in school.. His grandma was looking after him and found out gave him a beating “She got out the cooking stick” Johnny and Bruno chime in about their parents chasing them down.

10:24pm Kitchen chit chat continues.. Brittnee says she’s had 3 shots “I feel warm” Sarah says she’s had 1 shot. Zach is talking about sports in Regina. He mentions Hockey and Football use to have brutal hazing rituals so bad that people would become emotionally scared and quit. He doesn’t want to even say some of the things people use to do. Points out that it’s not like that anymore and wasn’t when he started. 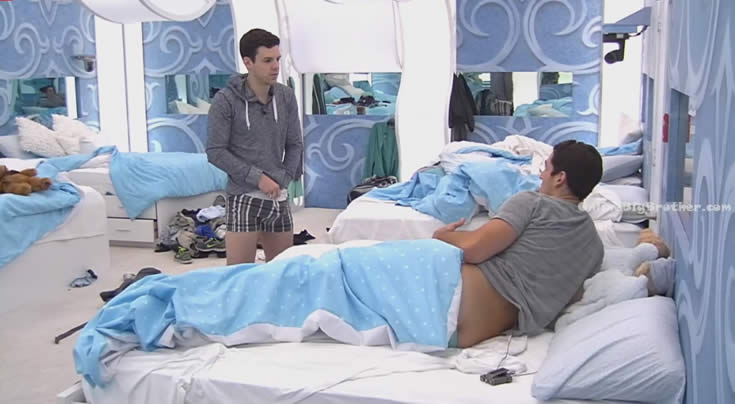 10:36pm Bedroom Kevin and Zach
Zach saying they are sitting good with both sides adds that only Zach, Kevin and JP really talk together. Pilar barges in. 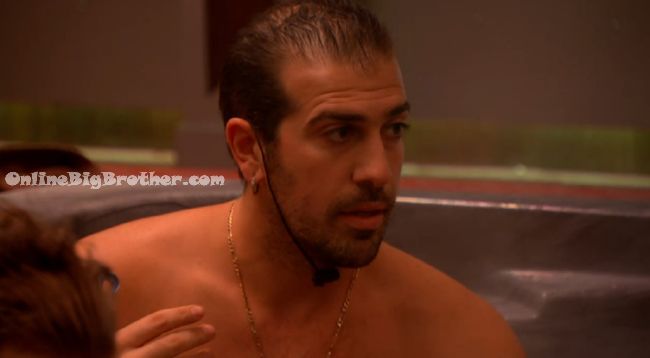 Talking about the vote being a sweep tomorrow Graig is going home. Kevin says this HOh is BIG.
Bruno – this is the biggest one
Kevin – I said that last week
Bobby joins them they feel sorry for Graig because he’s been so down today. Bobby mentions he’s been trying to talk to him this week. Kevin mentions they have to win the HOH because it’s obvious the girls don’t value them since they put both Kevin and Bobby up this week. Bobby brings up how awkward it is for him because he’s up against Graig. Bobby tells them its not just Brittnee she’s got Sarah in her ear. Bruno thinks it was 2 people in Brittnee’s ear.

The rest of the gang joins them CHIT CHAT \

11:00pm Graig and Godfrey Main bedroom
the only ones not in the hot tub. Godfrey is doing laundry Graig is sad.. They briefly talk about the weather.

Wtf is this shit?!?!
Big brother the summer camp edition??
These people are having too much fun, big brother needs to f*ck shit up soon…

Did Kevin actually say he doesn’t think the girls see value in himself and Bobby because Britnee put them up? first off, both these guys put up Britnee and other women instead of taking out a physical threat. Also, Britnee told both of them when she nominated them that she was basically just using them to win the veto and backdoor her real target. Can we do another “favourite player” poll Dawg? Just curious how much opinions changed after this week.

Kevin keeps getting lower and lower on my favorite list, seriously the guy is so much up in Jordan’s ass it’s not even funny and interesting anymore. I was hoping that this week is a wake up call for him but seeing him cozying up to the meatheads again makes me realize that he is just a stupid player. Best case scenario this coming week, Bruno wins HOH, puts up Johnny and Sarah, Brit wins veto uses it on Sarah then Kevin is placed up as replacement nominee. While this setting will eliminate Johnny, I’m hopeful that it comes to fruiton because Kevin is actually the most likeable guy on the show and for him to go this blindly is just pathetic.

Big brother needs to add something. It’s telling the posts are short, their are not a lot of comments, and someone said it’s summer camp. Big brother needs to make them earn their food through comps … this will start something. Still haven’t picked a favorite which is unusual at this stage in the game. The only thing I want this week is for a guy to win and do the easy thing and put up a girl. Zack and Jordan have it way too good can’t wait till they have to pick a side … it will depend on the coming weeks and which side has the numbers.

i love the food comps, and dislike intensely the ‘pick the have nots’ thing. That is lame, hoh picks the ones to be on HN, they do that all too often these days on BBUS and Can, it isn’t fun to watch and the food selection by the whole house competing is pretty awesome. There is only so much oh the HNs are suffering due to the room they sleep in before that gets really old. i don’t understand that tshirt game, when that could have been a HN comp (or was it?) or food selection comp.

When they do that competing for food groups, then everyone doesn’t get certain types of food i guess that is complicated for BB to manage when they restock the store room but what the heck, at least once a season?

Simon/Dawg..
Did BB block the feeds during the fight between Graig and
Johnny? I search ur YouTube channel but couldn’t find it 🙁

It was during the Easter long weekend feed outage.

The only way to salvage this season, is for production to spill the bean on Zach and Jordan alliance(and we all know that is exactly what they do)…. this will wake them up, and hopefully make the wheels turn….. I find Godfrey hilarious and sweet but not a game player.

Hopefully whoever comes back in will do just that, blow up all the silly alliances.

If “salvage the season” means to you “sabotage the good players to help out the clueless ones”, then I’m not in favor of that suggestion.
You could also have BB make an announcement over the loud speakers: “Zach, you’re too good at this game compared to the rest, therefore Big Brother just decided that you have been evicted. Thank you for playing.”
If more and more people share your view and urge BB to accept its viewers have “dumbed down” enough to only root for those who can’t play BB, then the future BB players will become more and more clueless on purpose since that’s the strategy to have viewers like you root for them. They’ll purposely have alliance strategy sessions while the enemy is sitting on the toilet in hearing range ON PURPOSE as a strategy.

I 100% agree with u, but u have to understand sometime it’s way more fun to break the rules…BB is there for our entertainment …my issue is when it stops being entertaining … I can appreciate good game play but I will not tolarate boredom.

We all have different tastes 😉
Maybe you’ll enjoy “Jersey Shore”, “Keeping up with the Kardashians” or “The Real Housewives” more?
I don’t find those shows “entertaining” at all, while I find it fascinating to watch how smart game players like the BB16 Hitmen – and now Newport – manage to play an entire house of people who all should have done their homework and know what to expect…
I still have a “*” about Jordan, since I find him very “sketchy looking” to other HGs: When he’s talking strategy with someone and another HG enters the room, he’ll say sth like “yeah, definitely! definitely, man!” really loud and in a way I find obvious… Zach, in comparison, keeps calm and collected. I definitely see Zach as a way better all-around player, on Hitmen level.

Why are they getting rid of Graig anyway? He’s NOT influential in the house. He’s NOT a threat. He’s NOT won anything. He’s easier to sway in the voting. They want him out because he’s annoying? That’s playing emotionally for the women and STUPID for the guys. Bobby, though he’s not very bright, is a physical threat. That’s reason enough for the girls to want him out. And, the guys should want to keep Graig as a jab at the girl’s alliance. The girls easily feel defeated and go into a funk when things don’t work out for them. For the guys to vote Graig out only boosts the girls’ confidence. Getting rid of someone because they’re annoying is amateurish and not smart Big Brother game play.

All these great twists are wasted on this group of summer camp children.