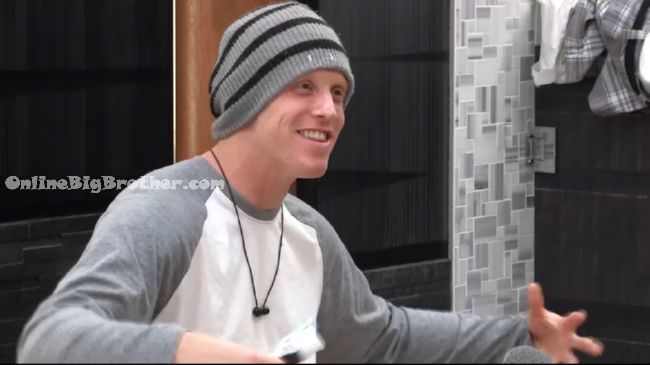 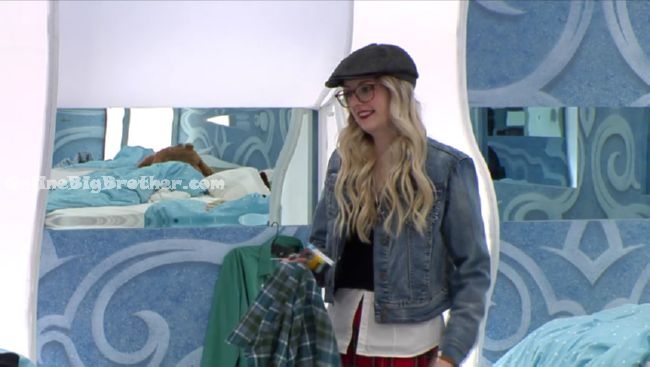 Jordan asks if she’s talked to Zach today.
Sarah hasn’t really
Jordan talked to him he’s 100% down “we’re good”
Sarah – Ohh ya for sure
Jordan says Graig has calmed down a little bit. Points out that Bruno is scared Graig might leave
Jordan about Bruno – “He’s very dangerous he’s worse than G in my book”
Jordan – we got a good group we’ll roll with that for awhile.. the good thing about us we’re two votes and if we need to flip flop alliances we can do it.
Jordan tells her the best players change alliances.. ‘G thinks he’s safe again.. “
Sarah – that scares me
Jordan – Kev’s speech seems to have deterred him from blowing up on everybody.. which is great.
Sarah points out her, Brittnee and Johnny are in trouble if the guys win HOH.
Jordan – So ya we gotta win this week take him out.. Get rid of Bobby 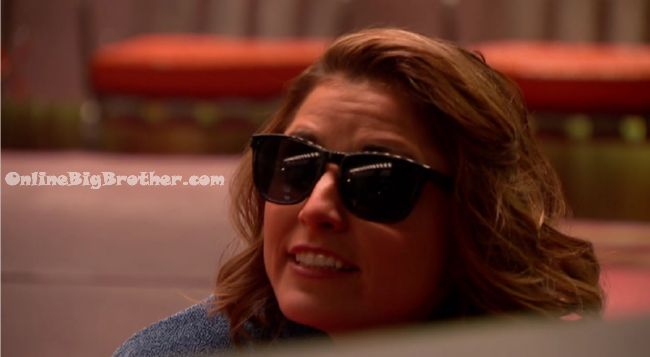 10:13pm Hot Tub Willow and Sarah
Willow calls herself a floater. They mention about have the votes to get Graig out this week but both of them want Bobby out next week. They count the votes, kevin, Pilar, Willow, Sarah and Johnny are locked to evict Graig. This week they need 6 votes to evict or 5 votes to bring it to ta tie. They know Brittnee wants Graig gone. 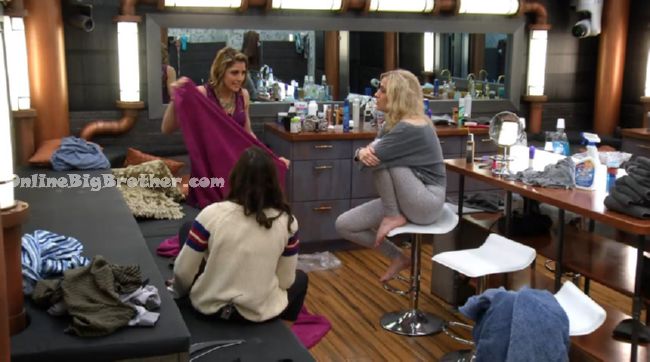 10:30pm Pilar, Willow and Ashleigh
AShleigh says she will nominated Godfrey and Johnny.
Willow says she will do the same thing maybe nominate Kevin (as the pawn).


Willow joins the rest of the houseguests in the living room. 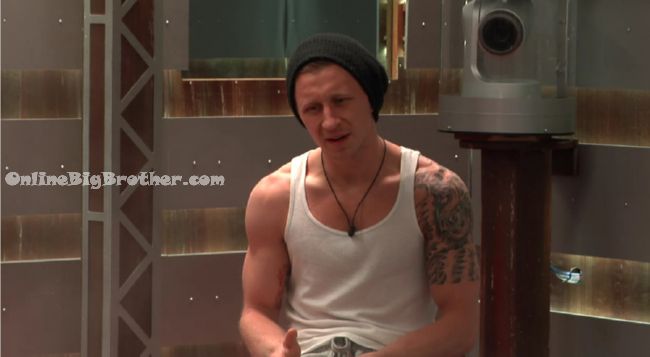 10:52pm Brittnee and Bobby Hot Tub
Talking about relationships. bobby mentions he’s game for any girls unless they are Absolutely Ugly. (Bobby is still going on with the I am a virgin lie) 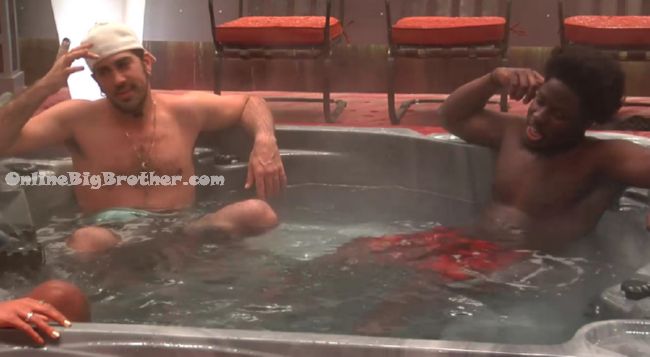 Bruno and Godfrey join them.
Bruno to Godfrey “your mic’s in the water bud” Chit chat.
Brittnee says she’s heard that Kevin was the only one that did “The Business” in the house. Bobby – “What m@sterb@ted”
Godfrey says he doesn’t mind if people do it in the shower but in the hot tub he’s not down with that, “Toilet is even better might as well do it in the pantry”


11:20pm Zach and AShleigh talking about her see threw pants. 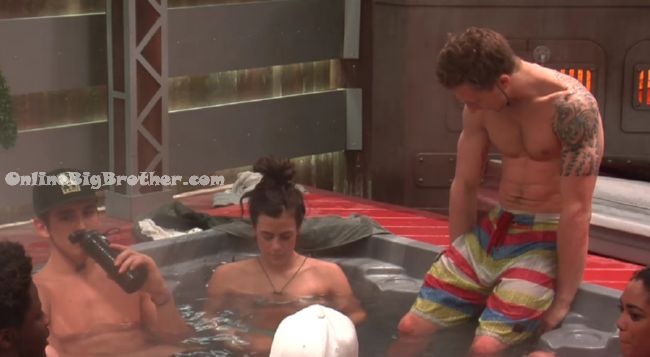 11:22pm Ashleigh and Zach join them. Bruno asks who won Bowling
Asheligh – I wasn’t paying attention
They mention Willow got a strike.

Talk moves to how many times production gets mad at them for talking about production. bobby says he’s never been caught because he never talks about it. They agree Jordan is caught the most. Godfrey thinks he’ll get kicked out for taking too many naps.
(Lots of random cht chat.. )
11:30pm Pilar joins them

Graig says Jordan, Bruno and Godfrey are locked votes.
He adds the vote is either going to be a blow out or he’s in. 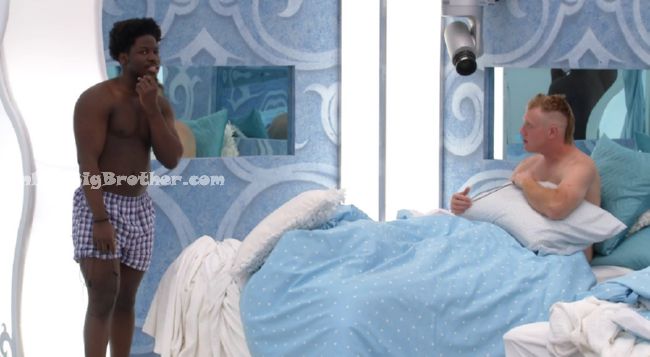 Graig trying to get Godfrey to help him get the votes. Graig tells him to work on Zach he’s the one they are unsure about.

Week One there’s a lot of Alliance but we’ve tried to make sense of it all.. Read our alliance help guide (Keep in mind the feeds have been down for a good while so things will most likely have changed)

While a part of me wants to see Graig stay (for entertainment reasons), he is going to over campaign………. like Sindy from last week. Either way, I do not care who leaves this week.

It is funny how the DR is trying to make Zach and Ashleigh happen, when it is nothing more than a mild flirtation from the feeds.

It seems like either way, the Chop Shop is ending, since everyone wants Bobby/Bruno gone next week.

You do know that Zach and Ash like full on make out at night in bed right? I am not saying they are in love but it’s more than just flirting. flirting doesn’t involve tongue and hands in naughty places, lol

Since the feeds have been back every night I see them cuddling, kissing, hands down pants etc.. unfortunately the audio is always out so we can’t hear what they talk about.

Why would Willow say she’d nominate Kevin in front of Pilar?…She’d not very smart is she?

AND in desperate need of a dictionary. I, for one, am totally “Bro” and “F (anything)” ‘d out!

Grain has got be one of the most delusional person in this house, no one likes you and for the sake of Canada please shut up!

Wouldn’t it be more beneficial to get rid of Bobby, considering he is a bigger threat?

But at the same time i know the HG’s don’t know this, but it would be better to get rid of Graig especially since one of the 1st 5 HG’s will be coming back, so Bobby is a bigger threat to win a comp to get back in instead of Graig so that might be a better choice in the long run.

I have to admit I really enjoy watching Graeg squirm… He’s doing everything wrong (too much campaigning/begging, too soon; talk to Zach and JP when there are several other people in the room, …).
Don’t get me wrong, I can’t stand him. But he’s such a trainwreck.
I love how he tells everybody that “evicting him” would be the big move compared to evicting Bobby, who’s so much stronger physically and socially. This guy is just delusional.

Why would they rather get Graig out, if Bobby is a bigger threat in terms of competitions.

So Johnny won POV and saved Kevin, and then Bobby got put up? So Bobby or Graig will go home. I personally think they should vote Bobby, only because I think he could win more then Graig. But Graig does have Bruno, so either way good choice that Brittnee nominated them. The females were dropping like flies, its about time a guy leaves.

Would love Nae to come back in and team up with Kevin Jordan Zach and the girls
She has so much potential and I don’t want that lost. Not even as a good player but as an entertaining one.

Pilar is so sweet but watching her flirtation with Kevin, it seems exhausting talking to her. Ofc I’d be the same if I wasn’t speaking my first language.

Craig got BACKDOORED by Britnee. Kevin and Bobby were initial nominees, Johnny won PoV and took Kevin off. I’m impressed!

I’m really trying to figure out the casting people’s though process. In what world did they think Pilar was a good choice? At least Victoria was emotional and semi-entertaining. Pilar either laughs, makes out with Kevin, or does both.

Did he seem curious about something being down there? Or was he just playing?

I hope Canada gets to vote again this year to put two people on the block. I would vote JP and Zach in a heartbeat. I don’t like how cocky these two are. The discussions they have with one another about how stupid everyone else is make me want to puke. If they think they are going to get away with this for much longer, they are sadly mistaken. Surely someone is going to go after the two of them soon…..sooner than later I hope.

If you’re so sure “someone” is going to target them soon anyway, why do you want a Canada HOH twist to put them up?
I’m confused at BB fans who develop a strong dislike for the HGs who are obviously the better BB players, just because they’re doing such a good job at the game. Would you rather have a season of Pilars and Graegs?
Them talking about how stupid Graeg is is completely normal, since Graeg really is VERY stupid. Them acting cocky, saying “we’ve got this!” is a subconscious way to create a bond, to make the other guy trust you more, to make him feel that sticking with you will be the better, more enjoyable experience. As seen in every season of BB, ever.
Newport is obviously doing a lot of stuff right, while the other HGs are doing nothing, or (almost) everything wrong. As a BB fan, I can’t help but admire that. Pity for the clueless others isn’t a strong enough motivator for me to root against them. :/

Ignore what I said about Zach and Ashleigh above. They have been making out in the Have Not room for about 20 minutes. Production has FINALLY got the footage they need for this showmance to blossom on TV (other than their DRs about it for the past 6 episodes).

I want Bobby to wake up, cockblock, and go Beast Mode on them.

bobby or graig… who is it smarter to evict? bobby is more of a known threat, graig is more of a known annoyance. depends on how noms and replacement nom were worded I guess.
is Zach being overconfident in his belief that he controls Ashleigh? not that Zach would know, but doesn’t ash have a final two with bobby? or did that vanish when bobby put his tongue in Ashleigh’s brainstem? could not care less about the promance of Zach and Ashleigh (brought to you courtesy of production and kfc).
take note: pilar talked game for the first time we’ve seen on feeds tonight. most of that was ‘oh no don’t say kevin, no, someone else’ but she talked game.
sure they are getting closer to the hidden power in the floor. with Zach present. if he gets the floor power it’s going to take everyone on here to convince me it isn’t ultimate production bullcrap. okay. i’m coming down from my feed induced hyper-euphoria.