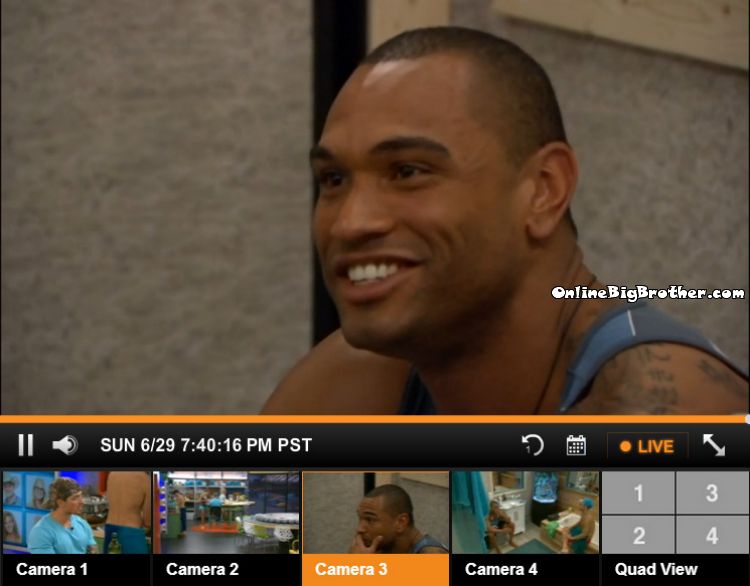 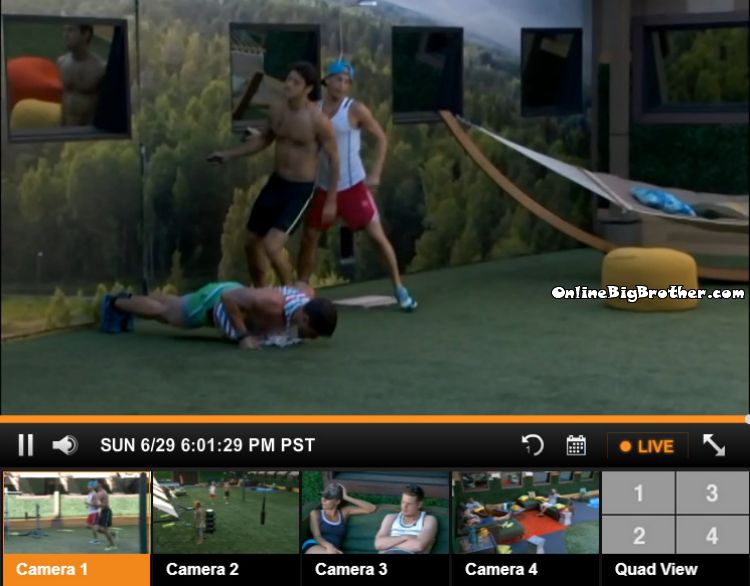 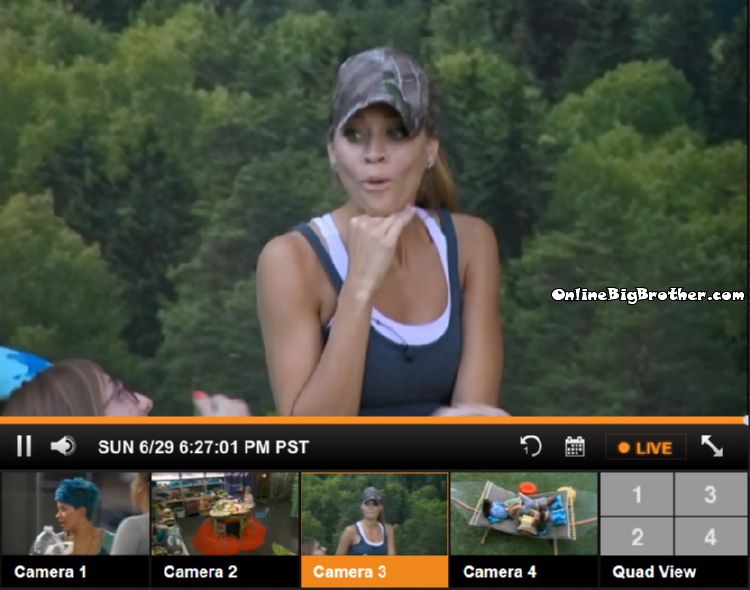 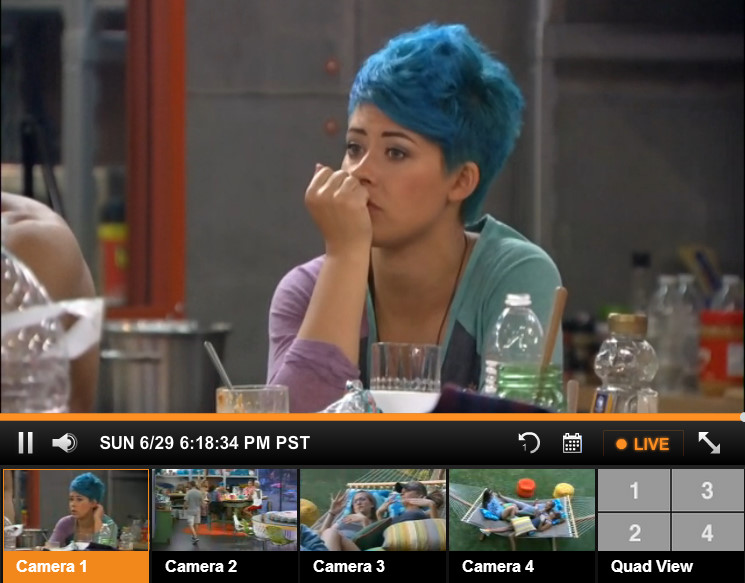 6:18pm kitchen Frankie and Joey Chit chat
Frankie is talking about broadway performances says a person in the chorus makes 900 a week after they pay all their dues.
“principals” aka leads can make up to 3500 to 10 thousand a week 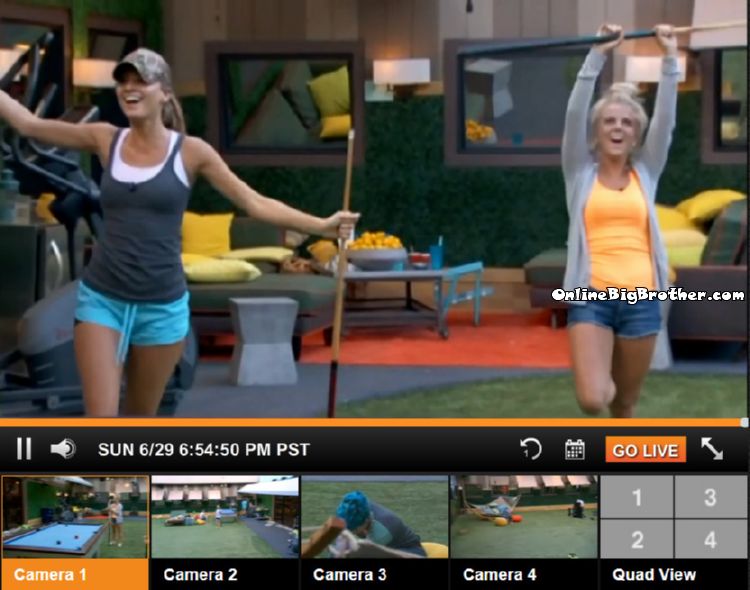 6:49pm Caleb and Derrick playing pool against Nicole and Amber. The guys are winning. On Caleb’s shot Amber blows on 8 ball so it doesn’t go in resulting in Caleb losing the game. They decide on a rematch. 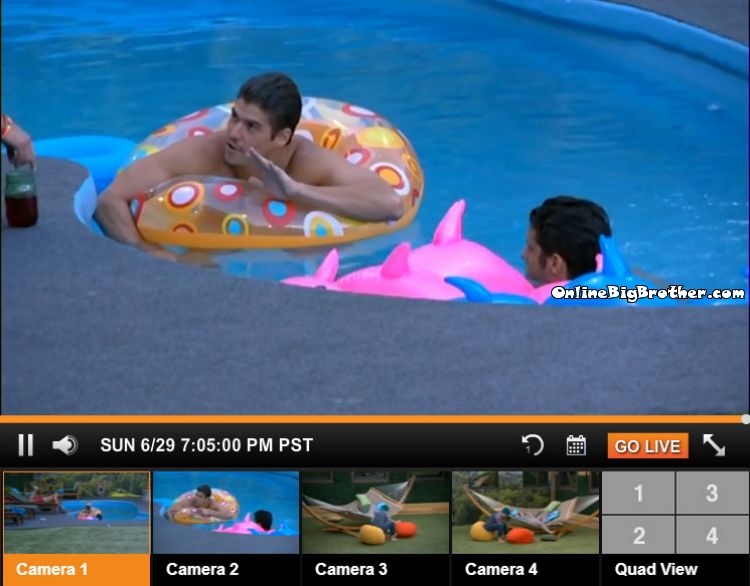 7:06pm Frankie, Cody and Zach  Pool
Frankie says they need the HOH room to hold meetings otherwise their group will start getting paranoid. Cody mentions the storage room but it’s not as good. Frankie – “my mother said be careful about those door they are very thin people can hear you through those doors.” They head over to the hot tub where talk goes to how hard they are planning on partying in the finale. Frankie says his mom is planning something at her place. 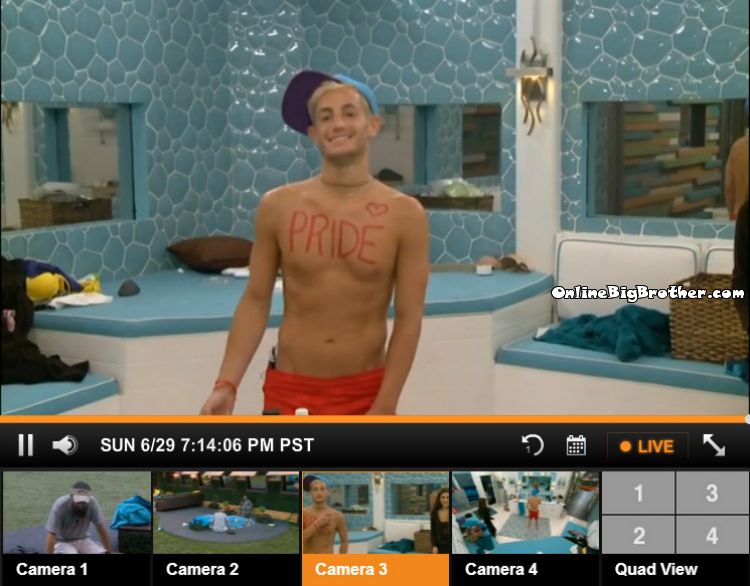 7:15pm Frankie gets Victoria to write Pride on his chest as it’s Gay Pride Day New York. Frankie starts walking around the house asking people to share what they’ve done today that makes them proud he rolls into the hot tub. Christine says she’s done nothing today.

7:28pm HOH Devin and Frankie
Devine going over his conversations with Brittany. Devin is worried about how he’s being portrayed and how he is going to explain that to his daughter.
Devin – “I’m laughing because I feel at peace right now 500 grand isn’t worth the shit i’m doing right now”
Frankie – “and it’s beating you up”
Devin – “ya”
Frankie builds up how special their alliance in within Big Brother lore. Adds they have to be loyal to their group but sometimes you have to be a little deceitful, “If you’re perfectly honest you’re a joey or a Brittany”
Frankie points out that sometimes you have to act differently based on who you are hanging out with. Cites when he’s chilling with Cody and Caleb and he says chauvinistic things just to keep the flow going but that is not who he is.
Devin saying the way he use to be is the way they are seeing him, “I use to be a selfish person”
Devin starts going on about Brittany,  “I lost my sh1t up here with her.. it’s my daughters birthday so piss off” Devin brings up what he said to Joey earlier today, saying he wanted to have a silent alliance with her as long as she goes around and cleans up the damage she caused. “Well ya it’s a bald-faced lie but I want her to clear things up before she goes”
Devin start to cry “Being with her is more important than any kind of money.. I’m a good guy and I have a big heart I love my daughter.. I might not do the best things in life But I’ll be the first person that comes give you a hug to say I’m sorry”
Devin – “When I walk out that door I want people to be proud of me”
Frankie can’t believe what all the parents left behind.
Devin – “I feel shitty I feel like a d!ck.. thats how they are going to portray me”
Frankie doesn’t thinks what happens in the house has any bearing in what happens outside, “Look at Aaryn She’s is a star”
Devin – “no she’s not”
Frankie – “Yeah of course she is she’ s in Texas she’s a star” 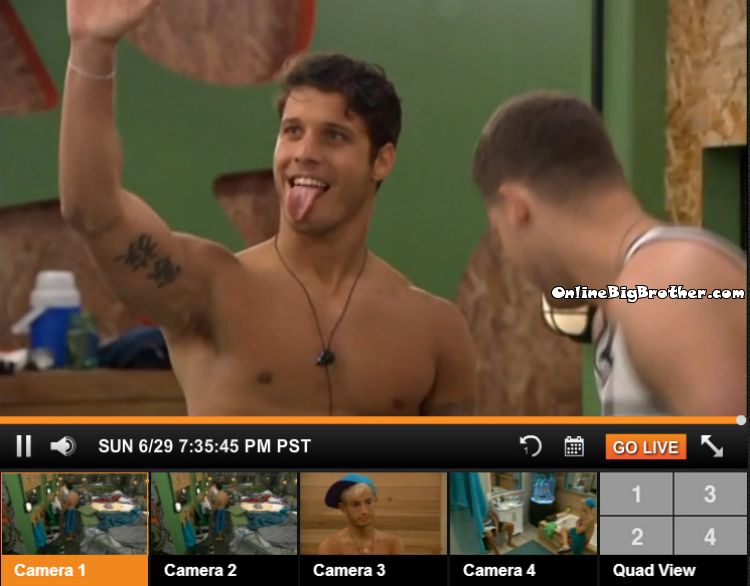 7:35pm Derrick and Cody
Cody doesn’t know what side Frankie is on. Derrick says he’s going to stay close to Caleb in case they want to Backdoor Zach. Cody says Caleb told him this morning he would put someone from the alliance up or Hayden, “That would be me”. Derrick tells him if Cody goes up it’s crossing the line. Derrick doesn’t want Cody to go home because if he does he’ll be right behind him.
Cody says how zach and frankie don’t know how tight they are.


7:56pm Storage Room Caleb and Cody
(Before they go into the storage room Caleb is telling saying when he was growing up he lived of raman noodles cold they never had a microwave he ate his ravioli cold to. “All i have to say is.. LOOK AT ME NOW”) Cody telling him he needs to seal the deal with Amber. Caleb – “thats funny because everyone has been saying it all day”
Caleb talking about the pool game with Amber and Derrick. Caleb brings up Derrick saying Caleb was playing horribly because he was staring at Amber. Amber jiggled at it. (Caleb has lost his mind about Amber it’s offical…  poor guy) 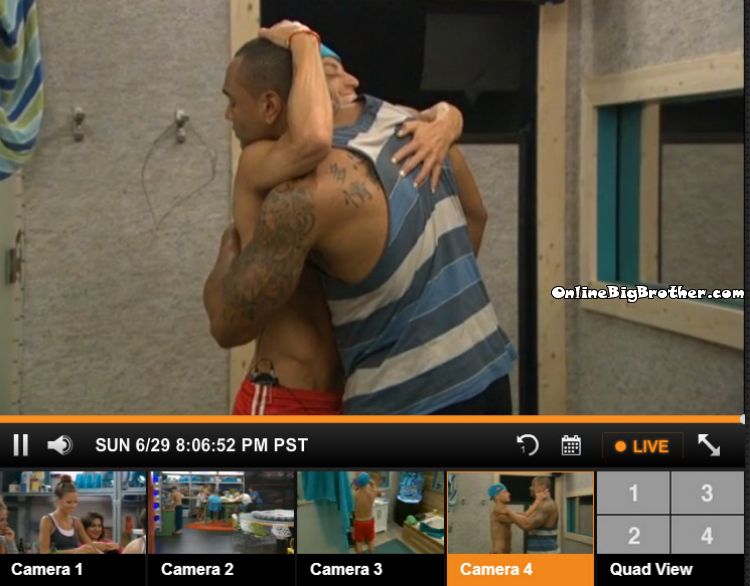 8:05pm Devin and Frankie agree they are scared of Amber, “She’s well protected”. Devin says even though she’s dangerous Caleb has as good reign on her for now. Frankie says they have to keep what they have been doing their alliance is in good shape “Working together but separately.. look at what we’ve accomplished it’s pretty awesome and I see it’s been really hard on you you’re roll has not been an easy one I appreciate it”  Frankie says the vote is going to be unanimous except for maybe one vote. Devin mentions Brittany telling him she’s undecided. Frankie isn’t worried tells him Brittany had no idea what her game was yesterday

Where the vote is

As of now Joey is going home.. (Still early)

LOL Aaryn is a star?! That’s news to me!

Caleb please stop wasting your time on Amber. That is the most pretentious annoying situation ever, yes she is pretty but nothing to get as wrecked about as he has been. Can’t wait till the boys send her packing because they dont want her around as they feel she is sitting too pretty now. I’ve never seen such a stupid player as Devin, who are you to think you’re the messiah of the Bomb Squad? What a loose cannon! This bunch is about as exciting as watching wallpaper dry, yes I understand how repulsive the last cast was but this bunch is just so boring.

The reason the girls in the Bomb Squad? Devin at 4:30 was bored and thought an 8 person alliance would be genius…. LOVE THIS GUY HAHAHAHA

Psycho-Dude is one scary mofo. And selfish too. Must have clean towels. Must have clean sheets. Must consume massive quantities of food. Must be in control. Must be top bad ass. He is one massive walking talking character flaw. Even the HGs are getting creeped out and so am I.

Portraying you as a dick, Devin? You are a complete dufusy dick who may be suffering from steroid withdrawal. That guy has got to go.

Do you think Team America will save Joey if she is the one they vote off?

Hated most of last year’s casts but honestly I would prefer an “Amanda vs Helen” and “Elissa against the world” storyline rather than the snoozefest story of “brigade 2.0”. Hopefully bomb squad becomes moving company and is destroyed next week, I can’t really stand Devin, Zach and their massive egos.

People were saying the same thing about the Moving Company last year and look how that turned out.

Dumbo Devin aka the sinking ship. Its suicide to align yourself with this dude. He’s too paranoid and its only week one. I don’t like how he’s playing donny either 🙁 he’s being manipulative and arrogant. loved the BotB challenge btw. 🙂 gotta taste of a gatsby party haha

Yes, I got the Great Gatsby reference in the Battle of the HOHs and thought it was well done – loved it, got a huge laugh from PowPow on a swing.
As for Psycho Slugger – I just now realized how much he reminds me of OJ – he’s got that cocky over-confident ego and that smooth talking jive while he bullshits and no heart, just ice in his veins – completely ruthless. I would not even want to sleep in the same room with this guy but boy-oh-boy it’s going to be interesting to watch him strikeout.
I’m putting my money on Derrick and Cody. I’d say they have a reasonably good chance of going far.

OMG! I just said that similar OJ reference to my family as we were watching last night! I think Devin is playin them all now that I saw his cry/eye rinse.

Yeah, I thought the same. OJ and Devin have the same sociopath tendencies. You can see it in their eyes.

wow, its multiple cracks in that bomb, it should blow any minute <–pun attempt..anywho, amber has calib wrapped around her finger, its hilarious..big devin just love those holes, hes delirious..blue hair looks so sad, ha..nerd herd and jameka 2 cruisin..pew pew is a sad excuse for a big brother player..zack attack already got knives aimed at his back hahaha..so far better than last season i think..

Devin is psycho as the day is hot and long. It will be interesting to see what happens after the shortest alliance in human history blows up. I suspect caleb and frankie will go quiet far.. No one is really threatened by frankie and he is fairly smart and manipulative.

Imbso happy to be back here, reading the updates and the COMMENTS. its the icing on the cake, since I don’t have the feeds. THANKS EVERYONE, its good to be back.

Devin’s new idea – “We should bring the entire house into the alliance so we have the numbers”.

Not sure which pains me the most to watch… Kim kardashian’s ugly cry or devin’s fake cry?