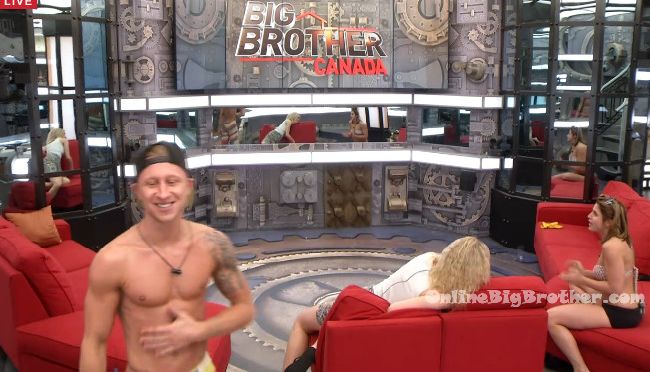 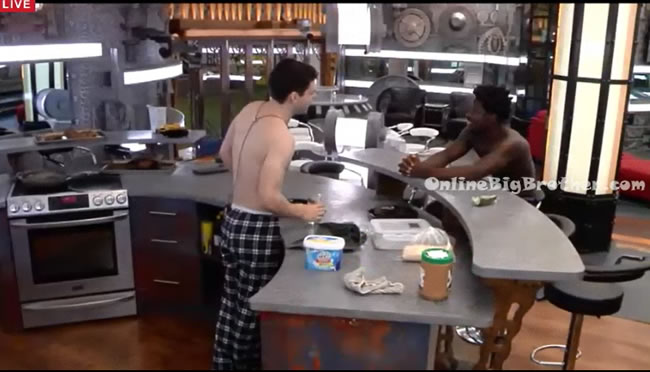 12:30pm Kevin says hey man, I know its like tough for you to like relax right now because what’s happening but like I swear to god if you just chill a bit today.. we’ll have that conversation. Godfrey says okay. Kevin says stuff will make sense. Godfrey says but we’re still good right though? Kevin says I talked with Pils and I don’t f**k around with this. Just relax. Godfrey says at the same time I am trying to not seem to comfortable. At the same time I already told people I think he might put me up because everyone is asking me dude what do you think is going to happen. I’m like I don’t know. Just let me know whenever you’re ready and we’ll talk it down.

In the kitchen – Willow, Sarah and Brittnee cheers with orange juice. Willow says cheers to hopefully you two getting your periods. Sarah, Willow and Bobby talk about how much money the get paid each day they’re in the house. Willow and Bobby aren’t sure how much. Sarah talks in code to tell them without Big Brother telling them not to talk about production. 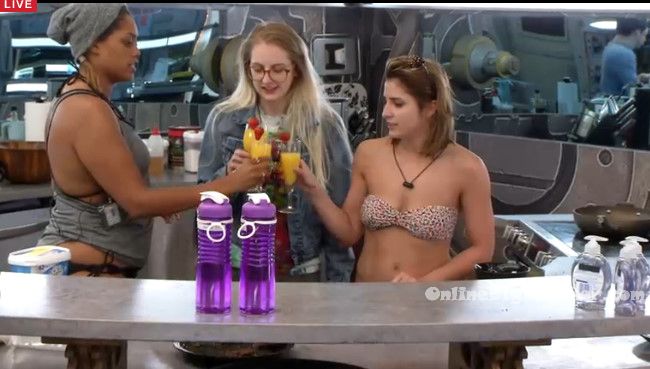 Willow telling Sarah she’s like Beaker from the muppets.

1:10pm Kevin tells Pili we have to go shopping together when we get out of here. Pili says okay. Have you ever bought furniture before? I haven’t. Kevin says you’re picking it all. Pili asks what do you need? Kevin says I don’t really need anything. Maybe a desk. I’ll buy my mom some things. Kevin ask her to have a tea date with him later to talk about life.

Bobby says I think I got too much sun today. Ashleigh tells he looks so dark. Bobby says in the DR the lights are so weird in there I looked like I was like black… it was like disgusting. I was going to be like call for a medic. But no, no I look normal.. yeah.

The living room tv flashed a black screen and Bobby and Ash became anxious only for it to be nothing after all.

Oh yeah, Bob-bitch?! You look like shit already, that’s why you needed a tan in the first place- talking about how you look black and it was disgusting.
No, Mr. Bitch, you’re more likely to get skin cancer before you look black- that’s right, even nature hates you and will grill your skin before giving you any melamine.
And as for tha Shit-llow bitch, talking about King Kong and shit… Bitch you’re ugly! Even Sarah is playing your ugly butt.
That’s right I said it- now, bring on the thumbs down

Bobby is an idiot, think before you speak.

Bobby can’t do that… his mouth is bigger than his brain, wait a minute, I’m not saying he has a big brain or a small mouth. Hmmmm… you are sooooo correct Bobby IS an idiot.

Does Britt/Godfrey hear that? Really, Bobby! Have we learned nothing?

i don’t think so, i really wish they did so we can see their reaction. Bobby needs to be put in his place

I just watched the sideshow and this week they showed Sindy her goodbye messages but last week they didn’t show Jordan his. How is this fair? Anyone know why they did this?

wondered the same thing. my conclusion was that they wanted Jordan to do all of his press and pods blind. they wanted him to present his own speculations. plus, thinking ahead, they want the jury house moment of cindy spilling the beans to Jordan for that two minute ‘what’s going on in the jury house’ segment they are bound to do to ensure that every episode runs long enough that viewers never see who won hoh on a Wednesday.

Bobby s a douchbag period. He needs to realize that being black is other people s skin color and there is nothing disgusting about it. He seriously needs to grow up!!!!

When I first seen the headline for this article I was thinking, “Did bobby really say that? Maybe he meant something else, or maybe it was a joke”… When I watched it, he said exactly that in a context I did not think was appropriate. Ashleigh’s face sums it all up nicely.

Kevin is starting to grow on me. Planning to backdoor a good player like Bruno (who doesn’t have Kevin’s best interest at his heart) while covering his bases with Sarah & Godfrey (to have him going after his friend Zach later) and also still staying good with Zach is definitely the way to go for Kevin. I would rather prefer to see Bobby leaving this week anyway.

Bobby.
Proof that people are stupid.

Bobby s a douchbag period. He needs to realize that being black is other people s skin color and there is nothing disgusting about it. He seriously needs to grow up!!!!

So being Black is dusgusting Bobby? Not only is he a fool, but he’s ignorant. I just want him gone so I never have to hear him open that stupid mouth again. Sindy would love to know he followed her right out the door.

Wow Bobby. I suspected he may have some preconceived idea’s on race just by his behaviour but I thought it was all in my head. What a disappointing human. Evict him already.