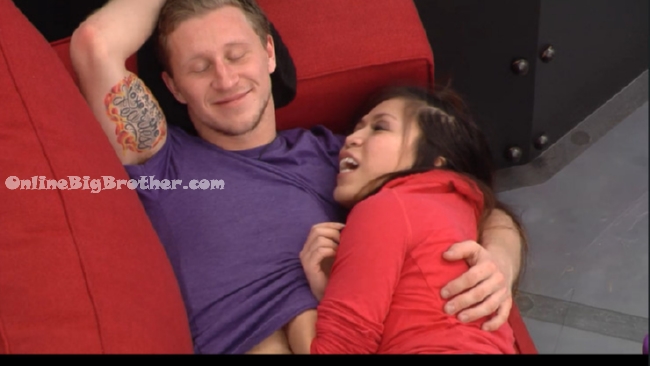 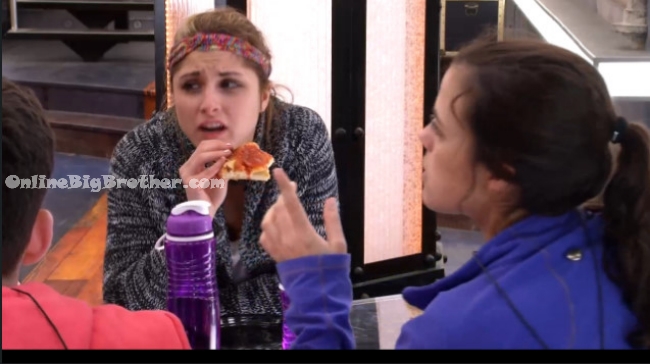 12:15am Kitchen Bobby, Willow, Ashleigh, Kevin, Jordan and Pilar
Talking about how shitty Risha was towards Pilar last night. Some snickers about how she was always flaunting her breasts around. They all mention how relieved they are about not being the first one out.

Willow’s speech was going to be “Risha it’s been real and it’s been nice but it hasn’t been real nice.. don’t always rely on your chest area to get some votes”
Willow – Literally they were always out

(Sorry the audio on this video is out of sync) 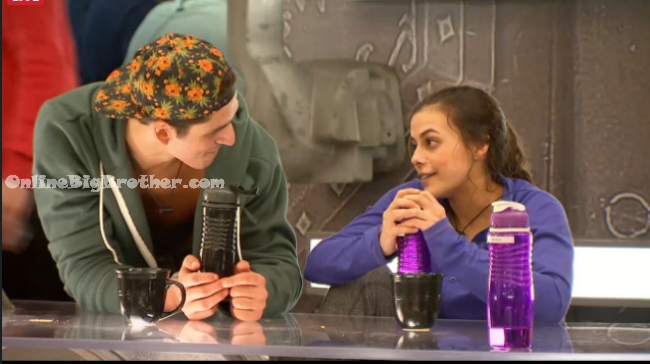 Zach says he knew Pilar was going to stay.
Zach – cute little mexican girl all the 16 her old boys are crushing on you
Pilar says she feels relaxed she’s not on the block “I can enjoy it right now for a week”
They head to the storage room. They briefly talk about how close Pilar came to winning the competition. 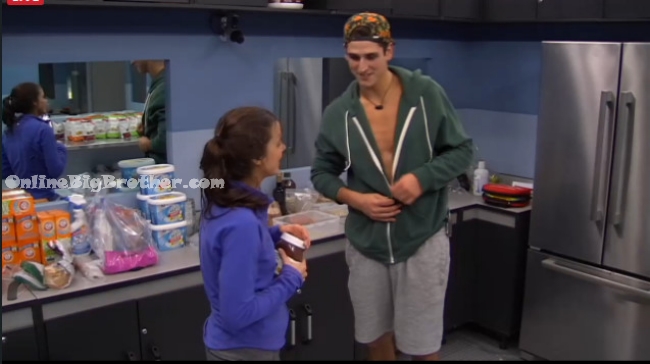 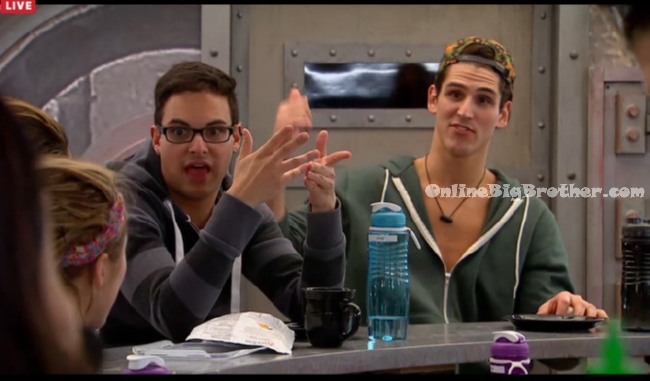 12:10am – 12:40am In the kitchen the house guests are talking about the HOH competition. Bruno says that he was up there for an hour and a half. Bruno tells Graig he’s going to have so many girls lined up for him when he gets back home. They are going to be lining up for you man. They’ll be lined up! Your life is going to change. The house guests hope Bobby gets his room (HOH room) tonight. The conversation turns to talking about the HOH letter. Sarah comments on how the family members have to prewrite the letters so that they can’t give away information in code. They write them before that way they don’t know the context of what happening. Zach says getting secret codes in your HOH letter is such a cop out. That’s like the lowest of the low. The conversation turns to talking about Risha. Zach says she was a really nice lady and didn’t do anything wrong. Johnny and Zach talk about what might have been on tonight’s episode. Zach thinks a good way to kick off the feeds would have been to show the HOH. Zach says he will do anything in the havenot competition tomorrow.
Johnny and Zach discuss whos competing in the HaveNot Competiton tomorrow: Zach, Kevin, Bruno, JP, Godfrey, B, Naeha, Johnny
They talk about being havenots. Kevin says he would have diarrhea for a week. Zach says stuff your faces tonight. All the house guests clap at how they’re all going to be on at least 5 episodes. 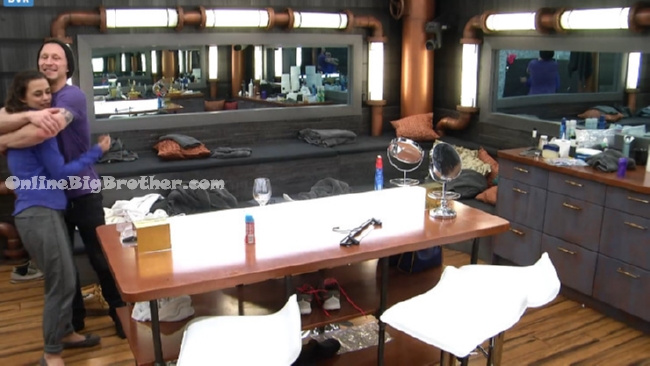 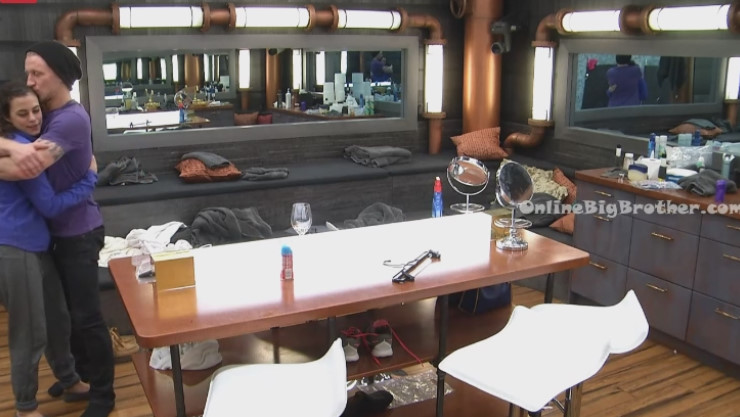 12:40am Pilar congratulates Bobby he gives her a hug and a kiss on the forehead. Bobby climbs into the shower shows off his b*m. Godfrey and Kevin join.. Chit chat 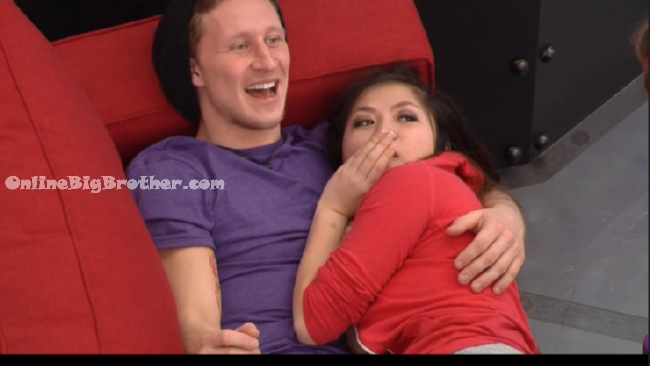 12:58am Bobby and Cindy
He tells her he’s surprised she didn’t try to cut a deal with him. They chuckle at this as it’s so early to start cutting deals. They bring up the alcohol and how Bobby can save it. Bobby mentions his least favorite alcohol is tequila and he’s thinking that is what they will give him.
Cindy wants to use his bathtub she starts rubbing his abs.
Bobby – “She’s playing with my nipples guys”
Cindy giggles says he’s been flirting with bobby from day one.
Cindy wanted Godfery to “slip” during the HOH she kept saying to herself ‘Godfrey come down Godfrey come down”
Cindy – I broke a nail
Bobby – On my abs ?
Bobby agrees he’ll pick Cindy to host the Power of Veto competition.
She goes on talking about how much she likes Bubble tea..
Cindy mentions that Brittnee gets her own bed tonight. 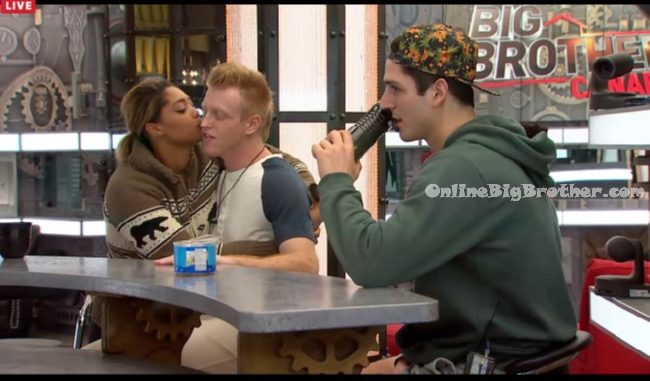 12:50am In the kitchen – Naeha, Bruno and Cindy are talking about the HOH competition. Bruno says he thought she was going to get disqualified for turning around. Cindy says that she did it a few times and they warned not to do it again. Pilar joins them. She says she’s so happy she got to stay. It was very scary! I’m just glad its over. I’m glad I got to compete in at least one. The house guests start talking about past BBUS house guests like the Meow Meow, Jeff/Jordan, Hayden Moss. 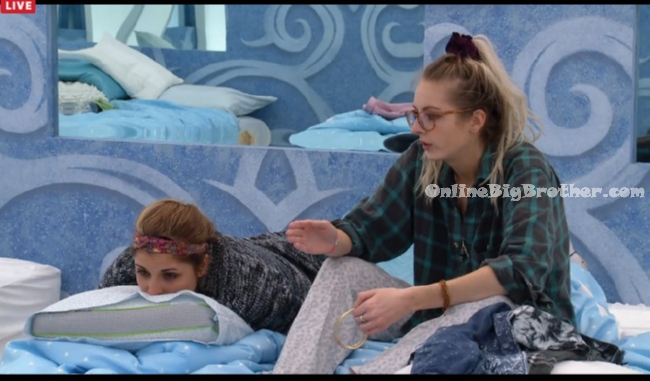 1:10am – 1:35am Naeha, Jordan, Johnny, Britt, Graig, Sarah, Zach and Bruno are in the kitchen talking about Big Brother Canada 1. Naeha says she loved Jillian/Emmitt. She says she loved Gary too. They all talk about how Topaz messed up her vote by voting for Jillian instead of Gary. The cameras switch to the bedroom. Willow, Pilar, Sarah, Ash and Cindy. They talk about how they felt bad for Risha having to go home. Pilar says thanks Canada, I love you! Sarah says after Canada just saw you rock that HOH competition they’ll be like yeah we made the right decision. They talk about slop. Willow says her body is messed up and really would be on slop. Sarah says she would be able to do it and tells them if they’re on it to just get it down. They talk about the HOH competition. Sarah says Ash did great. You three did great. Sarah tells Cindy that she did so great in the POV and how it was so inspiring. Sarah tells Cindy that her photo out there looked so good. Cindy says what are they trying to make me look like .. Rich South Korean, Rich Asian? Pilar and Cindy leave the room.

Sarah asks Willow – I wonder what Bobby is going to do? Willow says I think just what he said he would do. Pick Godfrey and a pawn or whatever. 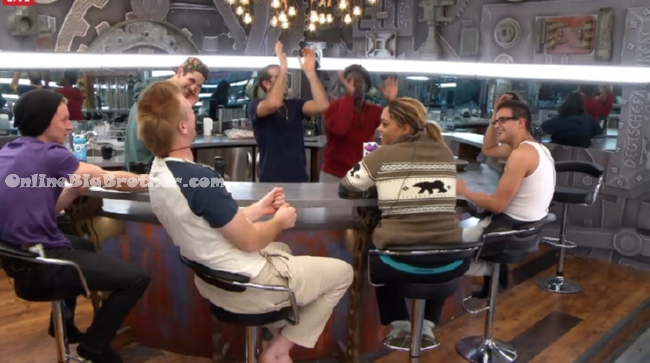 1:29am Kitchen (A bunch of them)
Talking about the balloon challenge how they had it first night in the house and now it feels like a month ago. 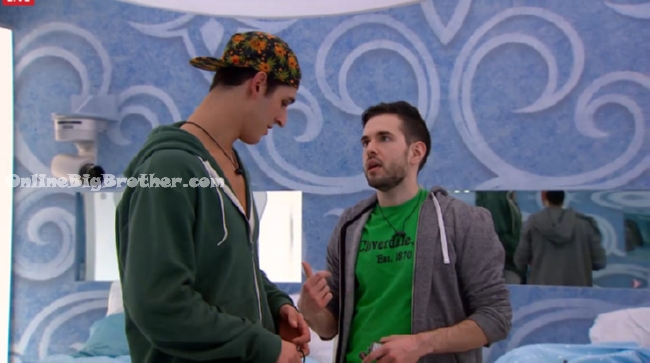 1:36am Zach and Jordan
Agreeing that Jonny is a big threat. Zach says if they don’t get him out now he’ll be dangerous.
Zach – Who’s going to come after me and you that is the question…
They head downstairs to adjust their microphones.

Zach and Jordan are one of the only ones who have their heads in the game 24/7, and them constantly walking to places together will eventually look suspicious. They are the only ones who are thinking about nominations.

Bobby was talking about how he was trying not to look at Sindy’s ass during the entire HOH competition. He seems like a really nice guy, which I am shocked by, since I thought that he was going to be like Andrew and Tom.

It is very good that the BS twist did not change the game at all, since Risha would have been voted out anyways.

LOL – I think Zach has a chance to go deep if he is willing to cut Jordan. Jordan reminds me of a Peter/Alec hybrid, he is as overconfident in his mental and physical fortitude as Alec was and his game talk is as bland as Peter’s pizza and chicken nugget diet!!!!

It annoys the heck out of me when they start off the season with an endurance comp…and don’t turn on the feeds til it is over. Why bother? Should have waited til next week to do it. Actually…does Canada even keep the feeds on during an endurance comp? I can’t remember. I know it is a privilege for the U.S. feeds, because they pay…but since Canada’s are free, I’m not sure.

I know it’s too early to start whipping out some nicknames. But for now, I think Sindy will be called Vegas…because of her pageant history. Plus, Vegas is nicknamed Sin City. May I’ll just call her Sin Cidy…

I would call her the most annoying house-guest and vote her out asap!
phyndie with a p for phycosis oops I mean an S for Cya

I wonder why they are hating on Godfrey? Any hints?
Somehow Cindy seems to be integrated into the group, which is a surprised seeing how almost everyone voted her based on first impression. Can’t wait for someone to rock the boat, it would be a shame if this season becomes a replica of BB16 where cody and derrick the only people thinking about the game.

Im soo thankful for you guys at onlinebigbrother.com. Ive been a reader since bb14

Thanks Haley! It’s always great to hear and thanks for coming back each season!

Welp, so Macklemore is gonna get a lot of wimmins? Yah, right!