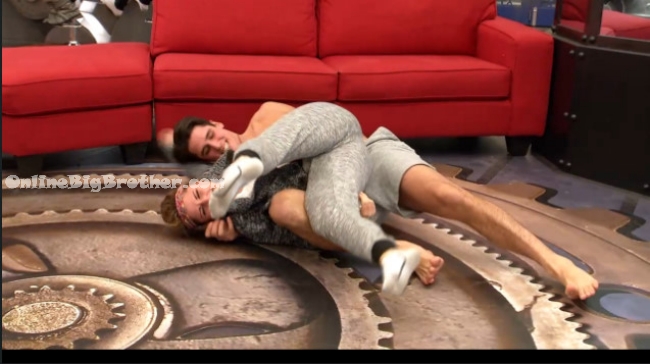 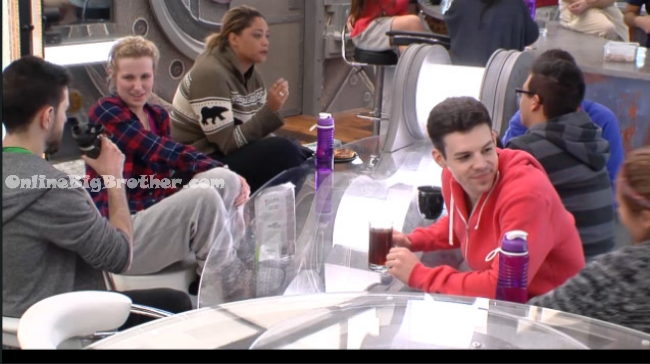 11:32pm Feeds up collection of house guests sitting around the kitchen. Random conversations.

Of course people are telling Pilar that they were going to vote for her anyways. Random chit chat about “Nobody wanting to be the first one out in reference to Risha. 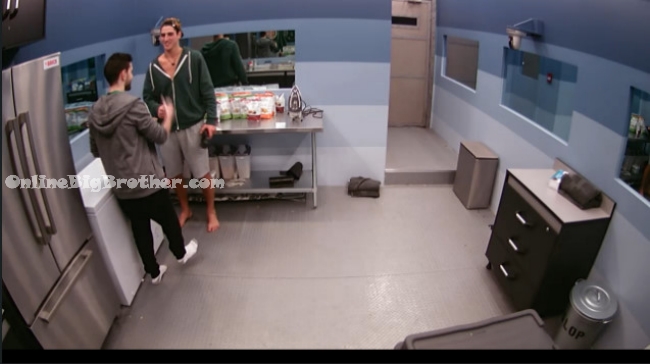 talking about wanting Jonny out. They say Cindy is on board.
Craigh “We’re a deadly combo”
Jordan walks in and the conversation changes to pork chops. Craig calls jonny a floater say the entire house wants Godfrey out. Craig leaves Jordan and Zach.
Zach – “No one ever expect you and I are together”
Jordan wants to convince Bobby on his nominations by saying that they have to ally with the girls because the girls are going to go after the strong guys. (Perhaps a divide and conquer strategy to keep the girls after Godfrey etc)
Zach and Jordan want Jonny gone. Jordan wants Godfrey to stay at least another week so he stays the main target.

Sounds like the plan is to put jonny and Godfrey up or at the very least try to talk bobby into putting them up. Godfrey walks in the conversation changes to what they want to eat tonight. .

Conversation in the kitchen Bruno, jonny, Zach, Jordan and Craig
Jordan claiming he got hurt during the competition.
Craig saying they saw half of Risha’s “Lips” today when she was sitting in the kitchen today. “Swear to god 1/2 lip out”
Jonny about him and Risha in the bathroom “I saw everything”
Zach – I did too
Jonny – “I just didn’t see lip I saw EVERYTHING” 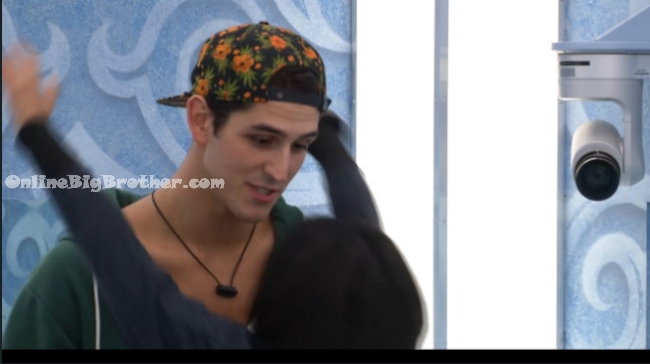 Zach says he has bobby “trust me”

Zach tells her that Jonny and Godfrey are going up and she’s safe this week.
jonny walks in Zach keeps with the “Godfrey is going up.. nobody has to try crazy sh!t week two..”
Naeha leaves.. Zach “I’m fuc*ing sacred””
Jonny =- “I’m nervous”
Jonny tells him now is not the time to make a big move./ 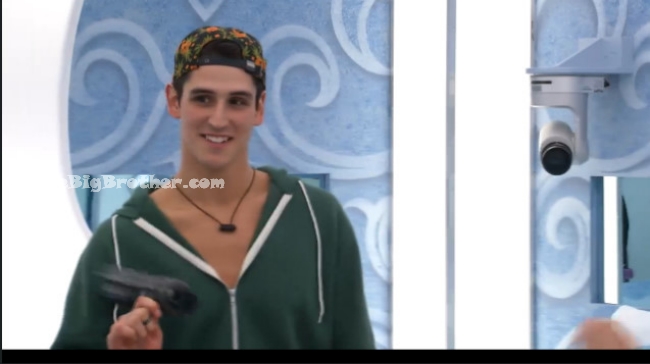 11:55pm – 12pm In the kitchen. Sindy, Britt, Sarah, Godfrey, Graig, Bruno and Naeha are hanging out chatting. Sindy is talking to Sarah about her friend that would flip seeing her on Big Brother. She says her friend got her into watching BBUS. Britt and Sindy start talking about the HOH competition. Naeha asks everyone if they’ve seen her earing. (Sounds like it’s the earing Kevin used to pop the large balloon.)
The cameras switch to the house guests sitting around the kitchen table discussing what will happen tomorrow. They think nominations and a have/havenot competition. Bobby talks about the HOH competition. Pilar asks “You could have been up there for hours?!” Bobby says yeah. The cameras switch back to the kitchen where the guys are cooking pizzas.

12:00am Willow and Zach wrestling

Willow and Naeha already having moments with Zach? I can already see an all girls alliance fall out in here.
Looks like we have to watch the next season of BBUS for a successful (and likeable) all girls alliance.
Hopefully one of the girls surprises me like Neda did last season, big brother has yet to have a female “mastermind” winner.

Zach is making his rounds around the house. He is not doing it to the point where he is coming off as aggressive, but he needs to be careful, since people will start to catch on. Him and Jordan remind me of the Sheyld alliance.

Willow is a lot smarter than I thought she would be. She knew that Canada was voting because in case the votes for a tie, there was no HOH to break the tiebreaker.

CINDY WITH AND S lol jk

I dont understand why everyone wants Godfrey out?

I don’t get it, why do they want Godfrey out? He hasn’t done anything at all.

If you in the house, you would get it… The house is crazy ….oh wait…you are in the house, what are you doing on social media, Sindy with an S….lol…

“I get paid this Friday! Time to pick up one of those really cool Sheyld t-shirts that Peter and Alec wear!”
-No one. Ever.

Actually…. I have one. LOL
-Topaz

Well…here we go again. Spot any gold-diggin’ yet? Wouldn’t be surprised. Thanks for the evildick link to the live show tonight, Simon. We appreciate the work you and Dawg are going to be putting into this site for our entertainment this season. Big Brother wouldn’t be the same without you both!

Zach asking Willow whether she’s into boys or girls cracked me up. Too funny.