11:45am All the houseguests are up and getting ready for the day, eating in the kitchen or getting ready in the bathroom. Jordan and Jeff are in lounge room talking. Jordan says that everything annoys her and if Dani wins HOH it will really annoy her! Jeff says he has to go poop, come listen to me. Jordan says “No, it’s gross.” They leave the purple room and go to the WC. Dani, Porsch and Kalia are in the bathroom getting ready. Big Brother has told them that they will be on an indoor lock down soon until the live show tomorrow night.

12pm Rachel brings out the HOH camera to take photos. They are all joking around and taking photos. They talk lots of random photos of all the house guests. Rachel takes a picture of Jordan and Jeff and tells them to be cute and act like they like each other. 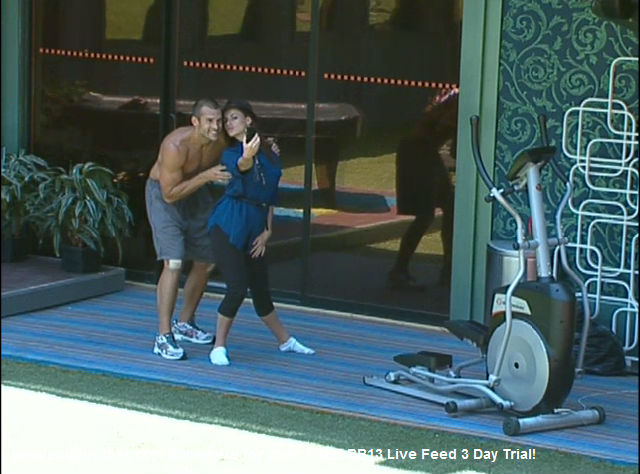 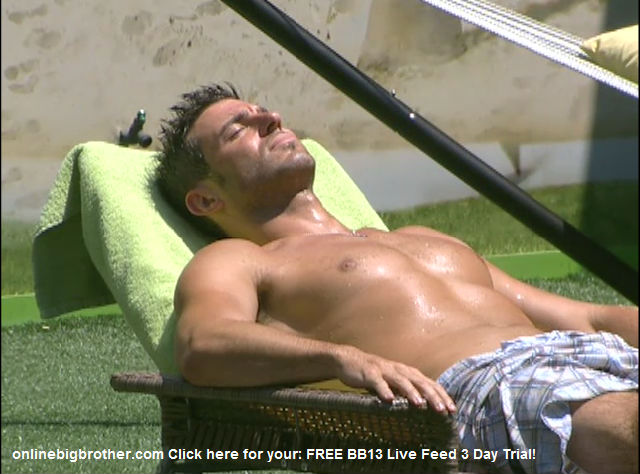 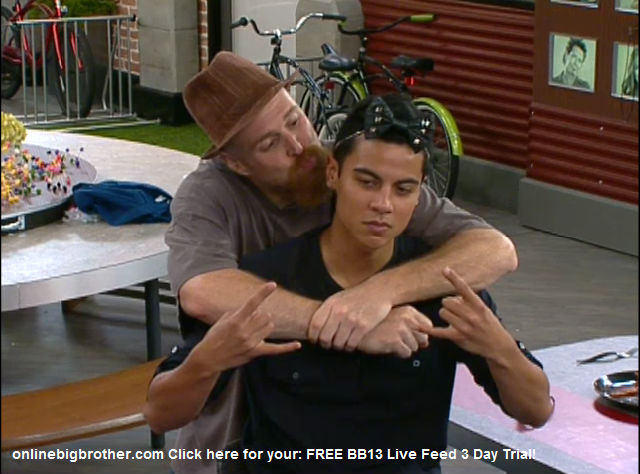 12:30pm – 12:50pm Jeff, Jordan and Shelly are out by the pool talking about wanting to meet celebrities and professional sports players. Dani is in the kitchen and jokingly pretends to be Julie Chen asking Dominic what Dani owes him for getting him kicked out of the house. Dominic says well Julie this is a family show …lets just say it involves hamsters and a lot of Adam. Rachel talks about having to write the HOH blog. Dominic asks her to write his life story. Porsche informs Dominic that his bag and Adam are in the storage room. Dominic says that he is going to pack a lot of other peoples personal stuff. Everyone leaves the kitchen but Dani and Dominic. Dominic asks even if I try to stay how can I not put you in danger? Dani says she doesn’t know. Dani says that she is really excited for it to be endurance. Dominic says that she should go to sleep early. Dani says no ..I will sleep all day in the HOH tomorrow. Dominic says he doesn’t want to be up in the HOH room with them. Dominic says that maybe he will start a fight up in there. Dani tells him to be nice. Dani tells him to save it for his speech. Dani says that she didnt do anything wrong. Dominic tell her that she is too smart for them. Dominic says that they will probably try and back door her. Dani says that she can’t wait for her speech. Dominic goes over to the pan hanging on the wall and pulls out the tinfoil Franklin turtle and rips it in half. Dani laugh and asks why did he do that … she says that now she is going to some how get blamed for it. 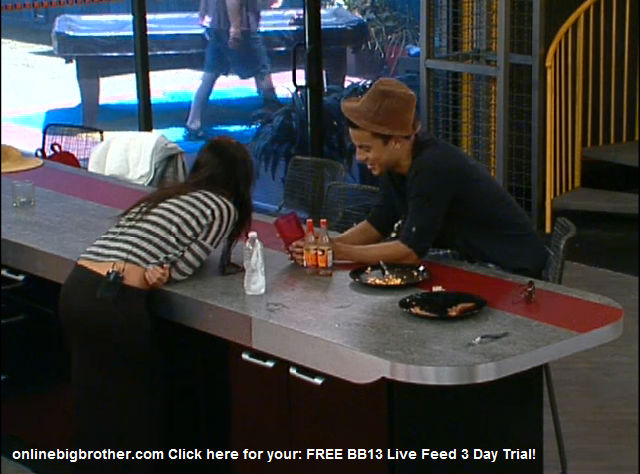 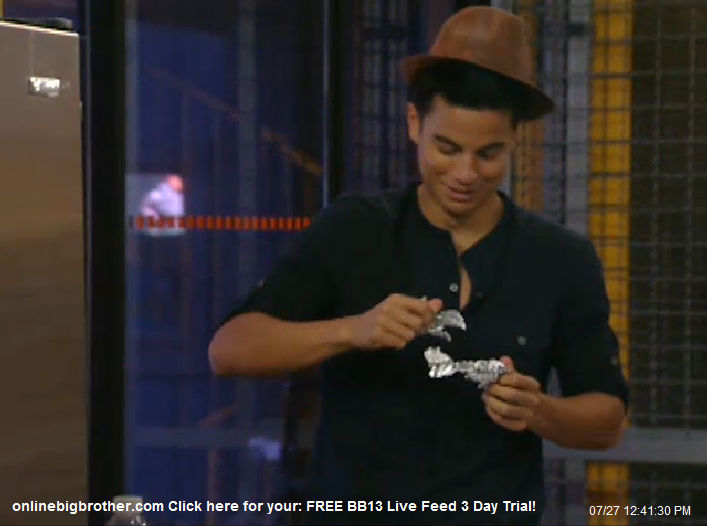 exactly I’m not one of those ppl that flip flops I hated them and anyone in their alliance last year and I hate them and anyone in their alliance this year. And just so were clear being “logical” as brendon always proclaims himself does not mean your intelligent. I’m desperately hoping during Dom’s live speech he makes a crack at brendon jerking off on the internet. God that would make my life

thats due tothe totally one sided writing that paints them as so evil….fair and balanced?nope

the news have been outplayed, and now are upset about it thinking its unfair….fact is JJ and BR were at each other’s throats WITHOUT dani’s help…..they werent handed the easy win….it was the stupidity of the newbies.

yeah because these updates are starting to sound biased….it funny you use just these updates to form your opinion….what are you a democrat?

Tin foil Franklin was a little bitch yo.

Okay, if PT wasn’t going to be voted off now, he will be now for killing Franklin 2.0

I’m glad Fez is finally leaving. His strategy is Dani’s strategy. And her’s suck. For all their complaining, BRJJ are out-smarting them. Call it what you want, but they are killing the Newbies.

Holy shit!! Kalia just went to war with Brendon and Jeff.. BB13 is on YO

ILL WILL *ABBRJJ*
Reply to  Simon

AWWW SHIT she might just eat them…I have no problem with that. Team ABBRJJ

Finally, some good drama going on!!! Even though I don’t like Brendon at all…..I loved that he told Kalia to start washing her own dishes and that she has done nothing but float since the beginning (I refuse to use *day one*, lol) .

This is when I wish I had the live feeds. About time someone called out Lazy Oprah. Plus from the other comment, I’m not 100% she is all female. Maybe Brendan is talking to a man that way too!!

I can’t stand Dani. Sorry, I know that seems to be an unpopular opinion since everybody hates Jeff now for some reason, but I can’t stand the way her and Dom flirt and talk to each other. It’s almost as bad as Rachel & Brendon. See ya Dom!

Jeff is so rude to Jordan and anyone he thinks he can bully which is funny because doing his season he would never stand up to anyone but now he is Mr.Tough guy and Dani made it to the finals with the most pov’s and 2 HOH and ,makes Jeff and Brendan look like a bunch of babies and she has a good fan base because she does not have to kiss their asses and i find it so funny how dumb Brenchel and Jordan is for letting this loser run the house

Jeff was the only one who DID stand up to the others his season, no matter how many times you post that you hate Jeff. We got it “Anonymous”.

ILL WILL
Reply to  Anonymous

I remember last season when brendon was getting in brittney’s face. He didn’t dare try that shit with Lane

Let’s hear about the fight between Brendon, Jeff, and Kalia! C’mon Simon, do tell more!

dawg will have a update rolling shortly.. a lot is going on in the house at the moment.

Thanks for all you guys do to keep us informed, I don’t have the live feeds but I have been coming here for 3 years to find out what’s up in the house. I usually don’t say much but I have donated since I found the site. thanks again for all the work you do, I appreciate it.

Wasn’t they(vet) cutting deals with everybody???

The house meeting is bananas! Grenades are being thrown left and right. Too bad this didn’t happen on BBAD.

Any takes on who gave the best exit speech… best to my recollection its Ronnie it was pretty good, a little on the ‘mean girl’ side but definitely memorable.
On that note…Dani turns me on to nooo end. I dream of a Dani – Porsche sandwich with me as the filling and Dominic at bedside taking copious notes. Hey I’m a giver

Who’s getting it the worse

Why hate the Vets for working so hard? LOL. I don’t even like BR but them & JJ did work it out. It’s not their fault they are so good at this. It’s still early but yes, as much as it’s hard to like BR and Jeff’s rudeness at times, I give them credit for playing this game wisely. Keith and Dom were too cocky at the very beginning. The vets were out numbered but because of the newbies stupidity, they were canned so early!