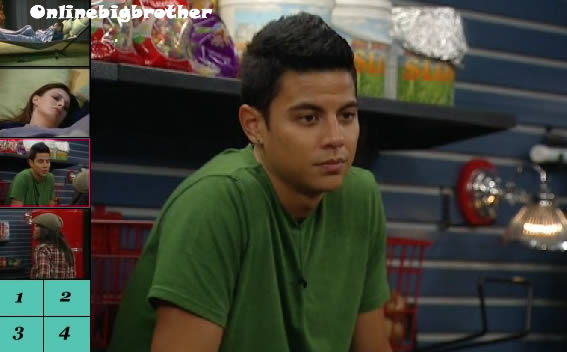 9:13pm Storage room Dom and Kalia Kalia tells Dom that she’s sure that the both of them are safe. Dom points out that Adam doesn’t do anything in the house or the game. Dom tells her that the one thing he knows is Lawon will not go quietly he’s going to cause a massive blow out rolling it all out. Dom doesn’t want people to think he’s with adam because they are couples. 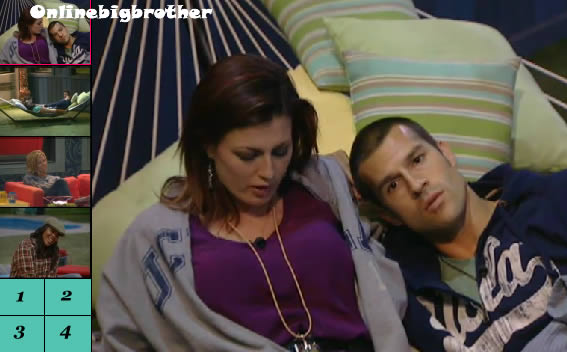 9:33pm Hammock Rachel and Brendon
Rachel tells brendon that when jeff and jrodan called dom up in the HOH they asked him what side will he be on when they start to fight JJ or BR. Rachel says they need to start thinking about what happens near the end and be prepared for a power shift. She knows that neither side wants to get the other one out but they’re always a power in the game. Brendon is surprised that they asked dom that.
Dani joins them. Says that it’s really strange that Adam has been asked 3 questions in 2 weeks. Rachel: “you just don’t think that america loves him” Dani: “Dani umm i dunnno umm maybe. Dani brings up that Jeff and Jordan want Adam to stay and it’s obvious that Adam is on their side. Dani says that the other side wants BR to fire the first shot they are getting together the other players, Jeff and jordan know that dom is not going to work with them. Dani: “trust me dom is not going after you 2”. Dani suggests they take out Adam this week and Lawon next week. She reminds them that there is going to be a power shift and they want that shift on their side. Brendon says if he puts lawon and Kalia and Dom wins the POV we’ll have to put up JJ. Dani is confident that she can talk Dom into throwing the POV and she doubts he would use it to save Lawon and Kalia. Brendon isn’t sure they can trust Dominic to throw a comp. 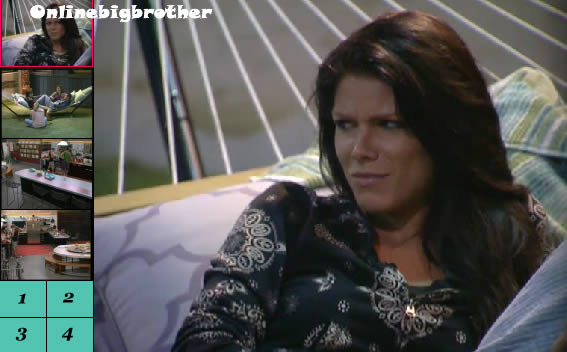 Rachel ask if dom blames them for Cassi going. dani doesn’t think so, “it not like he’s going to come avenge her he’s not stupid”. dani reminds them if a split happens they are going to need the numbers
Dani says she’s going to tell brendon something and she wants to be 100% sure that brendon will not tell anyone this. dani adds that she told rachel this and rachel swore she won’t tell anyone (but 10 minutes ago rachel told brendon)
Brendon: “ya ya ya she told me”
dani explains the story about Jeff and JOrdan asking Dom what side he was on JJ and BR
Brendon: “no she didn’t tell me that ”
rachel: yes I did Brendon” (LOL)
brendon i’m sure he’s just telling you that because he wants us to turn on JJ because that will take out the 2 strongest groups. Brendon doesn’t trust any of the newbs. Brendon says that he just needs to win the POV this week then he’ll take out whoever he wants.
Brendon sys he’s not threaten by adam in any competition. dani and Rachel say that Adam knows the big brother game forwards and backwards. That doesn’t matter to Brendon, he doesn’t think knowing trivia about past seasons is a big deal. Rahel and DAni disagree. 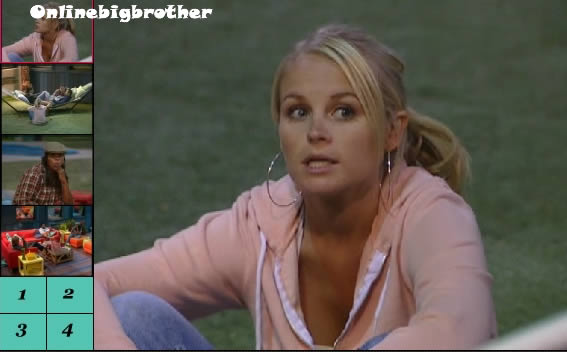 Jordan starts telling them that she hasn’t heard this from dom in awhile but he wants Lawon and Kalia up and if lawon and Adam win HOH she has no idea who he’ll put up. Dani adds “adam will flip on a dime”
Jordan says if she had to choose lawon, dom or Adam she would says Adam and lawon but between Adam and laawon it’s a toss up. Brendon: “I think for me that Adam needs to go”. brendon says that he’s trusting dom a bit more and Adam is to big a unknown. (wow have to update the site graphics the HOH this week is dani)

10:10pm Dani and RAchel Tell JEff they think Adam being asked 3 questions out of the last 2 weeks is kinda strange and that Adam is always going to the DR like Ragan and Annie did last year. They hint that Adam should be the target. Jeff thinks that a pretty weak reason. Rachel says they will talk later upstairs later tonight. 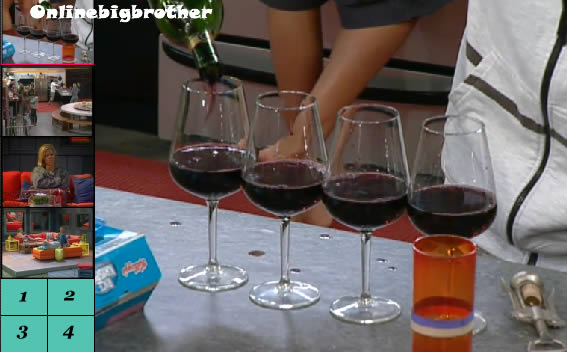 I predict the celeb guest will be Jimmy Fallon. He likes to appear on shows he likes to watch, and I think BB is something he might watch, and I think the silhouette fits. Although, if I’m wrong, then chances are good it will be a celebrity from some movie that’s coming out soon and they’ll do the movie night prize thing.

i think the celeb will be kathy griffin (she needs new material for her next stand up routine) or teresa from real housewives of new jersey.(she needs a house to stay in as shes about to lose hers) better yet the last idol winner :) even better kim kardashian (and her big fat ass) rachoe would flip if kim showed up. imagine the jealousy. rachoe would probably throw herself in the pool and drown :)

Do you even watch the show? It was a male silhouette. Unless Kathy Griffyndor has gone butch, it’s not her.

The Watcher
Reply to  damien666

I want two of whatever he is on. Wow

You can only pick ONE! Plus, I already called Neil Patrick Harris like 3 or 4 updates ago.

Simon, see? The “twist” will be announced this week, which is one week before the golden keys disappear. It will probably be as lame as ending the couples thing in gameplay. Although, I know you’ve said you think they’ll bring a player back, and I have to admit that the way they edited and worded Cassi stuff tonight hinted that she may get a chance to come back in the game later. Even though I like Cassi, I’ll never support bringing evicted HGs back. It’s not fair to player strategies.

P.S. Did you guys notice that even though America thinks Jordan is cute and endearing, America still agreed she sucks.

P.S.A. Because so many comments harp on Rachel, this is just a reminder that Jordan has fake boobs too. Has everyone forgotten that already? She used to talk about her new boobs all the time, and even flashed the cameras a few times. If Rachel did that, many of you would go nuts. So why not the same reaction for when Jordan does it?

Because Jordan seems more humble, genuine and less egotistical than Rachel. She doesn’t present herself to be something more than who she actually is or feel the need to rub everyones face in her accomplishments. Some people still appreciate a girl that doesn’t have sex on Live TV just because she can. It shows she has respect for herself and her family. Someone at home obviously told her not to flash her boobs this year. She probably watched the season and was embarassed. Unlike Rachel, Jordan seems to have changed for the better after her season. (Not that she was horrible to begin with.) She readily admits her mistakes without being argumentative and having others force her to see reason. Oh and let’s not forget she’s less bitchy. I could go on…

Reality_Bytes: agree, agree, agree! I think it is classy that JJ do not have any physical contact. Imagine how difficult that is – they live together for a couple years or whatever and come on the show and completely keep their hands off each other in front of the cams. That shows class and self-restraint. Rach and Dani were actually counting how many times they had sex in the BB house. JJ are awesome IMO :)

I also think it shows that Jeff and Jordon are more secured in there relationship and don’t feel it necessary to have to prove it for everyone to see.

about your P.S.A. Do you really even need this answered?

Did you guys see me on Big Brother tonight? QAZ appeared during the HOH competition :P

Please get that ugly picture of Allen West off the top of your page…eww! I will go elsewhere for BB spoilers if I have to look at him!

that zit likes to travel. LOL

Douchy and the Beast, you have just been served, by Dani. She wants the other two couples to go at it so she is guaranteed a few extra weeks of NO Target status. It is obvious why she has been working Douchy and the Beast…. They are both socially inept and paranoid. JJ are better social players so the possibility of Dani getting caught by them is higher, where as Douchy and the Beast are only talked to as a last ass kissing resort. So what Dani is relying on is simple Douchy and the Beast calling Jeff and Jordan out about Dom. The old “Well I heard you two where plotting against us with Dom.”… What” “yeah”

Had a very shinny nose,
and if you ever saw it,
you would have to say she’s gross.

All of the other house guest,
used to laugh and call her names,
they never told poor rachoff,
her back looks the exact same.

Then one dim lit night at home,
Brendumb came to say,
Rachoff with you nose so bright ,
please light up my ***** on skype.

that clapping guy is scary :)

Orson Wells in Citizen Kane. NICE, I like it.

didnt he play in the 1984 movie (big brother) or write the book or have something to do with with the bb thing ?

Man, you keep striking out tonight. Whenever someone asks you a true or false question, I suggest going with the opposite of what your gut tells you to choose.

LOL I agree nicely done
rachoe probably has pimples on her saggy ass that brendumb likes to kiss :) im surprised he doesnt have herpes on his lips :)

He does or did. Unless it was a cut from the food comp but it looked like a blister. It’s healed over now. You can barely see it. It was on his Lower right lip.

It’s funny how Rachel said that Jordan would be easily influenced & Rachel is the one who is being completely manipulated by Dani.

I know Dani completely runs that side of the house

Did any of you noticed or heard what Brendon was whispering to jeff as soon as cassi left the house and before the HOH comp started?

maaaaan dani is playing the game perfectly so far, this gal is running the house right now

Maaaaan dani is playing the game perfectly so far, she’s running the house as of right now

WHO WANTS TO SEE MY SOILED PANTIES?????

Anyone noticed how rachel let it slip what she and her coworkers do to get extra tips? Damn and she wasen’t even drunk. And they gave her wine in her hoh basket. Will we see Vegas tonight? Wait she only got one bottle.