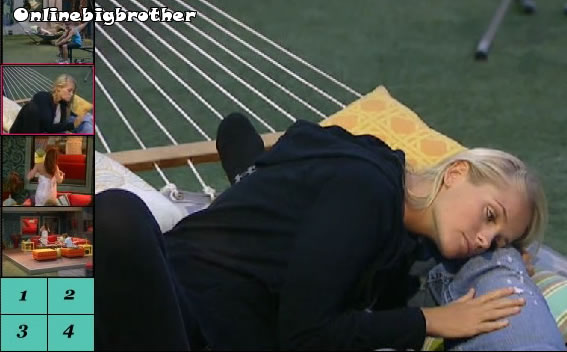 8:00pm Jeff and Jordan Jeff says that there is a lot of Tension growing between Rachel and Dani, “You can just sense it”. Jeff says he talked to brendon but never told him about their deal but he did say that Dani was targeting BR.

Jeff adds that Brendon is hell bent to take Dani out, he’ll fight for that HOH. Jeff and Jordan decide to let brendon have the HOH then he can take out dani and they can say they stuck to their deal. Jeff still feels uneasy about Jordan going up as a pawn, he wants Jordan to go talk to Kalia because he’s worried Kalia and Lawon will flip. Jordan isn’t worried about Kalia flipping but she’s nervous about Lawon. 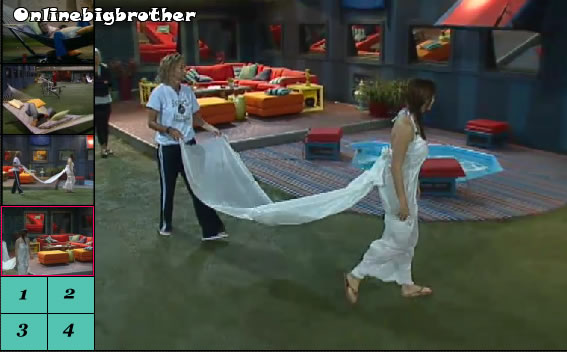 8:34pm Rachel, Shelly and Jordan They are building rachel’s garbage bag wedding dress.. I’m not going to bother watching it’s just too exciting for me. 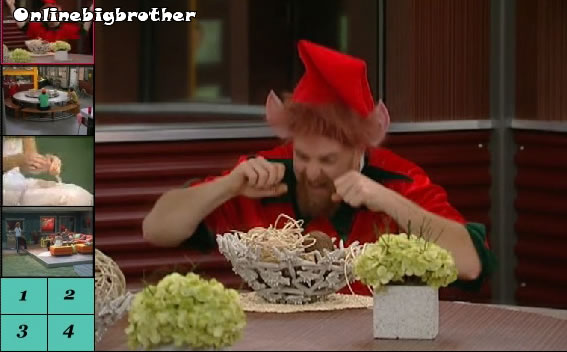 8:35pm Kitchen Adam, Lawon and Dani Adam is talking about how how much he loves 90210. He gets pretty carried away, jokingly saying that if he’s still in the house by the time it’s his birthday he wants to see any of the cast of the old or new 90210 show deliver a cake to him. Dani brings up Tori Spelling being pregnent. Adam says he wishes he had a giant cake inside was Tori spelling pregnant.. then she would have her baby in the big brother house and he would “cut the umbilical cord with his teeth”, “AAARGGHH” Dani: “OH MY GOD” Adam laughs, Lawon laughs .. dani just say “you’re crazy omg”. They all start talking about Adam`s obsession with Tori Spelling. They ask dam what he would do if he really met Tori Spelling, Adam thinks he’ll freeze up, Dani thinks he would squirt in his pants. Adam say it’s all just talk with Tori Spelling she’s married and it not his style to mess around with another mans wive. Dani keeps making jokes that she’s going to have a restraining order against Adam. 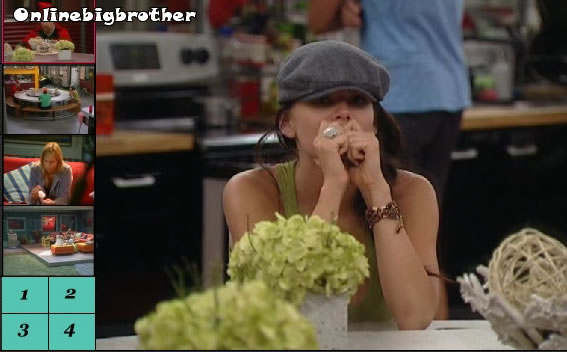 9:03pm Backyard Backyard Everyone is in the backyard chit chatting about

Rachel: “Has anyone had a wedding on big brother”
Dani: “No the closest thing is when Mike Boogie proposed in Season 2”
rachel: “did he like for real legit love her”
Dani: “I don’t know.. it didn’t last long”

Wedding stories predominate the conversations, Dani gets called into the DR. Shelly asks where Brendon is, Adam says he just came out of the DR. Shelly jokes that Maybe Brendon got cold feet heard that the wedding dress has been made so he hit the panic button and ran. Everyone laughs. 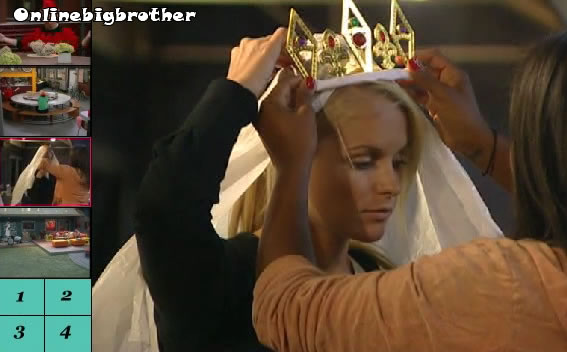 Kalia makes the veil she uses Jordan as a model to size it. Everyone is complementing her on a great job. Porsche tells them there is no booze in the Storage room, she’s bummed out. 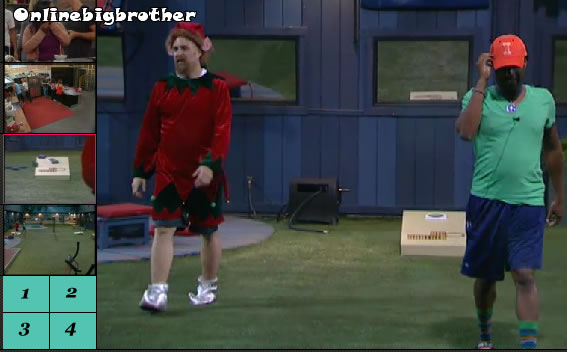 9:30pm Adam and Lawon playing with the bean bags. . Adam asks lawon if he knows what Dani is doing tomrorow. Lawon say he has no clue. Brendon joins them..

Check out the Big Brother 13 Polls

Tori Spelling Adam?? Ew she’s creepy. But Adam is too I guess! For the wedding tonight, I’d like to nominate Shelly to stand in for Rachel’s father & walk her down the aisle.

Jordan just said that the veto meeting is at 11am or noon tomorrow.

Am I the only one who hates rachel?? I can’t stand her!!

Kalia for life
Reply to  Nadz

JJ Fan 4ever
Reply to  Nadz

No, you’re not alone. A lot of people dislike her and how she acts.

What do you mean dude? 90% of the BB fan base hates her. Personally I hate Brendon more than her this season. Not a big fan of Shelly and Porsche either.
Come to think of it I only like Dani, Jeff, Jordan and Adam.

OK cool so me and you are on the same page!! lol

Rachel and her no backbone of a boyfriend – have to go!!

trust me you are not alone

say what you will bout Adam and his game but he is funny and says the funniest shit. I’d keep him in the house just for comic relief (same for lawon)

She won’t fall for that bullshit…

shane
Reply to  ILL WILL

I hope not. Brenchel are in self preservation mode and saying anything they can to save themselves. I love the face Rachel made when Dani insinuated that JJ would still vote her out over Lawon.

what? what? post a link I’d love to see this
thanks

Donavan, found the link of Brendan being his typical “cocky” self, which Simon posted earlier today. Be prepared to see the Full Monty: http://www.onlinebigbrother.com/2011/02/big-brother-12-brendon-villegas-plays-with-himself-on-the-internets/

I hope not! I can’t stand BR. They need to get off there high horse.

I know! I didn’t know about that until last week either. I couldn’t believe it and then I saw his pathetic apology video on youtube. Even the ladies on that show that Julie Chen is on “The Talk” were making fun of him. I can’t believe Rachel took him back. Not so sure if their marriage will last when all the dust from their reality t.v. celebrity status settles.

ILL WILL
Reply to  Marissa

He was dating her at the time. What makes the whole fiasco even funnier is that he posted a YouTube (!!) video pleading for forgiveness.

Brendan’s apology on You Tube? Now I have to track down that one. It couldn’t have been more pathetic than what I saw him doing in those Skype pictures. Again, he’s one sick dude. Seriously, anyone who exposes himself & jerks off to a complete stranger (another dude …. LoL) on a forum that can be revealed to the world, is one messed-up moron. One word for him: THERAPY!

It was a big scandal on twitter. The girl that Brendan was jerking off to contacted Rachel and filled her in on what her boyfriend was doing on Skype. For a while Rachel was pissed and believed what the girl was telling her but was in a bit of denial. When all of the evidence surfaced Rachel had no choice but to believe it. Then Brendan did the pitiful youtube video apology and shortly afterwards proposed with the huge diamond and all was forgiven….what an idiot she is. Ever since then Brendan has been her lap dog. They certainly won’t last long. Either he will cheat, she will cheat, or he’ll eventually get tired of low self esteem and her constant need to be reassured about how much he loves her and how wonderful she is just like we have been watching on the show….yuck. It is all so gross.

The word floters should be a drinking game word lol Ppl would be totally wasted :)

Dani is such an idiot if she falls for the crap that Brendon and Rachel are talking to her about.

Simon this site is awesome. It gets me through late nights with a newborn. I love the quick reference spoliage on the site. Any way you could add a daily event list for a week like Thursday -hoh. FRIday- nominations Saturday -POV etc? Or is it different each week depending on certain event which then that wouldn’t be useful. Just makes it easy to find certain events. :)

thanks for the suggestions glad you like the site.

Does anyone else hate the way Rachel eats? A COW!!

Hmmm I know I’m going against myself on this, but Brenchel made sense in their convo, might be bullshit they could still go back on that deal like Jeff said he would….. Don’t want a floater to win BB13 like they did BB11

To DR.. Yes he was dating her at the time.. I think that’s why Rachael is having “trust issues”…

I wish Evil Dick was in the house so bad! I would love to see what he would do to Brendon and Rachel. He would completely OWN Brendon!

Another thing that pisses me off in this game is that Rachel always talks about getting out the floaters but she’s best friends in the house with one smh I’m sick oh her and Brendon he’s a pussy him and rachel’s relationship WILL NOT last long!!

I think they should vote out adam over that creepy Tori Spelling comment. That lady has a very evident eating disorder and shes a husband stealer… great moral compass too!

I agree pinto Bean is the biggest floater! And I agree that this marriage will never last. Give it maybe a year. That’s MAYBE!

Rachel is a lot of drama but at least she’s not as stupid as that lamb porshe, she keeps talking about winning HOH and being a target, that girl is dellusional.
I actually enjoy watching BR squirm, it will be great if porshe got voted out and the HOH winner would nominate BR again