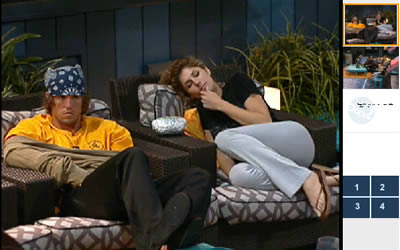 12:20am Backyard Most the houseguests are sitting around chatting. The start talking about the “internet people” and how their glued to their screen 24/7 watching the live feeds. Hayden seem to know a lot about the feeds and tells them a bit about it. He explains that people get a subscription for the feeds through SuperPass. Annie says she’s never seen the Live Feeds before doesn’t really understand them. Rachel jumps in and explains more about the feeds. Matt comments about how stupid and pathetic they are (He’s a big feed watcher) 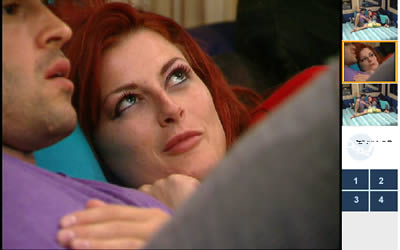 1:35am Spa Room Rachel and Brendon getting a little close. Brendon mentions how he’s trusting Annie more now but is thinking that Andrew is a sinking ship and cannot be trusted at this point. Rachel goes on about how creepy Andrew is, he is always giving the girls a really weird look. Rachel tell him she’s worried that she’s going home because Brendon has deals with people. Brendon tells her he’s trying to keep her safe he has made no deals, his only deal is with her. Brendon thinks he’s going home because everyone thinks he’s such a competitor. Rachel says that is their strength, everyone is scared of them because they are so strong.

Brendon goes over a conversation he had with Hayden to try and pursued him to use the POV on him. Brendon was also asking Hayden if he didn’t want to take him off the block he could always take Rachel off and put Brendon up against Monet, “Its the only chance I got” . Brendon tells rachel that he has sworn to Andrew that he would not put him up and he intends to keep his promise. He mentions something about Hayden not keeping his promise to Brendon.

They briefly talk about how they don’t want to see each other gone. both complain that it’s too cold. 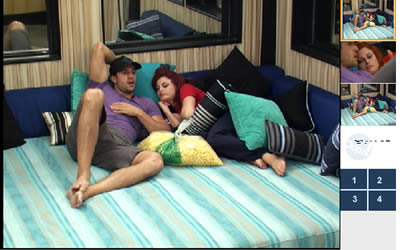 12:45am Kitchen Enzo and Brendon. Brendon is trying to talk Enzo into using the POV on him saying that if Enzo saves him he won’t put Enzo up. He also says he’ll protect anyone that Enzo wants to be protected. Enzo doesn’t agree to anything and isn’t really receptive to Brendon’s pleas. Enzo says he’s going to keep his option open this early in the game. Brendon tells him this is the time Enzo need to make big moves and commitments. Enzo isn’t sure that’s the best idea when it’s only week one. Enzo reminds him that he hasn’t won the POV yet.

1:00am – Backyard Most the house.. Andrew walks in and everything get awkward. Kathy is a freaking space cadet its awesome.

The houseguests are bored…

When did they actually go in to the house? From the way they are talking it seems like they’ve been there for a few days?

They entered the house last weekend, they always get into the house earlier than when the live feeds start.

the houseguests entered the house on July 3rd.