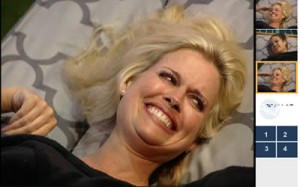 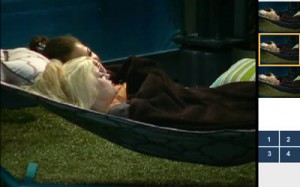 1:50am – 2:15am In the Have Not Room is Ragan, Matt, Brendon, and Rachel.  They are talking about the room. Brendon jumps into bed with Rachel. Ragan says that he really wants to pee in the shark’s mouth.  Ragan then asks Rachel and Brendon if they are going to get married. Ragan tells them that they were looking at each other with stars in their eyes.  Ragan tells them that he really wants them to be the first in the Big Brother house to have a baby.  Brendon and Rachel are really flirting with each other and then Rachel says that she wishes she wasn’t a Have Not so they could sleep together.  Brendon tells her 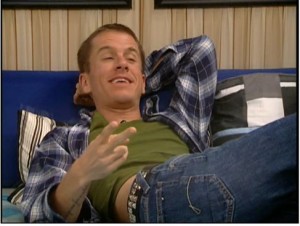 that he’s already thought about that a million times. They tell each other how attracted they are to one another.

In the bedroom, Enzo and Annie are talking about how bad Kristen’s fart smelled earlier. Enzo then farts and Annie runs out of the room yelling Eewww…. gross that stinks!!  Enzo leaves the room to get ready for bed in the bathroom.  Enzo starts telling people how Kristen got mad at him for farting but that she farted when she was laughing and that that really stunk.

In the lounge room, Annie joins Rachel and Brendon.  Brendon is discussing why it would be better for Hayden to keep him and get Monet or Kathy out this week because if Andrew were to win head of household next week Brendon is the only one that could get in Andrew’s ear and keep Hayden safe.  Brendon says that he wants Hayden to commit to a deal before the power of veto is played so that he knows he isn’t being played and he asks Annie to commit to voting to keep him along with a strategy of keeping each other safe next week. They all agree that if Rachel is up against Kathy or Monet then Rachel wouldn’t be evicted.  Annie leaves the room. 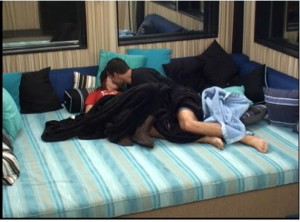 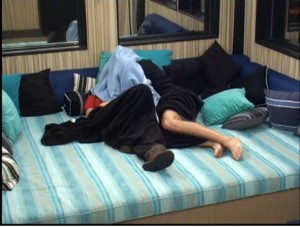 2:50am 3:15am In the Lounge room, Brendon leans in and starts kissing Rachel.  Then he grabs the blue blanket and puts it over their heads to continue making out.  They are really flirting a lot. Rachel keeps laughing and giggling at Brendon’s jokes. Rachel asks Brendon what turns him on and where his favorite place to be kissed is… Brendon tells her that his favorite place to be kissed is his on his chest. Rachel says that’s not fair. They continue to make out, and then Rachel tells Brendon that he’s a big trouble maker.  Brendon responds by saying no, I’m not.  Rachel says what a way to kick off the live show.  Brendon tells her that he’s going to take a cold shower.  Rachel asks him if he really is going to… And Brendon says no not really.  Rachel says that she going to go off to bed to her my cold room… They both leave the room.

3:30am All the houseguests are asleep…

I was so confused reading the recaps because they kept mentioning Brandon but then they’d also mention Brendon. Having only watched 1 episode so far I obviously don’t know anyone’s name yet so I was thinking this is going to get crazy with such similar names. Typo, gotcha.

So far seems like the biggest group of douches yet. Didn’t like any of them and that creepy guy with the Justin Bieber hair is just icky. As is Enco the Jersey Shore cast reject.

ya i was spelling brendon wrong all night.. a little rusty i guess. Enzo being a Jersey Shore cast reject is right on the money.

I noticed on the show that BB wanted the sab to appear to have a mans voice. Could it be a woman? I’m leaning that way.

I was thinking the same thing. I’ve been watching the girls closely to see which one might start stirring up stuff. I’m hoping it’s not someone obvious like stupid Andrew or someone like that. I want someone slick like when Dan was America’s player

I didn’t say he was the best player, just that none of the houseguests suspected him. I’m just saying that I’m hoping the sab isn’t too obvious about themselves. (like Andrew) That would suck!

I think we’re just rusty having trouble keeping up with everything…. Or It could be the site cacheing being too aggressive i’ll look into it, thanks for bringing this up

LOL, yeah I don’t want to jump into a conversation that has been dead a long time ago. ha ha.

You guys are doing a great job! ( don’t want to sound like I’m complaining) Love the site!!1

Don’t worry Kelly we don’t think you are complaining.
Glad your enjoying the site this year :)

We love this site. Every time BB rolls around we come here. It’s easy to remember the web addy and the first thing we see are the little cast pictures with the HOH, POV or NOM. Love it!