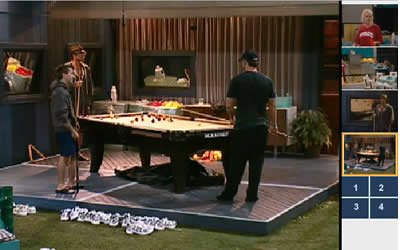 10:55pm Pool Table The Mafia – Enzo’s talking about getting rid of “ANDY/Annie”(andy WTF is he saying) He goes over when “Andy” was saying that Enzo is in a gang implying that he’s tight with hayden, matt and Lane. Enzo’s getting pretty animated about it saying “Wwwwwhat the f**k you talking about i’m not in a gang… f**ken dankey” , “I told Andy flat out to yo now f**k that” (he’s he said that) “I can’t wait for this f**ken POV we’re picking people off dude” He starts shooting some pool and continues “There we go there we go i’m coming at you, look at that fucking shot” 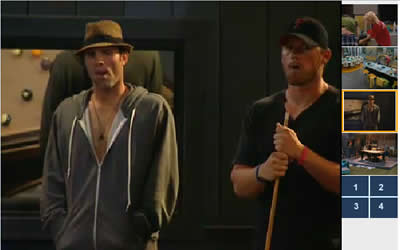 Enzo goes on about Andy and how Andy has to go… They have no idea who kristen is going to vote for… They all agree she’s a wild card but perhaps not a strong player. Enzo stresses how Annie is a strong player “She’s playing to win.. man” He goes on to say “britneys a f**ken floater man” (looks like man is this years dud). He tells Matt how silly it was when Monet was crying after what Rachel did. Matt has no idea what the f**k he’s talking about.. Enzo explains that rachel gave Monet a face… (omg… lol ) 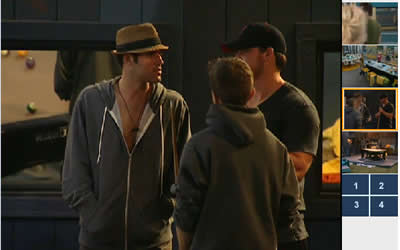 Enzo now says he wants Andrew out next week Matt agrees Enzo keeps barking “I don’t trust Andy.. I don’t trust Andy for Nothing”.. MAtt grows a pair and tells him they need those “gang” rumors to end “That Shit Needs to end right now” Enzo agrees. Enzo tells Matt they need to go up and talk with Hayden and figure shit out he doesn’t feel comfortable talking outside around the pool table. Enzo is clearly getting paranoid as f**k.

Enzo, Matt and Hayden talking about getting Andrew out Enzo’s pissed becuase 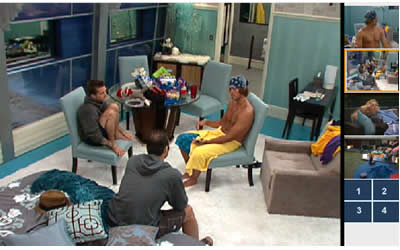 “andy” is telling everyone Enzo has a gang in the house. They compare notes enzo share that Rachel is saying she’ll take Brendon off the block, he’s been trying to convince Andrew not to use POV if he gets it but he’s not very receptive to the idea. Hayden wants rachel to stay and brendon to go home but if brendon goes off the block they’ll put up Kathy and Rachel goes. Briefly they discus putting Annie up. Matt think they have the game in the game Matt tells them how awesome their group is he has the next 4 weeks all

planned out Matt “where in week four we’re coasting”. He further explains to them the plan, Brendon goes home this week Andrew goes home next week. Matt later tells them not to get to cocky… Enzo goes on to warn them about Annie he thinks she’s a strong player.He tells them he’s trying to make a fake alliance with her for the next 3 weeks but after that she’s gotta go. Matt brings up how Annie tried to play down her friendship with Brendon after he went up. They decide Annie goes week 3.. (LOl they have it all figured out i guess they’ve won lol) All three are worried that Kristen is the big wild card she doesn’t seem to care about the game and is kinda “f-ing Crazy 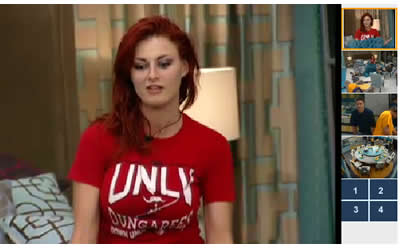 Enzo wastes no time and starts bitching about Andrew “He’s f**kimg Shady man… why doesn’t he come in”. (Andrew had followed Rachel up and looked inside HOH to see who was there then he ran away). Matt Says that Andrew’s been doing alot of sneaking around and making up stories… Rachel thinks Andrew hates her guts and thats why he didn’t come up.. Matt doesn’t think so they’re just chating and Annie joins them… doesn’t waste any time and tells them Andrew is a creep… no real game talk

11:40pm HOH Brendon, Annie, Enzo and Matt and Rachel. You can here Enzo screaming how awesome Big Brother 12 is going to be this is what he says “we got fake titties we got it all we got a jew we got a italian don’t worry we got it all “ Brendon mentions to them that he doesn’t want to be on the block he wants to play the game. Enzo shrugs… They start laughing about Kathy saying how she’s all f**k$d up in the head but is very sweet and kind. Enzo tell them she’ll be called “Have nots” because theres no way she’ll win any competitions. Britenay joins them and They all start talking about how creepy Andrew is and how we went to on of them and talked about their boobs. The girls are all building up his creepyness to the guys.