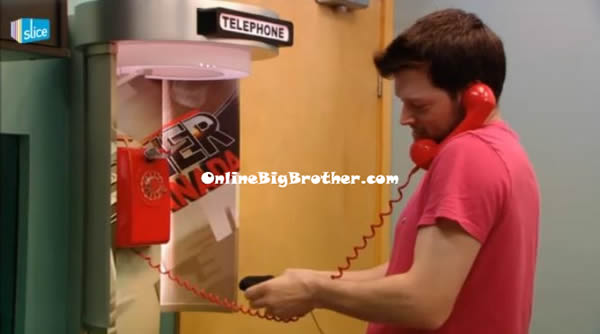 5pm Big Brother switches camera 3 to the storage room to point at the telephone. The telephone lights start flashing and the camera zooms in on the storage room door handle. After 10 minutes of staring at the door. Andrew is told by big brother to change his battery pack. You hear him say why it has a green light. Andrew goes into the storage room and changes his batteries. The phone rings and Andrew says ah! He answers it and no one is there. He hangs up and it rings again. He answers and says yup, okay. Okay. He laughs and says oh god. Okay. Does it.. Thank you. (You can’t hear what is said on the other end of the call but it sounds like he has been given a task that will be hard to complete.) He then hangs up the phone. He grabs a pop out of the fridge and leaves the storage room. He goes back to the kitchen and pretends like nothing happened. He comes back into the storage room and says under his breath it has to taste bad. He is looking through the fridge and say I’ll put that sh*t in there!

Video of the telephone call will be posted here:


Andrew’s possible task: (? Make a bad meal that everyone pretends to love ?)
5:30pm – 5:40pm Andrew goes into the bathroom where Emmett and Topaz are and tells them that he wants to make dinner for everyone because he feels like the house is a bit divided. Emmett and Topaz tell him that would be a great idea. He tells them that he will make chicken carbonara. He tells Topaz that he is sorry that the havenot wont be able to eat it but that it will be good for everyone to get together and eat. He says they can eat their poutine and that they can play cards after. Andrew starts setting up the kitchen table with the place mats. He tells Alec that he is going to make the dinner for everyone because today would have been his dad’s 70th birthday so he is going to make his dad’s favorite meal chicken carbonara. Everyone tells him that it is a great idea. He says that it will help him be able to focus and not think about his dad being passed away.

6:10pm – 6:30pm Talla and Topaz are in the bathroom talking game. Gary then comes into the bathroom and complains about how Andrew and Suzette tried to tell him that although he wants to be famous he doesn’t want mobbed and followed where ever he goes.

Meanwhile out in the backyard, Liza, Alec and Andrew talk about the lack of romance between Liza and Tom. Liza explains that Tom left someone at home that he likes so we just keep each other company but haven’t kissed or anything else. 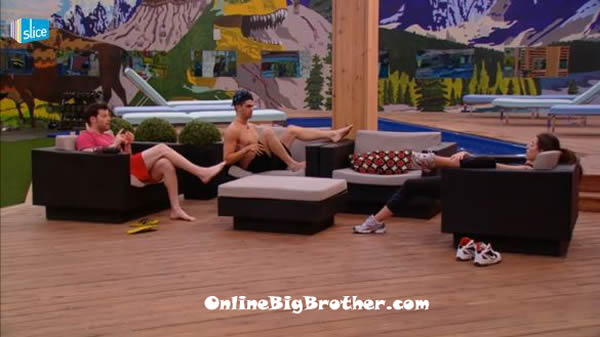