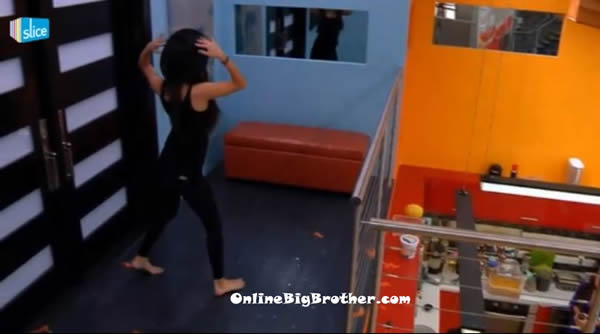 2:50pm Talla comes down from the HOH room and asks Alec if the wants to see her dance. Alec asks if it’s a sexy dance. Talla says well yeah its me dancing. Talla then goes up to the HOH room to grab the music player and dances outside the HOH room door. Alec barely watches and she gets mad. She gets nervous and stops. Aj telling one of his random stories.. 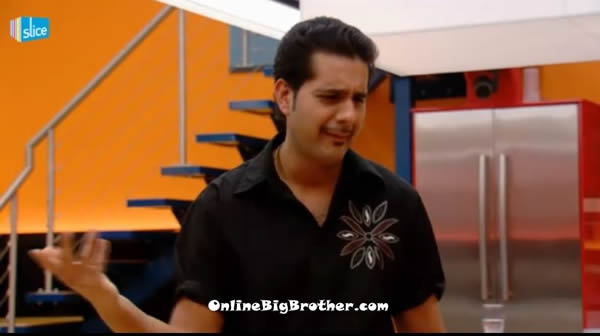 Meanwhile Emmett and Jillian are in the havenot room talking about random things. Jillian starts talking about how she isn’t sure they should trust Gary. She says that Gary is willing to make all the power moves. She says but he turned on us the minute we didn’t want to do what he wanted us to do. She says that he is apathetic. She tells Emmett not to put all his trust in Gary. Emmett says that he hasn’t. They leave the havenot room to head into the kitchen.


3:30pm – 3:45pm Most of the house guests are in the kitchen talking about how the Power of Veto ceremony should be at any moment. Tom and Liza are out in the hammock talking. Tom says that his own alliance is leaving me up there to fry. He says that he is going to have to use them like they used me. Tom says that he can’t think that if he is evicted he still gets to see Liza. He says that he has to win this game, I need to get my mom a car and I need to pay off my truck. I am not leaving with anything less than 20 Grand. Big Brother switches the live feeds to the hush hush screen..

4pm The Power of Veto ceremony is happening right now. Alec holds the Power of Veto this week and has stated numerous times that he will not use it on either of the nominees (Tom / Liza).

I hope Alec does not use the veto so than Tom Almighty can leave on Thursday..with his girlfriend walking out right behind him.

Amazing website, thanks again guys..been using it for a while, first time posting

Glad you love our BBCA & BBUS spoilers .. Keep posting its better when everyone gets commenting and involved! :)

Roger that Dawg…half the reason I come here is to read the comments too. Some BB fans are as cray cray and funny as the HGs!!!

we need to get the crazy in here