2:55pm Suzette and Gary are in the bedroom doing their make-up and talking about the Power of Veto Ceremony that will happen later today. Suzette jokingly says that in her speech she will tell Emmett if he doesn’t use the veto on her she will be coming after him. Gary asks can you imagine if he did use it on you. 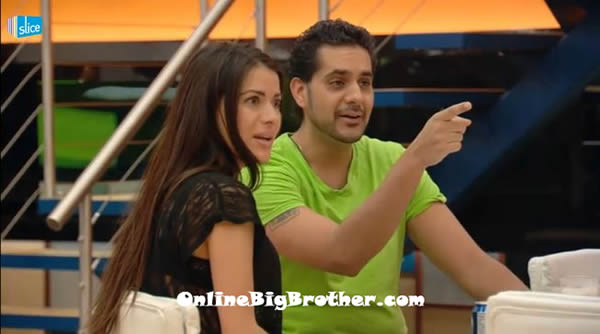 3:20pm – 3:40pm Andrew and Alec talk to Talla in the kitchen. Andrew tells Talla that he can see her breasts through her shirt. Alec says that when he looks into her eyes he only sees unadulterated joy. Talla is really confused and says that she doesn’t know what unadulterated means. Alec explains the meaning and she is still confused. She then says that she wants to have unadulterated $ex with him. She says I think this is awesome we just found a way ask for casual $ex. 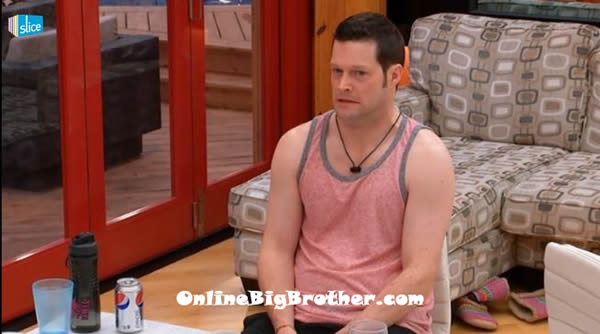 3:40pm – 4pm Big Brother has switched the live feeds to the hush, hush screen. The power of veto ceremony is likely happening now.

Suzette?? Canada saved her butt once already,wat a mistake!! She calls herself MAMMA-BEAR~~~ Mother of 3!! she is a freakshow at best, and Canada should be ashamed of its-self. Why doesn’t she just go to hell home and look after her own family and stop wasting the viewers time looking at her sorry ass on T.V.?
there are many others on Big Brother who deserve the promotion on-screen more than her. 36 years of age and expecting Canada to feel sorry for her BECAUSE OF THOSE DAMN CROCODILE TEARS THAT FAKES EVERY TIME THE SHOW IS AIRED!! Isn’t enough enough yet?? GO HOME MAMMA BEAR!!

Fed up watcher of that kind of foolishness

That was harsh/unnecessary. You sure feel strongly about Suzette, don’t you?

You must be mad at world or something and you sound like an idiot. You shouldn’t make comments like that, am not a Suzette fan but it doesn’t mean I should trash talk her or any one on the show, if you get so mad watching her then stop watching. “Canada should be ashamed of it-self” you should be ashamed of your self for saying that. Lol get a life

I don’t think that Canada was really voting FOR Susette to save her. They were voting AGAINST Tom…………lol.

They new that saving her would hurt his game and would let him know that he didn’t have many fans.

I know I’m not Canada, but personally I voted 18 times to save her because I am cheering for her (although it looks like she’s going to be evicted :( )

The HGs were making too many plans and thinking they were in such control. -t was a vote to shake things up BC even though Suzette is a nice woman she’s annoying as fuck and itd be entertaining to watch people scramble.

That’s exactly why I voted ferret. The viewers will always let you know how they feel when it’s people’s choice.