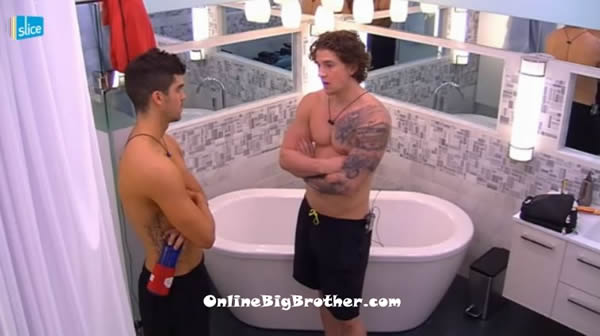 1:10pm Tom, Liza, Peter, Alec, Talla and Aj are sitting at the kitchen table eating chips and salsa. Liza says I can’t believe after all of that nothing happened. Tom says it was just nice to have someone smaller than taller in the house. Aj makes a comment about a leprechaun being in the house. (I have no idea what happened during the last couple hours or if anything did happen.) Jillian comments that she hasn’t poo’d since she went on the slop diet. Meanwhile up in the HOH room. Alec says that he doesn’t think its a good idea to put up Liza right away. Emmett tells Alec that he is going to ask her (Suzette) to come up and I’m going to talk to Suzette and ask her do you trust me? Emmett says so yes, ..I’ve got nothing against you. Tom doesn’t have anything against you.. I am going to prove it to you. Alec says like Gary last week. Emmett says if I win I pull you off and back door Liza. Alec asks Emmett if he is going to tell Suzette that. Emmett says no. (He isn’t going to tell Suzette that the plan is to back door Liza.) Emmett says I talked to Tom and he said he still wants Liza around. Alec says and he wants Andrew gone. Emmett says so we will back door Liza, she is too much of a liability. Alec agrees. Big Brother blocks the feeds again.

aaaahhhhh… i just cant get enough! what if Liza get to play POV and win???? NOOOOOOO!

Yahoo online news has an article about bbcan looking into the cheating allegations. Said Arisa commented it looked like Emmett did cheat.

oh man shits about to get real, i hope this plan works

Goshhhh if Emmett backdoors Liza,i am team Emmet and i hope he wins it.he is under credited but him,Alec and Andrew are playing good.really good especially Emmett plz take out that self absorbed horse faced woman who thinks everyone in the house is beneath her.

I think something big is happening. On Twitter BBC has said: “We are addressing last night’s HOH competition. Tune in Sunday night at 9 PM ET/PT to find out what went down.”

Then about 15 minutes ago: “It’s a busy day in the #BBCAN house so live feeds will be down for the day”

Then a minute later: “Big Brother Canada After Dark will not air tonight but will return March 17th at 2 AM ET / 11 PM PT” I am guessing this means March 17th 11PM which would be AFTER the SUNDAY show

BBCan investigating the cheating allegations. And they’ll find them, a ruling will happen today.

Liza hasn’t won anything yet so even if she played i doubt she would win. As for cheating i have my doubts about anything coming of it if they were they would have said something at the time because the can see what the players are doing i also noticed that the camera never really had emmitt on camera during the comp so bb could want him to win. I am emmitt fan but i found it odd that we barely saw him and unless they got it on another camera they can’t prove it. They would have done it by now and even if emmitt held the ball he wasn’t the only one and they didn’t get disqualifyed.

I have a huge problem with them reduing the hoh at this point if there was a problem then it should have been addressed to begin with but they didn’t and way to much time has past. I have three problems with this

The first problem is that camera’s weren’t really on him so it is hard to say what he did or didn’t do i saw a three second clip of someone holding a ball but i am not even sure it was emmitt.

Secondly, way to much time has past

Thirdly if they redid the hoh then in a sense they are saying that emmitt is disqualifyed but both talia and liza did the same thing and they didn’t get disqualifyed all they got was don’t do it again with that logic all that should have happened was that the host should have done the same thing wihich means he still would have won. Now if the girls got disqualifyed for caring the ball then i woud say ok maybe it would call for a redue but in this case there was no reprucussions for liza and talia so i don’t see why there should be reprecussions for him. In this case it would be unfair to emmitt.

Yes put up Liza become Alec’s bitch and piss off Tom, Jill, Andrew, talla and Peter. Hope Talla wins next week and puts his ass up.

BB Producers were a complete mess with that challenge. Nothing was explained right and when they saw Jillian, Topaz and Alec cheating they should have been immediately disqualified.If they were let off with a warning then Emmett should be too.

Let’s get over it and get on with the game please.

Thing is, that warning mentioned names but was directed at everyone.

Each person doesn’t get one warning, they group as a whole was told not to be because what those few were doing.

Imagine if they sit out Alec, Topaz, Jillian, and Emmett from the HoH redo for cheating? lol

Gary would win it if it’s the same comp..

They’ll have to redo the have not comp to, emmettcoukd be a have not now. IF a HoH redo happens.

He definitely carried a yellow ball in his left hand but can they penalize him when others received only a warning?

BBCA Facebook page just said the feeds will be down for the rest of the day and there will be no BBCA After Dark tonight.

Thanks for the update .. I also saw that message and have updated the post to show big brothers official announcement.

oops, forgot to put my name on the last comment :P i’m excited about the feeds being down! i’m sure this means a new HoH and i’m hoping for gary, sue, or andrew to win :)

check out this page’s picture. I do agree that many ppl probably cheated, but I think if they were to redo it, everyone should be able to compete cause I promise you emmett wasn’t the only one cheating….hint hint alec.

Copyright (c) USMLEWorld, LLC., Please do not save, print, cut, copy or paste anything while a test is active.

I know they are having a luxury competition because on the Play Game section there is an option to select which 4 players get to “View The Screening” and I’m thinking this incorporates the Have/Have Not and maybe even nominations today.

I’m sure they are also addressing the whole HOH competition disaster. THis is the first year so there are going to be stumbles along the way. Look at BBUSA 1 compared to the last one. HUGE difference.

WOW just found out about the feeds being down.. Crazy!!

So what do we do tonight?

Simon I am going to have BB withdrawls! lol jk

A night away from the computer will actually be a good thing. Maybe I can get some stuff done like laundry or dishes. Oh who am I kidding? BB reruns yah!

Thanks for posting that i missed it last night.good grief its sad watching Aneal go and nothing he can do about it,let alone even 3mins to campaign.i really dont know why suzette stayed.oh well maybe i will know why if she atleast stirs the pot and breaks an alliance which i dont see.”sigh” uhuh

I understand why people think redoing the competition is unfair to emmett…but I dont think it is if they redo the competition and allow everyone to compete. Production HAS to do something about the cheating or it will balloon into a bigger problem…there were cheating issues with the A/B game and now this one and now Alec is chatting on the live feeds about cheating in every competition! Something has to be done to get the house guests to follow the rules and I think redoing the HOH and allowing emmett to compete again too is totally fair and sends a message that cheating will not be allowed from this point forward. Yes it would have been smarter for production to disqualify all the contestants carrying balls during the game, but they didn’t and now they have a mess to clean up. No option is perfect, but for the future of the game they can’t do nothing. Regardless of what we all think…I have no idea what they are actually doing while the feeds are down…our ideas are mostly speculation. Whatever they do I will be fine with.

IF they re-do the HOH comp, all the machines/gadgets NEED TO WORK .
If they don’t, it’s not fair, whether anyone cheats or not.
On TV, off to the right, Andrew was rockin’ his piece-o-crap hive like Poo Bear Gone Wild.

There is no way they going to redo the whole thing. It’s over.

Well, this is a hard call because emmitt isn’t the only one who did that they all did but the host is the one to blame it is her job to caught all this and if we see it she could see it and if she called him at the time all would have been fine the problem i have is she let the others off so what makes what emmitt did any different? He was far a head of them if she called him out he would have still won. bbcan is to blame they were not stopping it when it happened and since the others had no consequences then off course they all would do it. As for a redue if it was as simple as them replaying it i don’t think the feeds would still be down in the us they had a similar situation and they just redid the event and the feeds came back up so i think something more to this is happening. Even when in the usa version one girls when nuts and strating through her mic into the pool and had to leave the house the feeds were not down this long.