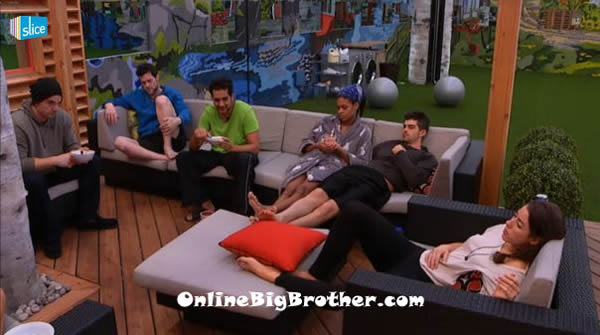 9am Big Brother turns the lights on and shortly after turns the alarms on to wake up the house guests. Andrew, Alec, Peter and Talla are sitting out on the backyard couches. Aj comes out to join them. Andrew asks him what the white stains are on his shirt? Aj says he isn’t sure. Andrew says this is a family show I won’t say. Aj says oh its toothpaste, definitely toothpaste. Tom comes out and says he had a horrible nightmare last night where Canada voted and changed his nominations .. he pauses and say oh wait that did happen! AGGHH! 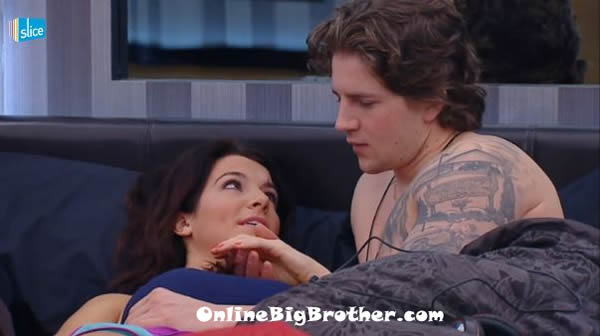 9:40am Jillian heads up to the HOH room. Emmett and Jillian curl up in the HOH bed. Jillian jokes that Emmett should put up Tom and Alec. She tells Emmett that she will let him do his scheming and talking over the next 6 days. Jillian asks of the house guests which would you not want to win the POV? Emmett says Aj and Talla. Jillian starts talking about her family and students seeing her make out on tv. She says oh well what’s done is done. Emmett says whatever you’re the older one taking advantage of me. He says you were the one that came into the shower and pounced on me. Jillian says EMMETT!! Jillian tells Emmett that hopefully he gets Pandora’s Box. Will you open it? Emmett says yes, but it probably won’t be good for me.

10am – 10:20am Jillian joins Tom, Andrew, Topaz and Aj out in the backyard. They wonder if today will be a havenot competition or a luxury competition. Andrew brings up how if Emmett plays in the havenots today he doesn’t think he would give it his all if Jillian was on another team because he doesn’t want her to be a havenot again. He says and no matter what he is a have. Jillian leaves to go inside. The conversation turns to talking about how Emmett sleeping in the havenot room when he isn’t a havenot. They say their isn’t enough room as it is. The conversation turns to Alec cheating in competitions. Alec says that every time he is going to try and cheat ..and bend the rules as much as possible. He says that if I get caught, I get caught. Andrew says well I guess we will be watching you a lot more closely. Big Brother switches the live feeds to the hush hush screen…

10:25am – 10:45am Jillian and Emmett are up in the HOH room talking. Jillian says she is worried that he has a boy’s alliance and that they are trying to get out the girls. Emmett says that he isn’t and they’re not trying to get out the girls. Emmett comments on how Liza wasn’t happy that he won HOH. He asks why, I am Tom’s best friend and she couldn’t be happy for me. She’s an idiot, why couldn’t she just put on a poker face. He knows she does’t like that he won. Emmett tells her not to tell anyone anything and if she does he will find out. Jillian jokes what or I’ll get another one of these on my forehead? (Jillian has a cut by her eyebrow that she got last night when she was singing she ran into the HOH door.) Big Brother switches the live feeds to the hush hush screen again.

does anyone else see the resemblance between Liza and Danielle from BB14.
– They both think they are hotter than they actually are
– Both think their fakemance is like Jeff and Jordan
– Both are desperately trying to get the guy’s attention (Tom and Shane)
– Both talk about how smart they are and good at mental comps but don’t do squat

I feel you…Both are delusonial. Liza is ugly to me, she was better looking than Danielle BB14 though. Liza also reminds me of Erika BB4 and BB7, a little bit of Allison BB4.

So any news on the alleged cheating during the HOH competition? As I said last night, it looked to me like Emmett was holding the last balls while running, but since nobody said anything, I thought it was just me trying to find a reason for him not to win. Why didn’t Jillian and Talla get dq’d, just warned? It looks like BB is just going to let it slide. Last week they could see each other’s answers, and all the guys ended up in a stupid tie breaker. This week more cheating. I voted on the last poll that I am loving the season. I want to change my vote to Dawg. I should have been loyal from the start. From now on, I’m team Dawg! The twist was stupid. Would have been good if the noms were anyone but AJ and Suzette, but really pointless and not fair to Aneal, who was a better player than the two of them put together. Some power shift! Showmances still in HOH making out. I really hope Jillian gets another week of slop so we can be spared the steamy HOH feeds. Two weeks of that already has me gagging!! I had high hopes for this season, but last night’s episode was terrible.

YEAH TEAM DAWG! One of these days I will win a poll! I agree with you that BB needs to start calling them out and eliminating players from comps that cheat because as you see in the video Alec and others I’m sure will just blatantly cheat because they know they can get away with it. Even if jillian is a havenot for another week I guarantee he sleeps in the havenot room with her instead of the HOH room. The power shift was so pointless and dumb… I wish they hadn’t done it and hope they don’t do it again.

yeah, but it’s only been 3 weeks into the show, that’s only like 30 % of the show so far, i’m not going to judge this season until I’ve watched the whole show, there have been some bad twists in the US version, but they sometimes the season redeems itself, i’m not counting this season out because i’m happy that i’m able to watch BB twice a year now

I agree…We get see BB again in June…

Wow.
If Emmett tries to backdoor Liza, who can he count on for votes?

I hope he gets Alec to get Topaz to get Gary AND approaches Gary directly.
Alec/Topaz/Gary = 3

Has he got enough connection to AJ to recruit AJ without Tom or Andrews help?
Alec/Topaz/Gary/AJ =4

Would he have to pressure Tom to go along, or just hope at this point he could trust Tom?
If Peter got wind he was left out of an anti-Liza move, would he ‘fess to Alec? Would Alec trust Peter to join?
Would Andrew get wind if left out, or if approached, see an alternative, and try and pull AJ to an Andrew/AJ/Liza/plus coalition?

Some might say no problem, but if Liza gets in heads –
Liza/Peter/Talla/Suzette = 4, add Andrew for 5, then Tom or Jillian or AJ for 6…

If POV was used for either Talla or Suzette (not guaranteed) and Liza put on the block – (she must see it coming, right?) –
Peter/lets say Talla/Andrew/AJ/Jillian/Tom vote out Suzette and Liza stays.

you should apply for the narrator’s position next time lol relax dude. None of these people are bright enough to think that far, I mean Tom’s big move was trying to get Suzette out ’nuff said!

Just saying Samboooooodee, things could go…not as expected.
Probably Andrew & AJ will toe the bro line and Jill will play safe with Em.
Or not.

I dont think Emmett should go after Liza this week. He simply won’t have the votes. He would need 5.

Let’s say he backdoors Liza this week and puts her up against Suzette. Votes would most likely go

All this will accomplish is a breakdown of the quadro and the shield. I think if Emmett is smart he won’t try this move. It’s too early and just exposes them all.

No, he will have the votes and i don’t see him leaving suzette up unless talia wins pov i think his plan is to take suzette down and put talia on the block. Emmitt is smart he will get the guys on board first at leaat tom.

ANN, yes, it could backfire on both of them!
Take 1 of your last 5 names and give to Emmett.
OK, he gets Liza out, but the House is split.

If she believes she’s a target, how can she back off from her play?
She has to go for it now.
Like Hallie, I think Liza went too hard too soon, and now she can’t let up.
And if she doesn’t let up, some might let her do their thinking for them.

Agree Novan. If he pulls the trigger and it goes then they got rid of threat but if it backfires then he may be in serious trouble.

What a bunch of crybaby whiners you are. Having a twist? in the show does NOT ruin it. It makes it fresh. If all you want is a carbon copy of how shows have gone in the past, you’re about as boring as it gets. Grow up.

Here is the thing liza did this to herself (i really want to like the girls but everything she does makes me not want to). Liza played to hard she has lied to all the guys about things they never said like telling tom that emmit was after him if the guys compare notes it is all over. The thing is tom told andrew that him and emmit want to talk to him alone. Emmitt didn’t see her as a threat until she started campaining against him. What liza doesn’t know is about the quatra allience and that the whole aneal eviction was a test to see her reaction. Emmit is smart he looks like he isn’t playing but he is it is smart to backdoor her. He knows that jill is inlined with the girls so he isn’t telling his plan he has 50 percent chance of the veto being played if he or the other two win pov and if hecan get some of the guys to play he is set. When he back doors her they will tell tom first so he won’t be blind sided and will get the guys he only needs 5 votes alec, topaz and gary for sure she has been gunning for them as well they are close alec so that is3 if he does do it then he tom and pretty sure aj will do what emmitt wants as long as he is not putting up andrew and that is 5 votes and when andrew heres about her wanting him out he will vote her out. The gitls are playing this game really bad especially if liza thinks tom will back her over emmit since tom was at beginning telling emmitt that at some point he needs to cut jill.

I think Alec will rethink the cheating comment after today