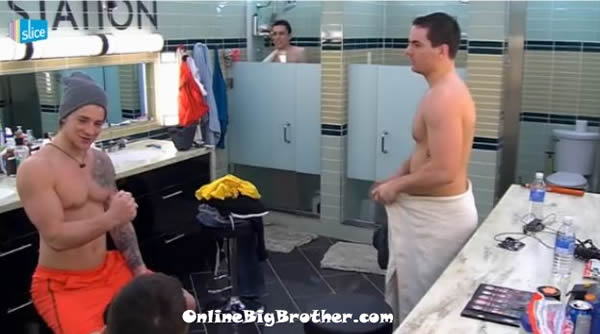 12:30pm In the bathroom Tom and Emmett talk about their “cuddle buddies” and how they get excited. Emmett says that he gets a chub but its not a solid.. ah I don’t know what is wrong with me man. Tom says his is rock solid when Liza is up next to him in bed. Alec wonders if Emmett is just nervous to let Jillian know he likes her. “You just got to cross that plain, you know ..here it is!” Emmett says he has already crossed that plain ..you know .. I am just worried about down the road. Suzette walks in and the conversation ends. 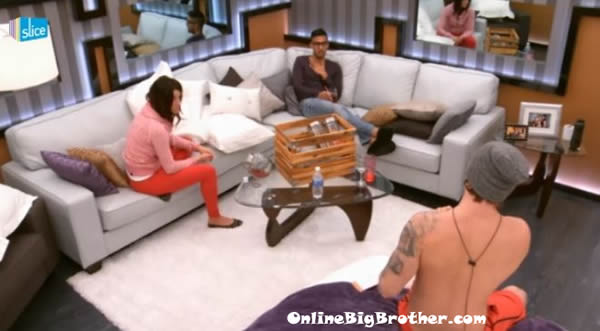 12:45pm Aneal is up in the HOH room talking to Emmett and Jillian. Aneal says that he doesn’t know what is going on. He says that he talked to everyone in the house and everyone says they don’t want me to go. So either everyone is lying to be or something else is going on. Aneal says that the only thing I knew for sure was that I wasn’t being nominated ..and then I got nominated. Emmett asks Aneal if there is anything he has said that could come back to bite him. Aneal says no, nothing .. that is why this is so confusing. Emmett asks Aneal if he voted to keep Kat. Aneal says no .. The only thing I can think of is that I told people that I might give Kat a pity vote but I didn’t end up doing it. I think someone is trying to sabotage me. Aneal asks who Jillian is going to nominate as the replacement. Jillian says she has no clue. Aneal then asks Emmett who he would want up and before he can say anything Jillian says wait this is my HOH.

1:25pm Tom, Emmett, Jillian and Aj are counting things in the house. Tom says that there are around 500 pieces in the puzzle on the wall. Jillian looks at it and asks how they got that. Tom says 60 x 60. Jillian says like 1200. Jillian and Emmett walk away to the bathroom laughing. A few minutes later Tom comes in and says just so you know 60 x 60 is 3600. Jillian says oh.

1:40pm Talla and Gary talk in the bedroom. Gary says that he feels like Jillian gave him a golden ticket this week and so I really want to be good to her, at least for a week. Gary talks about really wanting to get Tom out soon.

1:45pm Jillian and Liza are up in the HOH room talking. Liza says that if do nominate Danielle as the replacement then you don’t owe her anything.. you ensuring her safety when she is nominated is enough. You don’t owe her anything else. The conversation turns to talking about their cuddle buddies. The girls agree again that they will drop the guys when the time comes. Liza says that Tom will drop me in a second, Emmett will drop you in a second. Jillian says not now. Liza says no not now. Tom joins them up in the HOH room. Jillian asks whats the next move. Tom says that the next move is Liza or I win HOH. Jillian says um we have a move before that. Tom says oh, we put up Danielle and vote Aneal out. We have the votes to keep Danielle and she offered to be a pawn anyways. The conversation turn to talking about how Gary beat them all in the POV competition. Tom says its scary he beat all the guys and you (Jillian). They get Danielle to come up so that they can tell her that she will be put up as a pawn. Jillian goes to get Danielle. Right after Jillian leaves Tom asks Liza if she won HOH would she put up Jillian. Tom says that even Topaz came up with the idea the other day. Tom says put one of them on the block and see what happens. Liza says or both. Tom says that if he won he would want to get Suzette and Gary out first though. Tom says wouldn’t it just be awesome to get Jillian out and see Emmett’s reaction. I want to make big moves in this game. Then we can see Emmett break …and if he doesn’t break ..then we still have him. Liza tells Tom how Jillian trusts her more than anything. She’s my ally and target. Tom says that’s perfect. Danielle joins them. Jillian tells Danielle that they are revisiting the idea of putting up a pawn. Alec joins them in the HOH room. Danielle says at first that she doesn’t want to be a pawn. Then after a few minutes she says okay I will do it but you owe me. Danielle says that she doesn’t want to feel like she is controlled. Jillian reassures her that she isn’t. Danielle says that she will do it as long as I am 100% not going home. They all reassure her she is safe. They talk about how Aneal is a sh*t talker and needs to go. Danielle says I fu*king hate that guy ..that c*nt!

(Video of the conversation will be posted here once its uploaded.) 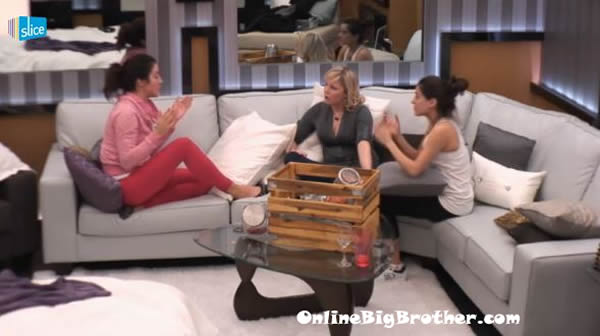 2:40pm – 3pm Talla joins them. Tom gets called to the diary room. Danielle tells Jillian and Talla that she is worried about Tom, he is controlling and an a$$hole. Jillian tells her that Liza and her were just talking about that and how they would get him out eventually. Jillian and Talla talk to Danielle about being in the girl alliance (Jillian, Talla, Liza and Danielle). Jillian says that we can’t let Canada think that girls are stupid. Jillian says we will just let me feel like he is the top dog right now. Suzette joins them and Danielle leaves. Jillian asks her who she want voted out this week. Suzette says Aneal. Jillian says okay good, we are all on the same page. They talk for a bit about random stuff and then head downstairs. Big Brother tells them they will be on an outdoor lock down in 10 minutes.

3pm – 3:15pm Backyard Lock down: Liza, Tom and Emmett workout. The others hangout on the couches and by the pool. 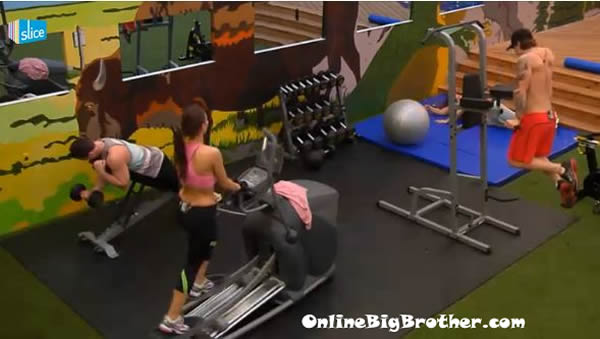 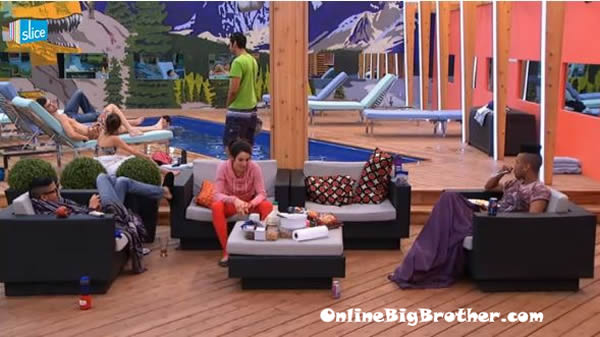 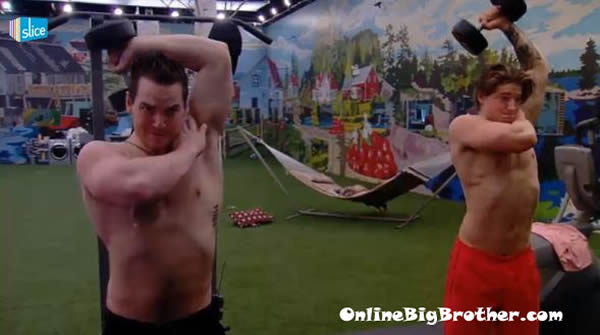 Emmett and Tom talk while they work out. Tom tells Emmett to just remember who is disposable in this game. Emmett says don’t worry about me, my last girlfriend and I broke up because I was heartless. Tom says yeah and I was a jealous cheater in my last relationship. Emmett says she (Jillian) will understand. Tom says that I am not doing the make out thing. I have a girl at home, shes not my girlfriend but I like her. I could have made her my girlfriend before I left but I didn’t because I want to be single. When I get out of here I just want to go travelling.

Hey Simon what’s up with your app. I keep getting an error message or it takes me to a page that tells me to “Download from the App Store” or Continue to Website”? Danielle’s potty mouth has got to go. Hope she suffers the fate of many other pawns and goes home!!! I kinda like Aneal except he should man up, stop whining and start playing the game.

hmm not sure.. I’ll have to take a look. THanks for letting me know.

By the way I would love to see Emmett’s chub…just saying!!!