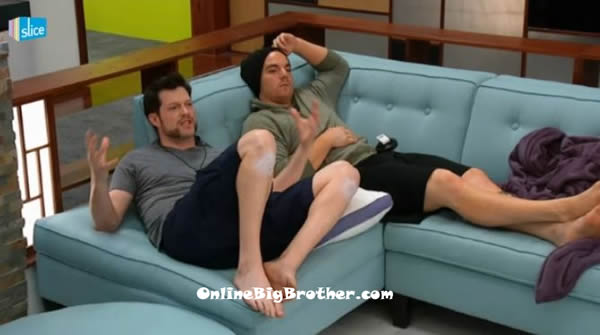 10:45pm Tom and Andrew are sitting on the living room couch talking. Andrew says that he feels like an outsider in this house with all these young people. He says that if he wins HOH this week he is ready to make some big moves. Andrew says if I win you will be up there with me figure out what we should do. Andrew says that it better be a 10 – 0 vote this week for Suzette to go home. Tom says who knows if we put up Talla and Aneal when Gary is the real target .. then Talla will freak out. Tom says that he is interested to see if Jillian or Talla wins. 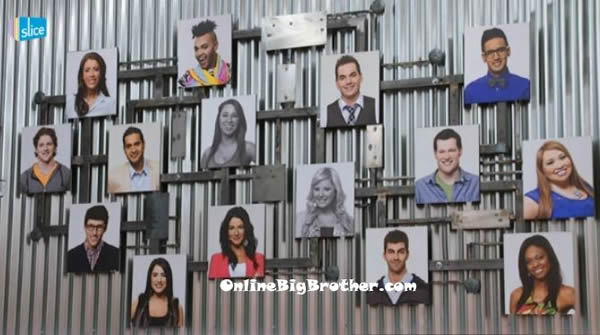 Andrew and Tom think its nuts that Emmett is sleeping in the havenots with Jillian. Tom talks about his nomance showmance with Liza and how they aren’t like that. Tom tells Andrew how he will see all the people flood up to the HOH when you win and tell you so much stuff. Tom says that he respects the HOH …if you win HOH and I win POV and you tell me not to use it …then I won’t use it. Andrew says that he will not leave the house with any regrets. Tom tells Andrew to pay specific attention to who really plays hard in the Havenot competition but drops out first in the HOH competition. Tom says that Peter was doing really well in the havenot but he doesn’t do well in the POV or HOH competitions. So think about that when you do your nominations. Andrew says that he is going to go balls to the walls tomorrow. Tom says that he will be watching closely to see who plays hard and who doesn’t. 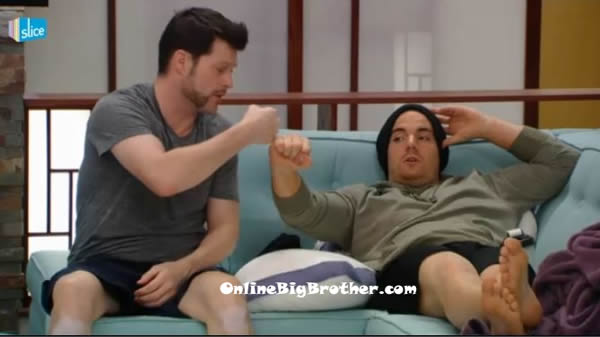 11pm – 11:30pm Tom, Alec, Andrew and Aj are in the kitchen talking about past season of Big Brother and other random things. Topaz, Suzette and Gary are in the hammock chatting about their lives and other things. Meanwhile Emmett, Aneal and Jillian are out in the hot tub. Aj gets called to the diary room where big brother gives them new microphone harnesses. The conversation turns to talking about movies, acting out scenes and sky diving. Andrew heads to bed. 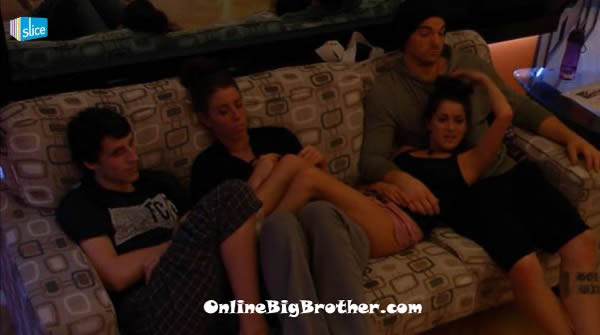 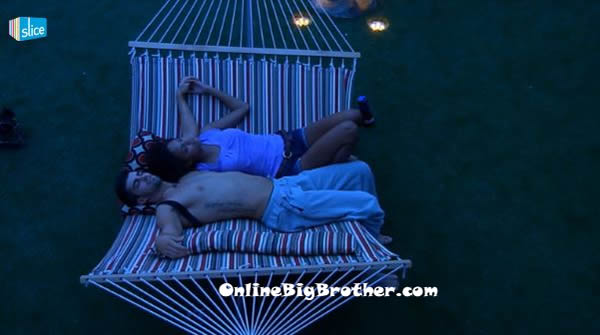 11:35pm – 12am Topaz and Alec are laying in the hammock together talking about what the head of household competition might be like tomorrow. Alec says that if he was a view at home he would want Andrew to win. Topaz asks why? Alec says to shake it up. Topaz says I hope not in a bad way. Alec says oh no we are safe. Meanwhile: Aj, Talla and Tom head up to the HOH room. Talla start dancing while listing to Tom’s music. Tom and Aj talk about meeting up after the season is over. Tom talks about losing his nut when Liza talks in her french accent. Talla talks about and describes her sister. Gary joins them to hangout because everyone else is going to sleep. Talla starts talking about how tough she is at clubs. The conversation turns to fights at clubs and the clubs they like to go to. Talla says goodnight and heads downstairs. The rest of them head down right behind her. Tom says that its his last night in the HOH.. he is going to see what Liza is up to .. and says that he wants to make it a wet night. Liza then comes up to join Tom. Tom tells her about what they were just doing up there.

12am Aneal, Suzette, Topaz, Jillian, Alec and Emmett are down in the kitchen talking about how their week is so jam packed near the end and then nothing. Jillian comments on how its like that for editing purposes. Topaz talks about how Havenots shouldn’t have to be on slop two week in a row.

God i hope not as much as i think tom is a jerk and i really hope someone knocks him off his thrown i really don’t like suzette so i hope she goes she has done nothing except be extremely rude, she hasn’t won anything expect say she is this great compeditar except she has been one of the first out and goes on and on about how she deserves to be there which i don’t get because she doesn’t deserve it more then anyone else and act like a two year old so i hope everyone votes to kick her ass out.

I hate it that the house is on the east coast. It’s friggin 10pm and all the houseguests are in bed! Boring!

I could be wrong but I thought the house was in Edmonton Alberta. There all asleep because they only get 3 2 hour naps a day. These folks need thier beauty sleep after all.

PS if the show is shot in Ontario that’s not the east coast either IMHO. Newfoundland and Nova Scotia now that’s the east coast! :):)

As much as I dislike suzette. I dislike tom more and would love to see his face if suzette stays. So ya thats were my vote went.

Let’s see how many negative votes I can get!

Yes my vote went to Suzzette used all my BBpionts to buy extra points & used hashtag #BBCASaveSuzzette Best chance to flip house out from under Tom dictatior Ship. Might even get to see a Willie Hanz repeat lol