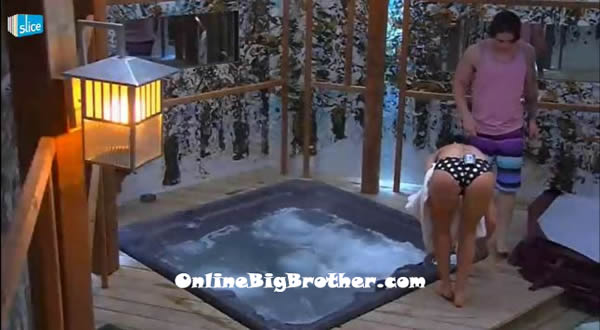 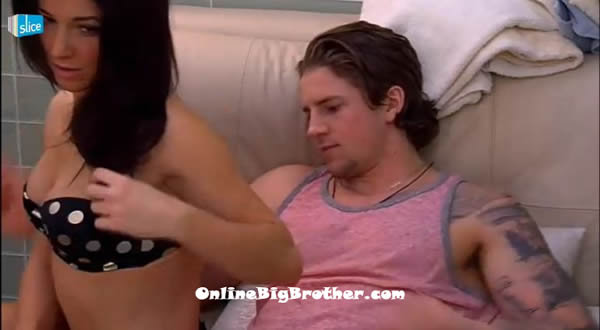 7:25pm Emmett and Jillian are in the bathroom getting ready to go to the hot tub. They talk about the hickies they gave each other. They finish up and head out to the backyard to play a game of air hockey. 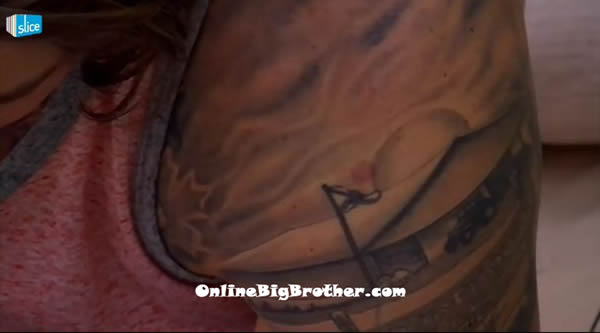 7:45pm Talla, Aj and Andrew are out in the hot tub room talking. Talla is talking about she doesn’t swear this much in her work life. Jilian and Emmett come in to go into the hot tub. Aj stares at Jillian’s butt as she bends over in front of him. “Ah.. HELLO!” Andrew also admires her butt.

8pm – 8:15pm Emmett and Jillian are in the hot tub going over the events of the house just in case there’s a question competition. They are going over each competition, what order they were in and who won what. Jillian mentions that today they are half way through .. for us ..everyone else is over half way. She laughs. Emmett comments that he isn’t afraid of anyone in the competitions now. He says that he wasn’t even afraid of Tom. He says that thankfully I have the slop pass. Jillian says that she is glad he has it too .. and says that if she won it and it was transferable she would have given it to him because he wasn’t good on slop. Emmett says that he is excited about this weeks HOH .. hopefully it’s something I can do well at! The converstation turns to talking about random things like how Jillian thinks moose need to have reflectors on them to help avoid accidents because you cant see them coming.

8:20pm – 8:30pm Peter, Gary and Suzette talk about haters. Gary says that he had to deactivate his facebook account because he had too many haters. Peter explains how on facebook you can regulate all of that stuff.

** Aj is kicked off the show for staring at her boobs **

After Talla says it was a joke but Aj and Gary both don’t believe it was a joke. Talla says that they are right she felt disrespected and uncomfortable when he wouldn’t stop looking at her breasts. She says that she didn’t know to handle the situation. Aj says that he was just in character playing a guy that was leering at her and it was a funny talk show. Gary defends Aj and says that when you wear an outfit with your boobs all out you are asking for guys attention but then don’t like it when guys look. Aj tells Talla that next time she should just slap him in the face. Aj says I don’t need to look at your chest because your most beautiful feature are your eyes. Aj touches her leg. Talla says OKAY why are you sensually touching my leg? Aj says I just touched it, it wasn’t being sensual.

Video of Talking with Talla: Including Talla freaking out at Aj for staring at her breasts.

9:10pm – 9:20pm Jillian is in the bathroom cutting Peter’s hair. Andrew and Aj recount the events of Aj getting kicked off Talla’s show for leering at Talla’s breasts. Andrew says that Aj is in love with Talla. Aj says no.. I am slightly infatuated with her. Andrew asks Aj if he will go talk in the hammock with him about life. Aj says no. Andrew asks why Aj doesn’t give in to his advances. Andrew tells Aj …lets just go into the hot tub with no pants on. Jillian finishes Peter’s hair cut and he says it’s the best hair cut I have ever gotten …in the big brother house. Just kidding it is really good.

Andrew talks to Emmett about how he wants Gary out. He talks about how Gary flirts with him.

9:30pm – 10:40pm Alec and Topaz start their dinner date. Gary tells her have a good date. She says yeah see you in 15 minutes after it took me 10 hours to make.
(Caution – this is one of the most boring dates ever.)
The conversation turns to talking about Gary. Alec tells Topaz that if they didn’t have a secret alliance with Gary he would vote him out next. Alec says that Suzette reeks of death and everyone around her does too. Topaz says that she told Gary it was okay to hang out with her. Alec tells her she shouldn’t have told him that. Alec tells Topaz not to waste her time with Suzette.. talk to people who are staying. Talla comes up and is completely oblivious that they are on a date.
Video will be posted here:

If you remember on ep1, they grouped the houseguests together for a reason. Jillian and Andrew were in the same group because BB wanted her to be his “Sandra Bullock” Didnt quite work out that way. He also said the game, alliances, etc wont get in his way of finding love in the house LOL

Ha ha ha! Thught I was the only one that noticed that! #epicfail!

After LOSEette leaves, Peter will be my most despised. Although the hatred will be no where the same. I wonder who everyone else here will feel that way about? I’ve heard Topaz name mentioned in that topic a few times

sorry that the stream is laggy.. looks like anymore than 80 people and blogtv craps it’s pants.

never mind it was just my computer.. restarting your browser helps

I’m locking in my final 3. Emmett,Andrew and Jillian. AJ or Andrew is winning HOH this week or it will be Peter as HOH. He’s gonna piss of Alec by putting up Gary and Topaz. Regardless who goes home, the remaining nominee will seek revenge and put up Peter and Andrew. then the dominoes will all fall and the last 3 dominoes left will be Emmett, Jillian and Andrew.

I really liked Emmett’s Veto Ceremony Speech. I so wanna see that dude win it all. As long as Peter and Alec don’t flip on him i think he’s got it locked.

I agree that Emmett’s speech was honest and accurate, but I think because most of the people in this house are 2 faced that it may come back to bite him in the a$$. They all say worse things behind Suzettes back but he was the only one respectable enough to say how he feels to her face. Topaz sitting in the bathroom saying “uh huh” like she was bored. Why doesn’t she flip out on Suzette and tell her to shut the f*** up like she tells AJ and wraps off to Talla. I think it is because she knows Suzette will flip back out on her. Topaz is a bully. Emmett and Jillian are going to be the targets in this house so they better keep winning.

So, not telling Suzette to Stfu makes Topaz a bully? Really??! I thought bullying was the other way around. If you called her two-faced, fake, a hypocrite and a patridge in a pear tree (whatever), that would make more sense. I am getting tired of this whole “bullying” thing, NOT every qualifies as bullying… I think we are beating that horse to death already

I think Julilly is a “bully” She always has to have the last word. To sum up your words to sowhat. “Are you Topaz’s bodyguard”. You like to attack and name call people on this board (Troll used to be your favorite word) just because they have different opinions. I vote to “Evict Julilly”. Dont bother responding since I won’t respond to any of your posts any more, I will just thumbs down anything you say because I don’t like you.

I only that this message is not going to reach Talla but I am so upset watching her trying to pull Topaz’s bikini strings undone (a la Tom) and then screaming at someone for staring at her chest? What is going on in this house? Does it create a hormone that incites people to humiliate others? These lines are not just immature, but sexually and socially inappropriate. Even if a woman is naked, doesn’t mean she deserves rape and those thoughts come into play. Noone’s body parts should be exposed by another human being other than yourself. Period. Big Brother needs to assert some sort of guideline here to prevent violations of this sort taking place. Sometimes people react by laughing it off because it’s not an expected act, then later the feelings set in (maybe for some more than others). It is NOT OK

Sometimes I reread the post and can’t correct my grammar. Moving on.

Good for Gary calling Talla out on her need for attention. And her argument about distance and length of time spent staring, that was a factor as to what’s right and what’s wrong, was very weak…and confusing for a man.

Yes she wants the attention, but on her terms. (rolling eyes) Boys, next time, check the product manual.

Yes, Suzette is a bit annoying with the same responses, but I don’t understand why someone like Gary who is her friend, can’t be around her. Who made up this rule anyway? I don’t remember it being this extreme on BBUS. Show some class (Alec mainly). This whole “if I see you hanging around so and so you will be a target crap”….come on. Maybe it will change once the eviced houseguests become the jury….I hope so.