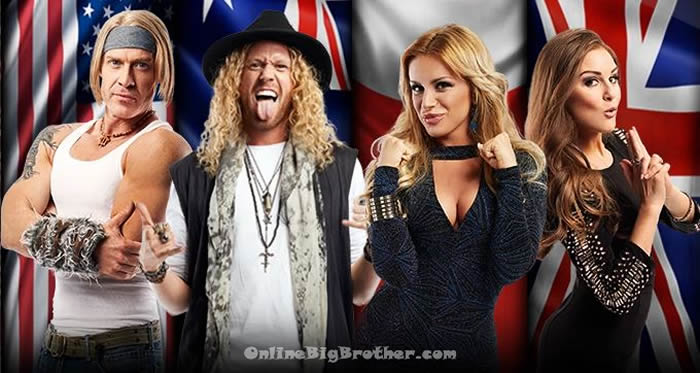 With the première of Big Brother Canada 4 scheduled to air on Wednesday, March 2 on Global some exciting news about the season has been released. The announcement states that for the first time ever, fans will have their say on who gets to enter the the Big Brother Canada house. Viewers will vote for two of four international fan-favourite Wildcard house guests. Only one male and one female will enter the house. The choice is between Big Brother US’s Jase Wirey and Big Brother Australia’s Tim Dormer for the males and between Big Brother UK’s Nikki Grahame and Big Brother Italy’s Veronica Graf for the females. To vote head over to BigBrotherCanada.ca.

We’re very excited to be introducing this new aspect to Big Brother Canada which has never been done in any country before, The addition of the international wildcards makes this season especially unique and unpredictable. Big Brother follows different house rules in each country and these worlds are about to collide!

Jase Wirey (Big Brother US – season 5 and season 7): Jase is instantly recognizable to any Big Brother fan from the popular US version of the show and is still the only house guest to win the first Head of Household in multiple seasons. Known for his physical abilities and his dislike for wearing shirts, Jase is looking for redemption in the Big Brother Canada house.

Tim Dormer (Winner Big Brother Australia – Season 10): Tim is one of Australia’s biggest reality TV stars. As the Season 10 winner of Big Brother Australia, he’s charmed audiences and house guests alike. Even though he’s made his way to the top as a manipulator, he’s clearly rooting for a fair game, and often stands up for the underdog.

Nikki Grahame (Big Brother UK – has played in a total of five seasons): Nikki Grahame is quite simply a Big Brother franchise icon, and she’ll be the first to make that known! Her behaviour – most notably her epic diary room temper tantrums – is legendary. She has appeared in five different seasons of the series and also had her own reality series, Princess Nikki. In 2006, her first season on the show, she was the 12th most written about person in the UK.

Veronica Graf (Big Brother Italy – Season 13): Veronica is the most famous and most talked about Italian houseguest ever. Although commonly seen as a sexy Playboy bunny (she posed in the Italian edition of the magazine), she has also studied business and economics. Sure to stir up controversy, house guests will not be able to judge this book by its cover.

Want to watch the Big Brother Canada 4 live feeds? Bypass the geoblocking with HideMyAss VPN and be Canadian Anywhere:

Vote for Nikki she is nuts. She will blow your mind.

I have a feeling that Gary will also be a coach.

I just hope there’s a way we can watch the episodes in the U.S. because it seems like most of the VPN’s like Hola don’t work on the Global TV site anymore and that’s really the only place i think we can watch. So hopefully someone will keep the fans outside of Canada updated about that.

I think they should have just chosen 4 BB US house guests. Most of us have no idea who those people are.

OR how about 4 previous CANADIAN players since it is big brother CANADA ? ugh kindof think it’s stupid to have non-Canadians on the show.

I think all US players would have made it feel more like BBCAN isn’t good enough on its own. Having them from all over the world opens it up to different formats and playing styles. Jase is probably the most boring houseguest out of the bunch. Tim and Nikki are EPIC if you’ve seen their seasons.

Tim Dormer is hysterical, smart and really kind. If you haven’t watched BB outside of Canada or the USA then you are missing out big time! Gotta think outside the box!

i watched BB AUS Tim. he’s awesome vote for him.

Yes, Tim is guaranteed to pull some entertainingly weird stunts without Marsha’s help! Production couldn’t think of the stuff he pulls. You would love his gameplay & live feeds. Not boring at all.
Hell, last year we got excited about glimpsing the hot tub repair guy…

Tim will be amazinggg! And Nikki too. My god, she is nuts. I’m super excited.

I just hope that people don’t vote for Jase over Tim because he’s the only they know.

I say let the girls in, I cant choose between the guys.

This feels like the time we were voting between the tranny and the white girl.

THESE are the people who were chosen? Who, why, what?

Having seen BBAU i think Tim would be great in the house. Would also be fun to see how he deals with alliances and strategizing (which they don’t deal with and are banned from even doing on BBAU)

So excited about Tim Dormer possibly being on the show!

Trust me, Tim Dormer is the one to vote for. He has to be one of my favorite houseguests of any season…in any country…and I have seen all seasons of all English-speaking Big Brothers. It would be amazing to get to see him on live feeds…since that wasn’t an option in Australia. He will bring the drama, shit-stirring, and entertainment for sure.

I’m curious if he’ll still have the same strategy because he played it up for the viewers in the Australian version due to the viewers deciding who would be voted out. However, in BBCan with his fellow house guests voting to evict will he still provide the entertainment? I’m hoping he does, just under the radar.

Oh I think he will still play it up…but he was also very strategic in the decisions he made on his season. He might tone down the deliberate intention of annoying fellow housemates…but in exchange…he will be allowed to form alliances, openly plot and ploy, and persuade others to do his bidding. It will be exciting to see how he will adapt to the rules and dynamic of how it’s played here. I have a feeling that he will flourish at the challenge and have that house under his control before too long. They won’t know what hit them…unless anyone in there has seen his season, knows how he operates, and exposes it to the rest…but let’s hope that is not the case! Either way, it is going to be a hell of a lot more fun to watch than that mandanna-wearing douche-hag. And yes…I meant to say hag. Jace is a broken record. He will not bring anything more to this show than he has in past shows. It wasn’t entertaining in All-Stars and it won’t be now. At least with Tim, we have no idea how he is going to play this…but I can’t wait to find out. Looking forward to hanging out on here for another season, Simon and Dawg. Let the good times roll and the gold-digging commence!

On the other hand, BBCAN does have more of the audience input to change the show than the US version, so playing up to the audience is probably not a bad thing for strategy.

i’m not a big fan of the idea of having former HGs from either other seasons or other countries, because what always happens? the newbies always talk big about how ‘they’ will be the first voted out, and it turns out at least one of these formers end up still in the game by final 6 if not final 2.

Wow, Just that small amount of time watching Nikki and I already have a headache. No watching live feeds with earbuds this year.

Hated Tim in the beginning of his season, but he won me over and he was the one I wanted to win in the end. He is now one of my all time favourites, Something endearing about him, loved his puppet show on big brother Australia!