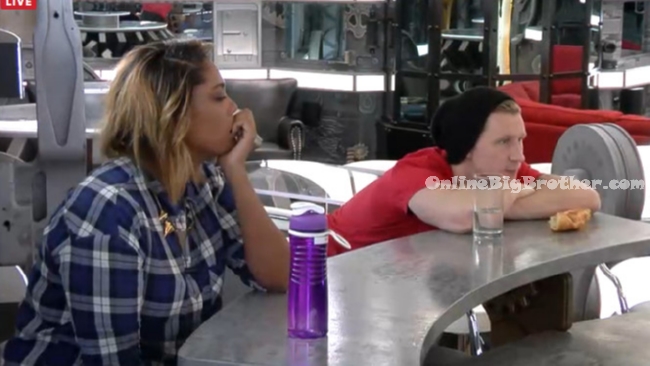 11am The live feeds return from being blocked all morning. We learn that the nomination ceremony took place where Bobby as head of household nominated Brittnee and Kevin for eviction. Bobby didn’t want to get blood on his hands by making a big move so his rational for the nominations was to nominate the two house guests that fell off the HOH competition first.

In the kitchen – Brittnee is sitting at the bar with Bobby. She says she doesn’t want to make them feel anything ether way. Bobby says he feels awful. Bruno comments that its a tough decision. Graig says it made sense. Meanwhile up in the bathroom – Cindy hugs Kevin. She tells him it will be okay. He comments that she’s been through it too. (Being nominated) Brittnee is eating slop. Bobby says its even worse that your also on slop. It just wouldn’t have made sense to put up Kevin and some random person. Johnny joins Britt at the bar and tells her there’s lots of game left. The power of veto.

Bobby and Graig are in the storage room. Graig says that Cindy already wants to backdoor Godfrey. I’ll get her off that. Graig tells Bobby that he’ll get Johnny out next week. Zach joins them and they do a quick CHOP. Bobby and Zach leave and Sarah comes into the room. Graig plays it off that he had no idea about who Bobby was going to nominate. Sarah says that Bobby had told her he would make up his mind this morning. Graig leaves and Sarah says to herself “I’m on to you G” 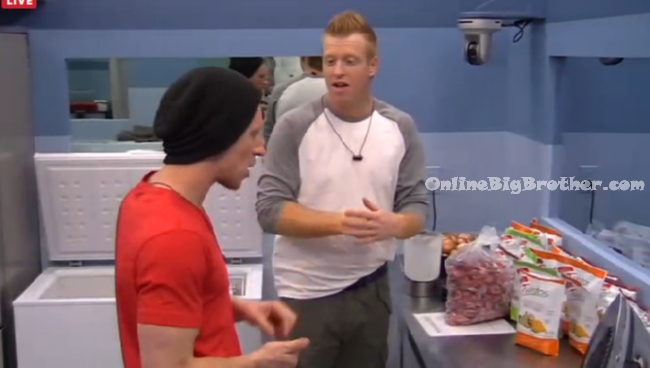 In the bathroom – Jordan tells Kevin that he’s the target. Jordan heads to the bedroom and tells Naeha that Kevins the target. Naeha says that its better for us if the veto isn’t used. Meanwhile in the kitchen – Sarah comes up and give Kevin a kiss on the cheek. He tells her she’s sweet. In the bathroom – Pilar and Ash agree they would keep Britt over a guy. 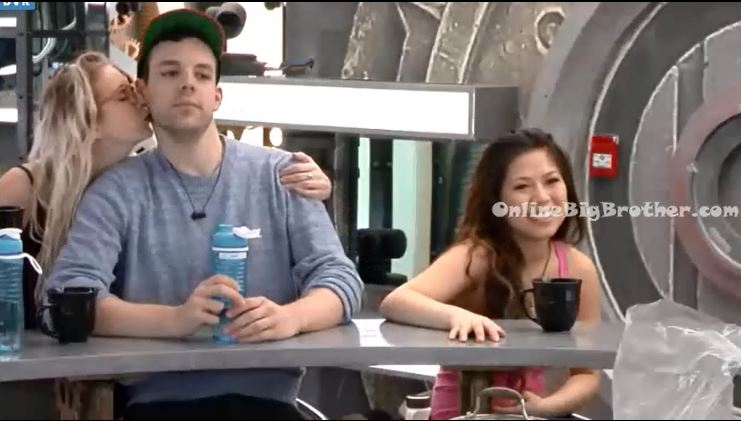 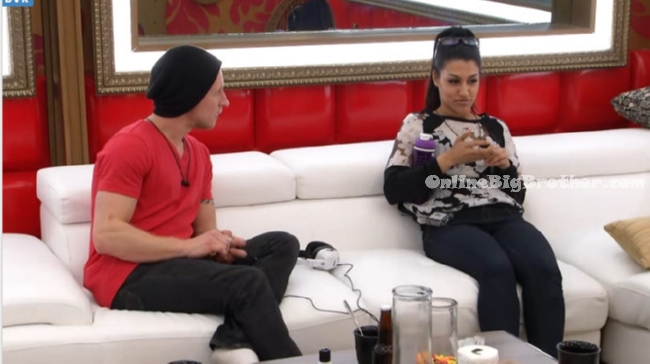 1:20pm All the house guests are on an HOH lock down. They’re all talking about their first jobs.

I’m actually liking Sarah a lot more than I thought I would! But I’m confused on whether she’s in an actual alliance of just kind of there? Does she know what’s really going on in the game at all?

A lot of these girls (Pilar, Sarah, Britnee even Sindy to a certain extent)…I really can’t seem to figure out where exactly they are at all

Nice call and I think there all very lucky the guys are after each other already. Brittany an early fav along with Willow no good comes from being on the block ever. stays the same she “might” be ok but nothing is guaranteed this early in the season.

Why would Jordan tell Kevin straight up that he is the target??? isn’t he completely on the other side of the house???…I don’t get it….

He said it because he wants Kevin to fight hard for the Veto so he can take himself off. Jordan’s real target is Johnny, and Sheyld 2.0 wants Kevin to take out the Chop.

As if he wasn’t going to try to win anyways, I think he’s running the risk of getting caught if they do find out Kevin knows, its too early to stir up things and actively going against your alliance this soon…I think Jordan will end up playing himself out of this game like Arlie last year…thinks he has everything under control too soon…

They don’t want her out. They were talking about who would be the least likely to be voted out.
I like Brittne – she’s a sweetie. (So far)

Shit is going DOWNNNNNN on the feeds. Apparently the girls walked into the bathroom complaining about God not being nominated, and Kevin walked in. He told the Chop Shop, and now Godfrey, Bruno, and Graig (especially him) is pushing for Naeha, Sarah, or Sindy to go up and to go home.

funniest scenario would for the moment would be jonny playing and winning veto and taking off kevin. at least if it’s still can’t nominate the veto winner as a rule… haven’t seen that happen in a really long time, if ever. but i’m sure by now jonny and kevin aren’t even the target anymore. too many girls wanted out godfrey and a couple of the guys are still too worried about a girls alliance. for some reason i’m thinking cindy or naeha or maybe even sarah will end up hot seated by the time kevin goes full self preservation mode. time to see if the feeds are back up to see if kevin has enough brain to back up the bravado to put that into motion.

and apparently according to unanimous above me, that’s what i’m missing on the feeds now…. oh. never mind.

Johnny you want your boy Kevinb to “like” you , here is your chance. Hope he gets chosen for POV, wins and takes Kevin off the block!!

Well yesterday Godfrey today Kevin and tomorrow who knows? Think 1 unintended consequence of the empty house thing is alliances are a little slow gelling. Perhaps a week from now well be able to evaluate the strengths, weaknesses and even the makeup of this years alliances. Bobby is really missing a chance as 1st HOH to put something strong together IMO. He’ll be a target if he doesn’t get his act together. Who says beyond athletic he can do questions worth a lick.
Best positioned today….. Willow
Folks with problems …. Kevin, Godfrey, Johnny and sadly Britnee(on the block)

Girls gain +2 (tomorrow?) on non catty behaviour and staying out of the guys way as the self destruct early. Woman get numbers this group might be smart enough to pull the whole season off. Need a showmance real quick or this could be trouble for the guys.