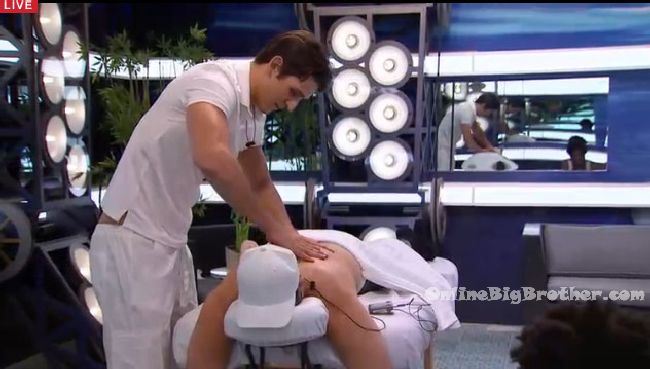 ** The 2 round HOH twist that was leaked last week is once again back up for this week. **

12:50pm – 5pm Big Brother blocks the feeds for the have/havnot picks. They didn’t have a competition but comment that how it happened it was light hearted and fun.

5pm When the live feeds return – all the house guests are out by the pool. Kevin is wearing genie pants. Zach is giving Bruno a massage on a massage table. Zach says “I feel like this could turn into a p*rn*!” Bruno says oh your good at that! That’s the spot buddy!! Zach says they go really deep in the real ones. Bruno says this is a real one! Zach says chiropractors are creepy (LOL Naeha is a chiropractor). Willow says I thought it was going to be something cool like a power of veto pick. Zach says it said knead like as in bread. Bruno asks how long are these massages? Zach says 20 minutes. They comment on how Pili is too nice she took the lobster.

Bobby says he was huffing down food before pantry opened because he assumed it didn’t start until the new slop was given to them. He says asked Big Brother if it was okay but they didn’t answer him. Burno says if Willow’s is now its useless …if its later.. I don’t know man. 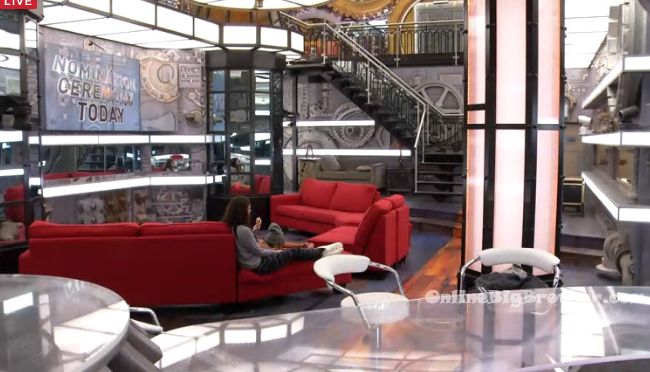 5:30pm Willow says that she feels like she isn’t respected in the house and that she deserves more respect. Brittnee and Pili ask what she means. Willow says just the way things were picked it showed who’s friends with who. Pili says if it makes you feel any better no one picked me for anything thing. Brittnee says I appreciate people voted the money for me. And $42 isn’t nothing. Kevin didn’t get anything but said he was just excited to host it.

5:35pm Big Brother blocks the feeds. When the feeds come back Pilar has gotten her lobster costume. She comments that she’s already hot and sweating. Pilar says so 24 hours .. when is 24 hours. Willow says tomorrow at 6pm. Pilar says you should nominate me just to see me on the block in this. Pilar says she can only take off the claws when she eats or sleeps but has to sleep with the suit on. 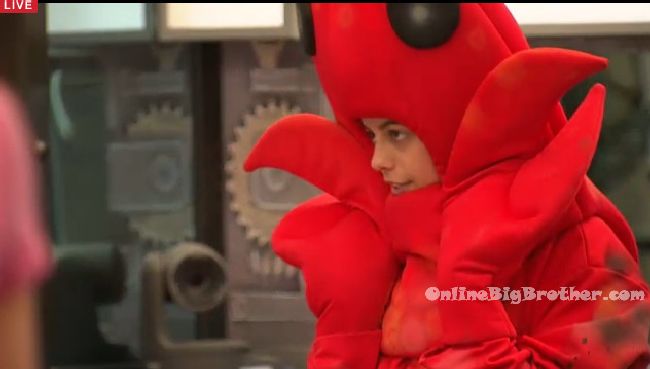 6pm Zach then gives Pilar a massage in the lobster costume. Zach says I’m having a hard time not eating you up. Good thing you’re not boiling. Pili says “ZING!” Zach finishes massaging Pili and then gives a 10 minute massage to Kevin to finish off his punishment. 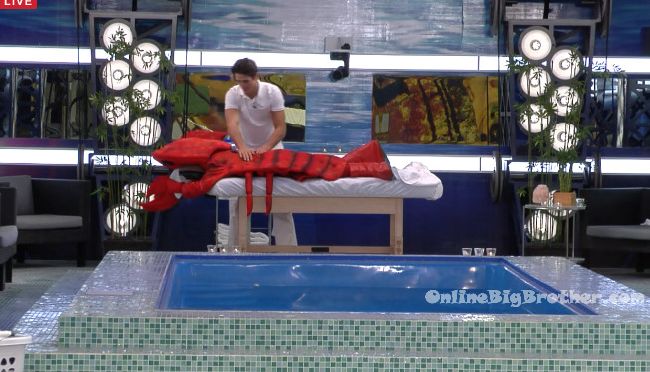 6:15pm In the kitchen Bobby makes some slop to eat while wearing his slop boots. 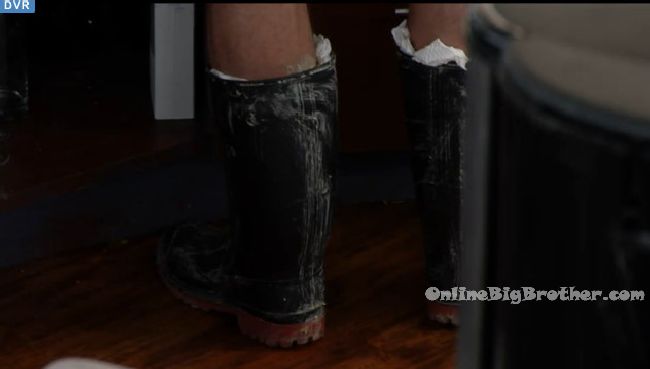 6:30pm – 6:45pm Big Brother puts the house guests on an indoor lock down. Pili heads up to the HOH room. Kevin says I was just thinking about how much I like you. You’re a good person. You didn’t have to take a misfortune. Pili says its not bad its just a costume. Kevin says you mean a lot to me.

In the kitchen – Zach comments to Willow you get to write a letter to the jury. Willow says I hope its later and not now. Zach says its essentially useless unless you’re in the final 3. 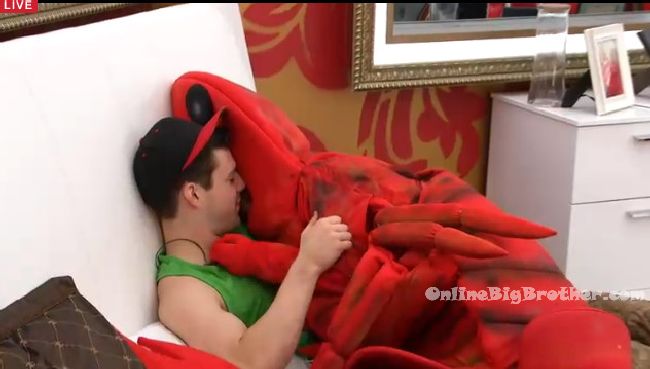 So it wasn’t a competiton for Have nots? People gave was each other gifts and punishments?

OMG I just saw Pili in her lobster costume and I thought it was Kevin. They really look alike. It’s the first I noticed of this.

Who is everyone cheering for? Team #showmance? #thecomplainers? Or #theBBG? Haha

Cheers for Godvin
Reply to  cc

I really want Kevin and god to go all the way, they are the only 2 I can stand that is left in the house right now. Sara, Bruno, Willow voices irritate me to no end. Willow & Sara complain about everything that doesn’t go there way. B is boring with Ash and pilly. Bobby is just dumber than a box of rocks

The Prophet
Reply to  D

So Ash gets a video from home, eh? She has been far too comfortable in this game. If BB can’t get the no-mances to win an HOH…then maybe they should give the power to Canada again this year. If we hadn’t got the job done last year, the First Five alliance would have taken the whole game. And of course Zach and Bobby are Have-nots. How much do you want to bet that Zach will find that secret power…just before the triple eviction?

That would makes this the best season of BB Can ever. Zack with a secret veto…. You gotta love production. This is AG quality stuff here. Captain Canada destroys the house….

I’m kidding this moron gotta go but so do some others. Bruno should want Bobby over GOD. Bobby is never winning 7 questions. Can win a comp or 2 along the way.

LOL, the first five was completely annihilated with Neda knocking Kenny off during a question in the double eviction. Granted it was Canada’s HOH that started the strike against the first 5 but to say that they will plow through the game is pathetic.
The first five also exposed themselves during Paul’s eviction and Neda already has a read on who’s working with who. So even if the twist didn’t occur, Jon, Adel, Heather and Neda will definitely strike against them.
Also have you forgotten that Heather won against the majority of the house during her HOH? It was her and Neda in the end of that HOH competition and it was 4 (Jon, Neda, Heather, Adel) against 5 at that time (Sarah, Sabrina, Rochelle, Kenny, Allison) with Arlie playing in the middle.

The First Five were already plowing through the game up until Canada’s HOH. Not only did getting rid of Sir-Picks-Alot rattle the rest of them off of their game a bit…but it completely knocked Sobs off of hers. She never recovered…and her putting her on the block with him, tipped everyone off to her shenanigans. Plus, knowing that Canada was backing them up surely gave…what was to become the Sloppy Seconds…the much-needed boost to start going after the rest.

But, this is just my opinion…which I am entitled to…pathetic or not.

Please BB let Willow take a nap and just keep the camera off of her.

Can someone clearly explain what the 2 round eviction/double eviction thing is? I feel so dumb but I don’t get the descriptions that are posted online.

That did help thank! But one other question: So Kevin is the HOH for round 1 right? And after one of his evictions goes home they play the next week where the next hoh nominates 3 ppl and evicts 2?

I thought 3 people go home on Wednesday but i’m not really sure. Arisa says it all goes down a week from last night but we all know how reliable what Arisa says is.

Can’t wait to see how Zach handles his slop week

So I am guessing that sarah and godfrey got nothing from the competition. I cannot stand willow game she does nothing and but follows the leader from chop shop, Zach and now Sarah. She needs to win comps because as of right now she should win even if she gets the final hoh. It was funny that britt got $42. And pilli as a lobster. I wonder what kind of videos will Bruno get will it be diary room sessions of each houseguest. Or knowing which alliances or revealing Newport and fortress. I am really hope bobby/britt goes instead of godfrey. BB17 is not all stars again most houseguest are going to view party based on the poster and links they post. I really want to see ian, hayden, and derrick back in the house with one or two America favorite houseguest.

another name
Reply to  BBfan

I thought sarah got to pick the have nots. she chose Zach, bobby and willow (because willow has a slop pass). could be wrong.
godfrey was originally the lobster. pilar got to pick someone else’s prize… and picked lobster.
so godfrey got nothing. sarah got nothing.

Are Bobby’s boot? filled with slop or is he walking that way cause he messed in his pants?

Ashlee does have a great body!

i see seagull is risng in the polls lol

I would vote for Marsha the moose if she was an option.