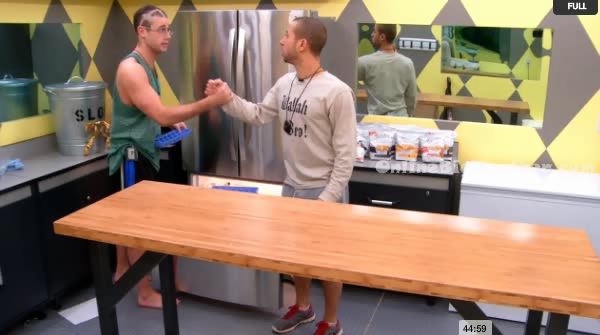 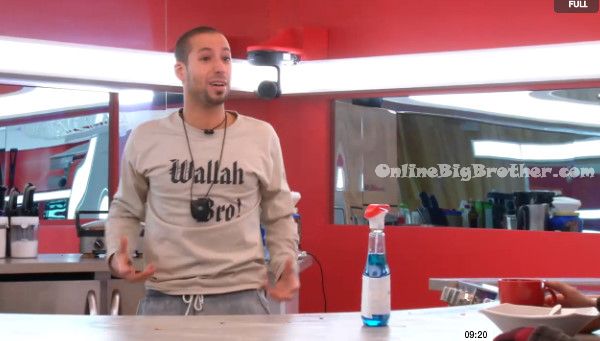 8:30am Big Brother wakes up the house guests. Heather, Sarah, Adel and Paul are getting ready for the day in the bathroom. In the kitchen – Kenny is talking to Adel about how long Andrew’s diary room session was last night. Adel asks if his diary room session was as long as Andrews. Kenny says he wasn’t sure how long he on the couch vs in the diary room. Kenny says that they started to think Adel had gotten out of the house. Adel says that there’s no chance he would use it on anyone, let alone the worst player in Canada. I would never waste it on him. I am really understanding this game now. I’ve got an ace in the hole. 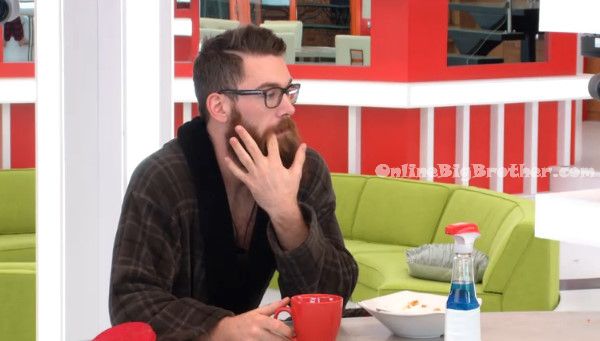 9:15am Out in backyard – Adel tells Paul to keep playing the slop card and going into the diary room saying your dizzy. Adel talks to Paul about how how last night they already started to pin sh*t on you. Jon asked me in front of everyone about if Adel had told about his power. They are already starting to think about keeping heather. Paul says that he never said anything to Jon. Adel talks to Paul about how he was supposed to be laying low and being sad and the other night he was happy. Paul says for 5 minutes. Adel says yeah in front of 5 people. You can’t let anyone think that you know what I have.

UP in the HOH room – Arlie tells Ika and Kenny his crazy BB dream last night.

Out in the hot tub room – Sarah talks to Kenny about Adel’s power. Sarah says that Jon says there is no way that Paul doesn’t know what Adels power is. Kenny says all it takes is one vote. Sarah says then I am exposed. Kenny says but no ones going to know but you, you don’t even have to tell Sabrina. Sarah says okay I know, I am definitely leaning that way. I think its dangerous for our alliance if Paul and Adel are still in it. Kenny says Me, Jon, Andrew, Arlie and Allison … all we need is that one vote and he is out. Him in this house is completely dangerous. Sarah says I know. Kenny says all it takes is one slip up, one chance at an HOH and it not only leaves him here to take us out but it gives Ika the numbers and her little plan to get rid of us. Sarah says I know, I just feel like I am on the bottom of the girls and they’re going to know. I’ve got to figure something, I’ve got two whole days. Kenny agrees and says and also Heather is going to see that people voted for her and to leave is going to make her scared as sh*t.. so she’s going to know that her standing in the girls alliance is weakened ..so she is going to be willing to pop back over. Sarah says yeah. Kenny says take some time and think it over…

9:40am In the storage room – Adel has a quick talk with Arlie. Adel asks if he should tell people about his power today. Arlie says no, not today. Arlie says and tell me before you’re going to do it. Adel says okay. They shake hands and leave the room.

In the bedroom – Ika talks to Adel about their plans. Adel tells Ika about how Arlie knows about the fake power. Adel says when it gets closer to Thursday I’ll tell him that I’m not going to use it and tell him that I’ll save it for next week. Adel says I am so happy now that Arlie is so in love with us. Well not with us but .. Adel says I think we’re okay. Ika says don’t tell him too much. Adel says I don’t, he doesn’t know anything about us. Ika and Adel agree to keep their alliance secret until the end. 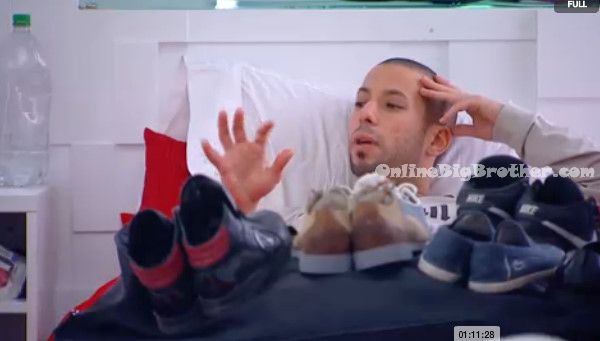 10:15am Most of the house guests are in the kitchen making and eating breakfast.. 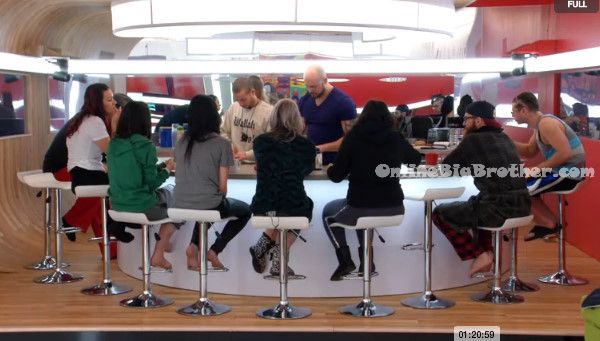 10:20am – 10:45am In the bedroom – Neda talks to Adel about how she’s happy he won the power. She says she likes how its brought a couple people down a couple notches. Adel says that he can’t tell her any more about it but eludes to that fact that he can use it this week or next. Neda says that he doesn’t want to know any more or make him feel like he needs to tell her anything else. Kenny talks to Neda about how much Paul is pissing him off. Kenny says Paul is stretching on the floor above the diary room again even though he’s been told not to since they can hear diary room sessions. Kenny comments on how Jon has been in the diary room forever. Adel says he’s not in the diary room, I was just in there. They realize that Jon isn’t in the house and must be getting a check up with the doctor about his shoulder. Out in the backyard hammock – Arlie talks to Sarah about how he will always have her back. They talk about her missing her family and how this is an amazing experience. Arlie tells Sarah that he will die for the first 5. Arlie says that he knows Sabrina has a backup plan.. she is safe and you’re not. Arlie tells her that she needs a backup plan too. He tells her that he is working on a backup plan just in case and so should she. He wants her to be with him in that plan.

I think that will show next week 🙂 .. the poll was voted on pretty much at the beginning of the week, based on war room Alison, and war room Alison is long gone she’s a different person in the house

to be fair she did say verbatim that she would attach herself to the strong guys in the house.. we just thought it wouldn’t be just Andrew and no one else. Arlie made a good point last night saying how she will be a target once the strong guys go, which is usually early in the game.

Fil, you are correct. Allison did say that. It’s not a way to shake things up though. Even if that is her plan it is a weak plan if it is not backed up with more social play to make in roads with other HG’s. She doesn’t have to align with others, but she does need to let them get to ‘like’ her to lessen the target on her. She needs to get to know where others heads are at.

Not sure, i guess everyone has there own opinions… I personally dont mind Allison.

Anyways i like Adel, but i think he is gonna hurt his game lying about Canada’s Veto to Jon and whoever he tells. Trying to start an alliance based on a lie, will only hurt you when they find out the truth. Jon wont trust him when he finds out, Not to mention, Jons already safe, so telling Jon he will use it on him doesnt mean shit.

As much as i like adel, Him, Ika, Neta and Paul days are numbers.

He’s giving people the impression that the power only lasts a couple of weeks. Hopefully he won’t get into a position where he needs to use it, then no one will ever know. Unless someone manages to find the card and exposes him. I wouldn’t put it past people (Sabrina) to try and find it when he showers.

I’m confused – are the ‘5’ alliance now going to vote out Paul – is that why Sarah said she’ll be exposed? Help would be appreciated. I thought for sure Heather was toast – no?

It’s definitely more of a possibility now I think. kenny, Andrew, and co. are definitely for taking out Paul this week, but the problem is that the girls want heather out. The trepidation here is that because sarah and sabrina are both part of the First 5 AND the Girls Alliance, they’re worried that voting against Paul will expose their true loyalties.

Sounds like there is still hope for Heather. I would be happy actually if Sarah went with the boys and they left Sabrina out of the plan. That would be amazing. I’m still ‘Team Underdogs’ but leaving poor insecure Sabrina out would def create a crack in the F5. ESPECIALLY if Allison is in on it and she isn’t.

Going to have to reconsider my guess on Slice.

And how weird is it during nominations to hear ‘you’re only a pawn’ and I don’t believe your’re going home?’

Clever, and a pretty smart inventor. I checked out the product he was marketing (thanks to you guys posting some links), and he got quite a bit of media coverage for it that was quite positive. He has a Mohawk in some earlier videos. He’s playing this game really smart IMO.

I HATE ADEL ! your days are numbered…

If F5+1 knows they’re going to whack Paul, Ssssabrina can work Neda & Rachelle, saying – well – whatever lies come into her head – using upsy-daisy world logic – like it’s better to be a house united than be a target later for the Boyz & she heard Paul say he & Adel had to target girls & blah blah blah….everybody’s OK with Kenny/Arlie/Jon supporting Heather cuz they swore on jockstraps blah blah blah…

and that way she covers herself & Sarah with the girls amazing Zen No-Alliance Alliance.

Paul really is a loose cannon and maybe a threat to Adel’s game, but it would be better for Adel if Paul stayed at least a week more, IMO, because he is a vote aimed at the Boyz, should the next HoH not go their way.

Heather may well turn on the girls if there’s a 5/5 vote that Ika has to break. A new alliance could pull her in.

QUESTION – is it absolute that Allison CAN vote on eviction night?
Or will Arissa say “Allison, as you got immunity for the week, it wouldn’t be fair if you could vote.” ???
Everyone seems to be assuming she can but is it for sure?

can you please fix the last 2 videos on this page, they dont play, thanks

Youtube says they’re processing … it takes time for them to fully upload.

no worries, i just noticed that the videos of the following page were already up and playable, i didnt know the 2 vids neda/adel and ika/adel were so long, cheers for your help

Yeah for some reason those videos were stalled .. not sure why. Im trying to fix it on top of uploading others .. should be working soon 😉

Dawg your efforts are greatly appreciated, thanks again, you guys are awesome

Paul is so frustrating. I am trying to like him but I can’t like him as a house guest at all. I feel for Ika and especially Adel.

I am trying to understand Adel’s methodology behind taking care of Paul so much.???

I want Heather out for Ika and Adel’s game, but I REALLY get annoyed by Paul.