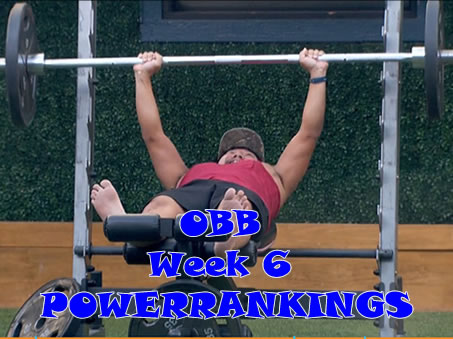 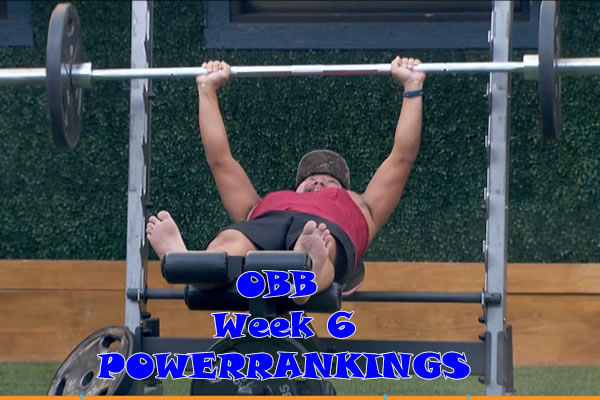 WOW what a big week so much changed… I love this season!

Firstly was the collapse of Clay and Shelli’s game. Together they’ve been leading the power rankings for the last 4 weeks but their skillz finally ran out. Being on the block together with the opposing side holding the Power of veto really didn’t give them many options to work with. The fumbled around a bit but for the most part laid low and worked with Vanessa to help whoever stays in the house. With her close allies leaving and her manic game style unravelling Vanessa’s game is starting to take a hit. With that said Vanessa still holds considerable influence in the house and the group she controls seems to be more adept at playing the game.

Greatest increase this week was James. He’s exhibiting something so rarely seen in Big brother nowadays.. BALLS! He picked his targets put them up won the veto and is taking one of them out. No contrived plan, no trying to prevent getting blood on his hands none of these staged fights. The problem though is his group was not able to secure the votes he might not be sending home the person he prefers. Still getting a target out and breaking up a dangerous couple.

***Please note*** something I want to clear up about players playing a low key game. I really only look at the week’s events and try and see who is targeted the most, who made the most plays, most social connections etc etc. Players that are very under the radar are hard to decode and sometimes may have ranking below where they might be in a couple weeks. As always you are encouraged to supply your rankings below.

TRY the Big Brother 17 Live Feeds FREE for 1 WEEK:
Click here to ensure your live feed subscription supports OnlineBigBrother.com at no extra cost to you.

There’s three main categories, Entertainment value, Social Skillz and Strategy/game with each category ranging from 1-5 with a 0 value being used for exceptional cases. A bonus category is also added worth 3 points for those special cases that don’t fit the 3 main categories.

1/3 – Entertainment
0- You’re not entertaining – I turn the feeds off when you’re on
1- Offensive, Rude, unlikable or flat out boring COULD be SOME words that might describe your behaviour on the feeds
2- Maybe you’re laying too low. Right now everyone on OBB is joking about not knowing your name
3- Neutral
4- You’re a likable person and showing it on the feeds
5- You’re making these feeds Very fun to watch

1/3 – Social game
0 – Your social game is non existent go back to blogging in a basement
1 – Most of the house dislikes you. You’ll see yourself a target soon
2- You’re building some relationships but not enough to keep your ass safe if you or our close few friends don’t win a comp
3- Neutral
4- You’re building a lot of relationships but also some enemies
5- Most if not all the house likes you. Nobody has thrown your name out there as a target yet

1/3 – Strategy
0- Strategy .. HUH? what does that mean
1- You have a short term plan that will get you by the next 20 minutes
2- Your plan is to to make it to Jury to get the stipend
3- Neutral
4-You have a Short term or Long term plan and a couple ideas plans on how to execute it
5- You have a clear plan for the short or long term and a clear plan to execute

Bonus
+/- 1-3 points can be awarded to players that has done something incredibly awesome or stupid. Maybe they turned their game around after being universally hated or squandered away a strategic asset because they couldn’t keep their mouths shuts..

I love it! I strictly read these synopsis and watch the televised show. Great sense of humor! Great job. I will buy on amazon through this site.
What does it mean when you say, you miss the old becky? Like the one that was a ghost?

LOL Thanks Batman much appreciated.

I find Becky’s game talk annoying at times. Sometimes I miss the Becky that just talked about Tinder and her German boyfriend.