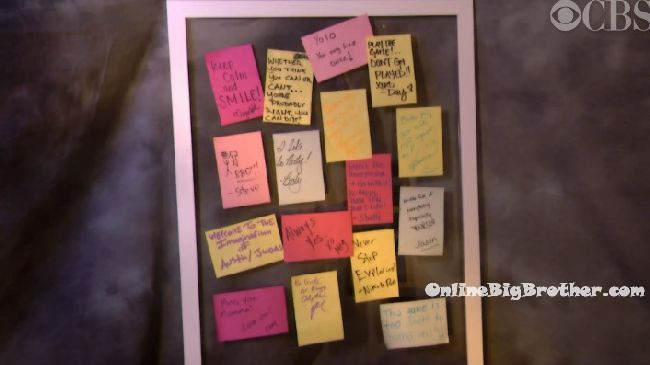 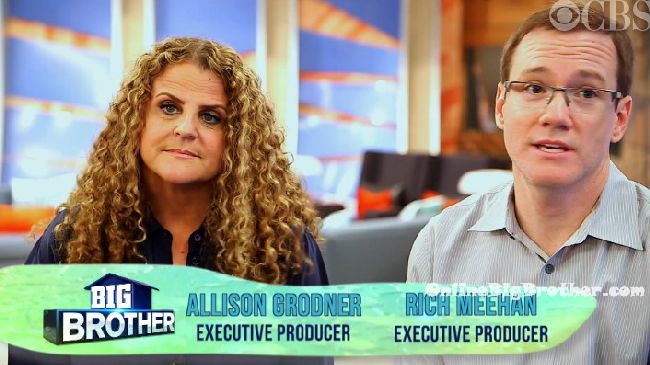 The first of the two-night première airs in just 2 days! CBS has just released a new video including each of the 14 house guests. The video also has Julie Chen and executive producers Allison Grodner & Rich Meehan discussing the “BB Takeover” twist. The new house guests each talk about what they’re going to bring into the game or the strategy they plan on using.

Julie Chen “There are lots of layers to the twist this year that will make it fun to watch.”

Rich Meehan “It can be a casting twist, a game twist, it can be an interactive twist. Its going to be very different.” 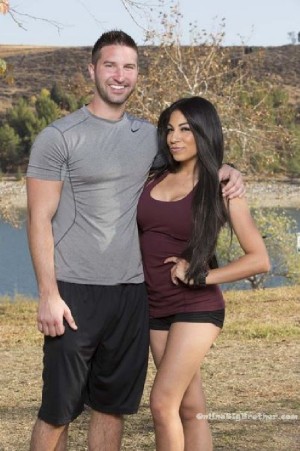 UNCONFIRMED Twitter Rumor:
In addition to the video below there has been speculation from @MissCleoBB that a couple from the newest season of Amazing race might have been cast as the other two house guests which will make 16 cast members. The post-it board has 16 post-its on it indicating the 16 cast members. Their names are Jackie Ibarra & Jeffrey Weldon and were part of the blind date twist of Amazing Race Season 26. In the tweet below the Miss Cleo compared the “Jackie” signature to the one of Jackie Ibarra when she signed the flag from Amazing Race 26.

I heard a rumor that a pair from The Amazing Race will be the mystery HG’s this season, i don’t even watch that show, but just to let you guys know in case you’ve heard it. It’s still not 100% true though if it is though it wouldn’t surprise me, they did it on Survivor recently with Nadiya and Natalie so who knows.

The final 2 House Guests are: Zankie…Zach and Frankie unfortunately

Oh Nevermind, i see that the Amazing Race rumor is already posted on this article. I guess i need glasses, lol.

IF Jeff and Jackie are going to be on this season, why not announce them with everyone else? It’s not like they’re celebrities or returning houseguests, so why keep it a mystery. And if you wanted to bring someone from TAR I’m sure they could at least find another team that’s more iconic or interesting. Very weird casting choice if this is true.

I agree with you they are not celebrity enough to be
the mystery guest. I watch amazing race and I barely
remember them they sure as heck did not win they weren’t
even in the top 3. I think it got to be two former houseguests.

Was thinking the same thing. They were a fairly irrelevant team on TAR, especially Jeff. Doesn’t make sense that they would not be revealed with the rest of the cast.
Are they a secret duo maybe a la season 6? They were forgettable enough on a fairly bland season of TAR that odds are nobody will recognize them.

Hurry Up!!!
So Austin needs to get an all guys alliance together and crush the season. It hasn’t been tried in years and lets face it production never helps a girl win :P Ok they don’t go together but my 2 most recent pee offs. Could we get a creative 4 person alliance of guys and girls that doesn’t have a showmance play BB from day 1.Gotta have a showmance but not the core alliance. No hos versus bros for the love of good. No alliances over 4, this should be a standard rule so we get entertained and not put to sleep.
Hoping for a true float game! Follow the HOH instead of follow the leader and go deep doing it. I need a Talla…. yeh I said it! I want a BB twit with a good heart minus the drinking binges. Reincarnated Britney(season coaches). Lets get some real humour and great DRs. No instant eviction…it’s just so cruel to not let every nom play for veto. No super duper veto ever again. Find a hidden veto ALL have an opportunity at and let it save 1 person once over a 2 week period nothing more. No one re-enters the house from 8 down. 7 on the jury not 8 and no America’s vote! Oh and for the love of God NO team America!
No DAN not once for an entire season. Canada would do well to make that permanent rule. My ultimate wish that production does not pick/push a favourite, Amanda and the Canadian skank Sarah this season being prime examples. Push storylines is fine that part of production 101.

Sadly in Canada(happily Canadian) so no feeds. Looking forward to being here daily this season. Lots of good folks and many US faithful I hope return. I rarely visit any other site any more. The guys are great and the participants here terrific.

For the 1st of what I hope will be many times this season….”BB is a social game”

You need to get a life, hating on a contestant for being themselves and winning the show. Calling her a skank when you know nothing about her, I can’t imagine how sad your life must be if you feel the need to hate on someone to boost your own pathetic ego.

Left over moron! Open relationship = multiple sex partners equals skank to me. So sorry you don’t like my opinion but it is backed up with facts. Oh someone who does wash their hair or daily bathing likely a skank to! Win or not she’s a SKANK accept the truth… then again her fans spent a season trolling the site and never recognized the truth as they were so bust lying and making excuses. By the way any of you Sarah fans asked how Willow is doing? Trash is Trash and that’s your Sarah :P

I actually like Jeff and Jackie, specially Jackie, she’s got some real spunk and attitude which could be really entertaining to watch. Jeff is a so-so character mostly because he is outshone by Jackie’s personality. Either way both of them are really competitive and are a physical threat, they could be this year’s Brenchel. I’m just glad that the ‘rumours’ for the missing houseguests are not returning players who had experience how it is playing big brother. I’m really fond of crossovers specially these reality competitions are way different from each other.

Those are “The Amazing Race” Bios

No it’s not. On the part that asks “What s your biggest achievements…?” Jackie said “Other than being on The Amazing race blah blah blah…”

Those bios are posted on CBS’ Big Brother page.

So excited for this season! Thanks to you Simon and Dawg for this wonderful page!

Excited to be back here for another season! Can’t wait!

So ready for the new season and simon and dawg. Just hope they keep Frankie out of it this year.

Ugh…the cross-pollination of shows has struck! The only reason to have “a summer of more twists” is to rig the show. Better they should each houseguest should be given an envelope at the beginning of the season and at some point, that HG will be asked to open it, revealing that week’s twist.

Pretty excited for a new season and this site. Thang god theres probably no returning houseguests. No frankie! Sadly i think hell be back eventually ya know bc hes such and important social media mogul

I can’t wait for tonight! I’ve never seen TAR, so if these two end up on the show it’ll be like all new HG for me.

I just really hope nobody gets Jodi’d. That’s such a waste of the casting process, and takes away from the game. It’s entertaining sometimes when intended targets end up winning Veto (still can’t believe Bruno saved Zach lol).

ITS HERE ITS BIG BROTHER 17 TIME
LETS HOPE ITS A GOOD YEAR
Some laughs ,some fights ,some clever competitions
maybe a showmance no Hugh alliances like last year
hope for lots of backstabbing . And please of please let’s hope
no Frankie Grande

I wonder why BB hasn’t cast any former Survivor players yet? It has a big pool of former cast members with the game having some format similarities with BB.

I am hoping the twist is that they are bringing back two former players rotated each week for the first four weeks and there will be a side competition to see who of the returning players gets to stay and compete in the house…at least I think that would make it interesting. Either way I am super stoked about the return of BB!!! :)

Simon,
I can’t find where I asked you this a few days ago…so I’m gonna ask again k?
Is there any word on Canadians being able to get the live feeds yet without all the bullshit of having to get American address and credit card shit?
***also is this true ? ? ?——- 14 hg.s right now but the final 2 to make 16……is going to be Zach and Frankie? Zankie???….that’s not happening eh?

Hey MrJwall, There’s no easy way for Canadians to get the feeds. It is possible but you have some hoops to go through and the cost is increased.

If Frankie is on this season it will probably result in mass exodus of the fan base.. OR the opposite could happen like it did with Rachel he could come back and be loved by the fans.. LOL

That John dude with the funny voice cracks me up. :)

Jason, the grocery stacker, is kind of a Pee-wee Herman, no?

Simon…I think I figured it out…Dawg is your dog..lol…all along I thought that was your buddie’s nickname who helps you with this site! Or is it ? Either way feeds or not in Canada …will be using your site daily…so it’s time to up some ca$h to ya’ll.
I would rather it be a 2 hr show tonite…then it divided to 2 days! (guys tonite…girls tomorrow probably)

Ah cool…don’t think alot of people realize…Well this is a shit load of work you do for us! Glad you at least got the feeds…I’m not gonna bother going through all that. It would probably be easier cuz I’m at border town…
Sault Ste. Marie….just gonna be here more 4sure!

I was teasing about Dawg not being real.. LOL Dawgs a old friend. Typically he does 1-2am to 3pm and I cover 3pm to 1-2am. We both have job commitments outside the house so keeping this site running for the entire season is a marathon.

Ah well…it’s still a shit load of work for 2 guys lol…prob for 4 or 5 guys too….it’s appreciated!…

the Amazing Race duo doesn’t really interest me, but just not being Frankie makes them totally acceptable.

that said, a big part of me wanted to see Zach on the ATTACK! again this year. however we may not need him with this cast, last year? Zach was a freaking necessary part of what was IMO a really bad season/cast. I think having Zach “coach” someone on how to play BB might be one of the biggest disasters(in an awesome way) in a long time.

Simon or Dawg, my son in law doesn’t have cable or an air antenna, he’s in the States – do you have a link for where he can stream online?