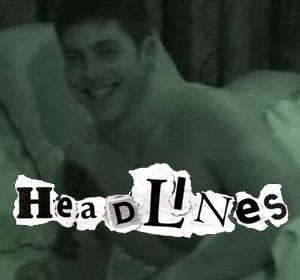 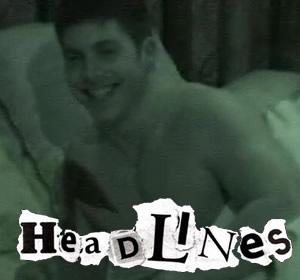 June 1st Robyn Kass Tweeted
No BB decisions have been made, but all semi finalists have been notified. Thanks to all who applied!
Good luck to all the fans for filling out their Big Brother Applications and/or heading to the Open Casting Calls.

Another week closer to Big Brother 2011, BB8 Evel Dick recently tweeted that This is the weekish that the Big Brother 13 finalists are sequestered. They are looking up everything BB on their computers So if your a BIG BROTHER 13 finalist and your reading this blog trying to figure out the inside workings of the Big Brother house for the past 3 season i’l give you a couple hints right now…

BIG BROTHER 9 Matty McDonald Blogs From Prison
One of our readers (bbfan4172 <- thanks Mate!) has dug up Matty Mcdonalds Big Brother 9 blog being written straight from prison. It’s going to be a interesting read heres a small excerpt from it

I was indicted by a Federal Grand Jury on April 27, 2010 and arrested by the DEA that very same day for conspiracy to possess with the intent to distribute a whole boat load of oxycodone pills. That day wasn’t fun…let me tell you…but I’ll talk more about that down the line. I had no absolutely no criminal record prior to that, but was denied bail/bond by the Feds due to the fact I was accused of a domestic assault a few days prior to my indictment and because I was supposedly a flight risk? I really can’t talk about the domestic charges because the case is still pending, but I want to firmly maintain my innocence. Listen, I may have been a drug dealer at one point in my life, but I DO NOT hit women. I love women. I may have been an jerk when it came to matters of the heart, but I don’t hit–it’s just not who I am.

Anyway, as far as the drug charges are concerned, I pled guilty in January of 2011, and I was recently sentenced by Chief US Judge Mark Wolf in Federal Court on May 11, 2011. He imposed a sentence of 36 months in Federal prison, to be followed by 5 years of supervised release, with mandatory drug testing and a hefty $50,000 fine. The judge was quoted saying, “Mr. Mcdonald, you’ll probably end up back on TV after this is all said and done, so you’ll be able to pay this fine off in one lump sum.” Umm…does anyone have 50K I can borrow? lol
Theres no mention about Adam Jasinskis his alleged partner. However Matt does talk about “RATS” I wonder if that was Big Balla. …

BB news from around the internets

This is a pretty cool interactive game based on Big Brother. It’s def not as awesome as it would be to be on the show, but I know I could never be away from my kids so this gives me the experience of interacting with strangers and trying to avoid eviction. You should try it out!

They sequester then for 3 weeks plus the week they go into the house before it airs? That seems long especially since details won’t leak for another 2 weeks or so.

yes I agree, not sure what DICK has been smoking.. lol.. Robyn just tweeted this morning that the semifinalists have been picked.

I can’t wait! 😀 I LOVE this site and thank you SImon and Dawg for doing it again this year

Glad to have you back Jordan 🙂

Finalists will probably be picked in 2 weeks and flown to LA. Around June 23rd, they should go to sequester. One week for that and then around 1 week in the house. Once they are in sequester details will leak. I hope they make this season more unpredictable. The HG’s know what is coming.

Can’t wait for the new season to start and see what the theme will be and the houseguests. It’ll be great commenting with old friends again and thanks simon and dawg for doing this site, woo hoo!!!!!

Just a few more weeks! I look forward to another OBB summer with Dawg and Simon. And please, no showmances! I think season 10 was the only one with no showmances and it was a great season. I hope this year they change it up. Last year the competitions were so predictable and the HG were so boring. I also don’t want to see Jesse ever again. We hated him in season 10, we hated him in season 11 and his cameo last year was pointless and painful to watch. Hopefully this year we get houseguests that play the game, not half the house floating and taking out the players early. I might have missed it, but are Enzo, Lane and Hayden famous yet? When is Da Bragade miniseries coming on? Or did their 15 minutes of fame end last September? Counting down the days!

Hey Chloe, The brogade has no fame if anything Hayden is famous for having the worse tweets of the BB12 alumni. I can’t believe in less than a month we’ll be doing this all again.. it’s going to be a blast.

There was a showmance in BB10, April and Ollie… aren’t they still together?

Of course! April and Ollie. I think I was so sickened that I erased those disturbing images from my memory. Now that you’ve reminded me I won’t sleep tonight. Haha