9:15am – 10am Brendon, Rachel and Shelly are out in the backyard talking about random things. Rachel tells Shelly all about her problems of finding jobs. The conversation switches to talking about health care and how expensive it is. Adam weighs himself on the scale. He leans forward and he weighs 215 pounds and if he leans back it reads 200lbs. Adam is now up and out in the backyard talking to Brendon and Shelly as Rachel works out on the elliptical. 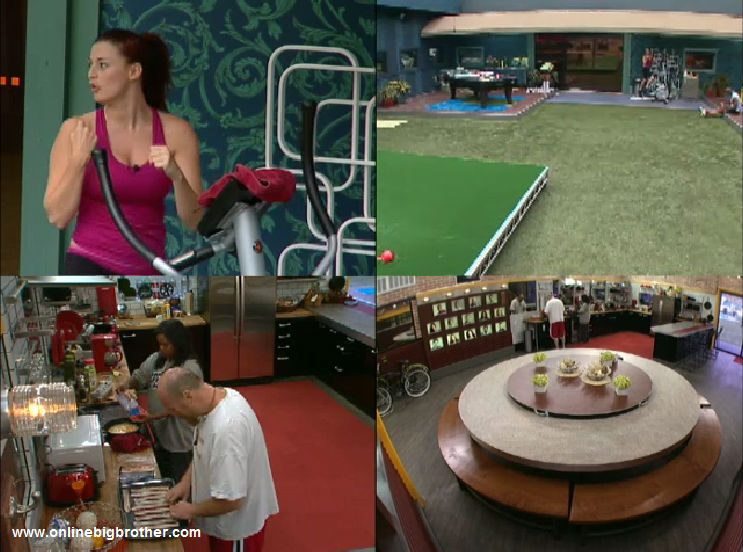 10am – 11am Big Brother tells the Good Morning.. it’s time to get up for the day. Jeff and Jordan are still sleeping in their beds, Lawon and Cassi are sleeping in the havenot room. All the houseguests are awake making breakfast and getting ready for the day. Rachel asks Adam talk about 90210 then Adam heads inside to make breakfast. Dani and Keith are working out, Porsche plays the golf game with Brendon, Adam and Kelia are now in the kitchen making breakfast, while Shelly is cleans. Shelly says that she may have their next invention .. turning the broom into a swiffer using baby wipes and a hair tie. She tries it and says that it works awesome! 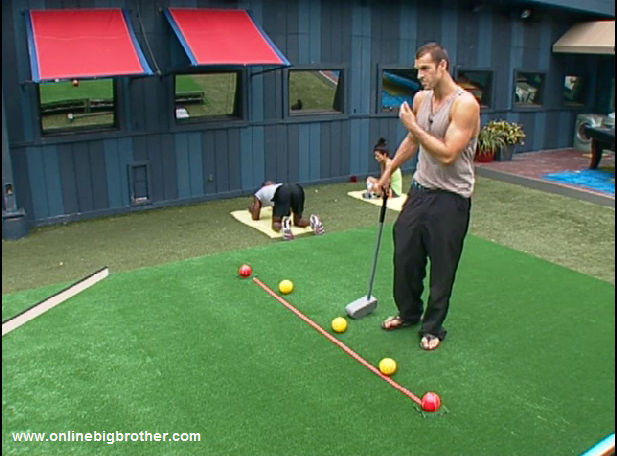 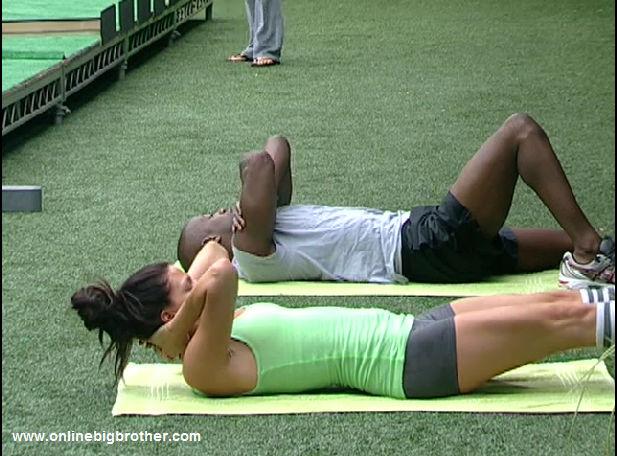 11:25am Really slow morning in the Big Brother house… no game talk just random conversations, eating, working out, playing the mini golf game, getting ready for the day and sleeping…

You know it;s not too late to do a re-cast, we will forgive BB production.

I hear you! Where do they come up with these yahoos? It’s like watching paint dry.

I know!!!! imagine what the other people must of been like for them to be cut

Yeah, Dani’s legs are looking very sexy. I particularly like that she’s been rocking the high socks.

The next HOH is crucial. Anyone else notice how convenient it is that the upcoming challenge looks like a repeat of the golf challenge in Season 11 where Jeff threw the win to Jordan? If JJ win I think Cassie and Shelly go up, and probably Shelly stays with the golden key. I would be surprised if Brendon wins. He is ok in strength comps, but not the most coordinated guy, so he will probably suck. If Cassie or Dom win, then JJ will go up, but the danger is that if Brendon wins POV he can take them down, be safe and newbs are forced to put up one of their own pairs, and they could only choose between Lawan/Kalia and Cassie/Shelly if Dom is HOH or Dom/Adam if Cassie is HOH. If a newb wins HOH, they would be smarter to put up Brenchel, because Jeff and Jordan are unlikely to win the veto, and if Brendon wins and takes him and Rachel off the block, JJ are vulnerable and one of them goes home. Putting JJ up could be the fatal mistake. So once next weeks eviction happens, there will be 3 golden keys, and one to go. Three people will be gone, and three will be unable to compete for that HOH, plus outgoing HOH. So that competition will only be played by 4 people ( I think this is right).

Actually 6 or 7 would play, mostly the weaker players.

I was wondering how putting up JJ could backfire, hope they are smart enough to catch onto that, but I doubt it.

in canada, healthcare is “free”!

Canada does NOT have free healthcare. It is a common misconception amongst raccoons

Yeah its all free if you pay your monthly premiums. In my province its $60/month.

In BC. That’s per person, and there are lots of things it doesn’t cover, but I am lucky that my job has extra coverage and prescription coverage and a good disability package now that I need it. Back when I was young it was free.

I’m in BC to, I think your MSP premiums are based on your income. A few jobs cover it, I think 2 in my last 5 had MSP paid for.

$60/month is free? That doesn’t sound free to me. Not to mention taxes.

Tell THAT to my taxes.

You don’t really notice the money being taken…