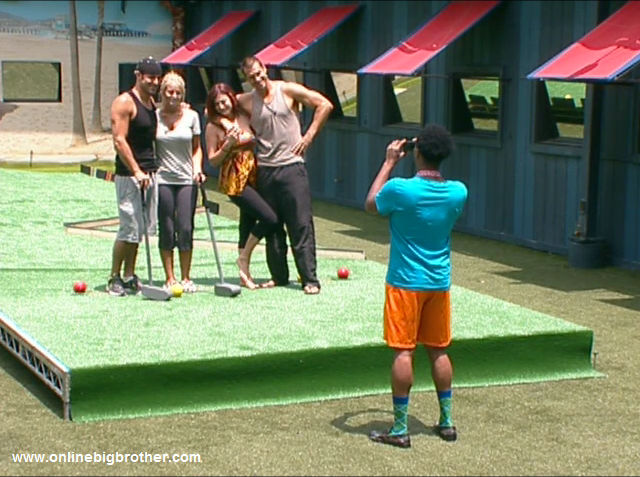 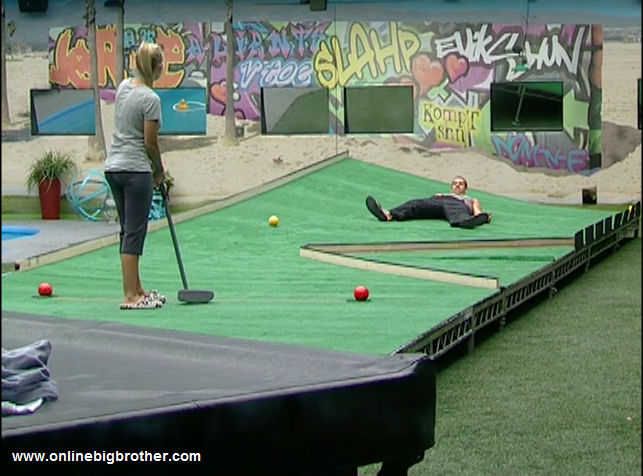 11:30am – 12pmJordan is practicing the mini golf game and Brendon lies down on it to imitate an obstacle that she has to shoot around. Keith is working out on the elliptical, Kalia is walking around the backyard exercising. Kalia, Brendon and Shelly are talking about tattoos. Shelly says that she got one and was embarrassed to tell her parents. Brendon says that he wants one but doesn’t know what. Shelly tells him not to get a big brother one like Dick. They start talking about Dick. The conversation changes to talking about QVC. Shelly loves it and buys lots of things off them. Rachel pops her head out into the backyard and tells them they have 30minutes and then goes back inside. Shelly asks Brendon 30minutes for what? Brendon guesses till she takes HOH pictures. Shelly goes inside to ask. Big Brother cuts the live feeds. When the feeds come back Shelly, Adam and Brendon are talking about how he proposed to Rachel. 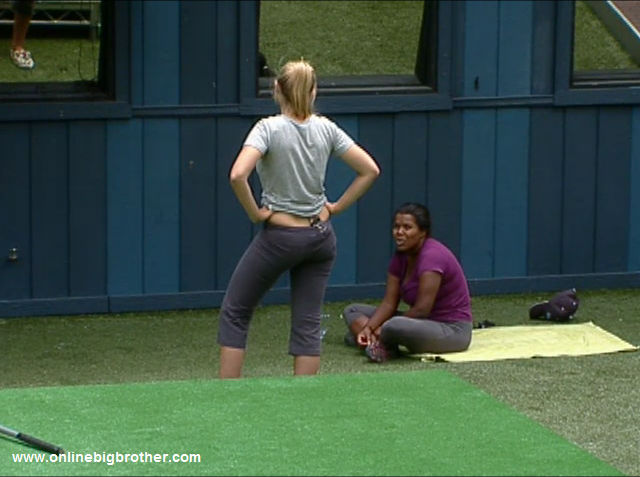 12pm – 12:30pm Kalia and Jordan are in the backyard talking. Kalia says that Porsche has know idea who she is …and to have a name like that you need to someone. She says that Porsche takes on the personality of who ever she is with. The conversation changes to talking about the HOH competition. Jordan says that she hopes Cassi wears high heals for the live show so thats all she will have for the competition. Jordan says that she needs to win this one! Meanwhile, in the bathroom Cassi and Rachel are getting ready for pictures. Cassi asks Rachel who she wants voted out. Rachel says that she doesn’t know. Rachel then turns on the hair-dryer and leans in and asks Cassi who she is leaning towards. Cassi says Keith. Shelly comes in to the bathroom and the conversation stops. Out in the backyard Brendon and Lawon are talking about the school system while Jeff eats and listens. 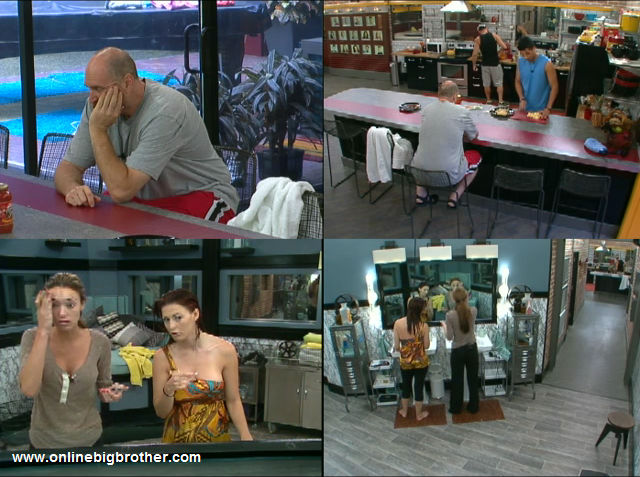 12:30pm HOH photo time! Rachel gets the HOH camera and is snapping photos with other houseguests. Half of the houseguests aren’t ready and dont care. They take one of Rachel on Brendons back, Dani biting Lawons tie, Keiths abs, one of Rachel and Brendon down by Dicks photo posing like they are asking where he went, one of Jeff and Jordan, …then Rachel wants one of Brendon, Rachel, Jeff and Jordan.

Rachel is being super annoying. Jeff tells Brendon have fun with that for the rest of your life. Have fun with that! Brendon say yeah. Lawon takes a few photos of them and Rachel talks about more photos she wants and starts to head inside. Rachel then whispers to Jeff that in 20minutes they are going to be on an indoor lock down. Jeff asks really when am I supposed to work out? Jeff then decides to jump on the elliptical. Inside Rachel is still snapping pics of the other houseguests. 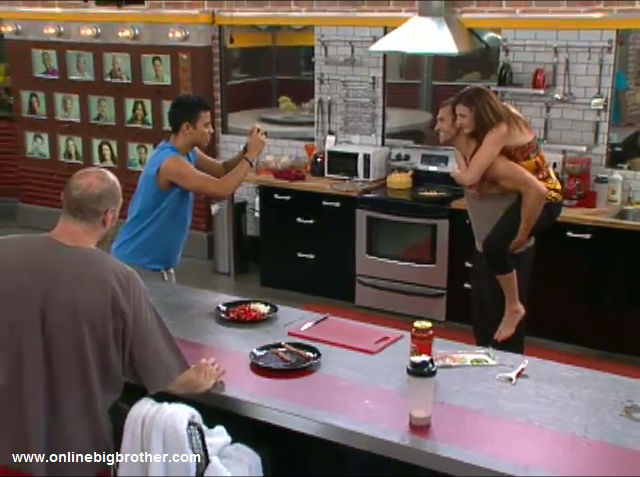 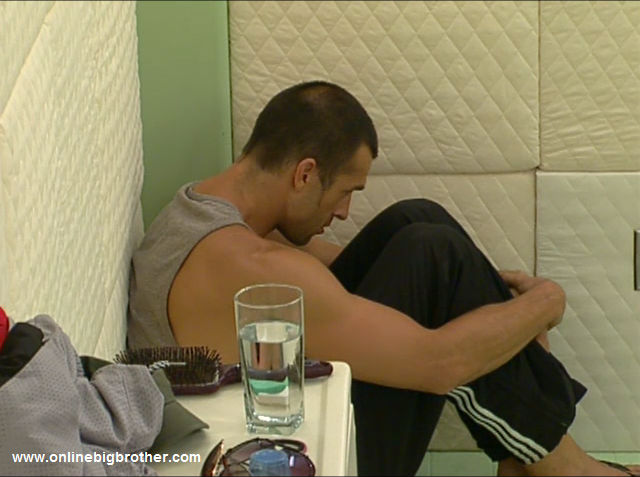 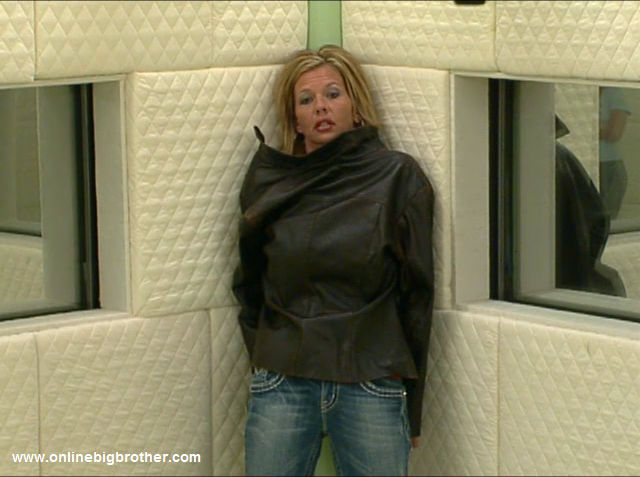 12:40pm Rachel is in the havenot room with Dani, Porsche, Lawon, Brendon and Shelly taking photos. Rachel starts taking a lot of photos of herself and Brendon tells her to lay off the pics of herself. Big Brother calls for an indoor lock down. Brendon and Rachel climb behind the cage around the stairs while Dani takes a photo of them. Adam tells them to roar like lions. Rachel, Brendon, Dani and Shelly are still taking photos . Adam, Kalia, Jeff and Jordan are up by the chess board. Adam and Jeff are playing. In the bathroom, Kalia tells Dominic that Porsche told her she’s going home and that the vets are coming after her (Kalia) next. Kalia says that Porsche isn’t intelligent at all. Jordan comes into the bathroom and Dominic leaves. Brendon then joins them. Rachel is right behind and says that she is going to write the HOH blog. Brendon tells her no more HEZZIES …that he isn’t going to marry someone that does that.. Then he tells her to make sure she spell checks. Rachel says that there is no spell check. Kalia says maybe Brendon should go up with her. Brendon says he can’t and wouldn’t want to anyways. 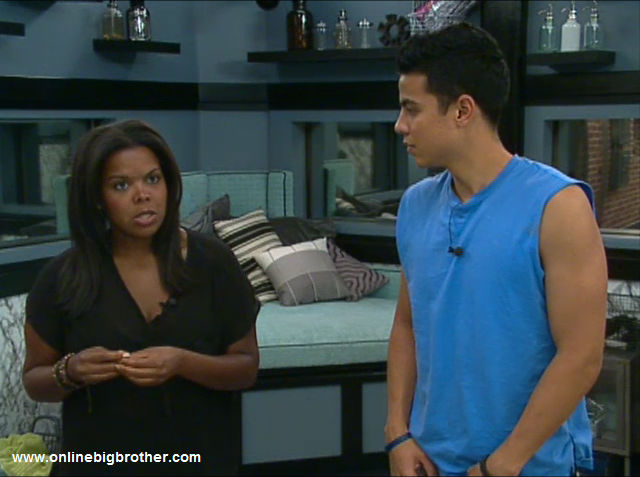 1:25pm – 1:45pm Brendon and Lawon are in the lounge room talking about what the mini golf competition will be like. Lawon leaves and Jeff comes in and tells Brendon about his chess game with Adam. Jeff said that Adam was asking where they were at… and Jeff said that they didnt know. Jeff asked him and he said he didn’t know either. Jeff then asked if Adam was still with them and Adam wavered … So Jeff says okay so your not with us ..thats fine. Jeff says that Adam was like uhh uhhh .. Jeff says he told him thats fine we already have the numbers .. we know everything your side says.. we already have people from your side we dont need you .. They laugh. Jeff tells Brendon that they will just keep BLANK with Adam now …keep making him think their side has a mole. Jeff says that we will make him think it could be his partner ..he wont know who to trust. Jeff says that he told Adam not to worry about it …they will put him up next week. They start counting the votes ..Dani, Jeff, Jordan, Kalia, Porsche, Shelly… They talk about how Adam will be going for HOH now. Brendon says that Adam is easily rattled. Jeff says we could easily get him back if we need him. Jeff says that the newbies don’t know whats going on .. they think we’re all going to be here all summer. Brendon tells Jeff his conversation he had with Shelly this morning about how she is the only person they trust and that they have her back. Jeff says that they need to talk to all of them .. otherwise if they stuck together ..they could just pick us off one by one. Jeff and Brendon come out of the lounge and try and pretend they weren’t just talking game. Jeff says OOHHHHhhhh…so E=MC squared…. 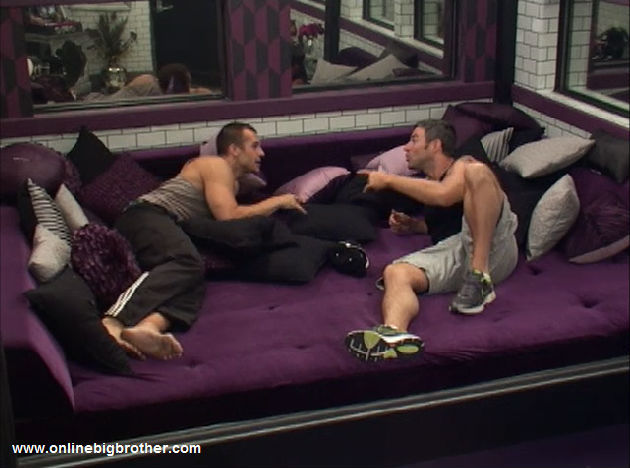 1:50pm Porsche and Jordan are in the bathroom. Porsche asks will you at least tell me if you guys are thinking of keeping Keith instead of me. Jordan says yeah of course she would but she hasn’t heard that. Porsche says that Keith has been walking around all confident that all …

See, this is exactly why I think Jeff is not only a tool, but not very bright. Jeffie boy, you are not in power. All power held by the vets was over at the POV ceremony. Right now, it really doesn’t matter who goes home, what matters is that Jeff or Jordan need to win or one of them will probably go home. Do the math, Jeff! The last thing you want to do is piss off Adam. What a moron! Now you better hope you win and can put Adam and Dom up, or you are toast.

I really dont like Jeff this season. He and Jordan were my fav’s but now Jeff has left this bad taste in my mouth BTW he hasn’t been very nice to Jordan ether this year it seems her heart is not in he game.
I hope they vote out Porsche she rubs me the wrong way!!
And I cant wait until Brendan and Rachael are on the block and one of them are voted out

Brendon and Rachel getting married will the biggest mistake of their lives. Brendon is so controlling. He wants Rachel to change and be less whorish. Even though I find her to be annoying and fake, she doesnt deserve the way he treats her. Hes so disrespectful!!!

“Jeff says that the newbies don’t know whats going on .. they think we’re all going to be here all summer.” What does that mean? Have I missed something?

Jeff is saying that Newbies haven’t grasped the fact that ever week a houseguest leaves, he’s probably implying that they are not thinking long term enough.

Piraña needs to go. However; keith has been a knucklehead. If they lethe “oldheads” runover them, then they deserveit. I love ED but, he is gone people. The “newbies” are being steamrolled because they let it happen. Get Jeff and Brendon out and see how the team does. I want Dani or Shelly to win if the choice were today. Kalia needs to wake up. College grad she is, she is a puppet for sure. I was looking forward to a great season and I am sticking with it no matter what. Listen to Keith because he is right. The newbies had better wakeup soon.

The newbs will probably wake up after they lose their number advantage.