11am – 11:15am Rachel, Adam, Shelly and Keith are in the backyard. Keith is working out on the elliptical while Adam and Rachel talk about how it’s difficult being in the house and how you need to start new routines. Adam starts talking about how much he loves 90210. Shelly and Brendon talk about her husband. Brendon and Rachel talk to Shelly about having children at a later stage in life. Brendon tells Rachel to soak it all in … They talk about how expensive it is and how once you have a child you need to make time for each other. Rachel gets called to the diary room, and soon after Shelly gets called in.

Watch the first few days of for FREE!
3 Day TRIAL!

11:20am Dani, Shelly, Lawon, and Porsche are in the bathroom joking around. Lawon and Dani are laughing and talking about last night. Yelling and dancing Big Booty, Big booty!! Most everyone is in the bathroom getting ready for the day. Porsche then heads into the candy room and gets ready while talking to Jeff and Jordan. 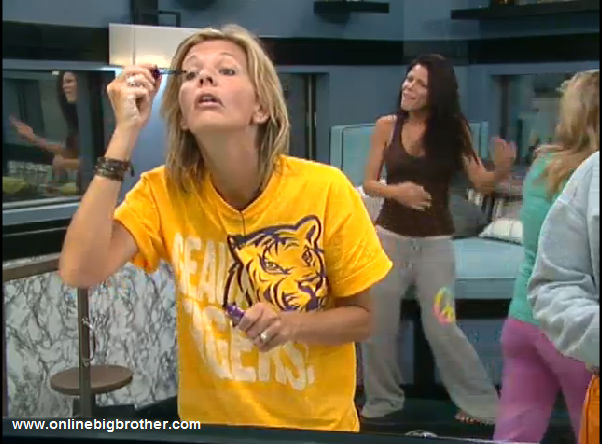 In the Storage room Adam and Keith are talking. Keith is telling Adam about his conversation with Brendon this morning. Keith tells him about how Brendon told him to confront Lawon today. Adam tells Keith that he can’t stand Kalia. Adam tells Keith that Brendon came up to him this morning too and told him he wants to talk. Keith gets Adam to back up his story so that they will trust him and Porsche and not Lawon. Adam and Keith do an exploding hand shake and agree on the plan. 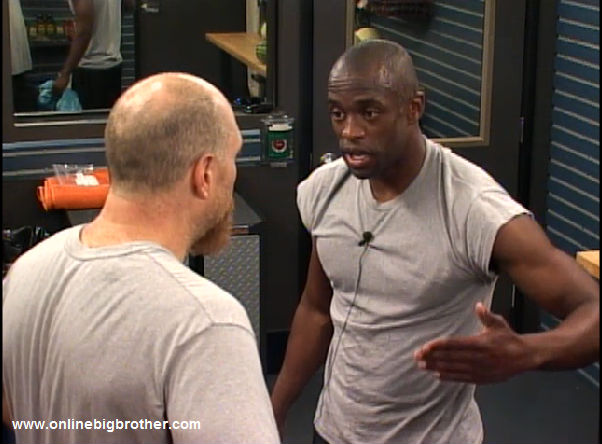 11:35am – 11:50am Brendon, Rachel, Dani and Jordan are all up in the HOH room. Rachel confronts Jordan and asks her if she threw the POV competition yesterday. Rachel says that Porsche says that Jordan had told her she threw the competition. Jordan gets defensive and says No I didn’t. They believe her and say that they didn’t believe Porsche. Jordan talks about how she was really trying in the competition. Brendon then tells them that he wants to bring them up to speed on his conversation with Keith this morning. Rachel interrupts Brendon and Brendon snaps at her saying sweetie! Brendon tells them everything Keith said and how Brendon had told Keith that he needs to confront Lawon about stirring the pot and making him look bad. Brendon tells them that Keith says that Lawon is trying to play both sides. He says that Keith wants Brendon and Rachel to put Lawon and Kalia on the block. Rachel says that maybe we should just call a house meeting! Right then a voice comes over the house and tells the that they need everyone to go out into the backyard ASAP! Big Brother then cuts the feeds to the we’ll be right back screen… 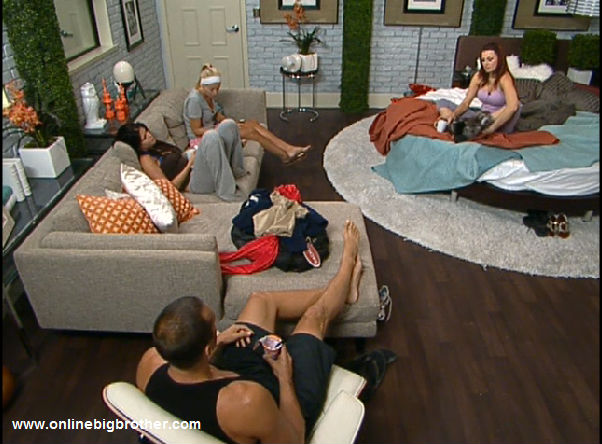 If you’re on a mobile device don’t forget that the live feeds are accessible this year on your Android and iOS devices. Sign-up for the 3 Day Free Trial

Hey guys I like this pic of the houseguests better than the one you have up… with Rachel and Brendon’s new pics. Check it out

Hey Jordan, did you make that image up? it great

It is great! Jeff is yummy :) And I like that the names are there too because I haven’t gotten them all down yet so this helps when I am reading comments about each one.

Can I call a house meeting too? You bitches SUCK none of you are entertaining us. DRAMA OR DIE……..

We get Showtime free as part of a package of services. I tried watching BBAD these past two nights, only to end up curing the insomnia I’ve had for the past 3 weeks! THANKS BB13! I am so lost regarding this season that there aren’t even enough bread crumbs around Alison Grodner’s “trough”, I mean under her kitchen table, to help me get back on track! I know the first week or so things are slow in terms of game, but I have a feeling this train’s derailed and it hasn’t even left the station yet! “Funbags” and “Needledick” have totally ruined this season for me. At least ED, whom I didn’t care for very much, would have had the house upside down by now! However, being a “good” addict, a “beat hit” is STILL better than no “hit” at all! I feel bad for Simon and Dawg who have to do a “Clockwork Orange” watching this tripe! I guess you tweo are really going to earn your “oats” this season! God Love Ya!