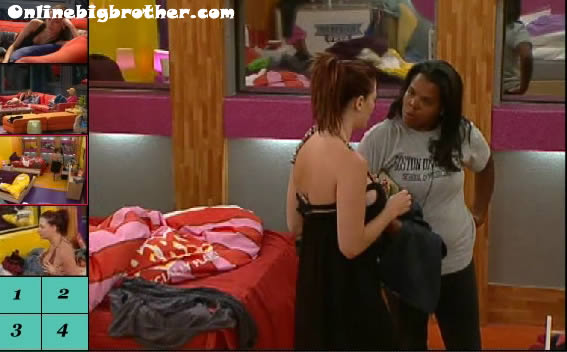 8:37pm Kalia and Rachel Kalia says she’s assuming if she throws the HOH and her and Lawon go up then Lawon goes hom. Rachel says yes. Kalia: “yeah as long as I don’t go home. ” Rachel says if it’s majority rules we’re going to go A every single time until we get out Lawon, Adam and Dominic.
Kalia says that the newbs have been getting their asses kicked So she thinks it’s going to be a quiz 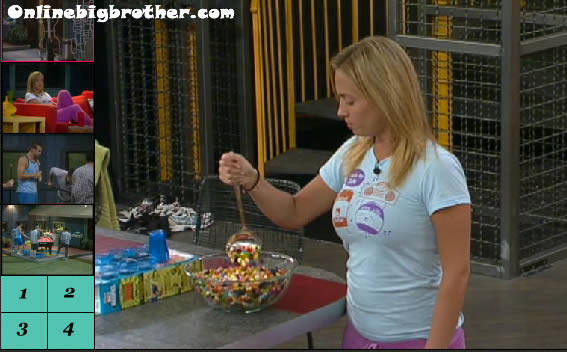 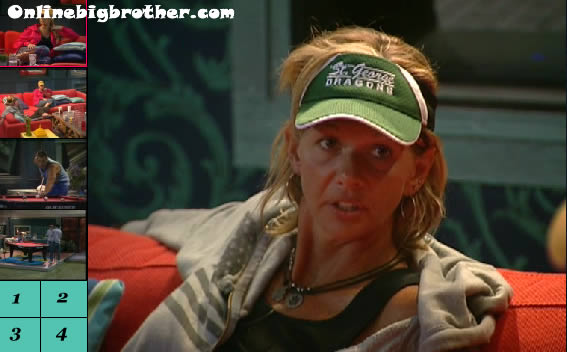 9:10pm Shelly and Jordan Shelly is telling her that Dom is not going to be putting JJ up she’s pretty sure Adam will put up Lawon and Kalia then backdoor Rachel if the options is there. She reassures Jordan that she will make damn sure that Adam doesn’t put up JJ up. Jordan is worried that Dani is going to side with Brendon and Rachel. Shelly I think Dom is trying to pair up with her so when they hit to singles those 2 will make a play. Jordan agrees. Both of them are very worried that dani is going to go far and is one of their bigger threats (Hmm Jordan knows what is going on) Shelly doesn’t think adam will win many comps but is sure Dom will win a few. 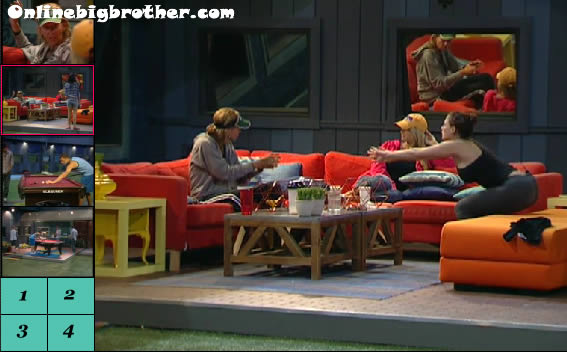 9:25pm Couch Shelly and Jordan They are talking about relationships and Rachel is beside them doing squats. Dani asks why she’s working out there it’s awkward Rachel says she wants to be part of the conversation. (Jordan and Shelly isn’t engaging her in their conversation.. LOL there not even looking at her ) Shelly saying that they don’t walk around their house naked their strict about that. Shelly talks in length about her kid and husband. Jeff joins them and Brendon jumps on the elliptical. Brendon mentions that in rachel’s old apartment she was kinda dirty but after moving in with him she cleaned up a lot. Rachel says she changed for Brendon but they have a tiny apartment so it’s easy to clean.

Lawon, Cassi and Porsche joins them
9:36pm Jordan: “My friend Megan looked in her dogs poop there was all these little worms” POrsche: “My little Chihuahua had worms so I called him Tequila” 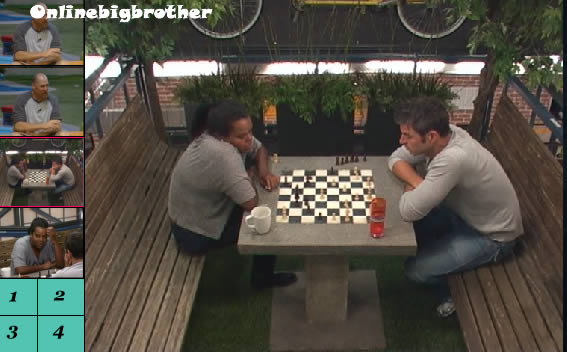 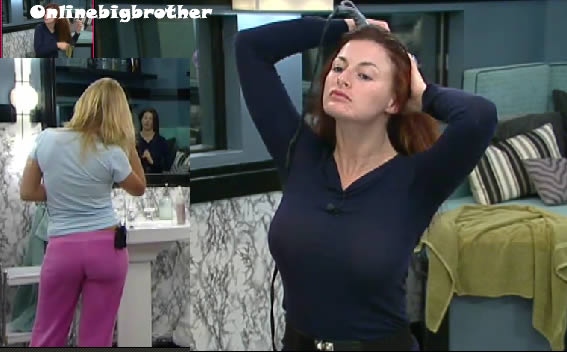 10:18pm Porsche and Rachel POrsche has been filling her time counting things around the house. 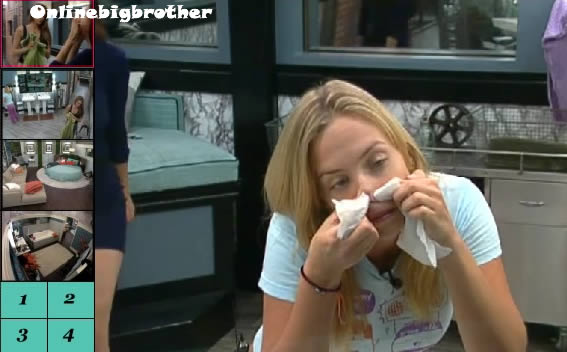 10:20pm Thursday night black head squeezing
10:36pm Rachel and Porsche are talking about getting rid of Dom. Rachel says that both Dom and SHelly are sad Cassi is leaving so there’s still something going on between them. Por points out that if they keep Dom then there’s 3 strong guys in the house. Rachel has been thinking about that to. 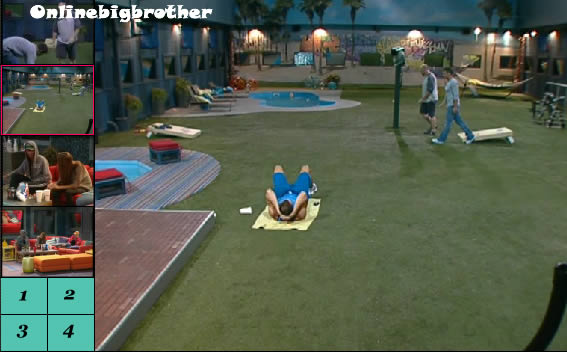 11:06pm Backyard adam jeff playing the bag toss Brendon doing a ab work out.. Not much going on.

Free all you can eat buffet. Im all in =P

ohh damn those are awesome

had no ideas for Lawon and Cassi

I won’t disrespect Oprah like that, Audrey ll from Little Shop of Horrors is much better for Kalia…. and I will add the what what in thew butt dude, still up in the air on Cassi but she gone tomorrow so no point in worrying

Cassi can be TInkerbell.

And Shelly can be Kathy from last year! HAHAHA!

My bad, you already did Kathy! HAHAHA!

I thought I was the only one wit what what in the butt love it.

Cassi = twig with coconuts (possibly stick her head on there)
Lawon = Wanye Brady (that fivehead!)

I saved the .psd so I can always ass or change anything

hahaha i burst out laughing, its perfection!!

I thought Rachael was a have not. Watching BBAD girl has not stopped eating. Would not have noticed but damn the sound of her chomping. What is she eating rocks?

Pinto has gained some weight but she still has a cute figure. I have always felt she is a butter face.
The close up eating and zit popping are disgusting.!!!

Simon you should use “The Ladies Man” for Lawon. Have you seen that movie? And oh my gosh Porsche isn’t even using a spoon! She has a big ass ladle all up in them jelly beans!

LOL Kalia is considering throwing the HOH comp – as if she even has a shot and i’m sure she knows that she doesn’t.

I don’t think I would ever throw an HOH competition unless it was to actually make a well planned out REAL strategic move. I wouldn’t throw any competition for that matter. As much as I find Rachel annoying – I do respect her as a competitor and cannot see someone like her throwing a competition.
Kalia is a real waste of a spot in that house. I hope the very same vets that she sucks up to so much throw her under the bus soon, so that disloyal bitch gets what she deserves..

And oh my gosh Porsche isn’t even using a spoon! She has a big ass ladle all up in them jelly beans!

You’d think production would say something to Porsche about the pink sweats. Or maybe that’s all she fits in anymore?

Simon, I can’t get to anyone’s comments. I have tried to find QAZ and HaydenFan’s recent comments but if I click them, it takes me to a section and their comments aren’t there. It was working earlier but not now.

Does anyone what ever happened to eric stien?

Lennon’s Ghost, I can’t find your comment on here but I see you sent me one in Recent Comments. I click it and I go to nowhere land. I am not even getting the email notices anymore. Can you find this comment of mine? I am having a heck of a time with the new site. I don’t know if I need to change something or what with my computer. .

*If an Ewok & Janet Jackson’s face got bloated, you get Kalia. FINALLY Dewon wore a hat over that terrible excuse of front yard bush on his head or an old fashion va jay jay.

*Cassi’s accent is so thick I think people can stop making fun of Jordan or Britney Spears’s accent. Cassi belongs on CMT. Cassi really always looks so bored & sad about life. I don’t get that. there was hug arse audition for Big Brother like always so you picked girl! Why U mad?

*I think Shelley got taken form a The Jerry Springer Show to be on Big Brother.

*Dani is pretty and all but I swear she should have been on The Hills.

*Is it me or is it that Jordan, Rachel, Cassi, Porsche are pressured by the producers to look super hot all the time. Lesbian & Male Audience just went up. Literally for the male audience.

*Doesn’t Dom sometimes look like a cast member from The L-Word?

*Brendon eats alot not because he’s fit, but because he’s a STONER!! you know him & Rachel hit that green everyday when not on Big Brother. On second thought doesn’t everybody?

I see what you’re saying with the pressure from production. Dani was also talking about how production would tell her to go back and beautify herself before filming her DR sessions.

I agree, I think they are trying to get the girls to look sexy. The way cameras roll, sometimes move from feet to head in slow motion, is definitely trying to bring a sexy element to this. Don’t have much problem with that, I guess.

Thank you!!! My husband said this the other day. An older version though.

SHelly don’t look that bad, I mean seriously they made charlize look like the ugliest women ever

I think it is so wrong tghat they try to get people to throw HOH, now POV is understandable for the most part, but HOH is their chance to get a letter and pics from home in case they are feeling homesick and you should not deprived them of that. but Kalia is that dumb, funny nobody else is throwing it LOL cmon newbs win and shake this shit up, one of the vets gotta go to make this season interesting.

how stupid is porsche. my dog had worms so i named it tequila. hows about taking it to the vet, or getting some meds to make it better. dumb bitch doesn’t deserve to own a dog