11:10am Dani goes up to the HOH room to get ready. They talk about this twist with the golden keys and how maybe everyone ends up in the jury house. Rachel tells Dani that Keith told them that he would put up Dominic and Adam. They talk about how long this week is because they have nothing now to do until Thursday since POV is being held today. Rachel then starts reading bible verses to Dani. 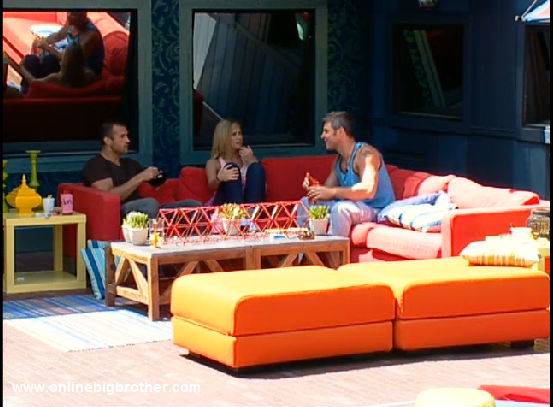 11:15am Adam and Keith are laying in their beds talking. Adam is giving Keith pointers on how to play the game and how to make himself look good instead of bad. Meanwhile out in the backyard, Jeff, Porsche, and Brendon are talking and joking around. They are talking about Keith and why he would lie about his job. Jeff says that he doesn’t care if he’s in human resources, a matchmaker or a garbage man. Jeff teases Porsche about having a thing for Keith. Porsche says no she doesn’t. Jeff says it hurts when you get hit by cupids arrow. Porsche says that her dad would kill her if she dated a black person on tv. Jeff asks WHAT?! Really!? Porsche says well he’s from Michigan. Jeff jokes and says oh well okay!? WTF?! 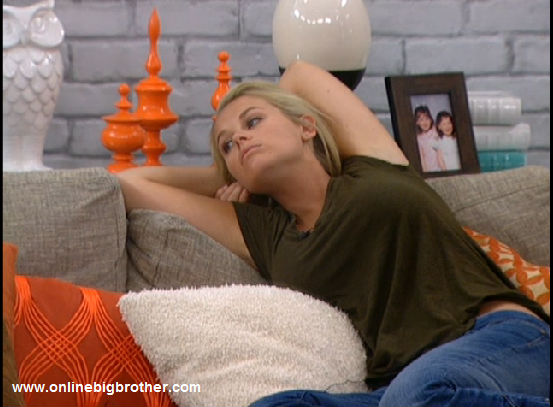 11:30am Up in the HOH room. Rachel asks if Kallia took the bible fron the sequester hotel? Kalia says no. Rachel says that she did that there was a note that said they could take it. Rachel gets called to the diary room Kalia says that she is over Lawon. Jordan asks her if lawon is making up stuff. Kalia says that she doesn’t like Keith and that she didn’t have his back. Jordan says that Keith is going to say anything to save himself. Kalia tells Jordan that Lawon keeps promising Keith he has him.

11:35am Big Brother switches the live feeds to TRIVIA.. which means the POV ceremony is happing right now..

The silicone hooker can read, and wtf the bible!

So anyone know how the POV works? If it’s used does the duo come off the block, or just one person?

If POV is used the duo comes off the block

Thanks. That’s interesting. In that case, I think I might have used the POV. No one likes Keith or Porsche really, it might have been beneficial to keep them in the house. The vets need to get Dom out, seems he’s running the newb crew, or at least has everyone’s ear.

seriously, Porsche Dad will not let her date a black man on tv. The man named her after a car, that pretty much states it all for me. He is an idiot and so is she.

She said on TV, I wonder do she dip in the coffee on the outside? knowing chicks like her who”s family hates the idea of them dating black people they usually always do it secretly, everything that’s “taboo” for females always entices them.

They but a bible in the hoh room because there is no good advice In there for anyone so it’s no threat. It’s like having a Koran or book of more on or Scientology book in there.

Rachel reading a bible? That bible is going to catch on fire any minute now!

the fact that porsche made such racist comments means she should go, sorry but racists are disgusting insecure people and shouldn’t be allowed on the show…she needs to go….what a small mind, what the hell does that mean, he is from michigan!!! how dumb can she be ON TOP of being racist. seriously, very sad, and they should ban such myopic, antiquated worldviews, especially when they go unqualified and unfounded. i am seriously appalled.

Did you read her quote? She said her dad would kill her if she did. Porsche never said anything racist, she only stated what her father would do. No where did she say that she would be for, or against it.

Porsche’s Dad doesn’t believe in onner species dating. Good for him! Teach your daughters not to succum to beastiality.