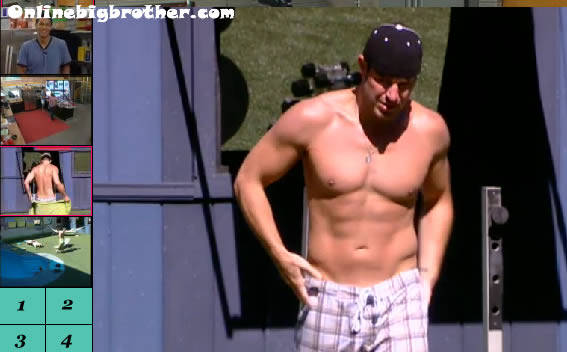 3:52pm Pool side Jordan, Jeff, Lawon Kalia. Jordan is talking about writing the HOH blog. She had no idea how to spell brendon she said when she typed B R E N D O N in it had those “red lines” under it. So she spelled it Branden. Kalia asks her how she spelled her name. Jordan said somehting like “k a l e i g h ” Jeff laughs “omg if i know how to spell something you have to be able to spell it” jeff says usually Jordan is a much better speller than he is. Kalia says Everyone in the house is really gassy she never gets gas like they do. Jeff says something is wrong with him right now… Kalia asks if Jeff could re-write how him and Jordan went how would it go. Jeff:” it would be fall and I would be wearing a scarff… ” Kalia shares a story about how her friend was dating a serious A list actor and she went out with him and was earing cowbot boots when it was 80 degreees outside.. They start talking about filling out their “forms” before getting on the show and they had right down their favorite foods. (kalia talks food and sex and thats it) Jeff says he wrote down beef jerky and corn dogs. Kalia wrote down red velvet under every box. 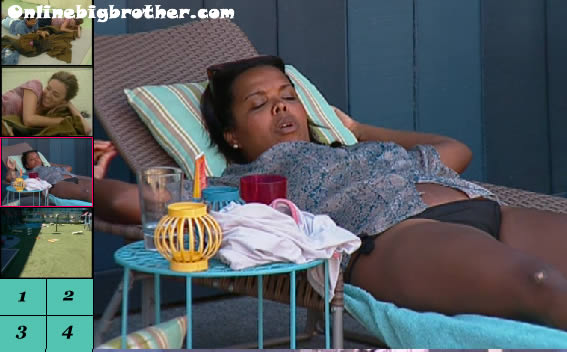 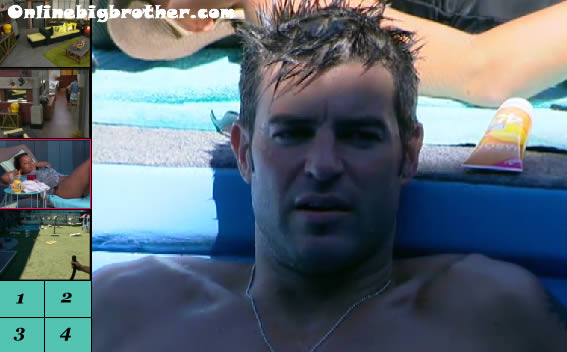 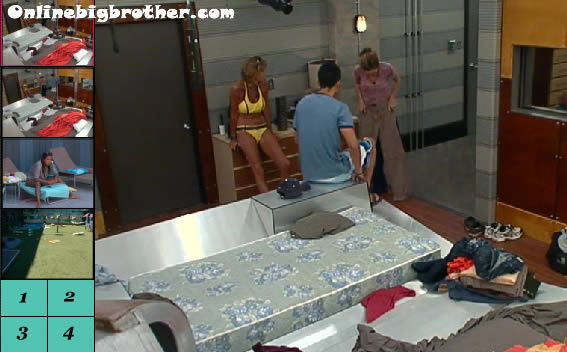 4:00 Dom, Shelly and Cassi Talking about what cassi will wear on Thursday.. They’re giving her advice about how to look the most fierce.. Dom says none of the grandma suit shit.. Shelly ohh thats classy ohh thats smart.. ohhh big hair. Dom: “don’t go overboard just go out there rocking sexy”. Dom point out that Cassi has “killer clothes” and asks her why she didn’t wear them more. Cassi: “I didn’t know I was going to be here for only 2 weeks” They start teasing Cassi about her hair how she needs to really clean up “that Nest”. Dom asks her if she’s found her necklaces, cassi found one but the other one is missing. They start talkign about all the shit they’re missing. 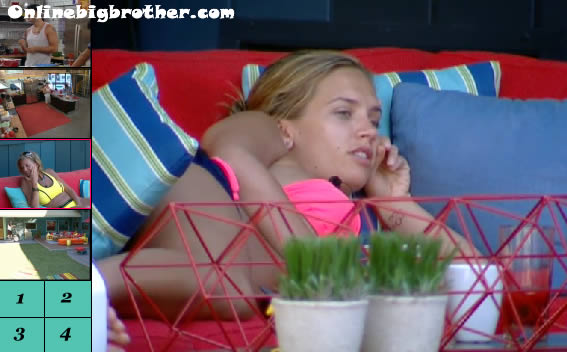 Shelly is saying that POrsche is a strong competitor, that her game is “Headed in the right direction”. Porsche agrees but thinks the strongest one in the house is Dani then Rachel. Shelly adds it’s kalia then shelly at the bottom. Shelly isn’t sure that dani is the best physical competitor she thinks Porsche might have more muscle. Por says that Dani is in way better shape than Rachel and even though in her mind POr is in good shape she’s seen Dani work out and she’s probably better in Endurance because she’s smaller. They go over the first competition where they were hanging on the bananas. Por says sometimes if your too fit with too much muscle you’re not as good at the endurance comps. Shelly agrees points out that she thought Keith was going to be up there all night. Por adds that Jessie did do very good because his muscles cramped up. They both hope they can each win a comp before they get evicted. Shelly: “I think your game has a huge amount of direction” Por: “yeah i’ve been working the house a lot lately”. Por says she wants to get rid of the people that will be problems with her mental santiy. Pinto: “My mental game got good but beating these people physically is going to be tough” .. “I’m trying to be abbrasive and messing peole up because that is what you have to do is mess people up before the comps. ” Shelly ohh yeah your playing a strong game right now if you ever want to talk i’m here. POr: “Sure thing”
Shelly leaves says she needs to tan her back 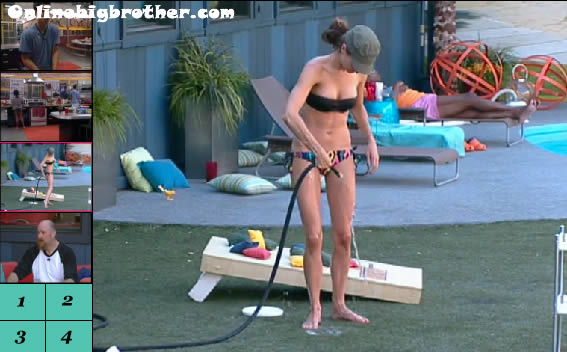 This is most likely the last Cassi bikini shot of cassi :(

me
Reply to  COCO

in all fairness, cassi hasn’t been eating since she’s been on slop for two weeks. she looked alot healthier when she got there.

Way too skinny. And I like skinny chicks. She’s been eating nothing but Jelly Beans on the feeds.

Pinto Got “Mental Game”? Has she eaten some poison, while scarfing all that food? She sounds as delusional as Brenchel with their We’re so smart, their so dumb, rants”

rachoe needs a shave she has a 4 oclock shadow and her stach needs a trim.

Shelley makes me want to vomit. All I hear is yea your right, yea you are playing a great game, yea your awesome, yea yea yea. Blech!

“Kalia says Everyone in the house is really gassy she never gets gas like they do.”

Yeah, I think a person has to move instead of staying still 24/7 in order to get that gas out. If she ever bends down to pick something up I’ll bet she’ll find out how much gas she really has.

In only a few more days we’ll see a bee fly by Shelly and then we’ll hear her proclaim, “You are just great in flight, little bee. I thought the mosquitoes were good but you are just AWESOME! I sure wouldn’t want to be up against you!”

once again brenchel get picked for something. i am so sick of them 2 being the focal point of this show thus far. once rachoe is gone brendumb will follow as he will curl up and die then the show can move foward and give the newbies a chance at some spotlight.

Racho has to go she makes me want to puck……

rachel i hate you your a discusting bitch your so ugly my butt looks good.

really rachoe you took gymnastics? (what havent you done) is that why you fell twice before completing a circle.
and jeff telling her off YAH

HAAAAH Rachel runs and hides in the bush. She probably had to rub some dirt in her eyes to make her cry.

Please tell me when Rachel is leaving. I really can’t take her all season. What a bitch!

Bhahaha! Rachel crying in the tree, LMBO! Oh, that is just perfect. Way to go Jeff too.

Yes we all need some RachOFF

Rachel should’ve won this, she used to putting big things in her mouth… guess she’s been out of practice for a while

All Rachel needed to do was dump the entire jar of gumballs into her – YES there is plenty of room – chew them up all at once – YES she has the ability – and then ‘machine-gun”-style fill in her picture! She’d only need to cross the balance to check her work! Slow curtain, the end.

She participated in a contest like this not to long ago when she was “Vegas.” Hoiwever, that contest involved golfs. farthest distance and only using her “down there” area! I heard she shot one gold the distance between “Circus Circus” and the Bellagio. She missed taking out a tour bus “by a hair!”

I wish Brendan would have punched Jeff in his stupid face.

I think you mean I wish Jeff punched brendumb in the face?

Rachel: OMG I can’t get my way, waaahahaha

Typical just like last season, if she gets her way she throws it in people’s face and when she looses cries and pays the victim. GTFO Ho.

jordumb putting up cassi after she went on and on about how sweet she was and how much she liked her? seems like that was rachoes influence. i think jordumb did not want to upset rachoe. f u c k rachoe she’s a nasty vegas hoe reject. LOL

that was one half ass apology from rachel.
her crying in the bush lol moment for me.
man, i cant take dani’s voice
sneaky little chick

Its getting kinda annoying that Big brother is always making the show about brendon and rachel. It’s getting old.