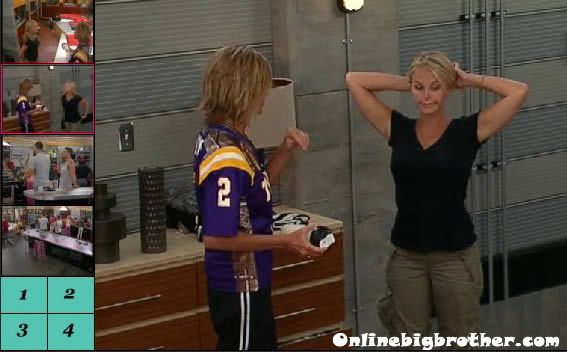 8:45pm Bedroom Shelly and Jordan Shelly is telling Jordan that the newbs have no clue she voted to evict Keith. Jordan says that’s good we all played it really good. Shelly: “right after it happened they were freaking out” Jordan well what rachel was doing is messed up she shouldn’t of done that” Shelly: “That why she always has a hard time she always does that” Shelly: “That’s why you and him “Jeff” are going to the end because you guys don’t do that shit… everyone adores you guys” Jordan: “You’re going to make it to” Shelly: “no I want you guys to get everything you want in life your mom your brother” (Alright Shelly has to be playing jordan a bit here seriously she’s stroking the repeats egos like never before and their lapping it up.. awesome) Shelly says she expected the Big Brother House to be much more active. Jordan thinks it’s still early in the season, something big is going to happen. 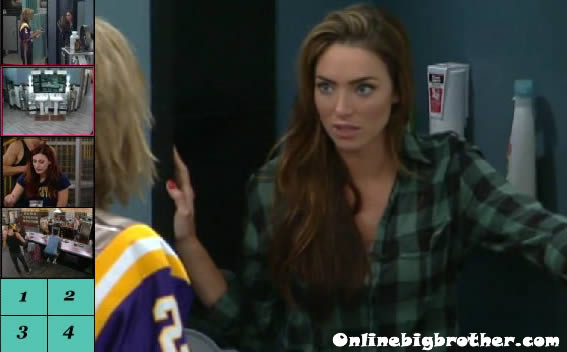 8:50pm Bathroom Cassi and Shelly Cassi is saying that they have to keep winning HOH every week or the repeats are just going to pick them off one by one. Cassi tells her thats not going to happen their all good. Cassi says that Jordan does not want her and Cassi up it’s not going to happen. She say Cassi need to calm down about Porsche, it might just be her but she thinks they are all good. Shelly tells her she needs to suck it up and just go cassi isn’t going to gain anything from fighting. Shelly: “I don’t want you to be said I could tell it in your eyes I got your back” Cassi tells her the other side is playing a good game it’s going to be tough. Cassi knows, the thing that gets her is Adam why did he flip like that, She can understand why Kalia did what she did. Cassi: “I knew this was going to happen I knew he was a big fan of the show and loved those cast members” 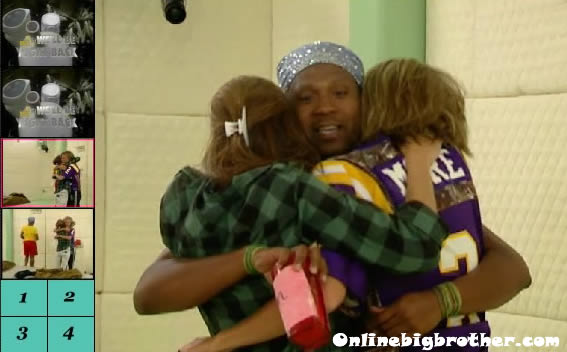 9:05pm Have Nots Cassi and Shelly Shelly is trying to make Cassi feel better about Por. Cassy says the only reason why she was cold to Cassi is because looks at Cassi and look at her. Shelly starts to get up says Por tells us every 10 minutes she wants to be a actress and then when showtime starts she goes “Oh showtime is is one and does that little sex kitten pose.. I would look dorky even trying to do it.. I’m like WHHHHHY.. What people are saying in this house does not partner up with their actions” Shelly brings up Rachel and how she is always saying she wants a second chance, “SO WHY NOT CHANGE.. I don’t get it I don’t get it” Cassi brings up POr’s outfit for the live show, they both laugh, cannot believe she wore that. Cassi: “When I saw her walk around the corner I thought she hadn’t put anything over it yet” Shelly: “I thought it was a shirt”

Shelly tells her that all the girls are jealous of her and that’s why there being the way they are. Lawon enters the room tells them that the back is open. Both Shelly and Cassi freak out that they now get to go have a smoke. 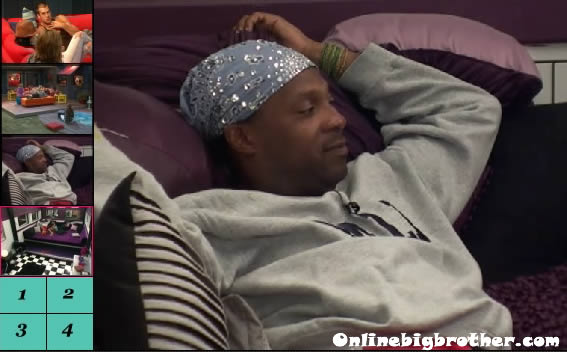 9:25pm Lawon and Kalia Fortune room Lawon is telling her he thinks that Cassi and Dom flipped. Kalia is shocked but she can see why. Kalia mentions that next HOH she might try for or perhaps the one after that. LAwon says he’s going to wait and see where the house heads. They both think that the game is going to get really ugly and some players in the house are not up for it. Both Lawon and Kalia think they are good for another 2 weeks. 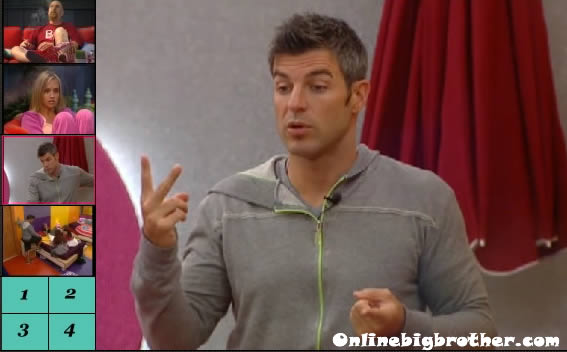 10:00pm Jeff, Jordan and Dani Jeff’s got a plan he think they should put Adam and Dom up over Cassi and Shelly. HE’s confident that because they have Shelly in their pocket they don’t have to worry about Cassi as much. Jordan adds that she feels that Shelly can be trusted and if Cassi wins HOH next week she will not put the repeats up. Jeff continues that if they put Dom and Adam up they can use the golden key to their advantage tell Dom that they are going to give him the golden key but take his partner out of the game. Dani doesn’t think it’s a good idea she thinks he’ll get pissed off and won’t work with you. Jeff doubts it’ll be a problem he’ll just tell Dom that they have the votes now so they decide who stays or who goes home. Jeff also thinks that puttign Dom up will scare dom shitless and he’ll follow them. Jeff thinks it’s a great idea it give them a chance to take 2 of their players out. Jordan mentions that Dani is closest to Dom she can work on him. Dani wonders if it’s a quiz and Adam gets it. Jeff: “Then we put up Shelly and cassi, Cassi goes home” Dani: “What if Cassi wins POV.. Then we’re screwed” Jeff: “Yeah then we’re screwed” Dani points out that Cassi will be good at questions. The other 2 do not think so. Dani: “All i know is it’ll be easier to earn hi trust if we don’t put him up” Brendon joins them and Jeff leaves to grab a smoke. They ask brendon if he noticed any ones faces when the Jordan won the HOH. Brendon and Dani say he looked devastated. Rachel is brought up and Brendon asks Dani to talk to rachel and try to get her to calm down about Cassi. Dani asks brendon if he’s talked to her. Brendon says he has but it might be a good idea for them all to talk to her (Cmon rachel save this season go berserk) Brendon understands why Rachel is acting the way she is because Rachel likes Por and wants to stick up for her but why is she doing this shit again. Brendon tells them that was what screwed up their game last year why do it again this year. They start speculating what the next POV and HOH comp will be… Kalia joins them. .(UGH) 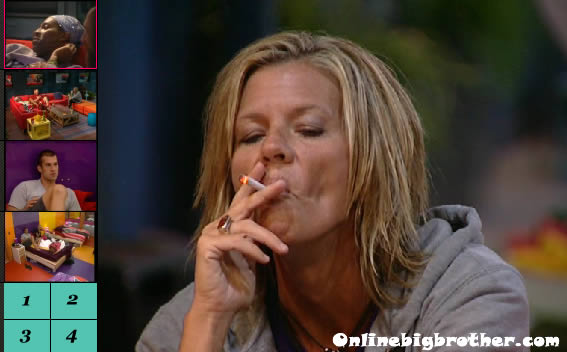 10:38pm Backyard Couch shelly, Adam and Lawon Talking about the competition, Adam says that Shelly was really close to winning it. Lawon says it was all luck. Shelly called in the Diary Room. Lawon: “And to think I would be watching this at home that shit is crazy… Crazy”.
Lawon walks up to Dom whose in the Hot Tub tells him not to worry it’s just a game.
Dom: “What were you going to tell me before the show”
Lawon: “I was going to say I thought I was the only vote for Keith to stay”
Dom: “I don’t think i’m going to last in this game”
lawon: “don’t doubt yourself your not a Doubter”

They head over to the Hammock to talk some game

(I missed the conversation with Adam and Dom.. Dom still thinks Adam flipped but never calls him out on it.)

BB needs to give them alcohol!!!!

Who hasn’t had enough of Brendon’s bitching? If Brendon and Chuck Norris were having a passive-aggressive contest, Chuck Norris would meet defeat for the first time ever.

OK, maybe not. We are talking about Chuck Norris here. But it’d be a narrow victory.

So I am actually in agreement with Rachel? Say it ain’t so, Simon.

Yesssss!! Maybe they’ll have a dramatic breakup and give us something good to watch.

That sounds right, can you imagine his blow up when she gets drunk blacks out and wakes up naked with a wade of cash in her hand from a night of sex with one of them rich friends she claims to have?

He holds the wedding over her head. Brendon is such a control freak! I hated him last season.. this season I just wanna tie him to a pole and beat the crap outta him. LOL

I totally agree with you about Brandon. He IS a control freak!!!

Yeah….he’s a control freak…..would love to smash him a couple times upside that BIG DOME ….. He is an Idiot….

Despicable Me
Reply to  Simon

I can see potential domestic violence with brenda and Rachel, and I’m on Rachel’s side she’s an annoying ho-bag but Brenda is a potential psycho.

Simon
Reply to  Despicable Me

potential psycho i can see

Wow, go Shelley. I’m impressed, she’s got some game. None of them suspect she flipped at all.

I’m enjoying tonight show, Im not even carrying about who wins anymore I already know one of the vets

Do they actually get a golden key? I haven’t’ seen 1 yet.

It is like the regular key but it is gold colored

They have to say it

Oh , I thought they did it to gloat LOL

How many Bacon shirt do this dude got? I saw 3 I think

Did Brenda just say he shaves his balls? Rachel sucks those too, lucky dude HAHA

More importantly, where can I get a Bacon shirt? Bacon is the most awesome thing ever!

Those are great!!!! Thanks!

Simon what was Brenda looking at with the Tv monitor? can they see the backyard or something

can’t see the backyard just living room and chessboard.. maybe another room to

They could see the camera views of the kitchen, outside the HOH room door, living room, and the fortune (lounge) room.

It is Simon’s site. He and Dwag feed are addiction. He is being modest and sits through hours of boring stuff to tell us the good stuff!

Wow! Dani is playing a spectacular game then Shelly, they are playing both sides of the house and sitting pretty! Especially Dani, I can see the evelyn dick gene in her but more subtly!

Getting Adam out over Dom is the worst decision. Dominic will always be pretending to enjoy being around the vets but he’s out to eliminate them one by one! That’s the dumbest move. Hopefully Rachel, Brendon, & Jordan disagree with him BIG TIME!!

Lmao! Okay, that is a very funny thought. The HoH just randomly disappears.