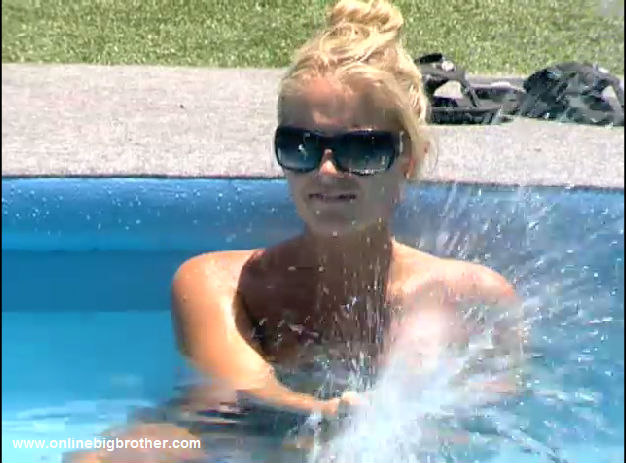 This Live Feed Update pretty much outlines the house guests laying around sunning themselves. The girls play “would you rather”, JJ mess around with the hose and Kalia wants to throw in the towel because she hasn’t mad any connections yet.

1:30pm Jeff and Jordan are in the pool. Jeff asks her to spray his face with the hose. Jordan does and it goes right up his nose. Jeff says stop you just gave me nose an enema. 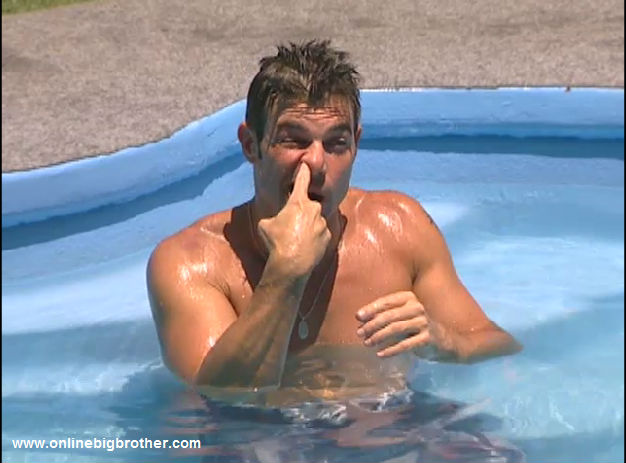 Then Jeff tells Jordan to spray Rachel while she is sleeping by the pool. Jordan is really nervous and Jeff asks Brendon if its okay. Brendon says yeah do it. Jordan says are you sure and they all laugh and tell her too do it. Jordan sprays Rachel with the hose and she wakes up and freaks out not knowing whats happening. They all laugh. 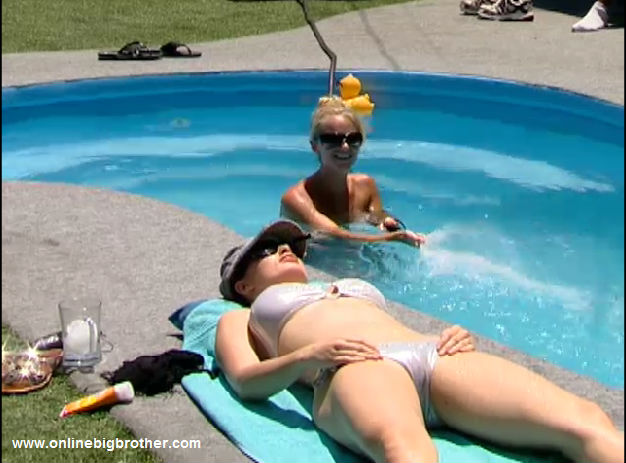 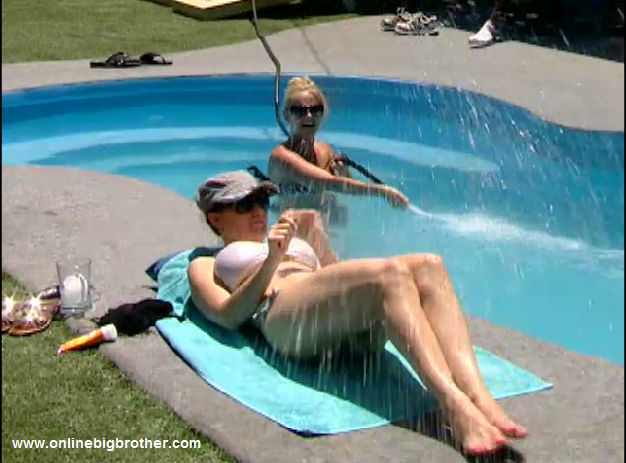 1:45pm – 2:15pmThe houseguests by the pool are all laughing and joking around. They start rapping and then play word association games. Then Dominic asks Kalia if she wants to play would you rather.. Would you rather have $500 a month or 10 years added to your life? Kalia says she would want the money. Would you rather wake up and your entire body tattooed or entire body has piercing everywhere and you cant take them out? Would you rather have no nails on your hands or no eyebrows? Cassi asks can you paint your fingers? Dominic says no. Kalia and Cassi both say no nails. Would you rather poke yourself with a big needle every day to survive or stick it I* Y*** B***? Cassi asks what like a ? Cassi asks would your rather wear clips on your ni****s all day … Adam walks by and says yes! ..oh was there an or? They all laugh.. Cassi smells spaghetti and asks if someones cooking it? Dominic says that she has a good nose …you can smell my farts like three days later.. and say what I ate. They laugh and say eww.. Cassi says yeah its true ..the other night I was like it smells like ketchup and … 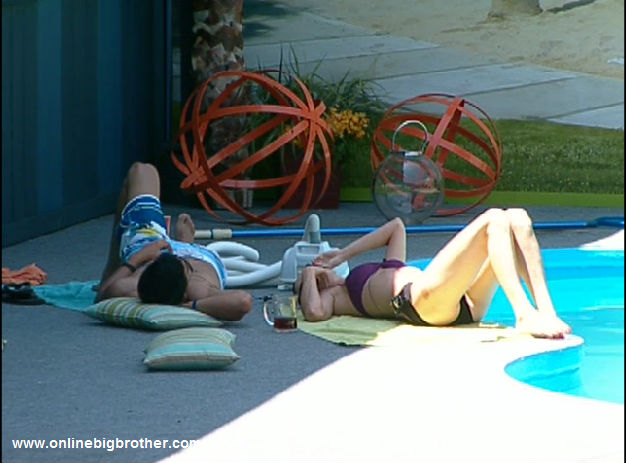 2:20pm Jordan, Jeff, and Kelia are laying out on the loungers talking about how hot out it is. Jordan asks Kalia if she wants an orange. Kalia says NO! Jordan says oh yeah sorry I forgot you can’t eat.

2:35pm – 3pm Shelly and Dani are whispering and talking in the kitchen. They are talking about Cassi and how her true colours are starting to show and that she’s starting to think she has game. Dani says that she is cool but last night it got to her when she was outside with Cass, Dom, and Kalia playing would you rather… and they were saying mean things about other houseguests. Shelly and Dani talk about how Cassi is running the newbie’s side. Meanwhile, in the backyard Jordan tells Jeff about Kalia’s plan to get herself and Lawon nominated so that Lawon can get evicted and she’ll get the golden key. the conversation changes to talking about where they will vacation and travel after the show if the win. 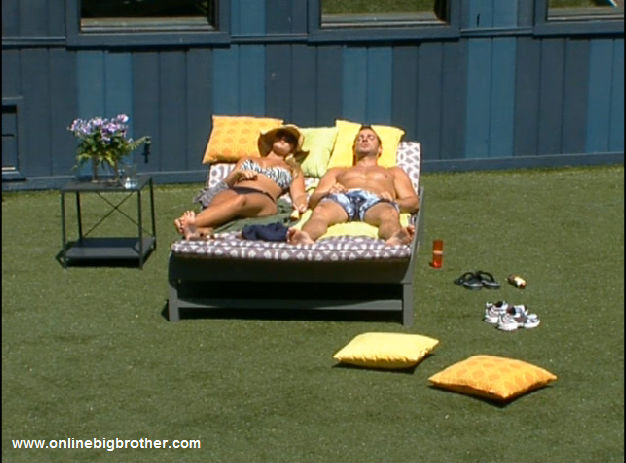 3pm Dominic and Kalia are in the pool and she is working him, telling him that she wants to go home …that she know she won’t win ..that she has a one in 14 chance and knows she wont be the one to win. She says that she isn’t make connections with anyone and that she could sit in the corner there for hours and no one would come talk to me. Dominic says yeah ..I like you and I see what you mean …most everyone else has someone. He tells her not to throw in the towel yet .. She says no I’m not …that’s why I am just telling you .. 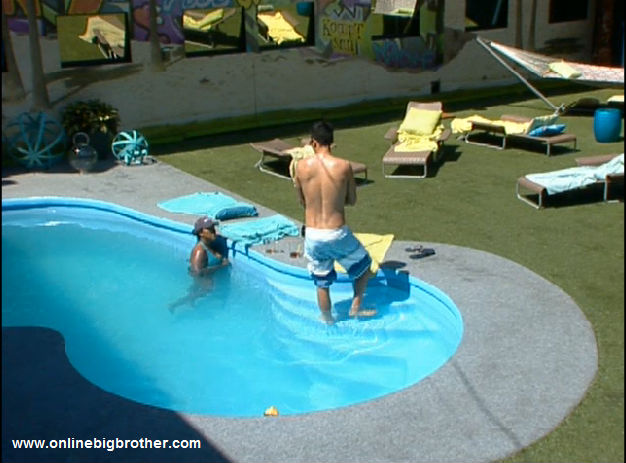 B B
Reply to  Danna

I am with you on this one. I cannot stand Rachel. I don’t understand why everyone is so scared of the Vets.

Still way too many people in the house with silly new twists. I just can’t get into things yet. I honestly don’t care who leaves – just leave. Dick had the potential to really stir up crap and get under people’s skin. So obviously since I don’t care who leaves, I don’t yet particularly care who wins:(

Rockstar
Reply to  kathie from canada

I’m with you Kathie..

There are some pretty lame strategies with this crew. Kalia’s strategy(if you can call that) might’ve seemed crafty had she not already shared it with Brendan.

It seems to me that at least one of the vet duos would’ve been bright enough to figure their best strategy would be to align with the newbies and take out their worst competition-other vets-first. That way they would’ve made eight new friends AND got rid of more informed (I won’t say better because I still don’t believe Jeff and Jordan have an IQ higher than 10 combined.)

Brendan and Rachel are fooling themselves if they think either one of them would be chosen winners over Jeff or Jordan. For some reason people adore those two simpletons.

Brenchel will never win because they have 0 social game, their isolating themselves again, only difference is they have isolated themselves with the other vets, they still playing the same game they played last year.

If the vets did that, the newbs will just backstab the remaining vet…….

Would you rather poke yourself with a big needle every day to survive or stick it up your butt?

Kalia is stupid. Doesn`t she know that the pawn goes home!! I don`t think any of them except maybe Dani have understood the implications of the keys. On the plus side you are safe until final 10, but on the downside, you can`t compete for HOH or for POV. If your allies need you for a POV, you can`t do anything but watch. Once the first eviction goes down, they might start to realize it. Lets say that Keith goes home (I hope) and Porsche has the key. On the plus side, neither Dani nor Porsche can win HOH or POV, so they are neutralized and their partners are gone, leaving just 5 couples in the game. If a newbie wins, its safe to say one of the vet alliances are going down, so lets say Jeff goes home and Jordan stays, but she is completely useless to Brenchel and they would be completely on their own until all the gold keys are taken, and supposing they survive the next eviction. Brendon and Rachel have isolated themselves so badly that they will be sitting ducks. On the other hand, if a noob pair goes on the block, let`s say Cassie and Shelly. Cassi goes home and Shelly can`t compete, leaving Kalia, Goofy, Adam and Dom to regroup against two vet alliances. By the final 10, there will only be two pairs intact, and they will immediately be targets once the sidelined players are back in the game. It all means that they will have to regroup at final 10 because it will be a whole new game. Having the gold key is a blessing and a curse, but its better than going home.

It’s kinda annoying that the prior HG are playing such a predictable game. I would have preferred that they would have played it straight and not aligned with themselves. Actually I was looking forward to a season of no previous HG, especially annoying ones like Rachael and Danielle. I know there are a lot of Dani fans, but Dani loves to talk smack about people behind their backs, stir up trouble and spread gossip to make early targets, getting others to do her dirty work. Crafty yes, but annoying nevertheless, especially when I may not be ready for that person to be a target. Like Cassie. I like her. She makes the game interesting on the newbie side. She should have trusted people less and kept her mouth closed, but now they see her as a threat and can’t stop talking about her plotting even though it’s what they do 24/7. Would love to see her win HOH and shake things up.

It looks like I’ll be tuning out of this season early if things keep progressing as they are. I’m not a fan of Keith and frankly wanted him gone as soon as he spoke a complete paragraph, so good ridance. His intro in the living room gathering was awful and was downhill from there, but I guess I’m just a newbie fan and just hate to see BB tip the scales of such a great game in the favor of past HG so soon. Had this been simply a game of newbies it would have been awesome.  Instead I’m stuck with all of these past HG I already know. WTH’eck nothin’ new to learn about them and then they dominate the game instead of turning on each other which is probably what BB would have preferred. I know I would have. The pairs thing is a great twist but it should have been a new cast or unmatched old HG paired with new HG to make it fair and interesting. Now I’m stuck listening to Rachels awful laugh for an entire season. For someone so book smart she’s not very bright, which is also annoying to watch, because unlike Jordan she doesn’t own up to it. For those who don’t get why people like Jeff and Jordan, it’s because they don’t seem fake. I watched the drinking game on Showtime after dark last night. Brennon lost several times but basically lied or turned the attention to someone else and avoided performing the task and no one called him out it. I thought that was very dishonest. Dani tried doing it several times as well. She’s very sneaky. Sorry I’m not a huge Dani fan. Don’t hate her, just don’t love her.

It’s boring to watch past HG manipulate and control the house. I’ll watch til the first eviction and 2nd HOH, but if a past HG wins again, I won’t be watching another episode this season and will consider it a Fail. Just my opinion, of course.

I like you Chloe! I think you said it perfectly! I’m not even in the house, but like you… that is what they all have to look forward to. Do you think they’ve thought this out past the next eviction? Maybe Danielle has, but I noticed her holding back or biting her tongue. Maybe not enough.. ha!

Yes R. B. I’m with you as well. The vets are cocky and I would have preferred too, that it was a game of complete newbs.
Keith and his whole phony christian counselor, Jimmy Swaggert impression pisses me off. Be gone you fool!

i don’t think they’ should’ve brought the vets this season. they shoulda just saved them for bb all-stars 2. that would’ve been better.

Big Brother is produced just like Survivor. Same ole same ole with a new twist that is supposed to SHOCK the world.
The people thinking up these shows are dumber than retarded and people that continue support to these crap fests deserve the SHUT-IN life they reap as they watch show after show of other people living their lives.
We are going to get stuck season after season with veterans they pick out as celebrities from prior seasons. I am boycotting both shows. It is retarded to use the same players over and over in REALITY shows. Especially re-using IRRITATING ones.