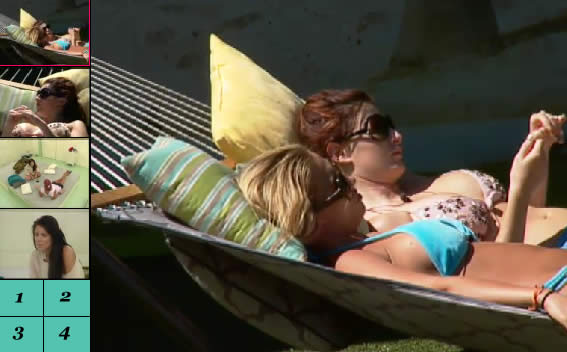 Porsche wants to get HOH next week and Put up Sjelly and Kalia she really dislikes them both. Rachel thinks that is a wicked idea. Rachel: “i really hope you get HOH… yo know so we can see your family photos and stuff” Por brings up dani in the bikini again. Rachel: “it wasn’t hotter it was what the people on cbs.com said they would rather see” Por agrees says that the reason they voted Dani is because, “Brunette and real boobs are kinda in right now” POrsche starts talking about her boyfriend says looks just like dom but is better. Pors starts talking about her relationship and how Awesome rich and powerful her guy is. 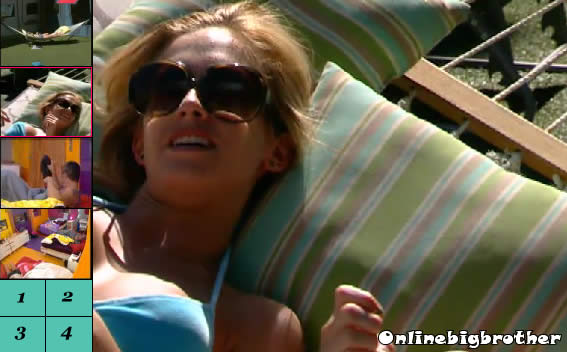 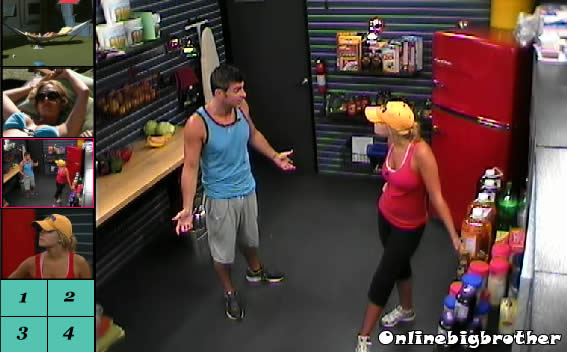 4:20pm JJ Storage room Jeff starts off by saying he trusts Brendon and rachel 100% he was up tin the HOH and they talked about everything that is going on in the game and all the things dani has been doing. Jeff says that Rachel and Brendon were thinking about him because was working it trying to convince it was their best shot. Jeff adds that Dani said she wanted to keep Jordan around as a pawn because Jordan won’t do anything. Jordan: “Why does everyone think i’m so useless”. Jeff elborates on Dani’s plan. They wanted Dom to win the veto then use it and BR was going to put both JJ up. Jeff says that Brendon and Rachel were thinking about it but Brendon started getting worried about Dani after she was pushing for Jeff to go up before the POV competition. Jeff: “dani was planting the seed in BR that we were plotting against us… Where she BLANK up was that if they got rid of me then you would be pissed at them so it would be the entire house against BR… Brendon just figured it out”. Jeff tells her to keep it on the down low and not say anything to Dani talk to her like normal.
Jordan: “we’re going to get rid of Dani?”
JEff: “hey next week… BLANK Snake”
Jeff tells her not to say anything they cannot have Dani know she’s the target, Jeff: “I can’t believe she broke so soon.. if she wins next week she’s putting up brendon and me for sure”.
Jordan “maybe she’ll put us up and try to back door one of the guys”
Jeff: “Sneaky sneaky”
Jordan: “yeah.. she’s like that”
Jeff: “she’s smart but that was a stupid move so early… should of waited. ”
Jeff points out to Jordan that Dani is working on Por and she’s going to get Kalia. Jordan sys she’s not
going to say anything to dani and she’ll be normal around her.
Jeff says that Dom is playing it pretty cocky right now for someone whose up on the block against Adam. 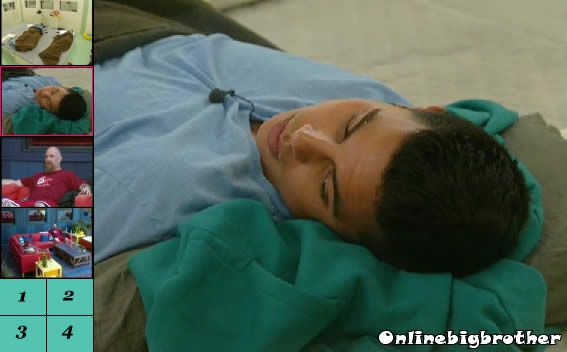 4:50pm Dom and LawonDom saying he doesn’t trust Shelly anymore.. he did back when Cassi was around but not now. He knows she’s playing with JJ. Lawon asks Dom if he trusts Adam. Dom thinks Adam is a nice guy and all and can sometimes be funny but the thing that worries Dom is that Adam is so star struck that he would not put BRJJ up regardless so he would target us.

Lawon tells Dom that the trust they have is the only solid thing he has in this house, “I’ve had your back since day one”. Lawon thinks they might change the game after couples are over, is feeling like a twist is coming to shake tings up. Lawon: “What do you feel about dani”. Dom: “I don’t know but you know where her loyalties lie”. lawon winders what POr’s play in the game it. Dom doesn’t know think she’s a bit pathetic. lawon tell Dom to LOOK OUT por is going to stay for a long time.. BRJJ will keep her around because she’s useless and is a vote. Lawon thinks that Adam is gone this week. They both agree that Veto will not be used and Dom thinks he can pursued JJ to give him the votes. Lawon says he’ll vote for Dom. Lawon warns him that Dani is very good at comps and the next HOH will be endurance. Dom says that they’re only hope is for someone else to win HOH. (Other than JJBR) 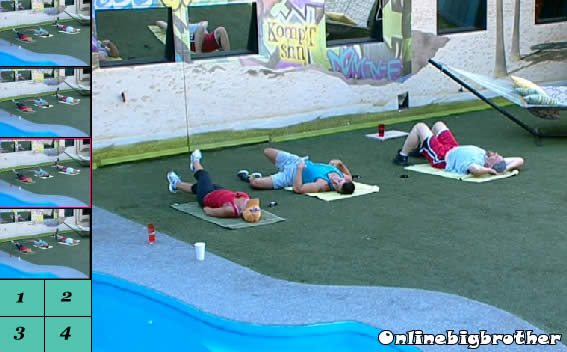 They are going to have to backdoor dani next week bc she will win the veto if she’s in the competition!

Agreed. They need to play like there’s still a final 5 deal until the POV is won and if they have the chance at that point, then they need to get rid of her.

Since I discovered this amazing BB site, watching the actual TV show is such a let down. Sooo scripted and edited to make certain people look good. I think i am just going to watch the live Thursday night shows and get the rest of my BB fix right here cause it is much better then the crap i just watched….

I agree, watching the show now seems so boring and scripted! Esp since I already know what’s going down on the following 2 episodes.

That’s how I roll, too. And the one night is painful to watch.

Dani is now openly lying to B/R about Jeff especially. Kinda weird she’s getting so desperate to have J/J put up and Jeff sent home. I guess POV ceremony is tomorrow. B/R have to see that this only benefits Dani and not them. But they’re stupid enough to listen to Dani. I’d be shocked if somehow Dani pulls this off. The game will be set up for her to win.

I like Dani but she is so limited on how to get ahead of BRJJ to win the money, pushing for Jeff to be backdoored appears
to be her only move. I admire her for going after the 500k. The next twist could help her regroup after Dom is gone.

I hope dani pulls through. I cant stand jj and br together. I dont want to continue watching a dating show. Plus i dont want to see two couples in the jury house. This madness has to stop. I hope dani or adam, or lawon wins hoh . Put them vets up asap

Of course this is easier said than done, but it’s too bad Dani didn’t “push” to get Shelly out with the Newbs. Since now it doesn’t matter either way. Her plan to have Dominic to do her dirty work shows she thinks she is smarter than the other people in the house. She looked at Cassi as being in the way but Cassi would have been a continuing target for Rachel. Now Dani is going to be on the hit list quicker than she would like. I do hope she can pull it together. I don’t want one of the two couples running the house and making it to the end together.

“Brunette and real boobs are kinda in right now” <<<<< LMAOO I SWEAR DANI HAD FAKE BOOBS :|
did she take them out or something? cause on her season she had the body of a 6 year old asian boy who had fake breast's

So much for Danielle’s “amazing” gameplay. Now JJ is determined. If Brenchel leaves the nominations as-is, Dani is a goner. She’s so stupid. I can’t believe she’d show her cards so soon. Just proof that without her daddy making the plays for her, she’s useless.

If Jeff or Jordan get backed door that’s messed up