1:50pm Jeff, Jordan and Kalia are in the bathroom. Kalia is teaching Jeff some dance moves.

2pm Brendon and Cassi are talking game in the lounge room.. Brendon tells her that he made the same deal with everyone that if they aren’t put up this week then they wanted to be safe next week. Cassi asks who they are thinking of voting for… Brendon says that his policy is to not say who he is voting out …just for the sake of that person ..until right before.. because no one wants to feel like they have no chance left. Brendon then asks who she is thinking of voting out Porsche. Cassi says yeah. Brendon asks if Cassi knows who Shelly is voting for? Cassi says Shelly is leaning towards voting out Porsche too. Cassi talks about how she doesn’t trust Keith …but that she has to think about who will be the lesser to of the two evils. Cassi is really trying to push for Porsche to be evicted. Brendon tells her that Porsche really doesn’t like you. Cassi talks about how Porsche has been acting and what she heard her say to Keith ..that she couldn’t believe he was campaigning against her. Cassi is like wait ..that’s what you are supposed to do. Cassi says that she feels like there have been more blow ups this season than any other ..and that she thinks its because of the old vs new twist. Brendon says that he will talk to Rachel and that they will tell her and Shelly tomorrow and see where they are at too. Cassi says that its a game and that they can’t stay forever.. 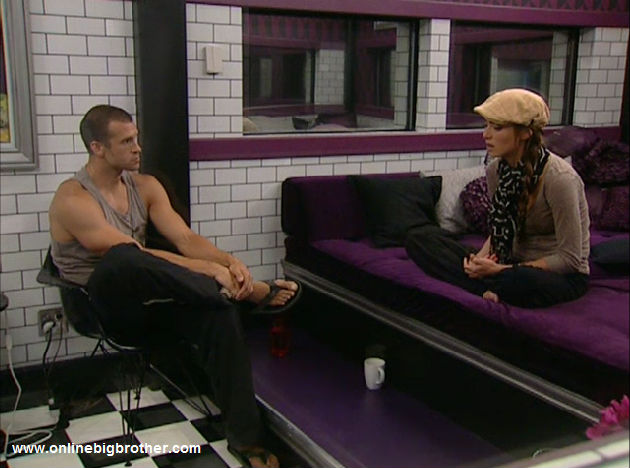 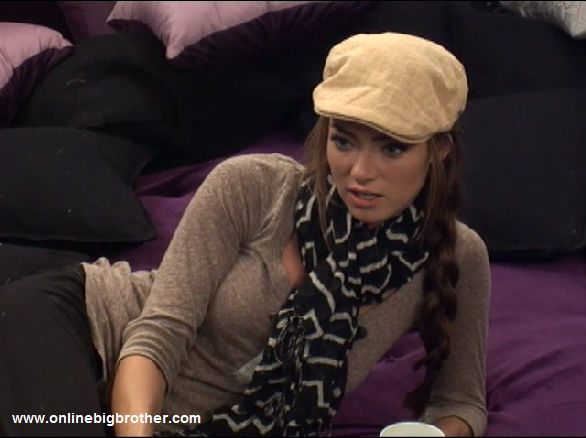 2:35pm – 2:45pm Keith is talking to Shelly and Lawon in the havenot room telling Shelly that she can’t let Brendon and Rachel strong arm them. Cassi comes in and Keith tells her that everyone was looking for her. Keith asks her if he was trying to strong arm her … Cassi is like what ?! No ..were just talking about Porsche and how we dont get along. Keith starts asking her more questions and Cassi just gets up and says she is going to go listen in on Adams conversation.. Cassi leaves the havenot room. After she leaves Shelly says that something is up! Keith says yup! .. Shelly notices that Keith is shaking .. Keith says yeah because he is the one that is going to get played! Keith says that people don’t need to be going around having one on one conversations.. Keith says that Cassi isn’t playing right .. Shelly says well that looks me bad too .. that ain’t right. Dominic comes in and Keith tells him that he wants to talk to him too. Keith keeps going off about how the newbies shouldn’t be having one on one meetings. We have the votes. Keith starts questioning Cassi why she was having a one on one meeting. Cassi says because I called him out to talk to him about my relationship with Porsche and how we dont get along. … 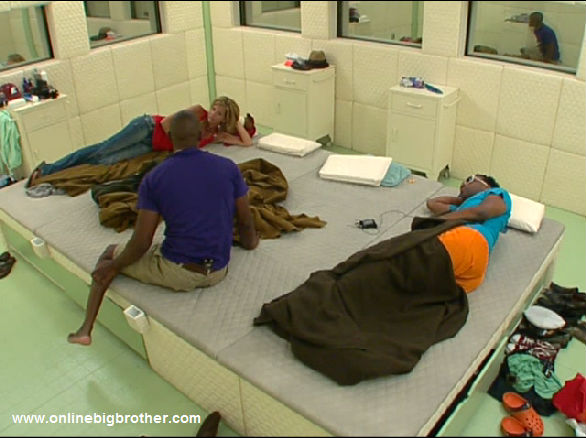 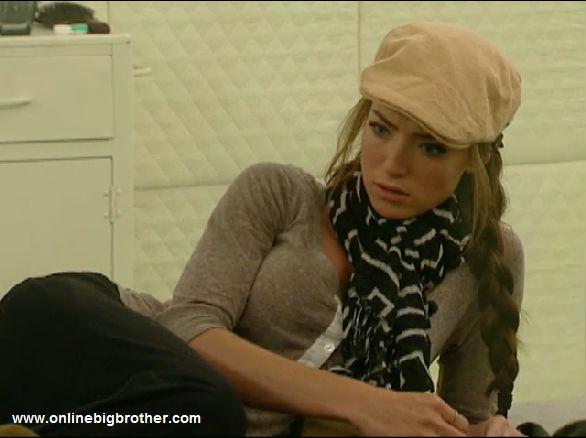 Shelly’s only choice is to vote with the Vets. Her problem is she is teamed with Cassi’s huge target. If a Newb wins HOH she wont go on the block and if the Vets win HOH she will go up and get the golden key. That’s her win-win vote. It’s too bad the first nite pairings dictated the game play. I would like to have seen the Newb’s partnered differently.

OR…MAYBE…Shelly realizes that she can’t win with the power couples there but wants to stay off their radar SO, she becomes a snitch but will vote with the newbies on Thursday. The oldies will never suspect that she was the traitor since she gave them real info. Like when Gnatalie voted the other side in season 11. She did it to cause drama but Shelly could be disguising her real alliance. I REALLY hope that this is the case. It’s the way I sleep at night…well, that and watching BBAD.

Safe to say there is a jealousy factor when it comes to Cassi. The girl’s just want to hate on her because of her beauty. Personally, If I were Dani, I would want to team up with her, at least she’s trying to play. Hope we see where everyone stands after the new HOH. Please let it be Dom or Cassi,.

honestly, she is very pretty, but cassi’s target has more to do with the fact that she really doesn’t play a good social game with the other girls and not her looks – she is a lot like kristin last year (although cassi seems to have a better strategic game bc she has more influence and power whereas kristin was passive and ineffective). Cassi is not the kind of girl who is going to have “girl talk” or hang out with just the girls and that creates a distance. There’s absolutely nothing wrong with it, it’s just the way she is, and she is not going to blend or be “fake” but she needs to have other allies and compensate with other parts of her game

I’ve to agree with above Porsche, Kalia, hell even Shelly are making attempts to talk to rest of the girls. Of course if I were a women i would think that she was pretentious and conceited because she thought (in this case is) she’s better looking than her other female counterparts. But to be perfectly honest I don’t think Cassi is THAT pretty I can find a few white girls like her right up my street (and I don’t mean hookers) but she’s definitely prettier than anyone on the last… maybe 3-4 seasons.

Is it me? But If Shelly is really teaming up w/ the vets. Well if she is I hope she gets voted out all the newbies have nothing bad to say about her

and her partner adores her. And all she is doing is running back and telling the vets everything. She could have a least waited to turn on her partner until they were put up for nomination’s. I do not like her at all now I hope all this backstabbing she is doing comes to light and all will turn on her

If one of the newbs don’t win HOH and shack the house up, this season is going to be boring nobody wanna watch a season with n4 idiots and 1 vet over powering the newbs to coast to the end literally without doing anything.

yeah im really hoping a new person wins hoh next week…cause the direction this game is going (and was designed to go) is so predictable and boring.

Well, seems to me the psych evals are getting looser and looser….I would like to either Yugo or preacher-man go……but, either way, unless something happens, this season is proving to be a snore just like last season…..tho the fights between brendon and weasle-face are kind amusing…..but it still looks like weasle-face is still playing brendon like a well used fiddle….idk…..love in the wild has more excitement than bb so far

I completely agree! Cassi can make a side alliance with another dumb-ass name, but how dare Shelly secretly align herself with the strongest players? I’d do the same thing

Seems like Shelly wants for her and cassie to go up next…..if keith goes home and they go up then cassie goes home and shelly gets a golden key. I really think this is her motive for siding with vets.

Why would Cassi talk real game with Brendan? I get that she has to talk game, but she should just make up crap, no need to reveal her hands to him. Still not getting why the newbies are even entertaining the oldies. IF one of the newbies wins HOH, and that’s a big IF, they could really put the heat on the oldies.

I suspect Production will ensure the oldies win the next round since they are handicapped by being in the minority. But it would certainly make for more drama if Rachel and Brendan are put on the block. It would force Sookie (Jordan) and Jeff to work for once. We’d finally see some much deserved kiss-ass being tossed the Newbie’s way for once.

has eveyone notice that cassi and dom are the only two that seem to care about the newbies, keith is dumb cassi is like the only one who is trying to help him

You have to remember we’re on the outside looking in… Keith doesn’t know who to trust, so he’s simply left to speculate.. if he were to think that Cassi had his back and low and behold she didn’t how would he feel.. stupid, so what else is he supposed ask and ask again, catch them lying or solidlifying his trust. Everyone out here is soooooooooooooo “smart”. Well guess what you’d be kidding yourself to think you’d would know everything had you’d been in the house. We don’t even know the things going in the secret within our own lives…

I was going to reason with you but it seems you missed the whole point of my statement so just read my name and follow the instructions..

yeah will then i hope you and your mom can read your name, folow the instructions.. and died

Sadly I’m none of the thee above but I’m sure you’re infantile, easily rattled and quite frankly unable to grasp that I was simply saying that you among other people are so quick to judge the situation ‘cuz you know all the facts..

You said a MOUTHFUL there! I completely agree…..its probably like ongoing mind-rape in there.

I don’t think Cassi is hot AT ALL! Her eyes are too far appart and her nose is gross.

Cassie looks like she could pass for Tila Tequila’s sister!