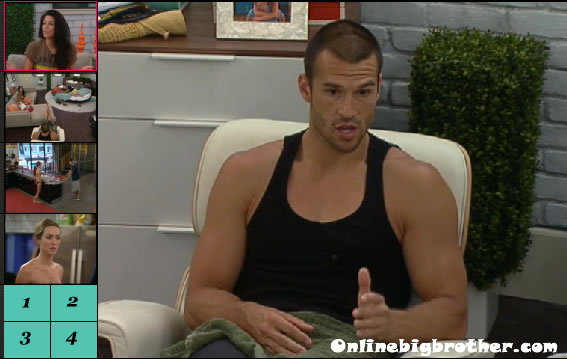 4:00pm HOH Rachel, Brendon and Dani Brendon is thinking Dom is a major threat he thinks he explains that he went to DOM to offer him an agreement and DOm told him “What are you going to do for me” brendon was taken a back from that, “He’s either incredibly stupid or doesn’t know how to play this game”. He repeats some of his conversation with DOM where he said to dom “Any one who is lucky enough to work with us has an advantage theres no advantage for us to work with you…I told him straight up”.. Dani: “Umm how is there not though” Brendon explains that the disadvantage would be that they would have a larger target on themselves. Dani : “Wait were you offering him something?”. Brendon says no. Dani reminds them that the other side has the numbers in a big way. Brendon doesn’t care because the other side is not uniform in any way. Dani understands that Brendon adds “he’s thinking right now it’s us versus them that’s how he still see’s i”. Dani schools him is that he’s probably thinking that if he comes over here then they will all hate him and they will still have the numbers. Bendon says they all see this game as us versus them. Dani Smile “Yeah that’s what it is isn’t it”. Brendon “yes but.. in 2 weeks we arent’ playing in pairs”. dani continues to explain who Brendon’s deal isn’t as good as he thinks, she adds that it would be just like her going to the otherside and bring on the bottom of the totem poll. Brendon DOm is whoooing you Rachel ohhh he is Wooing you. Dano No i’m a logical player I.. Rachle DOM”S Wooing YOU”

Brendon mentions that Kalia is someone they can trust Rachel agrees Dani doesn’t say anything she brings up porsche and how everyone in the house is sick of her but it’s good they need someone like like in the house. brendon agrees and adds that POrsche is the dumbest player out there she thinks she’s smart but she’s a complete fool.
Jordan joins them. Dani brings up Lawon and how shady he is, Brendon completely agrees adds that he’s been hearing shit from both lawon and keith. Dani mentions that Lawon cannot be trusted he’s trying to play both side. Brendon declares it’s time to call a house meeting. Dani says they need to find out who is lieing Lawon or Keith. Rachel adds that from conversation’s she’s had with Keith he’s going after lawon and kalia if he wins HOH. Rachel thinks there is a good chance they can make a deal with Keith that him and Kalia would not put up any vet for 3 weeks. 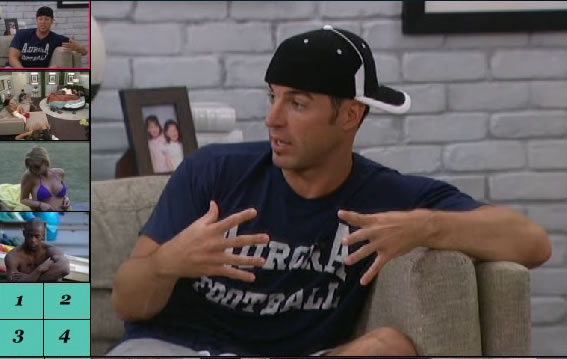 Jeff comes up. brendon rehashes his conversation with DOM and how stupid dom is for not jumping on the idea of working with them. Jeff starts pushing for them to trust Cassi and Shelly he thinks that Cassi and Dom are not as close as they all think. Brendon and Rachel call bullshit that Rachel: “You can’t say that Dom and Cassi don’t talk game there together all the time” Jeff knows that but he doesn’t think they are as reluctant to turn on each other as the other vets think. Jeff wants them to go after Keith this week then Dom next week that will give them the best odds in the long term.

Kalia briefly enters tells them some trash about Keith dating white girls.. Kalia :”Point blank I’m sick of my name coming out of Keith’s mouth.. I’ve shared 10 words with him since I’ve been here”..

After Kalai leaves they start bashing Porsche a bit, They all think she’s very weird, dani brings up that Porsche is/was friends with Janelle. This shocks them all very are surprised that Janelle was friends with her. Jeff thinks Porsche was very spoiled as a child. They mention Dick and how he’s wasn’t as bad as everyone said. Dani says they lived with Dick for 6 days don’t go saying that until you live at least longer than that. .. 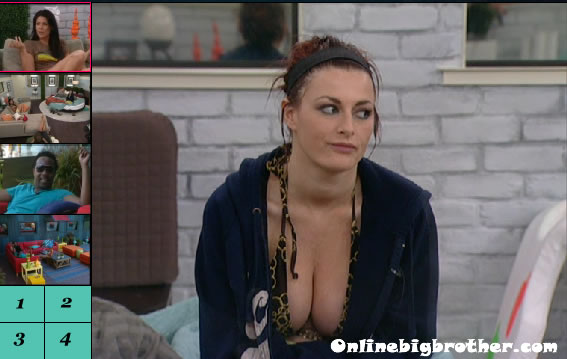 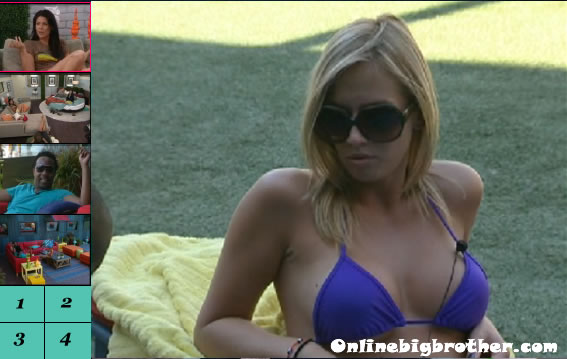 Keith’s telling her what they should do to the vets to get them to use the POV, He thinks they should offer them a deal that they will not out up jeff/jordan and Brendon/rachel until after the pairs twist is over in return rachel would use the POV on them. POrsache thinks it’s a good idea she wants to see Dom or lawon go home. Keith apologizes again to her for what he did the first day, he wants to see them both go far because he feels they both deserve to be in the game and win the money. POrsche asks him what the motivation for the vets to take the deal and put Lawon/Kalia up, Keith: “Lawon is playing both side and it’s going to come out”. Porsche tells keith she shouldn’t of told Keith to calm down yesterday because his actions were causing him to get evicted. Keith apologize again for what he did to her. Porsche is quiet for a bit. Kieth starts in on the “deal” again but she’s not interested. Keith brings up how Porsche will probably want him to leave that way she gets the golden key. … more silence. Poreche is fine with someone she doesn’t trust getting evicted and her getting awarded the golden key. and right now she doesn’t trust keith. Porsche reminds him that they are not in a romantic relationship like brendon and Rachel or Jeff/Jordan and their not trying to win so they acn afford a wedding they are playing for themselves and him going home this week is better for her then him staying. He asks her if she’ll do the deal if rachel agrees. Porsche doesn’t answer. 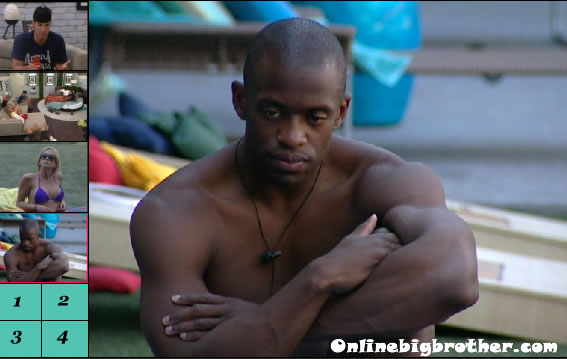 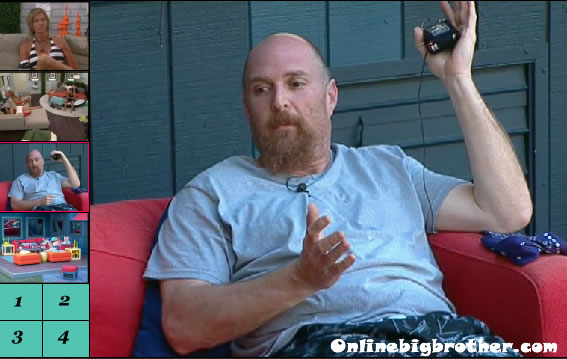 5:11pm backyard couch Keith, Adam, Porsche Keith is going on and on about his plans and wondering why Porsche won’t forgive him. Adam says if the POV is used it’ll be used to put either himslef and Dom up or Lawon and Kalia so keith should just relax a bit. Kalia joins them starts talking about what the vets are going to do. Adam thinks everyone should just chill and stop trying to read the vets minds “to try and read them right now is impossible we’ve known them for a week” Kalia is just trying to make conversation but she understands where Adam is coming from. Jeff joins them on the elliptical

I like Dom, he’s funny, and gets people talking…but I think he runs his mouth too much, and it’ll come back to bite him. Also, we need to start a Cassi petition, every minute the cam is not on here is a minute wasted.

Lawon later started crying and was comforted by Dani and Adam and later Rachel came to his aid as well. Now he is talking to Kalia trying to rebuild that relationship.

To me it looks like Keith is going crazy and is saying everything he can to stay rather it be true or not.

Brendon is annoying me with his game talk and he acts like he knows everything. Im sure that a newbie will most likely win Hoh next week, then what Brendon.

I know! He is so f*cking annoying. Listening to him and Rachel argue and confess there love for eachother every other second in the HOH is ridiculous too. I can’t wait for them to go. They think they can run the house and that they are the best players in the history of BB.

My favorite part: “Jeff and Jordan don’t argue” -Rachel, in her annoying whiny, on the verge of crying voice.. With white acne shit all over her zits.

Yea, brendon don’t know shit, he didn’t know shit last year and pretended he did, is was led around by his balls last year by Rachel and he still is, Jeff don’t know shit either he was HANDED the coup detat by BB so he could stay in the house and keep the hated HGs form continuing their domination few weeks later his cockiness got him evicted, now he pretending he’s a true vet STFU with that bullshit the only thing Jeff did was hand Jordon the wins that kept her in the game and led to her winning by the silicone in her breasts, the only true BB vets in the house is Dani and Rachel they need to work together and drop the dead weight Brendon,Jeff, and Jordon. Tired of this unearned cockiness by the most of the so-call-vets.

I wants Dani, Jeff or Adam to win it.

Brendon is such a pussy asshole! Don’t get me wrong, I dislike Rachel, but WTF! She is HOH and won POV, but he has a gag order on her. She can’t talk game without him, but he can talk game without her and claim he would never do it! As much as I hate Rachel, I agree that she would play a better game on her own. Of course Jeff would never fight with Jordan in the house, because they have a real relationship, not a made for reality tv fake relationship.

Why oh why did they have to bring Brendon and Rachel back? I think it’s to torture us fans. I cannot stand either one of them and Keith is also getting to be in that category. Keith is an idiot. That laugh of Rachel’s is like nails on a chalkboard. I really hope Brendon and Rachel are gone within the next few weeks. Dani is still her whiny way. I love Jeff and Jordan. The rest of them I am still making up my mind but so far no one stands out. The new ones are all whiny. lol

i think a jeff & jordan, brenchel, and dani alliance would be awesome. for the newbs, if dom & kieth get evicted soon, then they won’t have a leader. team vets this season!