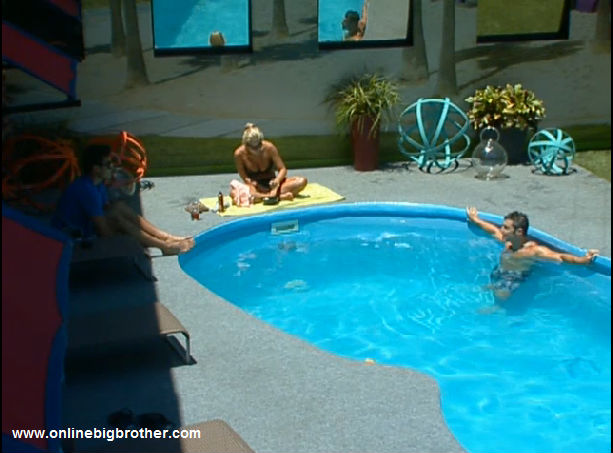 1:30pm – 1:50pm Out in the backyard, Dominic, Jordan and Jeff are talking by the pool. Jeff and Jordan are asking why Dominic doesn’t come over to their side. Dominic says because if I did that I would make enemies with more than half the house. Dominic asks Jeff and Jordan where their loyalties lie… obviously with each other but who else. Jeff says that it doesn’t matter at this point until people get broken up. Jordan says that they are watching to see who is just trying to switch to where ever the power is… Jeff says that no one has even gone home yet. You have to get to the final 8 to find out how things go. Dominic asks who’s the biggest threat from his side. Jeff says dude, there is no your side. Jeff says you need to get a grip of whats going on … you dont think that we know all your little talks and scheming. Jordan says that once you feel safe. …thats when you go home.

Brendon comes over and asks what’s going on. Dominic says talking game! Jeff asks Dominic so who would you put up if you were HOH? Dominic says I don’t know, I would figure it out then. Jeff says you need to know and you need to who you can trust because once you’re in that spot …you won’t know whos lying to you and who you can trust. Jeff says why wouldn’t you want to align with players that know the game and are strong players …you need to think long term. The new players are only thinking 1, 2 weeks ahead, while we are thinking final four. Brendon and Jeff tell Dominic …dont you think each one of them are coming up talking to us and throwing each other under the bus. Dominic says that he doesn’t trust anyone of those newbie’s. Dominic asks if they trust him. Jeff says that they don’t know yet …that this is the first 20minutes he has even talked to them …and that for them to trust him he needs to make a power move. Dominic says that his number one target was Dick.. everyone was scared of him ..Adam would suck his dick off right now if he could.. Now that dick is gone ..I don’t have a target.

Meanwhile in the bathroom, Cassi and Shelly do a dance for Lawon..

Watch the first few days of for FREE!
3 Day TRIAL!

2pm – 2:10pm Jeff tells Dominic this is the first that we have talked to you ..we arent going to shake hands and make a pact. You have to prove to us that we can trust you.. Dominic says why would I make deals ..this is week one. Dominic says that the only people he thinks are cool are them (Jeff, Jordan, Brendon) and Cassi. Brendon says that this is a very complicated game and everyone here will probably put their faith in the wrong person. Dominic says that its just easier for you guys because you already have someone that you know and trust. 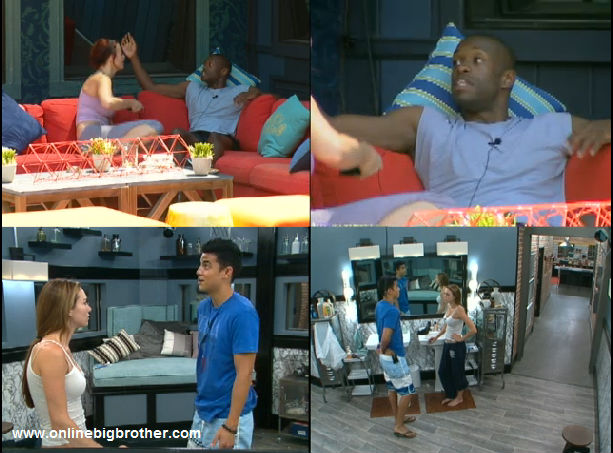 2:15pm Cassi and Dominic are in the bathroom whispering about Dominics conversation with Jeff/Brendon/Jordon. Dominic tells her that they told him there are no sides. Cassi says exactly thats what she said as well. Dominic says that it would be good if it was side side though …good for them. Dominic tells her that they want to work with him so bad. The conversation changes to talking about Keith and how he’s starting to get crazy. Dominic leaves and goes to the bedroom to talk to Dani about his conversation with Jeff/Jordan and Brendon. In the backyard Keith is explaining his reasoning for blowing up the other night to Rachel. Keith said that lies by Lawon made him look bad which made him go and say bad things about Porsche. Rachel tells Keith that she thought he and Porsche were dating from before the show. Rachel gets Keith to promise and make a deal to not put up the Brendon/Rachel, Jeff and Jordan for the next couple weeks if he wins HOH. Keith says that sincerely, my target was Daniele and Dick. Keith says absolutely I can make that deal. Rachel then threatens him and says that she’s not threatening him and says that if he ever goes back on his word the strongest players are going to come after him. And that she’s not being mean but they saw him in the banana competition and he wasn’t a very strong player. Keith says don’t worry about me I good for my word. Rachel says that she wished that Keith had come to her sooner and that she may use the POV, it’s never been done where an HOH has changed a nomination when they also won POV. Rachel then leaves and tells Jeff about the deal and asks if they can trust him. 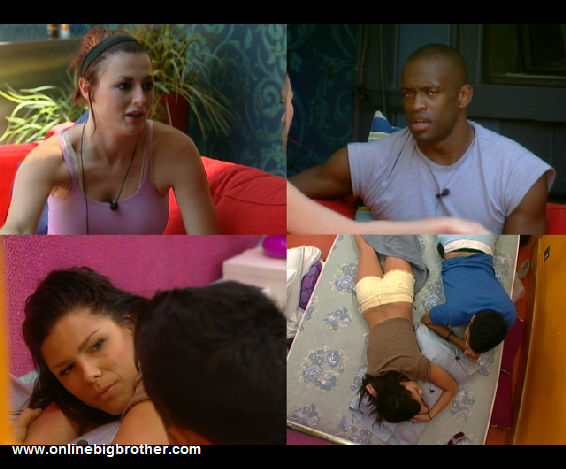 2:35pm Jeff tells Rachel about the conversation he and Brendon had with Dominic and how he got Dominic to believe that the vets side already knew everything the newbie’s side was saying. Jeff says that he and Brendon were mind BLANK Dominic and the newbie’s. Rachel says that she didn’t think Adam would be loyal to the vets side. Jeff thinks Adam would be. Jeff says that he doesn’t think they should trust Keith. Jeff says that Keith is the leader of that group …we can’t keep him around.. just tell him that you aren’t sure if you are going to use the POV or not, ..that’s just my opinion. Rachel says yeah thats a good idea. Rachel says Keith is done. Jeff says that he doesn’t understand Porsche’s thinking, being mad at Keith one minute and then laying next to him the next. They break up the conversation and leave the lounge room. 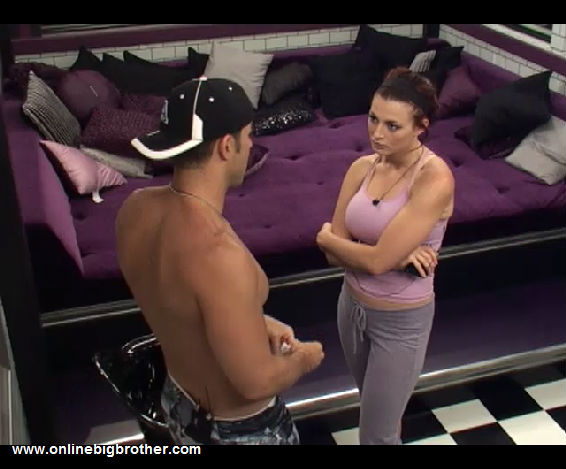 2:40pm – 2:50pm Keith grabs Jeff and asks him if he can talk to him for a bit. Jeff says yeah and they head into the lounge room. Keith confronts Jeff about hearing that Jeff had said that Keith was walking around being cool Keith. Jeff says I didnt say that ..I said that some people were walking around like their BLANK dont stink … and I said that right out in front of everyone I wasn’t saying it behind your back… that was when all that BLANK was going down with Dick and we were all in disarray. Keith says I appreciate you being honest about it. Jeff says that I didn’t even mean any disrespect to you or nothing. Keith says that he planted information about himself with Lawon about himself (Keith) not being human services… and then right after it came back around. Keith says that Lawon is a snake and cant be trusted. Jeff says to Keith that they’re Chicago guys, we gotta look out for each other…

live feeds on your Android and iOS devices.
Sign-up for the 3 Day Free Trial

Agreed. I can’t believe how dumb these newbies are. They need to quit being star-struck and play the damn game! Idiots!

I don’t want to see Adam suck anyone off for the time being so I can eat & watch this show without regurgitating everything back out.

Keith is an insult to black people. I’m black. and I don’t like him. this is such a HUUGe opportunity to be apart of this show and he stank it up acting all indignant to basically everyone the first week. what an idiot!! the only good thing he did was plant that thing to Lawon because it was so red handed when Lawon spread that planted word behind Keith’s back. But this is Big Freakin Brother, back talk is the norm. Tell us something we don’t know Keith! I’m so glad Keith is going away! bye Bye I hope I never see you again for the rest of my life! and & return your “black” card before you leave.