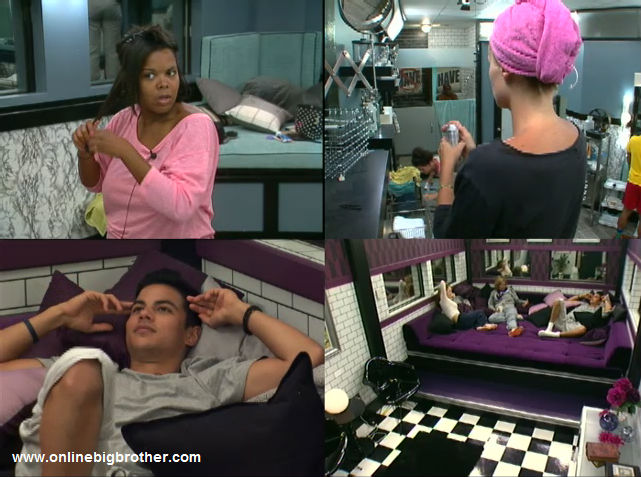 1:40pm The feeds come back from TRIVIA… Shelly and Dominic are in the lounge room talking. Dominic is complaining that Porsche ate his apple and painted it with nail polish …he says that he brought it up to the HOH room because he was hungry. Cassi says that she doesn’t know some times if she is going to wake up to Porsche standing over top of her campaigning or with a knife ready to stab her. They talk about what the vote might be tonight and what they will wear for the live show. Adam joins them. Dominic tells a story about when he was young he and some friends got in trouble for running from the cops on scooters. Cassi is putting in her hair extensions. Meanwhile, Kalia and Keith are in the bathroom getting ready while Lawon showers. 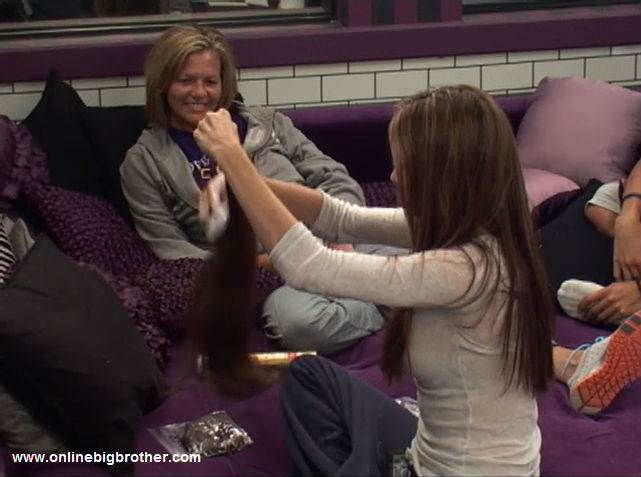 1:50pm – 2:15pm Big Brother cuts the back to the TRIVIA screen again.. After about 10 minutes the feeds come back to Cassi, Dani and Dominic in the lounge room. Dominic is talking about how he wants the hammock put back in the backyard. Dani leaves to go eat. Dominic tells Cassi that he has to be honest with her …that if he or she wins he is going to tonight. Cassi laughs. Dominic says dont get too excited if I win tonight …I dont want people to think we are working together. They both laugh. Dominic asks Cassi …who do you think drops bigger douces in the house ..me or Jeff. Cassi says she doesn’t want to hear about him dropping douces. Dominic then leaves to go to the bathroom. All the other are getting ready and eating.. 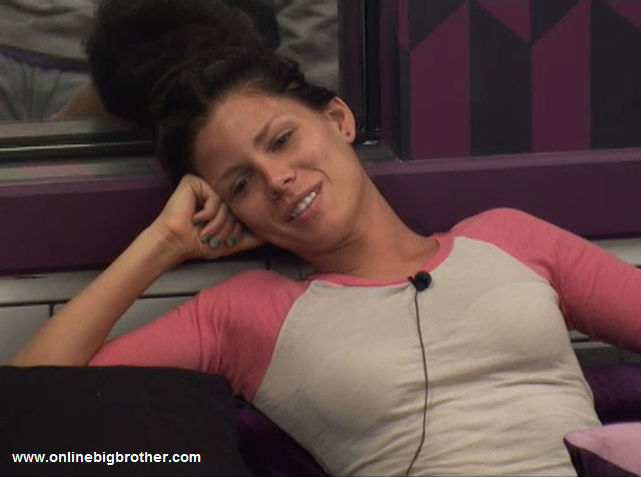 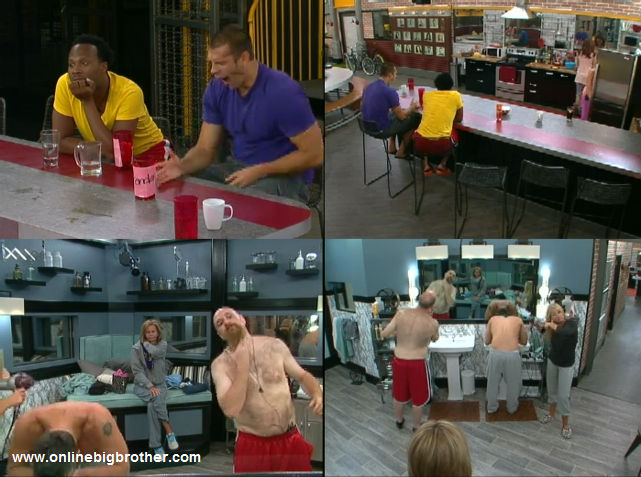 2:20pm Dominic asks what they are going to say when Julie Chen asks them questions. Dominic asks Cassi what she will say when she is asked about what she thinks about the guy she is getting close with in the house. Cassi says that she will say that its like he is replacing her brother while she is in the house. Brendon and Rachel come in to the lounge room. They talk about Rachels ring and how she will have diamonds added to it once they get married. They talk about what tattoos to get like the date of their wedding. 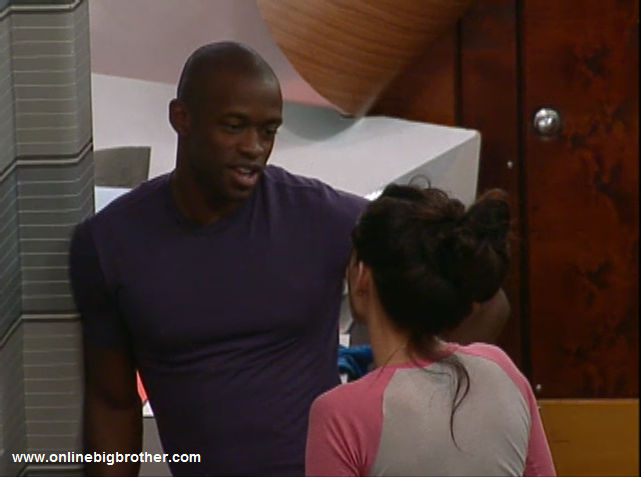 2:30pm Dani and Keith are whispering. Keith is asking for Dani’s vote. Dani tells him she doesn’t want to be the one to stick out …its too early in the game. that Dani tells Keith not to repeat this but that Big Brother usually brings someone back every third year. Dani says that it was supposed to happen last year and it didn’t. Dani says that last year Julie Chen had said something to Andrew and Matt and gave it away …and they had been holding people in sequester… Right then Big Brother cuts the to the TRIVIA screen for a few minutes. When then come back, Adam and Keith are talking about the votes and whispering. Keith is asking if he has his vote. Adam says that he has his back. Dominic comes in and Keith asks him too. Dominic says he has his back too. Dominic leaves. Keith asks Adam if they (vets) have been trying to strong arm Dominic. Adam says no. The conversation then changes to talking about what they will wear tonight. Jeff and Dominic come in and Dominic asks him what colour shirt he is going to wear? Jeff says a button down. Dominic says what colour ..a button down ..then laughs. Jeff says DUDE! Jeff and Dominic leave. Adam and Keith continue to talk. Adam talks about how he already has a big enough target on him back and he doesn’t need to make it any bigger. 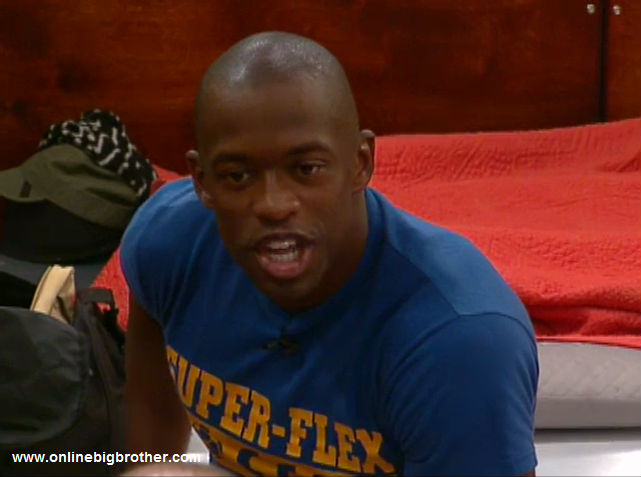 2:45pm In the candy bedroom, Jeff is trying on dress shirts for Jordan and Dominic. Dominic knocks Jeff for only buttoning up 3 out of 8 buttons. Dani comes in. They talk about how much they like one of his shirts, Dominic doesn’t like it. Jeff says we have a winner ..cuz Dom doesn’t like it. Jeff and Dominic start to get into it … Dominic goes to leave and tells Jeff to FCK a GOAT! Jeff says your always talking about FCK** goats and now your telling me too?! 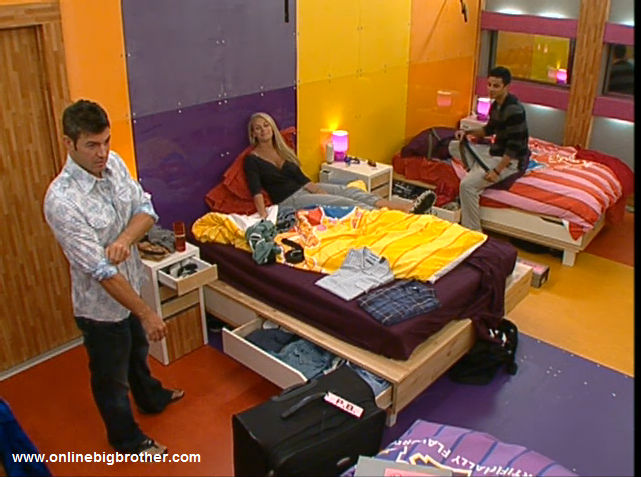 could they cut the feeds anymore ???jeez….

Allison Grodner hopes when she wakes up there will be grape trees standing over top of her.

She’s the reason why we won’t see a Bacon themed comp, she would eat the whole set, even before Adam gets to it.

Surprised the Banana comp from season 11 lasted, oh yea they are healthy.

If BB cleans up when they are on HOH lockdown, why do they let them cook in the Kitchen to dirty it back up, or do they get them food to eat like order some subs or something

Can’t wait to see who wins the HOH tonight. Then we will really see who was ass kissing the first week. C’mon, Cassi.

It seems to me that Dom wants to be Jeff or something. What are you wearing? Always joking around with Jeff. Comparing who douces better. It is wierd.

IMO, Dom’s intimidated by Jeff so he’s being extra aggressive. Like a chihuahua, yapping away.

he don’t want to be Jeff, what is Jeff nothing more than a giant disloyal douche bag, he WANTS Jeff, this season has 1 Gay Lawon and 1 closeted gay Dom

I love the Dominic/Jeff rivalry.

Guess theres not enough likeable people in the real world so they had to bring this bunch back? Truly a sad state of affairs cuz I dont like none of em, not even ED wanted to stay

I hope one of the vets win HOH and get rid of Dom. He’s a cocky a*hole.

Next week for sure but not this week, lets break up the pre-honeymoon coupes 1st, We needs DRAMA, and they are the door

Jeff is really turning into more of a turd than I knew he was.

so i havent been keeping up with after dark this season…. who is most likely going home tonight? and did they ever say why dick left ?

dick left for personal reason and Keith is going home

thank you… and i think im happy with that decision with what i have watched so far…. kieth and brenden get on my nerves… rachel doesnt seem as irritiating yet this season

Rachel doesn’t seem as irritating? It’s only been a week. It’s coming…

Just wait until she’s not the HOH.

Absolutely! And if you think Brendon is a douche now, wait until his ass is on the block! Looking forward to a Brenchel meltdown this week. Go Newbs!

Comment
what time does the live show air on the east coast?