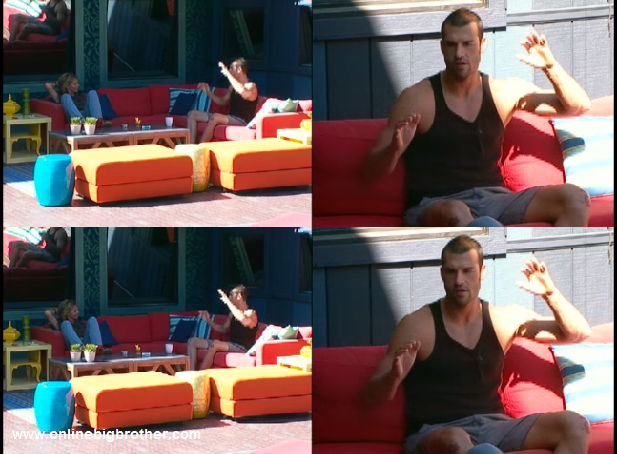 9:15am – 9:45am Big Brother switches the live feeds to the we’ll be right back screen. When the live feeds come back, Shelly and Brendon are out in the backyard talking about Kalia. Shelly says that Kalia was asking her about whether or not what she had on her leg was razor burn or not. Shelly says why are you asking me that .. thats just poor adaptive skills. Brendon complains that Kalia brags about who she knows. Shelly says that Kalia grew up privileged. They continue to complain about how Kalia gets other to cook for her and won’t clean the dishes. Brendon and Shelly start talking about movies. The conversation changes to Brendon telling Shelly remember no matter what animosity Rachel had with Cassi, it has nothing to do with you. Shelly says, thank you. Brendon says that it’s hard ..I know what it’s like to be on the other side of the coin, trust me. Shelly says yeah, but what if it’s totally flipped. Cassi comes out into the backyard and joins Brendon and Shelly on the couch. They all talk about movies.

Cassi imitates her brother when they were younger and dressed up as Freddie Cruger for Halloween. She says he was hiding behind a bed and came up with the claws and moved them across his face.

10:10am – 10:30am Brendon, Cassi, and Shelly talk about guns and teaching children about what would happen if someone got shot. Shelly says that what they did was fill up a milk carton with something red and then shoot it and tell they child that’s what will happen to anything that you shoot. Brendon heads into the kitchen. Brendon and Dani talk in the kitchen. Brendon asks Dani if there are any talks that he has missed? Dani says no …just that everyone is paranoid as hell. Dani and Brendon talk about how the house changes from minute to minute. Shelly comes in and tells Brendon that Rachel just asked the silliest question on in the backyard. Shelly says that she was talking about the hurricanes and how everyone was put on a curfew. Shelly says that Rachel had asked her how they can put adults on a curfew? Brendon, dani and Shelly laugh. They all head out into the backyard and Shelly continues to talk about the hurricanes. 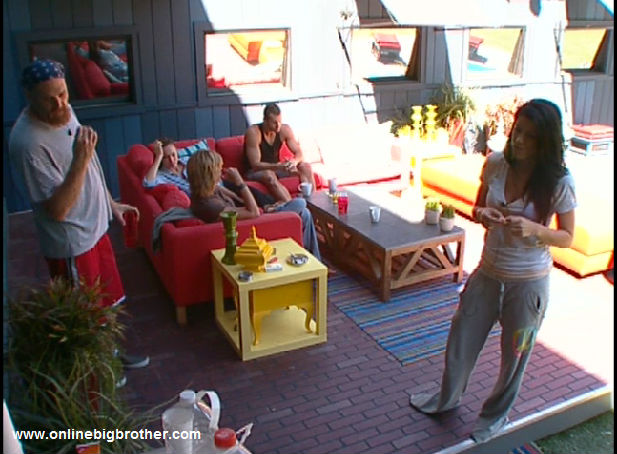 10:35am – 10:50am Dani and Adam are in the bathroom. Dani asks why the hot shower is on while Adam is in the cold shower. Adam says that it helps warm up his cold shower. Dani yells your cheating, your cheating. Dani tells Adam that the camera loves him. Adam is in the shower flexing and saying OHHHWHHHAA..LOOK AT ME I’M NAKED! Adam and Dani talk after he gets out of the shower. Dani says that she just can’t wait until this week is done and then some of the drama is gone. Adam talks about how Brendon and Rachel have more drive and they want it more. Dani says that winning competitions isn’t everything. Adam says that he needs to win HOH this week because he knows he is going up. Dani says that she will try and push for Lawon to go up… she says she likes him and all ..but no one trusts him. Adam then tells Dani that he will go into the bathroom to put on his underwear so that she doesn’t see any notty bits. Dani says EWWWWW….You’re so kind! 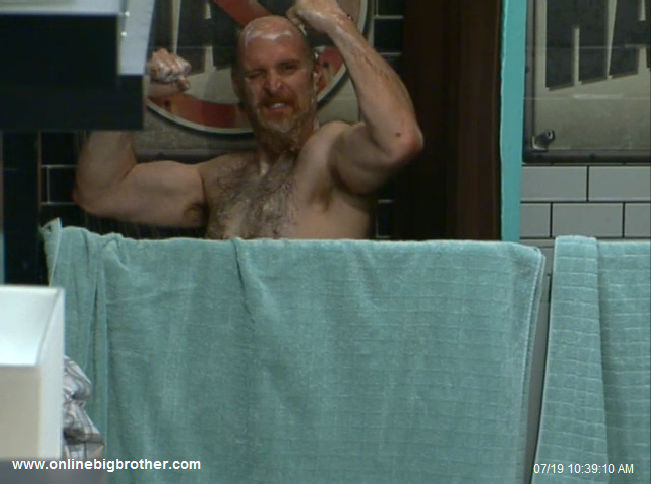 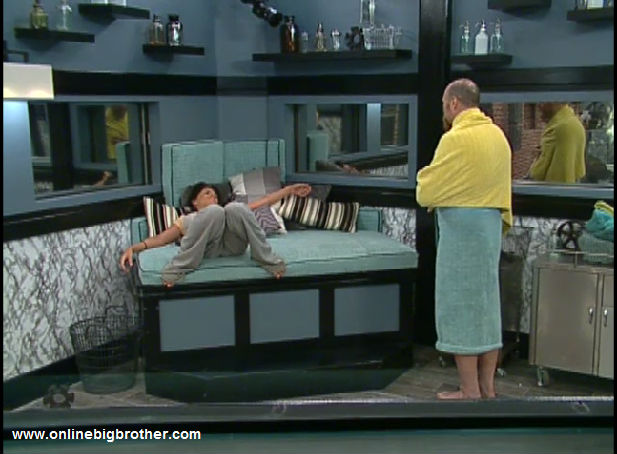 next week we should get the faces up..
Rachel = Boy George
Brendon = penis
Jeff = ? (maybe the rainbow flag)
Jordan = ? Cookie dough maybe ( not sure if this applicable for her this year)
Porsche = some type of crappy car
Dom = ?
Lawon = ?
Adam = ?
Dani = ?
Shelly = just a picture of shelly waking up in the morning is funny enough
Kalia = ?

I’m finding it a bit early .. .but what do all you guys think?

Yes Adam should be bacon.. Kalia could be Oprah.

That is an insult to Oprah. Oprah maybe big but, she is not lazy and unproductive. Also, Oprah is highly inteligent, Kalia unfortunately is not!

true.. i’m not sold on having Kalia as Oprah.

Good ones, Melissa. If not bacon, I think we should make Adam’s avatar the viking from the Capital One commercials.

Also, I say use this for Lawon:

oh yeah, that one is waaay better..haahhaaha…goes with his personality perfectly! good one!

Jeff should be dumbledore!!

for Adam one of those pictures of pigs that says Makin Bacon?

Billy Bob Thorton wering Shelley’s Hair – she’s his cousin “Shelly-Bob” or as her oyhrt cousins call her “Shish-Ka-Bob” because she’s spent to much timr in the sun! Bag Skin or “Leatherface”

Alison Grodner taped displaying her feelings about this of BB13 and the past 3 weeks!

Those are both great pics I really like the Jeff one

Check this pic out from rtvzone, I almost fell outta my chair

HAHAHAHA that first one is aweesome

QAZ gone love this one
http://i800.photobucket.com/albums/yy283/Archimedes3/BB13/LordGrodnlo.jpg

LOL where you finding all these there awesome

hhaha some of those are awesome

yup, that is what I would see if I ever thought about Jeff’s unit.. sums it up perfectly.

This the best one with Jordon in it..
http://i800.photobucket.com/albums/yy283/Archimedes3/BB13/CassieWonderlandcopy3.jpg

I read somewhere that Shelly was a cross between Geena Davis and Fire Marshall Bill from In Living Color.

that is the perfect description, so right on!!! hahahahahahahahhahaha… geena davis and fireman bill, doesn´t get any better than that!!!! hahahahhaha

Shelly reminds me of Charlize Theron in the movie Monster