10am Adam and Shelly are talking in the backyard about the votes this week. Shelly tells him that she has his back. Adam reassures Shelly that he hasn’t heard anyone say anything bad about her. Adam tells her that if one of them from their side wins, we will see if they have the balls to put up a vet. Adam and Shelly talk about how neither of them have promised Porsche their votes when she came campaigning. Meanwhile, Brendon and Rachel are having a fight in the hammock. Rachel forgot to make sure their car was registered in California and that she forgot to pay a ticket. Rachel says that she is a lot more laid back than him. Brendon says yeah thats good for a party but not for making sure we don’t get charged extra money or making sure bills are paid on time. They start to make up. Brendon tells her that he is glad she is all talk and no bite. Rachel says thank god you are easily manipulated and controlled. Brendon says WHAT?! Then a plane flies over head and he yells GET ME OUT OF HERE!!
24/7 UNCENSORED Live Feeds! FREE 3 Day TRIAL! 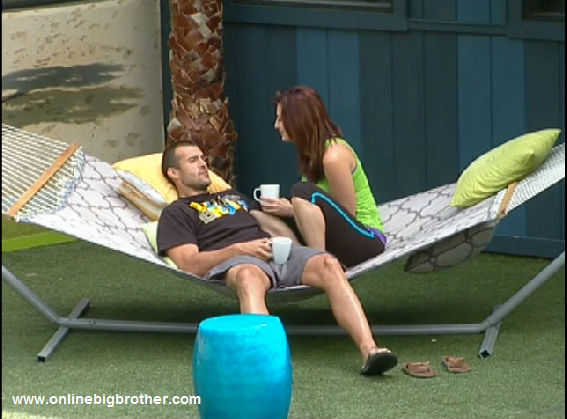 10:20am In the backyard Adam and Shelly are still talking game. They are talking about how Cassi has been asking who should go home. Shelly and Adam say that they both told her that they didn’t know. Shelly warns Adam not to say anything that could come back at him. Shelly says its best not to ruffle anyones feathers. Shelly says both Dominic and Cassi will protect each other before they protect them. They talk about their situation and how it can all change in an instant from week to week. Adam tells her he doesn’t want HOH this week. They wonder where Porsche’s loyalty will be at week 10. Adam heads inside to shower. Brendon leaves Rachel to go talk to Shelly again. Brendon tells Shelly again that they want her to tell the newbie’s that the vets are voting out Porsche and then at the last minute they will vote out Keith. Brendon says that he can’t wait to see their faces when Keith gets voted out. Shelly says okay. Brendon says that all they need is five votes. They talk about how the newbie’s are playing the game all wrong. Brendon says that he doesn’t know what they are thinking. Shelly says they are trying too hard. Brendon tells that Cassi, Dominic, and Keith are a three headed snake and they are going to cut the head off. Brendon tells Shelly that he called it about Cassi and that she should have kept her mouth shut. He says that she talks too much. They then compared her to a used car salesman. Shelly says that its all about Storm, Norm, Perform. In the beginning people are storming, then they norm …find out where they are and at week 10 you have to perform. Shelly talks about how the young’ins think they got game. She says they are gonna be shocked when whatever it is they are planning does not work. Brandon says that you have to play this game on several different levels, ..by the hour, by the day, and by the long haul, and how the next HOH is gonna determine a lot. Brendon heads inside. 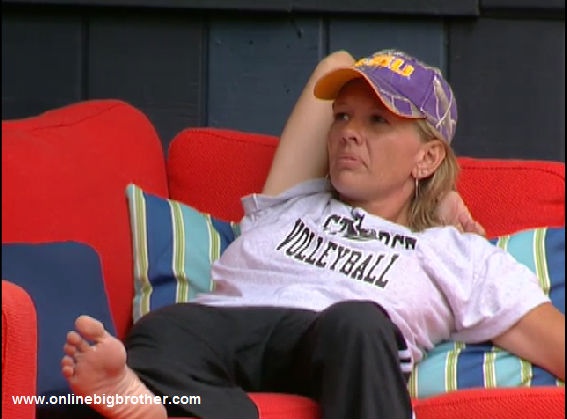 10:30am – 11am Keith heads out into the backyard to workout. Shelly asks him if he is sleepy? Keith says that he wants to stay and asks her again if he has her vote. He says that he can tell her anything. Shelly doesn’t really answer back and then changes the subject to his workout clothes and where he got them. Keith then jumps on the elliptical. Shelly helps him out with his laundry then heads inside. Brendon and Rachel are making breakfast, Shelly is getting ready for the day in the bathroom, and the other are still sleeping. Keith finishes up on the elliptical and goes inside to take a shower. They are on an indoor lockdown. Shelly comes into the kitchen and asks Brendon and Rachel how the others can sleep ALL DAY! 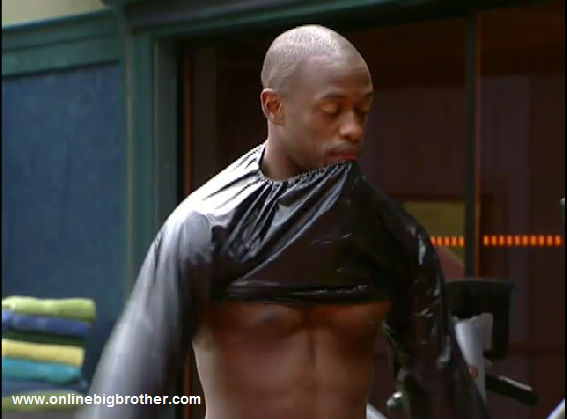 TEST out the Live Feeds for FREE SUPERPASS – 3 DAY Trial! 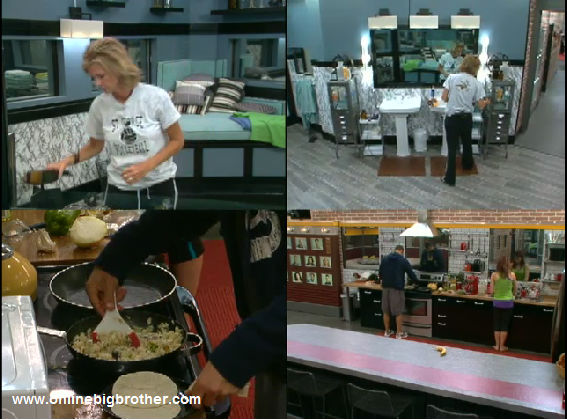 Brendumb doesn’t know that easily manipulated and controlled he is?? Did he not watch how everyone in the house that tried to get in his head got in his head?? WOW. Guess he’s never get wind that the only reason Rachel agreed to take him back and marry him after that internet cheating he did, is when he cheats on her again she will take him for all his money..

No sense in wasting a dead snake. Let Allison Grodner cook it and eat it.

I read your comment on the last post about Shelly and thought I would comment here. I firmly believe Shelly is 100% in bed with the Vets more specifcally Jeff and Jordan. In all her pre-show interviews all she talked about was how she wanted to play the game with class and show you can win with your integrity intact. The main example she kept pointing to was J&J. Also she said her favorite players ever are J&J.

So think it about this way, her main goal is to play with class and integrity and she wants to align herself with like-minded players, so when she is looking around the house deciding who to align with on one side she sees a bunch of young immature model types that she doesnt know squat about and on the other side are her role models for being on the show. To me its pretty obvious she is going to take the chance of playing with J&J since she thinks she knows them better (even if it is only from watching them on TV for a summer) and knows they are classy people where as she doesnt know anything about the noobs.

I dont think Shelly really has any chance at winning this game and I think the same for Adam (sadly) and Kahlia and Lawon bc to really do well at this game you need to find at least 1 person who has your back above everyone but themselves. B&R, and J&J already have this, I’m fairly confident Dani will get there with someone and it looks like Dom and Cassi are already close. I just dont see Shelly, Adam, Kalia or Lawon finding their true “duo” some one who will look out for them over everyone else in the game.

I agree, I think Shelly is in awe of Jeff & Jordan. She’ll go far, but probably won’t win. Having Cassi for a partner will guarantee her a gold key, at least. Next to J & J, she’s my favorite person so far.

Great analysis.. you are probably right Shelly will attach to JJ and float to the end. I just hope there’s some surprises this year would be nice to see both sides fight tooth and nail. I’m finding myself forgetting this is only week 1 ..

I love how with brendon any move to take B/R or J/J out is seen as a idiotic game move. He did the exact same thing last year.

yesterday I must of typed a doz time about him in the HOH calling “everyone down there” (the newbs) scared shitless, pack of rats, chicken shits etc etc… He said the exact same things last year about Brit and her crew. You just wait once they stop winning comps it’ll be BB12 all over again with this guy.

I started to see a bit of the old rachel come out last night when she found out that ‘ohh’ another person in the house wants to take the power couples out. I’m hoping to see some more of the old Rachel .. we need nudes this season.

For the sake of the nudes page, let’s hope that Porsche gets the golden key.

Porsche is probably our best bet for nudes this year unless Rachel goes vegas on us again. Jordan must of saw all the pictures of her naked cause she’s MEGA careful on the feeds not to show any skin..

Gotta love & respect Jordan for that! Who wants to have everyone you know watch you act like Rachel on a reality show?!

This is why I don’t get them invited the Whine couple back on BB, unless their intention was to rig the game for them to win it, since they have no social game.

That’s why I’m curious about Dani this season. She’s thinking the same thing about Brendon, so I’m wondering if she’ll have the guts to maybe try and knock out Brendon soon since she has the key and can’t be touched in retaliation for a while. The reason I think she would even consider this is because yes, I absolutely think Shelly will try to play with Jeff and Jordan, so maybe she would try to get Cassi out, then scoop up Porsche and Shelly since they’re also “untouchables” (I can even see that becoming an alliance name in the next few days). If Brendan is gone, it’s only a matter of time before Rachel destroys herself. She’s stronger than people like to admit, but even extending her life by 3-4 weeks won’t be enough, she won’t make it to the end of Brendon leaves early in the game.

Long story short, son of a bitch: it should be easy for Jordan to float to final 3 again this year. Man, she’s so undeserving of any respect. Even Survivor is having issues with floating becoming the new master strategy in the game these days. So annoying.

Simon, did one of my comments get sent to your spam pile? I thought I made a reply on this article with my Dani/Brendon/Jordan strategy thoughts.

No kidding I guess Jordan finally learned how to change properly (damn). Im so torn because I like JJ and then also cassi Dom so guess I’ll just see how it pans out. I firmly believe that dani will team up with Br before JJ so I hope JJ have a plan to get with a “newbie” soon.

Well, Brendon did get sucked in by Enzo and Hayden last year, and was convinced he was in an alliance with them. That double eviction episode was the best blindside i have ever seen. He was still convinced he was a pawn. If he has gotten any smarter, he might realize that he is making himself look bad to just about everyone when he establishes how “dominant” he is within the first two weeks.
there’s a reason dinosaurs didn’t survive those meteors while the mammals hiding in the caves did

Brendon named his alliance with enzo and hayden “the athletics” LOL .. can’t wait for the excuses coming from Brendon if they lose this week HOH.. and man Brendon’s gotta be getting on Jeff’s nerves by know.

Man, if Dom didn’t have such a big mouth, he could be this year’s version of Hayden: basically some guy who acts nice to everyone and then starts winning competitions towards the end. Too bad I think he’s gone next week if him or Cassi do not win HOH