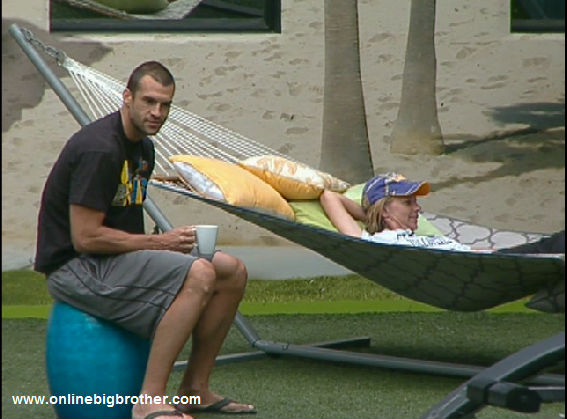 7:15am – 8:30am Shelly wakes up and goes to the kitchen to make coffee. All the other are still fast asleep. Shelly has her morning coffee, then starts cleaning. She does laundry, and then starts cleaning up the backyard. Someone in the house just farted really loud twice. Gross! Shelly is now sitting on the backyard couch having a smoke after cleaning for the last hour. After a while, Shelly then heads over to the hammock to lay down. 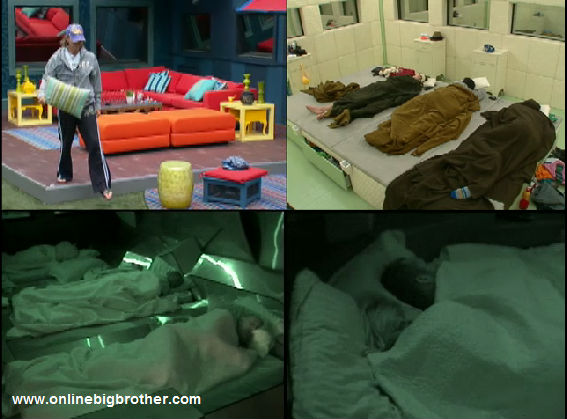 9:10am Rachel and Dani are up in the HOH bathroom talking about upcoming competitions and how the week will play out. What happens what days and when and how this week is all messed up compared to how it regularly goes. Dani says that she is going back to bed. Rachel stays in the HOH bathroom putting on her makeup. 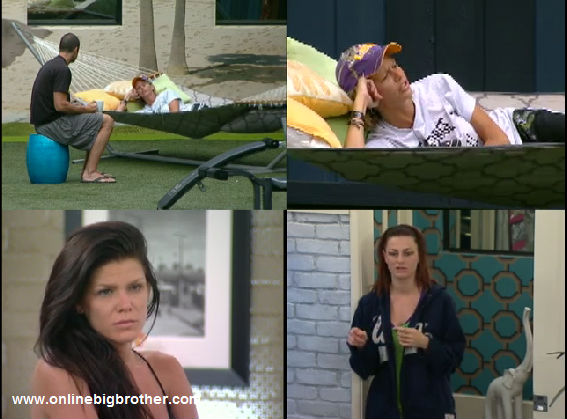 9:20am – 9:50am Shelly and Brendon are talking about Brendon and Rachels relationship. They talk about the fights they have and how they have gotten better at understanding each other. Brendon brings up his internet cheating and how it really tested their relationship. Brendon says that it would never happen again and that he regrets it. Shelly says yeah everyone has their moments of weakness and need validation. She says that your name is know around the world and they will try and exploit you. Rachel comes out to join them. Shelly start talking about her husband Tony and how similar her and her husband are to Brendon and Rachel. They talk about how Tony and Brendon are detailed orientated people and how Shelly is impulsive like Rachel . Meanwhile Adam is working out in the backyard. They talk about grocery stores like Costco, Dollar General, and others.. Rachel starts talking about their wedding registry. She talks about how her and her sister got engaged the same weekend. Brendon and Rachel talk about when they will have their wedding. They say that they don’t have any dates set yet but were thinking maybe on Brendon’s two week break at Christmas. Rachel says that they don’t have the resources right now so it would be small …maybe a destination wedding. The conversation changes to talking about the Twilight and Harry Potter movies. 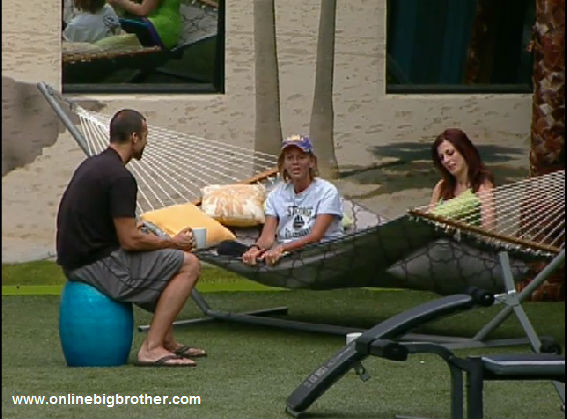 Shelly is really dumb, cassi and dom are the peolpe who can help her. Rachel and brendon are dumb too, your in the big brother house of course your going on the block at least once.

I’m hoping Shelly is just saying the shit she’s saying to protect herself incase JJ win HOH and put her and CAssi up. You’re right any of the newbs would be retarded if they think that keeping br/JJ around is a smart thing.

I can only hope that Brendon and Rachel will go early in the game, can’t stand either one of them, they both make me sick. UGH!!!!!

Can’t wait to see a repeat tantrum of last season, and Brendon would not be able to do what Dick did and not do something to get kicked out, oh wait please dumb dumb try do do what Dick did, 2 Douches out in 1 week PRICELESS.

realistically Shelly is only doing this ass kissing to Brenchel to keep her the target off her own back…Shelly probably only wants Brenchel to think she likes them…let’s face it…she doing the same old playing both sides trick and trying not to get caught strategy which could be smart because the newbies need her for the numbers…so she won’t be a target to them and if Brenchel trusts her too…then she basically covered her own ass for at least a few weeks…at this rate, i don’t think she is planning to win competitions because she doesn’t want to be the one to put Brenchel on the block…Dominic & Cassi are running their mouths and are pretty much already in trouble…shame….because i like them…on the contrary, i’m liking Rachel this season…she seems to be playing differently then she did last season…not playing a personal game and instead playing more strategy…however, i am still not liking Brendon

Shelly is turning out to be just like the big-eyed lazy blonde last year named Kathy. And we all know how that worked out for her. Being house mother and confidante only gets you so far before both sides realize how expendable you are.

Jeff and Jordan (who from this day forward I will call Sookie from ‘True Blood’) really have no game either. This is why I am having a hard time watching. Sookie (Jordan) did absolutely nothing to win that year and Jeff,is equally as brainless.

Rachel and Brendan are the ones I despise the most. It boggles my mind, that they feel ENTITLED to dominating the game and actually expect all the new guys to roll over and let them win. I’m still trying to figure out why the new guys (Adam,Shelly, and even the Porsche) are sucking up to Brendan and Rachel, they have only as much power as you grant them you idiots.

And Let’s not forget Danielle, aka Trailer Park Barbie. She spends most of her time sneering at everybody or standing at the kitchen stove cooking. I can’t wait until she gets tossed. When ED left, she should’ve been giving a back-up option as a partner, not given the Golden Key. Yet she whines about that!

Please let Brenchel go on the block or get backdoored next week!