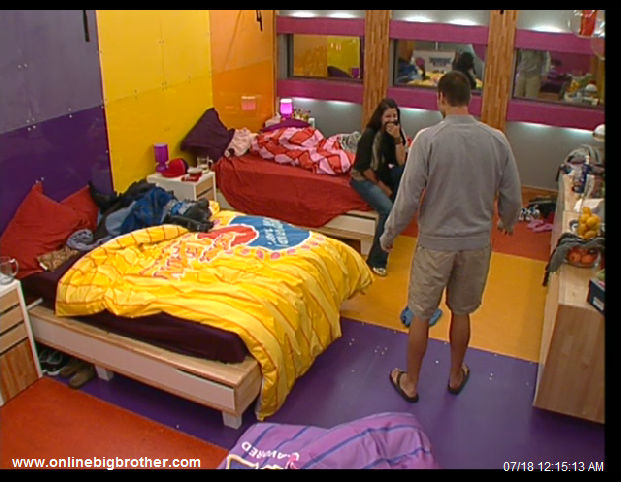 12:15am Jeff and Brendon find the dirty pair of underwear in the candy room. Earlier Jeff and Dani put chocolate in the boxers to trick everyone. Brendon says that he thinks the underwear is Dominic’s because he said that he was having stomach issues. Brendon then brings Dani into the room to show her the dirty drawers. Dani laughs and then asks how do you not know you left that in there?!! Brendon says that he doesn’t want to call him out on it in front of everybody. They decide to put the dirty underwear in the HaveNot room next to Dominic’s bed. Not long after Cassi finds the underwear and confronts Dominic. Cassi didn’t know it was a prank. All the houseguests that knew it was a prank were laughing. 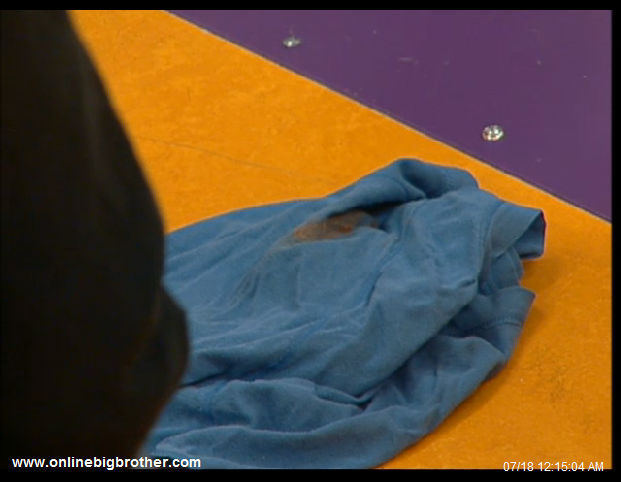 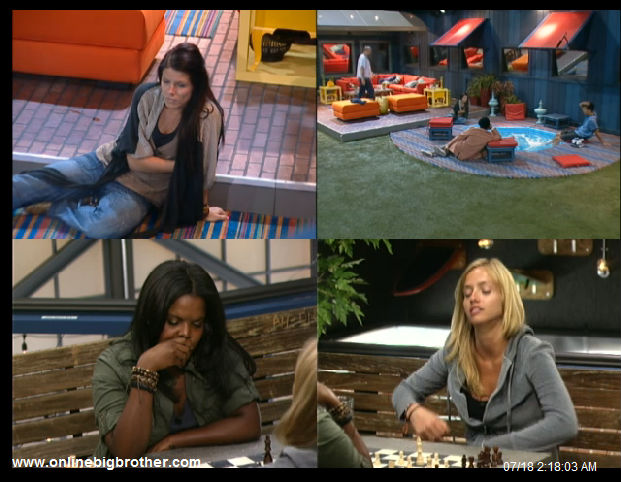 2:50am Jordan and Jeff are still up in the HOH room talking. Jeff says that Cassi is really working them to keep her. Jeff tells Jordan that Cassi needs to go and keeping her would be a dumb move. Jordan says that putting up Kalia and Lawon, with Lawon going, would be a stupid move. Jordan says Dani in the final four would also make her nervous. They talk about how they couldn’t trust Dani because she is working both sides. Jeff points out that Dani is in the best position in the house. Jeff says that it would be the dumbest move in Big Brother history if Dominic lets Cassi talk him out of using the veto. Jordan and Jeff are laughing at how pissed Rachel was when she was playing pool with Cassi. Jeff says Rachel’s emotions are making him nervous. Jordan says she felt bad when Rachel cried in front of her because she talked about Rachel in the diary room. Jordan laughs and says that if Dick was there he would be stirring it up and Jeff says he would love it. 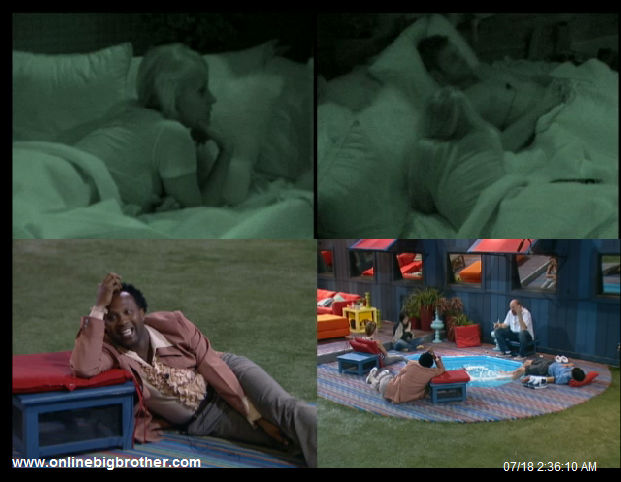 3am In the kitchen Dominic and Cassi are talking. Cassi tells Dominic that she talked to Jeff about back dooring Brendon and Rachel. Dominic tries to explain to Cassi that wouldn’t happen. Dominic counts the votes if he didn’t use the veto, but says that realistically he couldn’t count on those votes after the lies from last week about the votes for Keith. Dominic tries to get Cassi to campaign against Shelly. Cassi says that she won’t campaign against Shelly. Dominic tries to get her to agree to have him campaign for her. Dominic says that he doesn’t want Cassi to regret not campaigning later. Dominic says that at least she would made two new friends after, and she joked Shelly and Adam. Dominic says that he would miss Cassi and not to cry in front of him because he would cry too and he doesn’t want America to see him cry. They leave the kitchen and go to the hot tub. Dominic tries to explain to Cassi that it was not just personal issues or Cassi getting in a fight with Porsche why she might be evicted. Cassi says that Jordan said the girls in her alliance wanted Cassi out. And that Dani had said it wasn’t petty girl stuff on her part, which Cassi took to confirm that it was petty reasons. Dominic says that personal issues and fights may have something to do with it, but the main reason was that Cassi was a strong competitor, compared to the other remaining newbies. 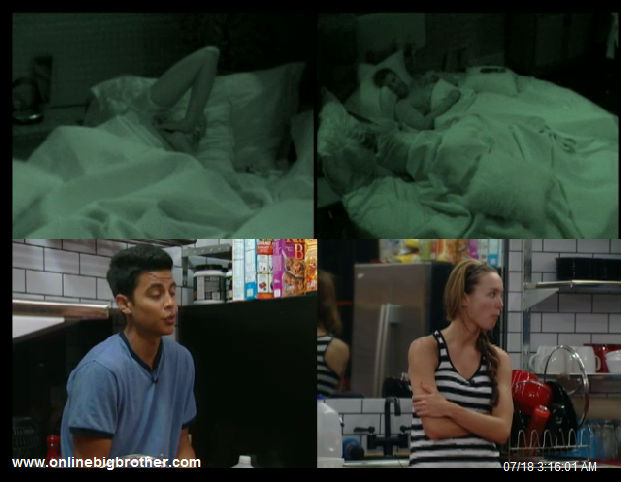 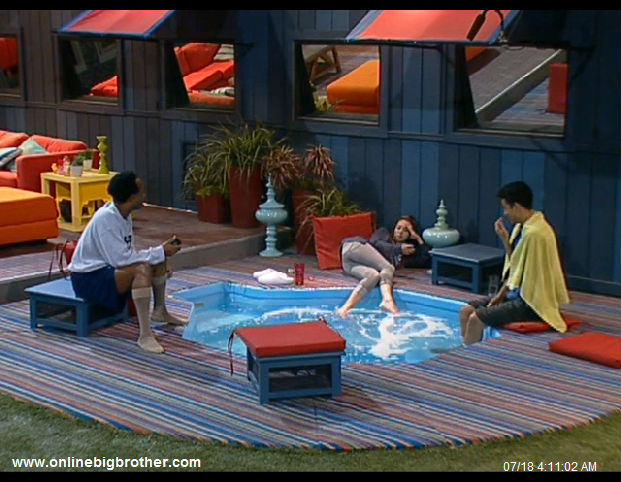 TRY the out the Live Feeds for FREE SUPERPASS – 3 DAY Trial! 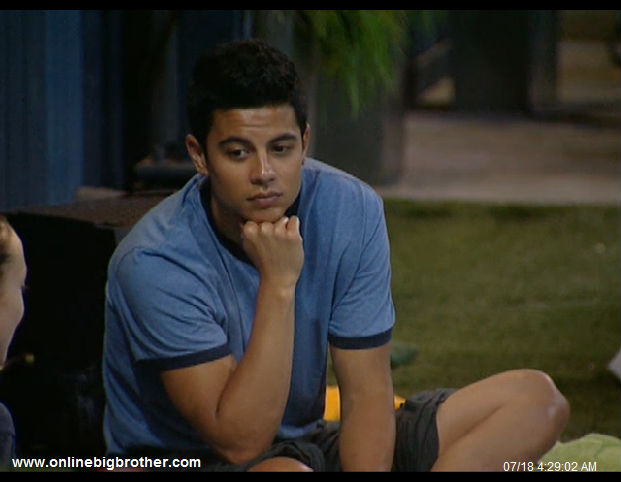 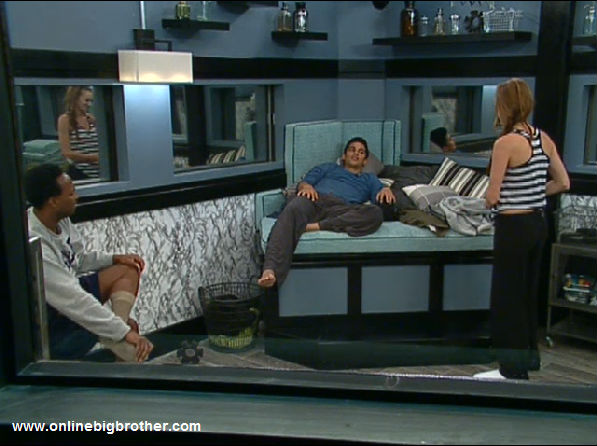 4:40am Dominic tells Cassie not to blow up during the Power of Veto ceremony. Cassi says that she won’t. Dominic asks her if she will blow up when she is leaving. Cassi says she hopes Rachel doesn’t try and hug her while she’s leaving. Dominic tells Cassi that he better be the last person she hugs before she exits. Cassi says that she wants to say to Rachel just as she walks out the door ..try coming back for a season 3 because she knows Rachel was coming back in the hope of changing America’s opinion of her and she wants to insinuate that she hasn’t changed at all. They talk about whether or not there is an America’s Player this season. Dominic says that he doesn’t think they would do that this year because there have already been so many twists. They talk about the possibility of Keith’s twin coming back in Keith’s place. Cassi says that’s creepy! Cassi tells them that if she got to come back in the house she would rock the house! Cassi says you never know, Big Brother. Dominic says that one thing is for sure, this eviction is going to be an emotional one. Lawon comments that doing his goodbye to her will be emotional. Dominic starts talking about Keith and says that Keith was so mad at him end towards the end. Dominic says that Keith is an idiot. Cassi talks about how Keith told her not to trust Dominic or Lawon. Cassi wonders how Keith even got on Big Brother. Lawon says that Keith has been on at least two other reality shows before coming on Big Brother. Dominic says good riddance! Cassi says that it is so embarrassing to be the person to go home right after Keith.
24/7 UNCENSORED Big Brother 13 Live Feeds!
FREE 3 Day TRIAL! 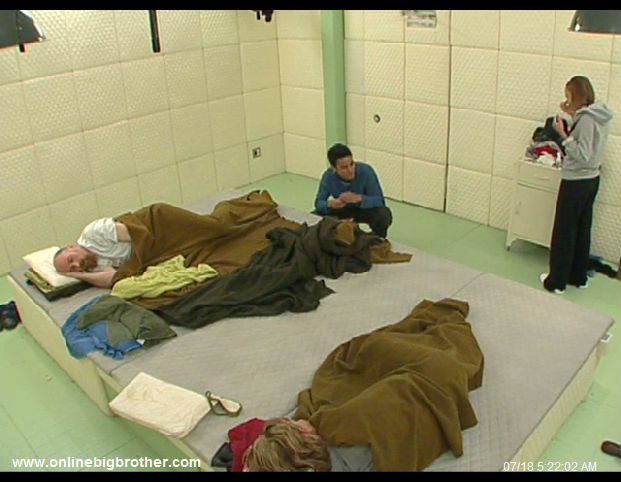 6am All the houseguests are still sleeping..

I’m not sure if this has been discussed before, but, I don’t think the Jeff will win America’s favorite player this year if GLAAD has anything to do with it. GLAAD is really upset over Jeff’s anti gay tirade the other night. CBS say that they are not responsible. See link: http://www.care2.com/causes/glaad-cbs-clash-over-big-brother-housemates-anti-gay-tirade.html

Can you say freedom of speech. That was Jeff’s Opinion. I don’t see how its a big deal. There is movies out there that bashes gays.

GLAAD will get upset if anyone says anything remotly different to what they believe in…. How about this one GLAAD….. I am straight, but I do not have an annual parade to demonstrate to everyone that I am Straight….. Why should we be subjected to it? GLAAD is nothing but a group of people who will look for drama anywhere they can…. Kinda reminds me of R/B

I can understand J/J’s position. They would love to keep Cassi but you have to keep the biggest targets in the house in B/R. I don’t know why Kalia/Lawon aren’t really an option tho?! Kalia’s been so far up Jordan’s ass, it’s sick. At least Cassi is trying now. She was just nice to look at before and was just kinda there. But let’s see if she can swing something. Doubtful tho.

in that case, why can’t shelly go home? i would rather they keep cassi and send shelly packing

Cos Shelley is planning on sticking with J/J as far as she can. Who know? I might even see a final 3 deal with them. The problem here is Dani & Brenchel know they HAVE to get rid of J/J quick. Cos there is no chance anyone will give them money over J/J simply cos ppl like them. Same goes for Shelley. The jury will give her money over anyone else. Let’s see what happens today. Maybe Cassi can pull something off and get B/R (doubtful but oh so wonderful) or get Kalia/Lawon put up. If I were Cassi, I would go to talk to J/J with Dom and come to an agreement to keep J/J safe or at least till B/R are gone.

I was a hope that maybe JJ would put up BR but we all know better. Cassie is gonna leave but I hope there is a twist that brings her back. Because we all know the dairy room is gonna swash that thought of putting up BR they casted Br for a reason and I really doubt that they will allow BR to be back doored because BR is thier so called stars this season I fully believe that some of this show is rigged for high drama

How about sequester Cassi after Thurs and bring her back in a Pandora’s Rachel’s box?

That would be awesome! But I think bb has a mad crush on b&r and would not do anything to hurt their game.

I agree completely. It bugs me so much that Cbs think b/r are good tv. Clearly they don’t care what we think. I haven’t come across one person who loves them. Highly disappointed if Cbs Is going to go out of their way to keep b/r

I dun think they have a “crush” on B/R. They’re just good tv simply cos everyone hates them. You want to tune in to see their demise. Drama = ratings. As long as they have villains in the house or very polarizing figures, there’s always going to be something to moan, BLANK or cheer about depending on who you like. I think they hoped Evel would have tore Brenchel a new one this season…that would have been priceless really. But he had to leave which threw a spanner in the works. But judging from what’s been happening with Cassi this week. I wouldn’t be surprised if she somehow returned in some fashion if vote out this wk. Someone here suggested Pandora’s box. But I wouldn’t be surprised if this “couple” thing doesn’t completely end week 10 but remain in some weird fashion.

im pretty sure that CBS guaranteed the returning guests at least the first few weeks in the house or they wouldnt have agreed to return. I keep hoping that RAGAN will return somehow and that would completely freak Rachel OUT!

Ragan and Rachel are friends now…

Which makes absolutly no sence lol

I don’t understand why they (HG’s) don’t want Rachel to cause DRAMA, but they keep saying they would love it if Dick was there causing DRAMA. Why do they care if she makes the target bigger on herself that’s what they should want. It’s the only reason to keep her in the house as most HG’s have stated.
I don’t love Rachel, but I don’t want her to be like Jordan or Dani either. I expect her to bring the CRAZY thats the only thing I like about her on the show. I wish they would evict Brendon first then Rachel will be free and pissed to do whatever she wants. I don’t think anyone would be telling Dick to calm down.

For someone who says that they don’t like drama did anyone else notice that this whole argument between Rachel and Cassi was created by Jordan and the things she said to Cassi about Rachel? Just saying