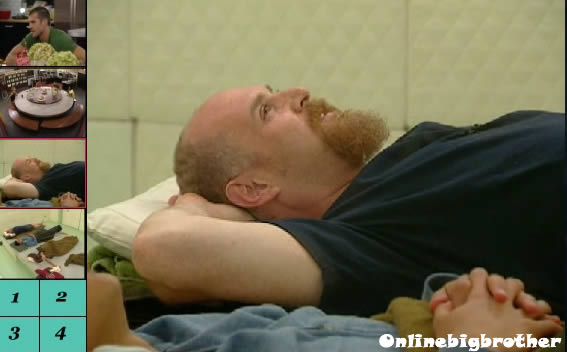 6:00pm Havenots Dom and Cassi They are going over the Veto Comp and how nervous they all were. Dom says that when he’s nervous he sways from side to side. Cassi noticed him doing that. Dom tells her he’s glad he won he’s sure he would of gone home if he hadn’t. He tells cassi he wants to see her fight if she gets put up. Adam joins them, dom tells them he thinks he got pink eye in the comp. Adam says for him to stop being a “Nancy”. Dom explains that you get pink eye from going to the the strippers and them rubbing their bum holes all over the place, that’s why I don’t condone strippers I think women or anyone should do that.. “Now prostitution that’s a different story” They all laugh,. 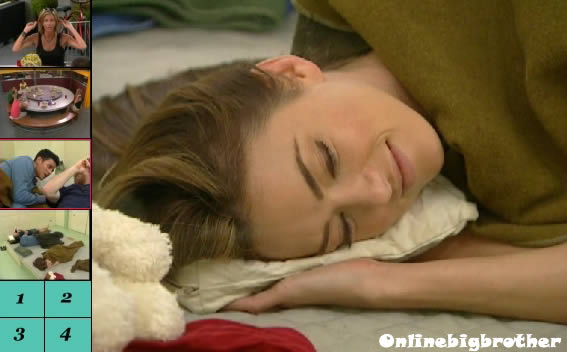 Truth or truth
Dom asks Adam about sleeping with a girl if they are dating. Adam tells them if he was “dating” a girl and didn’t know if she was dating him “Exclusively” he would not sleep with her. Dom is a little surprised with his answer.. Adam says its the difference between being in your 20’s and 30′, “in your 20’s if it moves and it’s willing Do it”
Adam asks Cassi, After how many dates if a guy does not make a move on you do you start to quesiton if he likes you ? Dom: “Ohh good questions”. Cassi says she would not judge what a guy thinks of her by the physical attention he would give her, that’s becuase she knows a lot of guys would be respectful of her. Dom pipes up says the dame thing happened to him, the girl said “Qre you gay and just want a friend” Dom starts staring at Cassi arm pit.. cassi tells him to stop, he says it’s tough with that chia pet growing under there. Cassi: “I’m have nots the water is cold” Dom says he’s not a fan of holding hands when your’re not moving. Dom prefers “Hooking” this is when you hook arms with each other and you have your hands in your pocket. Cassi hates it when people kiss her on the first date, she wants to be courted she doesn’t need to kiss a guy before she even gets to know him. Adam leaves Dom starts playing with cassi’s hair and they keep talking about relationships. 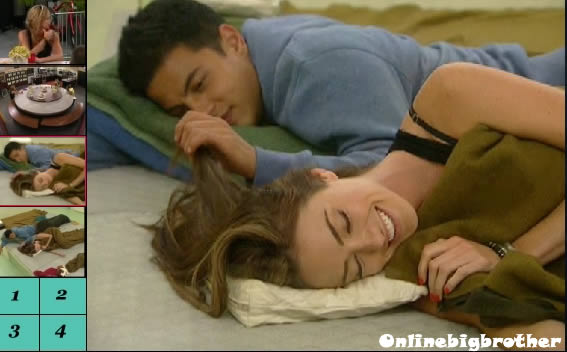 lawon asks him if he kisses on the first date.. Lawon: “Ohh of course I do.. no no it really depends.. I don’t pick up at the clubs though I just go to have fun”.. Shelly and Adam joins them they start talkign about SNL and kissing on the first date.

Lawon says he doesn’t like seeing girls get drunk and run around screaming.. Shelly: “Do girls really go out seeking action?” DOm: “Ohh ya”

Dom tells them a story about this TA that had an Italian Accent who was very elegant and beautiful, She had a very professional, old school and sophisticated look about her but after he asked her out she told him no your to young, “She told me She’s a graduate student and he is a baby”. Dom continues that he spent the entire semester getting help for the course from her but they never talked about the course only about life. Dom says his problem is he likes older more mature people but he looks really young so it’s hard for him to find people. Shelly agress mentions that Dom does act mature for his age. Kalia walks in looking like death asking Cassi if this razor was hers… Cassi says no.. Kalia just stands there listening in on the conversation. 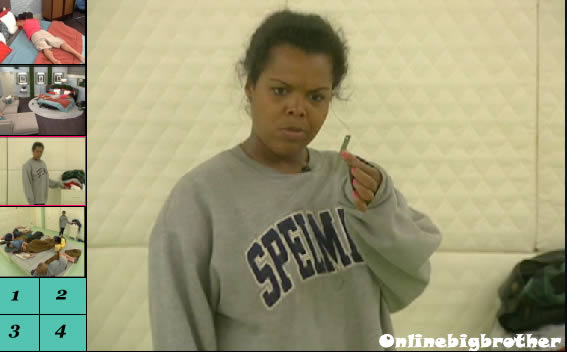 6:57pm Kalia leaves Lawon, Adam, Shelly, Dom and Cassi talking about how they cannot wait to get back outside. 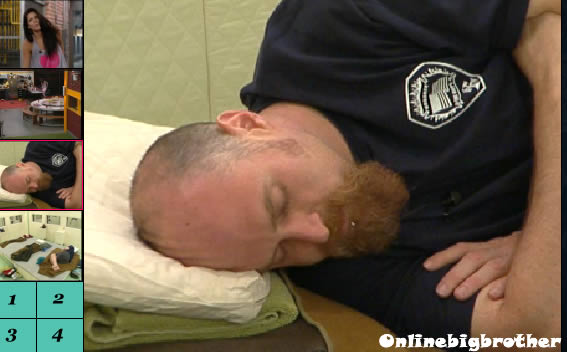 7:18pm Adam Sleeping alone in have nots (Adam, You’re OBB’s Number 1 get rest you are the only hope we have “Donna Martin Graduates” ) 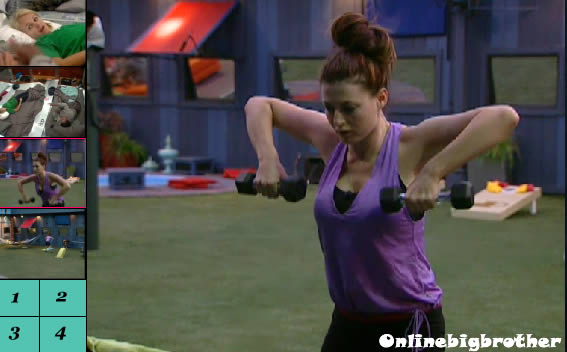 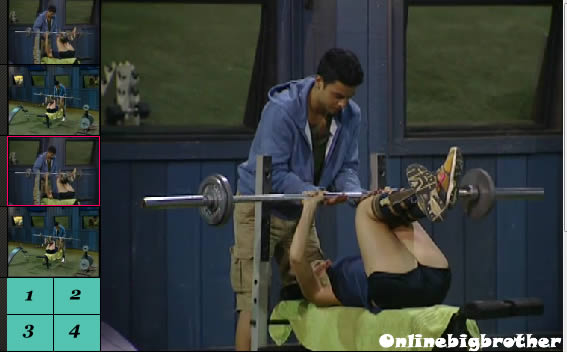 8:41pm Dani Dom working out, cassi in the hot tub, Rachel and Brendon lingering around. (All 4 cams )
We have a new Image Gallery here’s how it works, Every minute we take a screen capture from all 4 cameras inside the Big Brother house then we dump them into a Daily Screen capture post. Voila a ton of Live feed Screen captures all time and Cam Stamped Live Feed Image Gallery

Tonight’s going to be great on the feeds.. Will JJ flip the house or will they stick with the Status Quo. Either way the repeat alliance is split just not sure when the first shot will be fired.

Despicable Me
Reply to  Simon

Anonymous
Reply to  Despicable Me

Thank you. I was just wondering that myself.

Hey Simon, what would happen if one of the nom wanted to use the pov and the other one didn’t? Could the pov be split? That would really suck if you had the power to save yourself and you couldn’t do it because your partner didn’t want to use it.

Simon
Reply to  chick from louisiana

Yeah I didn’t think of that.. not sure what would happen.

You’re right both couples have to agree not sure how it would play out in practice.

Wish I could steal a plane, tie a banner to it that reads, “Jordon, put up Brenchel, you’ll have the house, THINK you dumb bimbo,nobody like Brenchel…. Allison! No more food for you, we give the have nots their food back”

Wish I could steal a plane, tie a banner to it that reads, “Jordon, put up Brenchel, you’ll have the house, THINK you dumb bimbo,nobody like Brenchel…. P.S Allison! No more food for you, we give the have nots their food back”

Simon/Dawg, Curious to know if Dani is catching on to the shifting alliances or not? Is she really up Brenchels butt or is she following her own plan so strongly that she can see the sands shifting???

I think she would be shocked if JJ flips this week..

Somebody should tease Adam with a strip of bacon, and sit back and wtch him turn into a real life Baconator. LOL

My thoughts exactly, Despicable Me.

Simon? Where is the cookies on this site?, tired of typing my name in every time I wanna post

As much as I hate Brenchel, I have to say I hate Kalia more. She is neither entertaining nor competitive. I don’t even know what she’s there for besides bitching about all the other houseguests behind their backs. The sooner she goes the better.

Hope there is a blow up between Brenchel and JJ to get them to do what’s right and put them up, , the house will vote out brenchel and some of themw ill team up with JJ because of this

J/J/Shelly/Dom/Adam/Cassi/Lawon/ Vs Brenda Or Rachel/Kalia/Yugo …. Dani would have no choice but to join the House

I would LOVE to see Jordan put up Breda and bitchy… get her out of the house and keep Brenda… he plays better without her. already tired of her whining..she acts as if the house owes her and she needs to run the show.. I dont think she and Brenda will be getting married.. not seeing what I have this last week… Jordan doesnt like rachel.. so is time to take out the trash.. I can see the ugliness now if She does put them up… get some drama going… racehl is not going to help Jordan through the game.. she will kick them out asap…

Well i hope they stock them w/ enough BOOZE tonite we all know Rachael gets drunk and stupid and talks to much. I think thats all thats needed to get the fireworks going #fingerscrossed

Was Rachel put on slop as a punishment? What did she do? I read somewhere that she was given slop as punishment for something

Despicable Me
Reply to  chick from louisiana

No she picked a “2 week slop” card or something

Despicable Me
Reply to  chick from louisiana

Is Porsche poor? she wears the same pink outfit everyday…

Wait id din;t mean poor, I mean is that all Porsche has to wear??

Rachel outing like a child….. Eat that Slop and LOVE bitch, you earned it.

dan has the best position in the house she has both sides of the alliances . she goes to jeff with news dom with news and rachel she could make it far

I can’t believe Rachel doesn’t have the decency to use a fork with getting the pickles out of the jar. That’s pretty nasty! Hate to know where her hands have been. SN: I PRAY that Jordan does the right thing and gets B/R out!

Lol, I was thinking the same thing while watching BBAD. Small things like that is one reason why I couldn’t be confined in the house with strangers.

did Dominic find out that Adam voted for Keith? I would love for C and D to find out about Shell

why does everyone hate rachel and brendon :| like almost every comment on this website has something bad to say about them. and than theres a couple that are supporting them. i don’t nessecarly like them, but you gotta be honest.. brendon and rachel are actually REALLY good competitors. like last season rachel won 2 HOH’s, and brendon won 1 along with 3 vetos. than this season they already won 1 HOH, and 1 veto. compared to the rest of these people, their the only people who are actually PLAYING THE GAME. just not the social game.

I dont get the hate for Band R either. I mean, Rachel is annoying as heck, but a bad person? no…does she deserve comments about blood and periods etc, no….

as for brendon, hes actually a nice enough guy, hes just a total emotional wreck much like rachel, I dont see how that makes him a BAD person.

for that reason I dont root against them. They do really well in challenges, almost insanely well, but their prob lem is that they cant keep ANYONE in an alliance happy.

I wondered how long JJ and BR would be able to stay together in order to knock out newbies and take majority(must be a week longer without dick) but noooooooo…by WEEK TWO, they turn. its stupid on all counts.

I would totally partner with B and R, Id say we should rarely talk, but have each other’s backs…why? Rachel votes emotionally…period. she noms the same way too