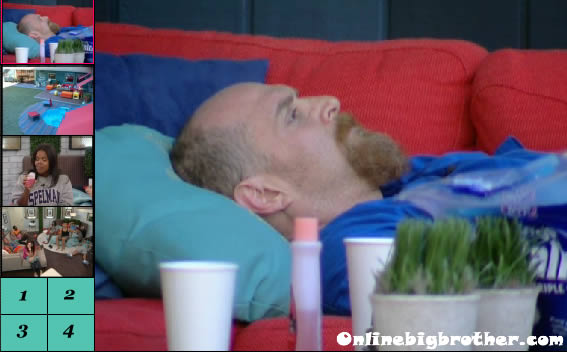 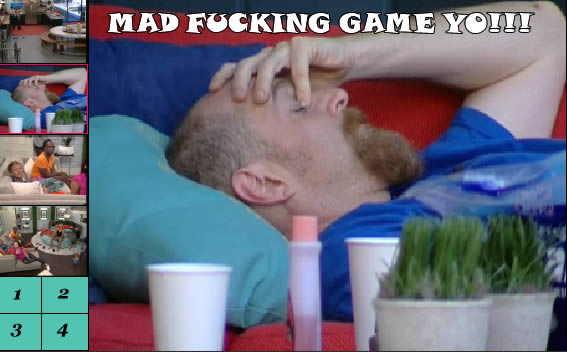 4:50pm The Big Prank on Adam After messing around with the memory wall keys and placing tape on Adam’s picture the hosueguests race upstairs to hide in the HOH. Dom turned the lights off in the havenots bedroom so that production yelled “Bedroom Lights Must Remain ON!” Dom races back up to the HOH room. This wakes Adam up he stumbles into the kitchen and notices tape on his memory wall picture. He heads outside for a smoke then beings to fall asleep on the couch Production yells at him “Sleeping is only permitted in the bedrooms” He continues the lay there using his mental powers to figure out how to win the game this season.. (He’s got mad BLANK game you just wait Adam’s going to be the first super fan to win big brother) 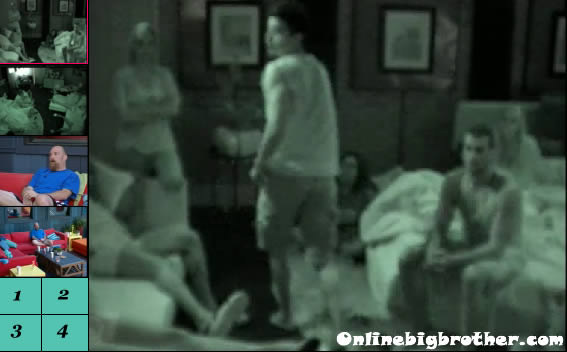 5:40pm Everyone but Adam in the HOH being a dumbass 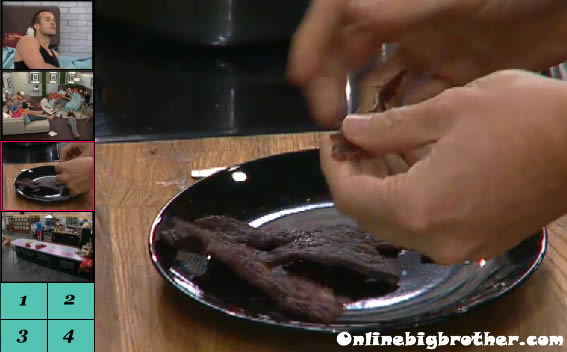 5:50pm Kitchen Adam He’s smiling to himself having found the kettle on the stove with the boiling water. Adam probably knows something is up so he proceeds to make himself a delicious plate of Beef Jerky (He’s probably happy to be left alone, and seriously how is having to eat only beef jerky a bad thing he’s probably in HOG HEAVEN right now) 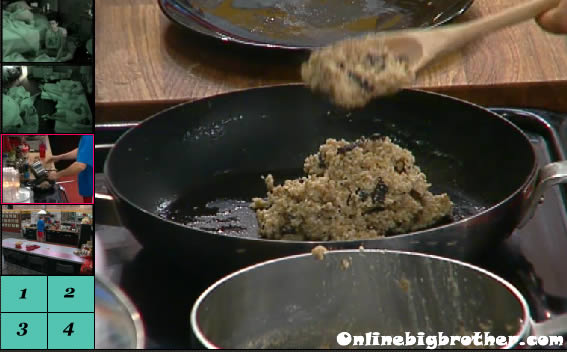 6:05pm Kitchen Adam still making slop food with everyone hiding in the HOH with the lights out. (Nows the perfect time to toss some mad grenades in the HOH) . 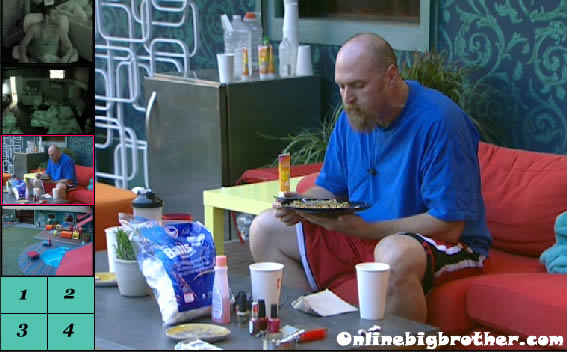 6:20pm Adam eating his slop food.. while the rest of the house sits up in the HOH douching out (Most of them are sleeping.. actually from what I can see only BRendon and rachel are awake looking at the HOH cam.. them seem like the only ones interested in this retarded prank) 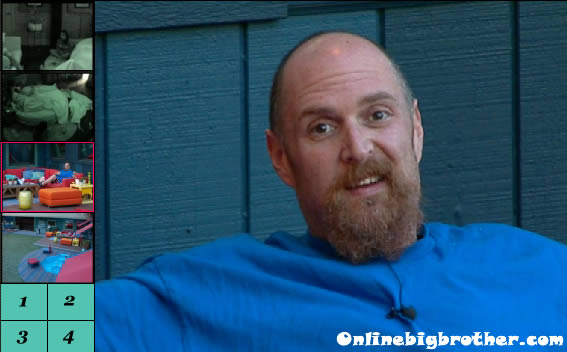 6:36pm Backyard Adam knows they are all hiding in the HOH room and he’s never been happier. He talks to the camera
Adam: “The jokes on them they want to play hide and seek.. I’m actually loving it after all the drama and all the BLANK and moaning to have one day of quiet is great… as the numbers start to dwindle thei is a preview of what it’s going to be like… AHHHHH jokes on yo BLANK….. What a beautiful night in the BIG BROTHER HOUSE” (TEAM ADAM whose with me?)

6:40pm Shelly is the first to come out meets Adam in the backyard Adam tells her that its a great day in the BB house he has piece and quiet. Shelly pretends she has no idea what is going on. Asks him how it feels to be coming off the block. Adam says it’s bittersweet…. he knew he wasn’t the target this week so putting to people up in harms way it kinda sucks. Adam is pretty sure that Shelly is safe, She agrees but they never know for sure. Adam: “If it’s a 8 to 1 vote that one vote to Shelly will be from him… Even if it means he goes home”.. Cassi is the next out.. out comes everyone else.

lol i think adams alright but his “KISS” moments are annoying

in the pic above is that poop in a frying pan? gross and adam best player ever why?

just having fun with a stupid prank

How stupid was everyone hiding in the HOH room? Adam doesn’t care you’re gone. This prank failed!!

Dani and Shelly are playing a great social game. They are totally flying under the radar. That being said, I’d love to see what would happen of Lawon or Khalia won HOH.

Seeing as this will ony happen in their dreams, but ill play along LOL Ummm i think they would do whatever their side tells them Kalia would follow Queen Bitch(Rachel’s) orders just like Jordumb did and Lawon would follow whatever Dom tells him, so either way Vets win.

BR are the only retards interested in the idiotic prank? No surprise there.

I wanna taste that slop, doesn’t look to bad. Looks like oatmeal, yummy. That prank was bad, come on think of something better people. things won’t be boring if you think of stuff. It’s true it’s true >:)

Shelly is really getting on my nerve. All the house guests are praising her, even Cassi won’t campaign against her. If the newbies only knew that Shelly is one of the two that bailed on them from the first voting session. I hope this comes out when the pairs are separated, her days in the house would be numbered!

Wow. This early on and they are beginning to crack enough to play stupid pranks. Boredom abounds.

Is it me or does Cassie look like Olivia Wilde. In face I haven’t seen Olivia Wilde in the news the past couple of weeks,
Makes sense Cassie needs to get out of the house by Friday to attend the opening of Cowboys and Aliens???
I’m just saying……….

She really does. Like a perfect mix between Olivia Wilde and Keira Knightley.

whose oliva wilde ? cassi looks like the girl that married prince william

shes does but olivia is a lil hotter :)

Yeah that’s something you learn in jail…lol

Okay you are all hard on RACHEL this year…she is annoying with her mouth and needs to stop the whining, but the girl knew cassi was the mastermind of setting up the newbies….its not jealousy cuz portia is HOTTER….i just think rachel is UNDERRATED as a player, only hope is she cools down to get less enemies…

How is porche hotter than Cassie? Get some Kleenex and clean your glasses.

lol, why is dawg one of the choices on the poll

I really don’t want either Shelly or Cassi to go. Adam’s making me laugh and that slop looked GOOD! Mad points for that one.

Adam just gets it. Everyone else seems to be trying to out think everyone else and they talk too much.