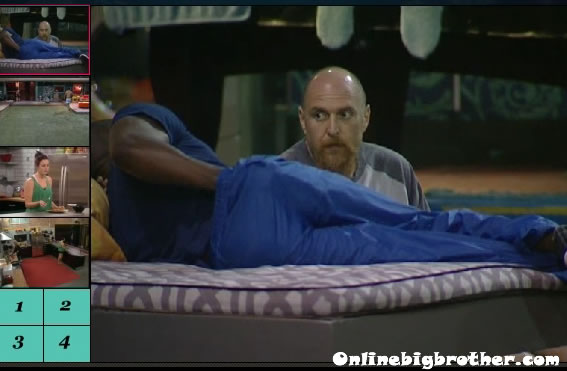 9:25pm Bedroom Rachel and Dani Dani warns Rachel that Adam is a bigger threat to them because he’s the type of player that will target a popular vet because to him being the guy to say I took Jeff out is like winning . Rachel says she’ll keep her eye on Adam. Dani thinks Adam will float by and get into the jury house.

Follow @BigBspoilers and @Dawgsbigbrother on Twitter for recent crazed out spoilers. There is also a Facebook page.
9:35pm Backyard Keith and Adam Keith thinks Cassi and Dom have cut a deal with the vet because they seem to be the only ones not stressing about being put up and Dom and Cassi spend so much time together.. . AdamL: “Could be right… could be paranoia” Keith asks Adam what he thinks.. Adam isn’t sure he says it’s definitely something he’ll think about. In all the conversations he’s had with Dom he wouldn’t think that Dom would turn on him but he’ll never be certain. Adam tells Keith that he should just relax and see what happens at the POV ceremony. Adam: “You know Shelly and I have been saying that Dom and Cassi have been awfully chummy… I told Dom to be careful because because in this game couples get targeted” (Keith can’t understand Adam speaking adam has to repeat a lot) > Adam suggests Keith starts keeping it chill, just like what adam told him in the morning when Keith wanted to go off.
Adam: “all you are doing is making your target bigger”
Keith: “uh”… Adam: “all you are doing is making your target bigger”..
Keith: “Say what”..
Adam: “all you are doing is making your target bigger” ..
Keith: “On who?”
Adam: “No all you did is make the target on you bigger” Keith: “What how?”
Adam: “By causing Drama in the house” Keith: “But I’m trying to save myself”
(Seriously that is how it went down) 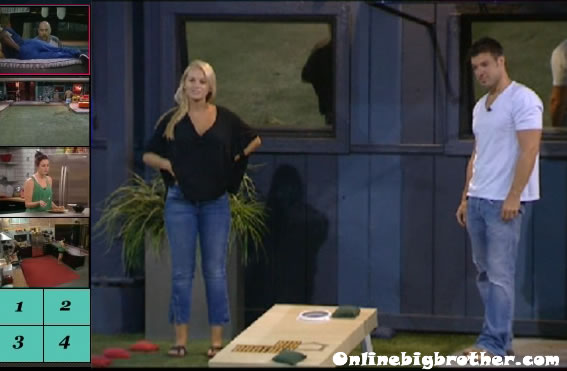 9:40pm Houseguests get a bean bag toss from production it could possibly practice for a comp.

10:00pm Bedroom Dom and Keith Keith confronts Dom tells him that since day one Doms been playing him. Keith says he’s figured it all out Dom and Cassi are with the vets, “It’s nothing personal.. You got me me ..” Dom: “I’m 100% with you i’m your boy” Keith: “You playing me…” dom says he’s voting Porsche out on thursday he’s sticking with keith. Keith disagrees tells dome that he’s voting to evict him, “you ain’t voting to keep me man… you good.. you made a deal with them.. you played me”. Keith tells him he blames himself for believing Dom since day one but Dom played him. Dom denies it “you can blame me all you want but i’ve always been with you.. why would I go against you” Dom walks away says Keith needs to chill and stop being so paranoid. Cassi enters the room as Dom leaves, Keith tells her That Dom played him. Cassi says he’s getting paranoid why does he think they have a deal with Brendon, she asks him if it’s because they were spending some time together today. Keith says no he figured it out “I’m going home I know that now.. I got played” Casii: “I think you’re going to be surprised come Thursday. Cassi leaves to get Adam returns start to smooth things over with Keith telling him that they have the numbers why would they go with Brendon and rachel. Keith correct him says that the vets have the numbers. Dom tells him no they don’t, he adds that he can’t stand POrsche she changed his mattress day one he wants her out…. 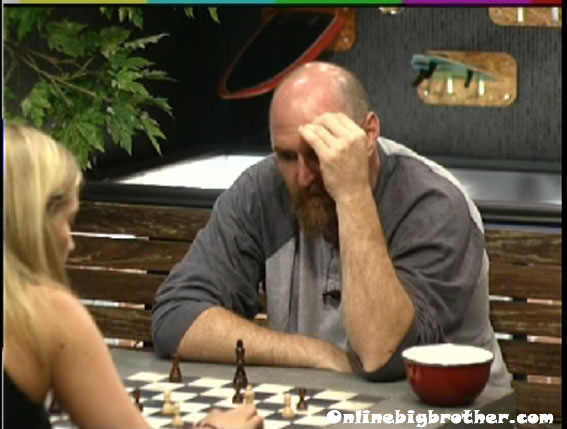 10:10pm Chess Adam and Porsche Adam is giving Porsche a run down of the conversation he had with Keith. He explains that he told Keith that by going after lawon today was making the target bigger on him and giving them another “BLANK wedge” between the noobs. He was telling Keith to shut the BLANK up and wait until after the POV is played. Porsche tells Adam about the deal Keith wanted to make with Brendon and Rachel. Porsche says she told him why do I want to play this game with someone I know I can’t trust I would rather have you talk BLANK and go crazy then I get a gold key and am safe for 3 weeks. 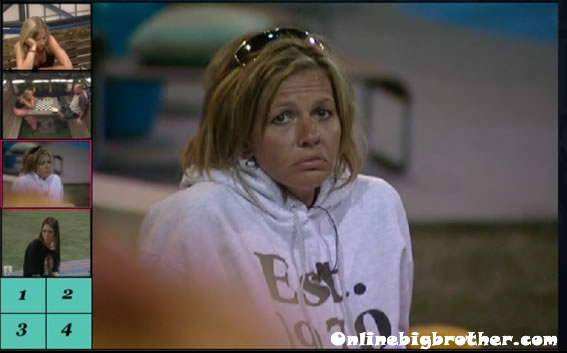 10:38pm Backyard Hottub Cassi and Shelly Cassi gives Shelly a update about Keith freaking out in the bedroom. She thinks Keith’s paranoia is getting out of control. Shelly tells CAssi a bit about her family Cassi shares a bit to.. they bond

this is not about what is going on in the house at all.. but I was just wondering did Jeff quit smoking. I remember during his season he was always lighting one up..so just curious if any one knows..

I think he did quit.. have seen him smoke once yet. there’s a lot of smokers in this bunch to

Never mind, I just saw him light one up one BBAD (at least I think it was him, they only showed his torso. But it was someone wearing a blue(ish) shirt and jeans, so I think that was him. Too bad, I was hoping he had quit, at least it APPEARS he has cut back..LOL
P.S. Does any one besides myself get a “gay vibe” from Adam. Maybe he just has feminine attributes, oh well..LOL

Yeah I think it was him.. He’s really reduced his smoking from bb11

ADAM IS REAL STRANGE. SERIAL KILLER STRANGE.
JEFF AND JORD WERE ON AMAZING RACE. HE ALSO WENT ON A ROUND THE WORLD TRIP FOR CBS AM SHOW. DIDNT SEE HIM SMOKE. ( (HIM,THEY SEEM TO BE CBS FAVORITES.)

damn that kalia can TALK!!

This is the most I have seen her speak since BBAD started..I was beginning to wonder if she ever spoke..now it seems she can’t stop talking..LMAO

Keith is driving me crazy. What’s with the sports moves he does in the mirrors all the time? Simon, using the live feeds through the iPad. A few kinks, but otherwise good! Thanks for another year!

Kalia is talking now cause she finally pooped!

Keith quit scratchin yo arse man lol ewww. never good when people do that. even if brendon did that just not good. That freakin blue fortune teller is so Telemundo! mucho!

He seems to do this alot…At first I thought maybe it was the battery pack bothering him but I have watched the live feeds for days now and he seems to KEEP his hand in the back of his pants digging at something…..so very nasty…..his paranoia and butt scratching are really taking over his game….It would be my guess that he will be the one sent packing…..

Keith is disgusting!! He sickens me and I hope his ass is out the door on Thursday!

They need to keep Keith and get rid of porsche because he is a bigger physical threat to take out the vets. Since the newbs have number they just need to all stick together until every vet is gone