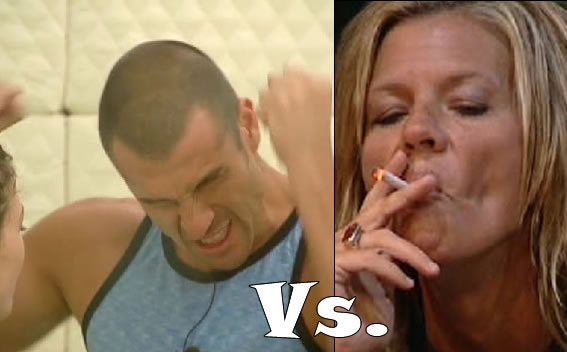 Catch the Drama after the CBS live show ends Tonight, watch it all LIVE on the feeds. Click here for your: FREE 3 Day TRIAL

My prediction is Brendon gets evicted and Porsche wins HOH

*Please note during the Thursday live show the site will be running in lean mode. Only this post will be view able and no comments will be processed. Once traffic goes back to normal I’ll turn it all back on and we can rock out the discussion.

7:07pm Feeds just about to come back

7:11pm Jeff has a lead but still everyones game..

7:15pm Appears Jeff and Jordan are in the lead followed by POrsche and Rachel. Kalia was in last place but it noe looks like Adam is.
7:17pm – Dani tellign Kalia to move faster.. momentsafter Jrodan tells Shelly to pick up the pace

7:20pm everyone still has a chance

7:23pm Very hard to see but it appears to be a 4 way race between Kalia, POrsche, Jeff and Shelly. Rachel and Adam falling behind

8:01pm Jeff is probabaly going to win this one unless he trips..

8:05pm unless JEff Falls he has this HOH
8:12pm Jeff well in the lead, Shelly Porsche and Rachel battle for Second.
8:20pm Feeds on trivia I’ll be shocked if Jeff doesn’t win HOH

Check out the Big Brother 13 Polls

About the LIVE shows, why do they start at 9 instead of 8 and is the whole show LIVE or just the last 10 minutes?

ILL WILL
Reply to  R.J

It’s on at 9pm eastern live 6pm pacific time. This is done do to uncontrollable lighting know as the sun. If you’ve noticed in past seasons sometimes the live HOH was hardly bearable because of it. Now, through proper blocking and adding a screen that can be retracted they have minimized that pesky ‘ol fireball in the sky.

Ps, Dani is so hot when she puts on reading glasses. Rrrrrawr!

Believe the whole show is live….

On another note, not a Jordon hater nor lover, but did anyone see her face when she was playing “Simon Says” last night? OMG I was dying, she looked like a 4 year old she was so enraptured with the game….flashback on it if you can, it’s hilarious!

With taped footage injected, of course.

I was watching BBAD last week and she was sitting by the hot tub eating corn and I’ve never seen her concentrate so much.

My eviction fantasy, it is a tie and BB says they both must go.
Then Rachel wins HOH just to keep the week exciting.

Brendan gets evicted and Rachel wins HOH. The Big Brother twist is that HoH gets to nominate 3 people for eviction and two get to go home. That would be quite the twist.

You got it half right. Brendon gets the boot and Rachel gets the HOH keys.

The show is live but they show snippets of what happened during the week, but yes it’s live. Ask the network about the times I have no clue, probably because of other tv shows.

Will today’s HOH be a physical or endurance?

Tori
Reply to  Jordan is hot

It looks like physical. They did endurance two weeks ago.

I think it’ll be a short physical comp

I imagine they start at 9 because where they are it’s 6, and if it were to start at 8 for us it would be 5 there which is a little early. The house guests are sitting at the couches for the whole hour, and we see the votes, discussion, and HOH live, but at the start of the show we see flash backs from after the veto ceremony to the live show.

We don’t see it live on the West Coast. It is on a 8pm or 9pm PST- depending on your cable service.

I’m not sure about the whole show, but eviction is live, and I think the HOH competition is too.

I disagreed! Probably Jeff will win HOH and put Porsche and Kaila on the block and backdoor Dani.

The Talking to julie, voting and hoh are live, the beginning is not

Okay, I am tried of Daniele winning. Some one else needs to win. The Jig(Gig) is up Daniele. Smiles. By Brendon aka Zombie. Striaght Shooter wins hands down on Striaght Shooting SH!t.

Zombie aka Vetern vs Striaght Shooter aka Newby aka Floater…..

I’d stick it in her bum

ILL WILL
Reply to  Name

Make cinnamon buns, leave a layer of glaze. She’s pretty cute if you like the blank stair look.

Simon, who do you predict wins HoH? I’m going with Rachel.

Nevermind. You picked Porsche; I didn’t see that there at first.

I was going with Porsche but I’m having second thoughts now.. it’s either Rachel or POrsche

The Chain-Smoking Liar VS The Wimp

Neanderthal vs Straight Shooter yo. Gotta love it.

Neanderthal vs Straight Shooter YO!

where can u watch the east coast feed online? dont want to wait an extra 3 hours

thank u simon, always on top of the game u are

link doesnt work??? u sure that is correct?

o see u added “big” in there the first time, thank u very much :)

Dear god. I hope ur wrong about Porsche!!! What a horrible week that would be with her in power!

Is there definatley a twist told tonight?? I predict shelly or Jeff win hoh!!! Get Porsche and kalia out!!!

Yipppeeee Jeff is the new HOH. To all the JJ haters……suck it!!!!

I can not stand Jeff he is sooooo Big headed this time and Angry like a girl as if he is God of the game.. Please first of all your girlfriend has won nothing!!!!!!!!!! HOH was given to her. Weakness is her game and acting like a girl is Jeff… cry me a river……

That’s okay JJ and his stupid follows better be scared because you know my girl Dani is going to win to stay in the game…… Because weak jordan and rachel and adam (and jj talk about all the time he is stupid blind and crazy) and lieing shelly can not win if we paid them… Ha!!!!!!

Well I was hoping Porsche! But Eh whatcha gonna do lol.
Dani, hope you’re ready to play hard in that veto!! It’s the only way you’re staying :(

Jeff winning is a blessing and a curse for him. He’s safe this week but with the double eviction he has to rely on his alliance and might be backdoored.

Jeff won. So he will put dani and kalia up. Dani can play pov automatically so it’s smart to just put her on the block so if she does win she can’t take kalia off. Porsche will go up and kalia will be voted out. Since it’s double eviction I think dani or Rachel will win hoh. Jordan and jeff will go up. Jeff wins veto and shelly goes up. Jordan will leave during the double eviction. So my prediction is after next week our final 6 will be drpsaj.

Jeff wins – shit! Small consolation is that the bitch (R) didn’t win. Dani had better win PoV this week cause ya know she’s going up. If the stars aline however, R will get the boot and, she and B can soil the sheets in the jury house.

Wohooo! Way to go Jeff! Put Kalia da hut up and get her out!

If double eviction is next week , does this mean Jeff can stilll play in the next HOH???

not in the first Hoh, but the second one he can

Sucks seeing Jeff leave, it will be sweet if jordon wins, the rest of them are all back stabbers