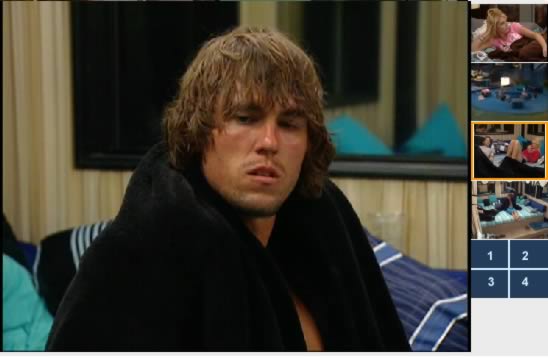 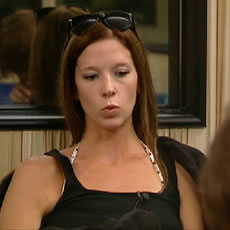 This Live Feed Update outlines Annie finally figuring out that she is going home this week. Hayden is starting to get worried that Brendon is going to target him the following week. Hayden believes that BRendon has a good shot of winning the Head of Household because of his physical and mental abilities. Ragan continues if moaning about how boring the house is.

11:45pm Cabana Boy Room Hayden and Annie. She is denying being in an alliance with Brendon and Rachel. He says that the houseguests are saying she’s making alliance with everyone. She says she hasn’t done that, she’s been friendly with everyone and talks to everyone because that is how the game is played. Annie is getting defensive she says she never expected the game to start so quickly she thought there would be more time to get to know people. Annie wants to know who has been talking about her in the house. Hayden dances around the question. Annie suspects it to be Brit. Hayden says that Brenden is now going to target him because he put him up on the block. Annie says she’s talked to Brendon and is friendly but she’s not in an alliance with him. She tells him she’s loyal an can be trusted she won’t put him up only when their at the end of the game. He tells her she has has some time to change some peoples minds.

Midnight Storage Room Hayden and Lane. Hayden tells Lane that he thinks Annie should be kept because she will be loyal to them and Rachel won’t be. They both agree to start working on Enzo to get him to change his mind and keep Annie in.

They get a bit of alcohol and begin to drink outside around the hot tub.. chit chatting 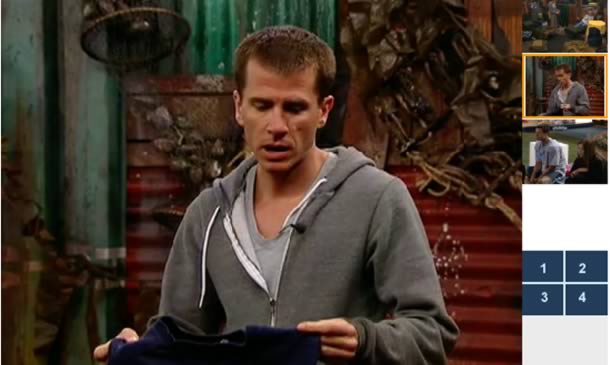 12:52am garbage Room Ragan and Kathy, Ragan is going on about how exhausting the entire big brother experience is. He wishes people would be more goofy and stop talking game so much. Kathy starts talking game (HAHAHHA) she tells him that Rachel and Brendon are a very powerful group. She points out how different rachel has been now that Brendon won the POV. Ragan tells her even though he has no idea about whats going on in this game he thinks she shouldn’t worry about it too much. kathy says she’s never been around so much child like drama before and not be able to say ENOUGH!! “its like they’re all running around playing these little games”. Ragan tells her he’s tired and has no clue what is going one it changes every hour.. Kathy correct him ” it changes every 5 minutes”. Brit walks in and act like she has no clue about whats going on in the house. She asks them if they know and Kathy spills her theories about the super group Rachel and Brendon. Brit tells her the sob story about how she was almost put up on the block and how andrew is telling everyone that she’s the saboteur…

One last thing – Andrew should be thrown off the show for indecent or offensive sexul behavior. What he did, twice, to Annie is a punishable offense. It is also a form of sexual harassment. If Annie were as “smart” as she thinks she is, she should have him booted. That guy “just ain’t right in the head”. He needs a serious Ymahkah adjustment!!!!!!!

If it would have been any other guy, Annie would have laughed it off. She got upset because it was Andrew. I saw it, & i guess i must have missed something beacuse i thought he was harmless & she was laughing. BTW, its spelled yarmulke!

Enzo is in full blown paranoia mode. He is quickly becoming a liability for his “gang”. He better cool it quick or he might find himself wearing on everyone’s last nerve.

I hope Annie can turn things around before the POV ceremony. I would like to see her stick around, but it isn’t looking good. If she does avoid the block, Enzo will go nutso, and that would be worth watching.

Rachel is just plain painful to watch. I really hate it when a girl thinks she is better looking and smarter than she really is, and expects everyone to agree. She acts like she thinks she is the next Janelle, but there is no comparison. Janelle was gorgeous, smart, funny, classy and humble, and Rachel is none of those things. Her laugh is so phoney I want to rip my ears off every time I hear it. She is going to hurt Brendan’s game and if he was smart, he would see that and either cool the showmance or let the HGs vote her out. Maybe I just really want her to be the first to leave.

I was thinking Kathy might be the mole, but now my money is on Brittnay. She is one sneaky little manipulator and she still comes off as being a ditsy blonde. She seems to make the rounds stirring the pot with everyone, throwing rocks and hiding her hand behind her back. I really don’t think the mole is a guy.

I have to say that the HG that has surprised me the most is Kristen. She didn’t stand out in the beginning, and she isn’t drawing attention to herself, but she does seem to get the big picture and I think she is a whole lot smarter than she looks. She is kind of a wild card, moving closer to the guys than the girls.

I guess today we will see who the new nominee is. I also have to say I am not impressed with the quality of the feeds this year. They were a lot more user friendly last year.

I have to agree with Chloe, Im torn between Brittany and Annie bieng the mole. Brittany is all the things you dont want your daughter to be and that scares me. She isn’t even hot, but she walks around the house like her shit don’t stink. I dont agree about Rachel tho. She is annoying but I honestly believe she has good intentions in everything she does. She had a bad vocabulary but a good heart. Brendon is a dangerous player and I like the fact that he looks out for Ronnie, I mean Andrew. Andrew needs a new gameplan because annoying people would have worked last year but this year where there is a saboteur that gameplan is borderline reality suicide. If he uses that podiatrist brain of his he would see that. Monet has good alliances but Brittany will be her downfall. Lane called her out as the mole and she played stupid which made it even more obvious to me that she could possible be the saboteur. Kristen is my favorite girl because she is athlethic enough to win when needed and smart enough to keep her mouth shut especially being it’s only week one. Casey I mean Kathy lives on the couch outside. She is going to be a pawn alot of weeks. Its a good things she is used to handling stress because she will be up for eviction Im guessing atleast five times which could lead to her demise. Haden is too athlethic and unless he wins every other week he eventually will go home. Enzo is just crazy and when he drinks he cant keep his mouth shut but he entertaing so I root for him to a certain extent. Ragan is cool but if you hate the game in the first week then I cant put faith in you winning. Matt is a darkhorse, the genius is smart and popular, not too athlethic but not a slouch. He will make it far in the game as long as he doesnt make foolish alliances. All in all I want Kristen or Matt to win. Look forward to a great year of big brother debauchery!

I think Kathy makes a good mole. She seems the most likely to accept a $50K bonus. Doubt she would win, so why not take the role? Plus her deputy experience gives her insight into fooling others.

And my early bet’s on Matt to win. Just putting it out there. I would like to reserve the right to change my final pick as the weeks roll by!

I hope Kathy is just putting on an act because if she is a real cop, I pity the people in her town if this is her real personality.

I think its more obvious than ever that Brit or Kathy is the mole. Maybe Matt, but I don’t think he would accept just 50K. He is the kind of guy that plays for the win. If he is the mole, he is playing it brilliantly. I lean more towards Brit. She isn’t a physical threat. She has spent this week getting in people’s ears and making things up to stir the pot and keeping herself safe. She is young and blonde, and I think most HG wouldn’t suspect her being smart enough to pull it off.

And as for Rachel, sorry, but I just can’t respect someone who is supposedly playing the game playing kissy face in the first week. Same goes for Brendon, who I am starting to dislike. It tells me that they aren’t serious about winning.

My faves so far are Kristen and Matt. Kristen is hanging with Hayden, but I don’t think it will last. She could eat him for a bedtime snack. He isn’t the brightest guy in the house.

I would like to see Annie stay, but unless she turns her attitude around and exposes Brit and her lies, she is gone.