8:45am In the have not room Matt is awake. Matt keeps hearing noises and gets up out of his cot and going over to the door to listen. He waits there silently for a minute then returns to his bed, then gets up again a few times to listen. He stands over Britneys bed and listens, then gets back into his cot and tries to go back to sleep. He keeps hearing the creaking noises and sits up each time to look around the room. Matt is definitely buggin out! 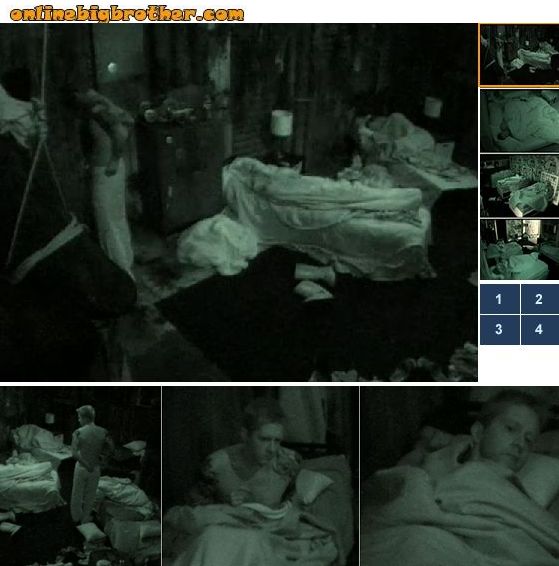 9:20am Ragan and Matt are awake, they leave the have not room and head into the cabana room. Matt says that he had to go to the bathroom and kept hearing things and wanted to go look but didn’t want to be implicated so he stayed in the room. Matt and Ragan think that they’re going to have a luxury competition today because they are on an indoor lock down. Ragan says that he wishes they would shut off the fans. Matt says I know …you would think they would cause noise with the conversations and stuff. Ragan says yeah. Ragan says that he doesn’t know what to do. Matt asks with what?! Ragan says with this situation. Matt says I don’t know, we just have to fight the best we can. Big Brother cuts the feeds to wake up the other house guests. 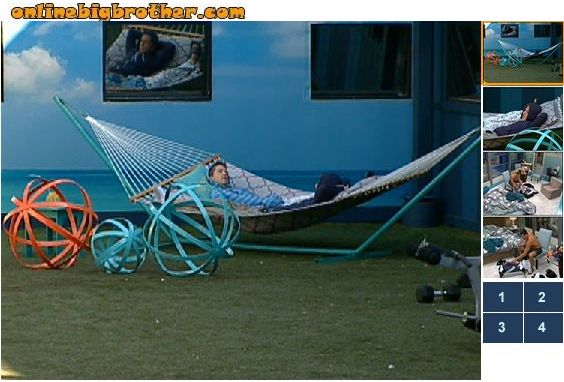 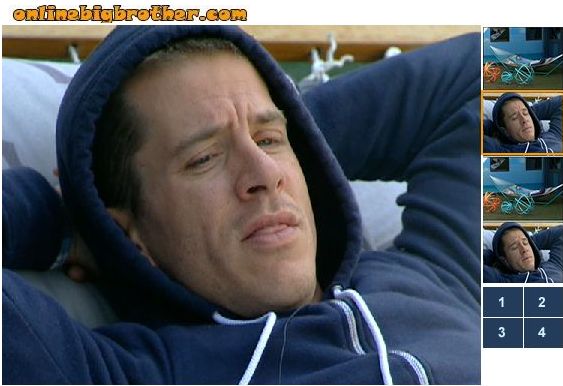 9:50am- 10:10am Matt tells Ragan that he can subtlety implicate people without actually saying any names. Ragan asks if he should talk to Brendon this morning. Matt says yeah of course. Matt says that it is a lot less suspicious if you say that I am okay …but not too much … they already think we are in an alliance.. but it is better for you to just save yourself. Ragan says that he just doesn’t want to talk to him. Matt says well it is totally different now … its no longer Brendon and Rachel… it is just him now so it might be a totally different conversation. Ragan says that he will need to talk about the emotional aspect first and then talk logic. Matt says yeah … it may at least calm down his nomination speech. Ragan says that he thinks that Brendon even realizes that Rachel’s actions were wrong after winning HOH. Matt says that it is factual that Rachel was acting f’ed up … its not his opinion …it is factual that her actions were totally f’ed up. Ragan goes through Rachel’s behavior, listing off what Rachel has done that was inappropriate. Ragan asks when should he talk to him …after he eats breakfast. Matt says yeah. Ragan says that the last person he wants to work with is Brendon …but that he wants to make sure him and Matt stay. Ragan says that he thinks Matt and Ragan are the only people Brendon can work with. Matt says that he needs to make a deal before he goes on the block …because if he goes up and wins the POV ..then he is definitely going after him …game on. Ragan says that they key to explaining all of this is telling Brendon that after Rachel did what she did it was impossible them not going up. Ragan says that the best argument is saying that both him and Matt do and say what they are going to do … for the good or bad  …but at least he knows what they are going to do … where as other people you just don’t know.  Matt agrees..  Big Brother asks them if they have changed their batteries yet.  Matt and Ragan get up and Matt says if you already know the answer to that why are you asking you condescending fck!  Matt then says just kidding big brother you know I love you…

did you resolve the crashing problem from last night simon? your site went down at least 4 times and wouldn’t come back up and when it did would not take coments 🙂

I ordered a new server in a data centre closer to all the actions. things should be up and running early next week

It’s all the traffic coming to your awesome site! Kabooooom!

I know this is off topic, but are they going to let america vote someone back in? JUlie told Rachel last night that she might come back or something and they didn’t out the brigade.

Brendon has to put Ragan and Matt up.
Go Brendon.
It sounds like the brigade are breaking up which will make for some good Big Brother action.
It is looking like the house has divided again with Brendon, Hayden, Enzo and Kathy against Matt Ragan, Brit and Lane.
Its about time something happened.
Go team Enzo….
Let the fun begin..

If Brendan would not have won HOH, would Ragan be trying to explain all the back and forth of his supposed friendship w/Rachel and why he walked away as a friend? Of course not, he is trying his best to save himself. If that is not “obvi” to Brendan, then he is truly not that smart. We will see who Brendan puts up…..but he needs to keep in mind, your friends, (if you can truly have them in the house) are not those who treat you well when your HOH and crap when your not…..hope he gets that.

WOW Robyn did someone forget to take their happy pills today……………… Take the whole bottle please.

i hate brendan!! she has to go home next week..she is such a bully who only picks on the weak..enzo lost all of my respect kissing up to the person in charge..what a let down enzo, i thought you were a real man……i am so happy tranny rachel is gone and she better stay gone!!! what was julie talking about “she may go back into the house”..no way, not cool to fix a show like that..she is gone..farewell boy george with your fake crying, screaming into the camera, and crazy eye stare downs….brendan has a va-jay-jay instead of a pee pee

give me a break
Reply to  kitty

Bully he is not he stood up for his woman and himself they are the ones that started it so when you say things back to people it dont matter what size they are it is age that makes the difference and they are suppose to be adults so know it is not bullying. And the bigger people only said things behind their back that is why they never said anything to thim. So get your facts straight. Yes he drove me crazy because of the way he acted puzzy whipped and wanted to go out of the game instead of Rachel but all in all if you look back to even when Rachel won hoh the second week he is the one that kept telling her not to bad mouth people even when they were alone. YOU HAVE TO STAND UP FOR YOURSELF AND THE ONE WHO IS YOUR TRUE FRIEND.

Here’s my take on this. Social Butterfly Enzo and Sleeper Cell Kathy should be the ones on the block. Neither have done anything this season. Both go around clinging to the power holders and they stir up shit. Enzo totally lies to Brendon/strokes his ego for no apparent reason at times and Kathy does nothing but chimes in with niceties to keep herself from being seen as a potential nominee. Put those two up and you’ll guarantee one goes home because neither could win a comp to save their lives.

You are a moron.

Agreed. Total moron. Just like enzo. They must be related.

Matt is a looser. How dare he make up a lie like this about his wife. I really hope he is out this week. I hope brennon, Enzo, and Hayden make it final 3. Britney is such a liar, she has done nothing but talk bad about Rachel. I hope Britney or Matt gets evicted this week…Please BB12 send a guest back into the house in a couple weeks. Canada loves BIG BROTHER!